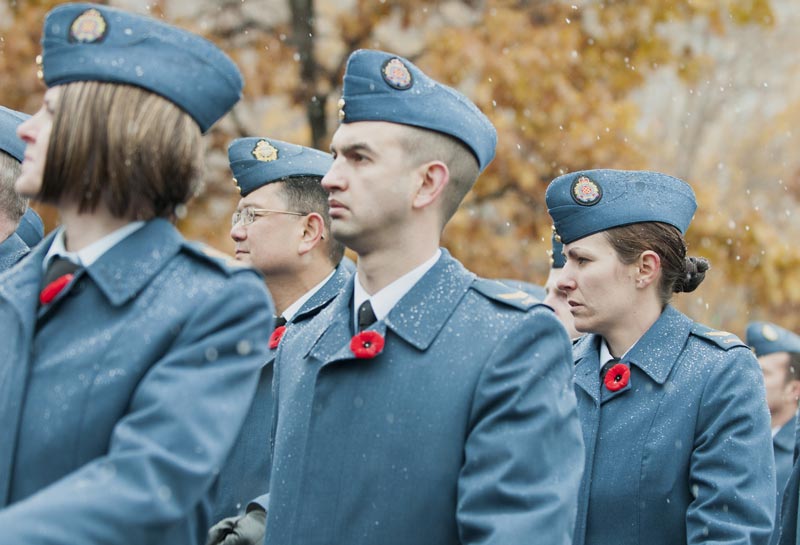 The first two notes of the “Last Post” comprise the musical interval of an ascending fourth, hopeful bugle tones that are shredded by brutal north winds and muted by a pall of wet snow that enshrouds Ottawa’s National War Memorial on this somber and significant November morning.

And the veterans listen, shivering in winter’s first assault, in the shadow of heavy clouds, the sun’s rays watery and ineffectual.

That tepid sun spells disappointment at the nearby Canadian War Museum. Walls are crooked inside, galleries are designed to disorient. There is but one place where lines are true: Memorial Hall. Here in the Hall is a lone window. When the sun is shining, its rays spotlight the headstone of the Unknown Soldier on the eleventh hour on the eleventh day on the eleventh month of the year.

Today people must use their imaginations to remember.

I don’t know what these veterans back at the War Memorial remember. I don’t want to share their memories. But I want them to know that I remember – along with twenty thousand more people here, shivering in sympathy.

The bugler doesn’t shiver. She continues into the next arpeggio, tones sweet and shrill and angry all at once. In how many places will it be played today? How many more times?

What memories for a lady standing beside the Governor-General, who remembers the news of the death of her youngest child in Afghanistan like it was yesterday? In a few minutes she will be the second person to lay her wreath before the memorial. In a few minutes pain without succor will yet again envelop her.

My mind wanders during the brass dirge. I play out in my mind’s ear countless hymns that choke me up and provoke tears, funeral marches and rousing patriotic songs.

But no melody is sadder than this one.

And then there is silence.

Or near silence. I call to mind a Buddhist riddle: what is the sound of one hand clapping?

What is the sound of the silence of twenty thousand people, of an entire city that stops to remember?

It is the sound of a restless leviathan, the omnipresent cacophony of civilization – distant cars and trucks, the clanging of flag halyards. It is, like an ostinato chord, the distant tolling of bells.

The sounds you hear in the War Museum are equally evocative. In Regeneration Hall are chilling moans – the taped sounds of keening wind. They do battle with the melody of a choral hymn coming from LeBreton Gallery. Here on Remembrance Day a medley of choirs performs, heavenly sounds from as stage guarded by the hellish gun barrels thrusting pugnaciously from a battalion of tanks. 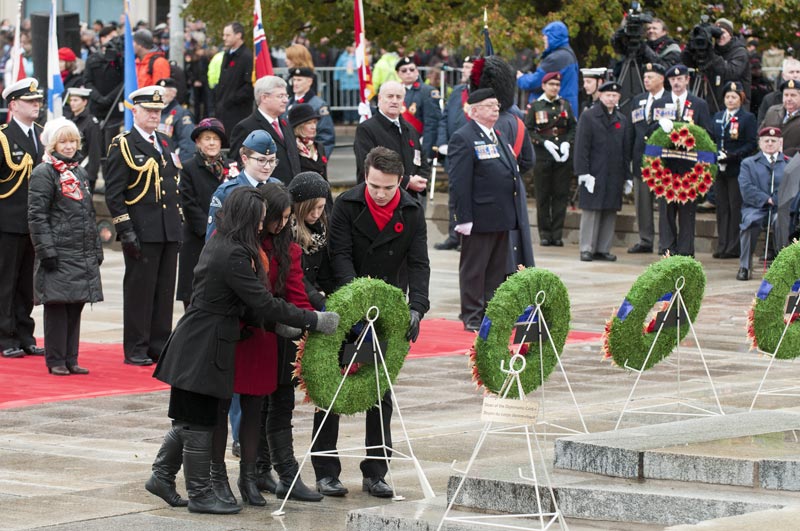 Back at the War Memorial the end of silence, when it comes, is a shock.

There is a sudden report, a blast so loud I feel it in my body. Gray smoke rises up from beside Parliament Hill. For the next while it will happen again, over and over. Twenty-one times. I try to brace for it but I can’t. I am transported to a battlefield, I am pummeled by a metaphorical artillery barrage.

Now a piper plays, a lament for the dead. It is the loneliest sound I have ever heard. I imagine the moans of disembodied spirits, of blood lusting banshees. It is a sound that stands in for the agonized cries of casualties who died alone.

Four planes fly over. Low, fast. I think of different fly-pasts, I wonder how it would feel to be on the ground beneath them were they carrying ordnance.

In LeBreton Gallery, at the War Museum, an actual fighter plane, suspended, seems to soar threateningly overhead. Bombs, torpedoes, designed to maim and terrify, are displayed nearby.

Outside the gun continues – randomly and wantonly.

The dignitaries step forward even as a choir sings and the Central Armed Forces band plays. One by one, they lay their wreaths. Emotions press against my chest as the music continues.

And still the cannon roars.

We retreat to the street. Pipers lead, veterans march or shuffle or limp or are pushed in wheelchairs. The crowd behind the barrier applauds.

For a moment my spirits are lifted. I have journeyed here to do this once, to pay my respects as part of a national institution. I have fulfilled a long-ago promise I made to myself to stand one day with the faithful in the National Capital.

But then my heart grows heavy. Bringing up the rear are the youngsters. Sea Cadets. Air Cadets. Army Cadets. I feel a sense of bitterness. I wonder at their future.

And then I whisper out loud words that I thought I was only thinking. 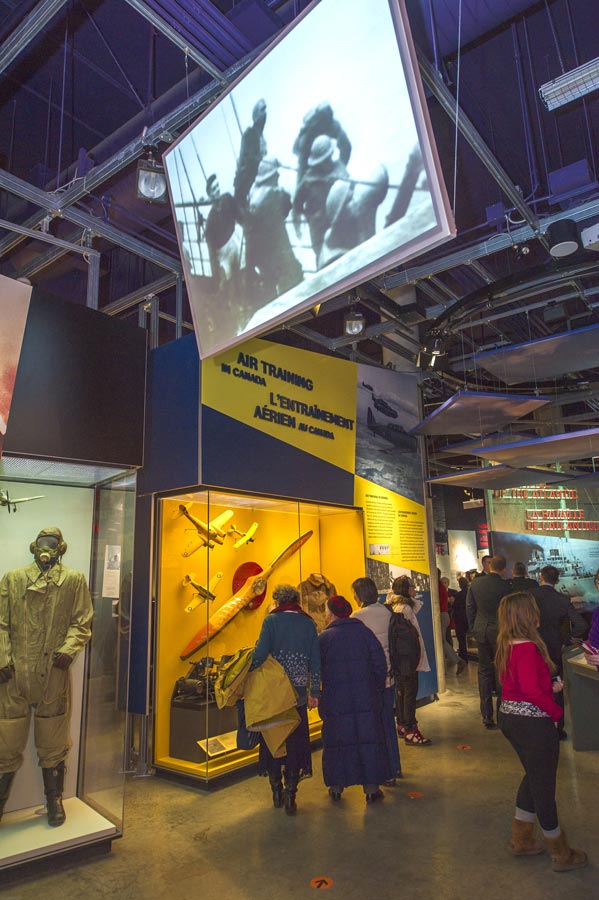 NOTES
– For information on making the Remembrance Day pilgrimage, including fascinating background articles and orders of service, log on to www.legion.ca
– For information on War Museum special activities – admission is free on Remembrance Day; for two days they post a webcam in Memorial Hall that you can view online; special activities range from choir presentations to actively serving armed forces representatives on site – go to www.warmuseum.ca
– If you want to add other activities to your journey of tribute check out www.ottawatourism.ca
– A hotel replete with history, convenient to the War Memorial and an unofficial marshaling area, Fairmont Chateau Laurier hosts a free lunch for veterans who attend the ceremony. It’s also downright elegant, the perfect Ottawa pied-a-terre. To book go to www.fairmont.com/laurier

Here at Roadstories we’ve been sitting on this story for almost a year since Mark and Sharon came back from Ottawa and the Remembrance Day ceremonies in 2013. We like to post about this remembering: check out Remembrance Day, Canadian War Museum, poppies & John McCrae as well as In Flanders Fields and our pieces about Billy Bishop and William George Barker, the WW1 flying aces. You can also see some of Mark and Sharon’s other work on their website at www.travelwriteclick.com  – Glenn

Leave a Reply to Mark Stevens wins award for “Lest We Forget” in Roadstories.ca Cancel reply

Previous
Hockey and Rink Burgers
Next
Outdoors in Canada