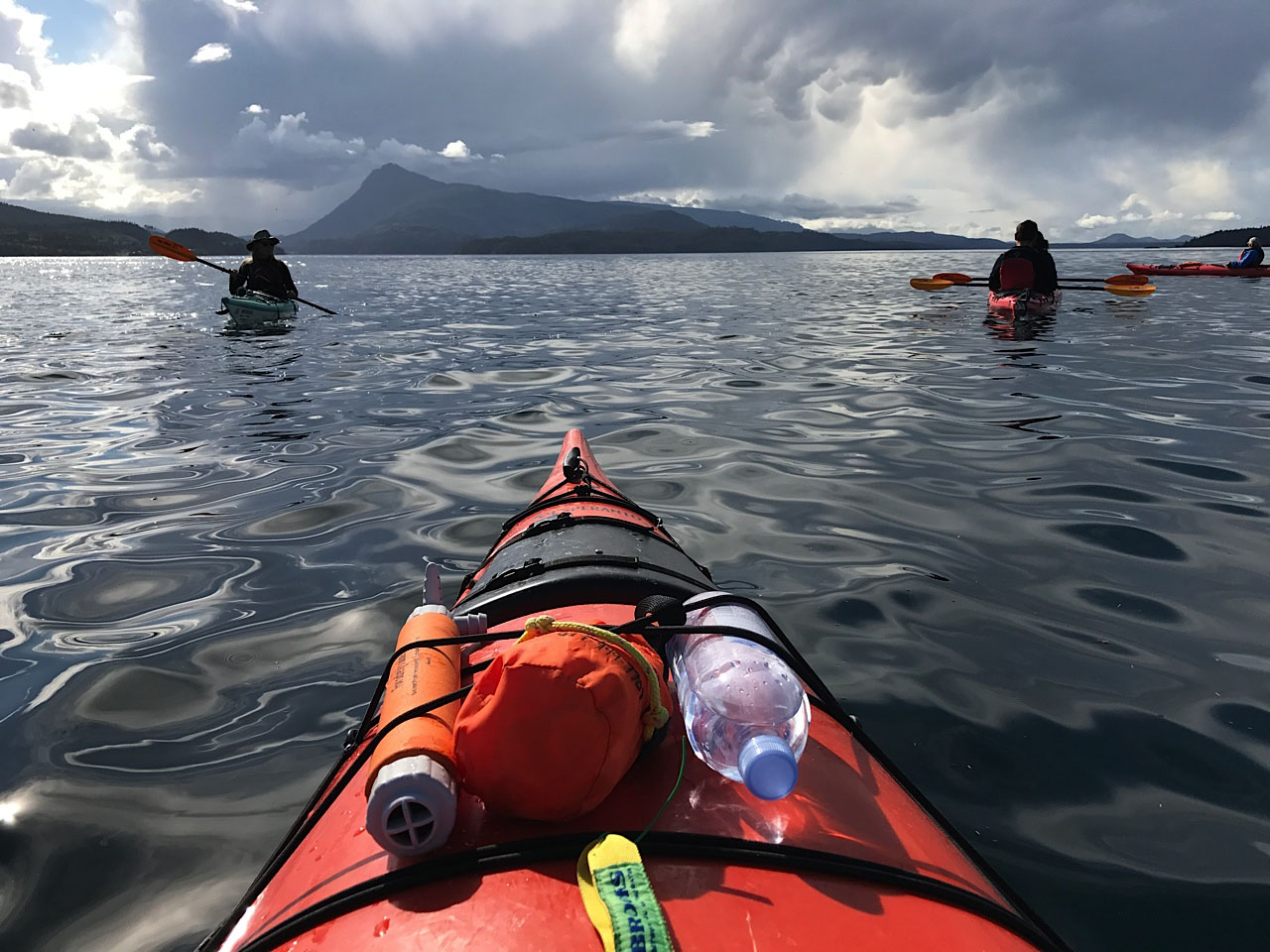 As I paddled my kayak across Johnstone Strait towards Telegraph Cove, the wash of a passing boat gently rocked me from side to side. Sunshine danced across the inky blue waters as a flock of common murres bobbed nearby. Suddenly, the water parted in front of me and a glossy grey back emerged from the depths, a large blow splitting the cries of gulls and shooting up a giant mist cloud. “A humpback!” I squealed as the whale slipped back below the water, fading mist the only visible evidence I had just encountered a bus-size creature. 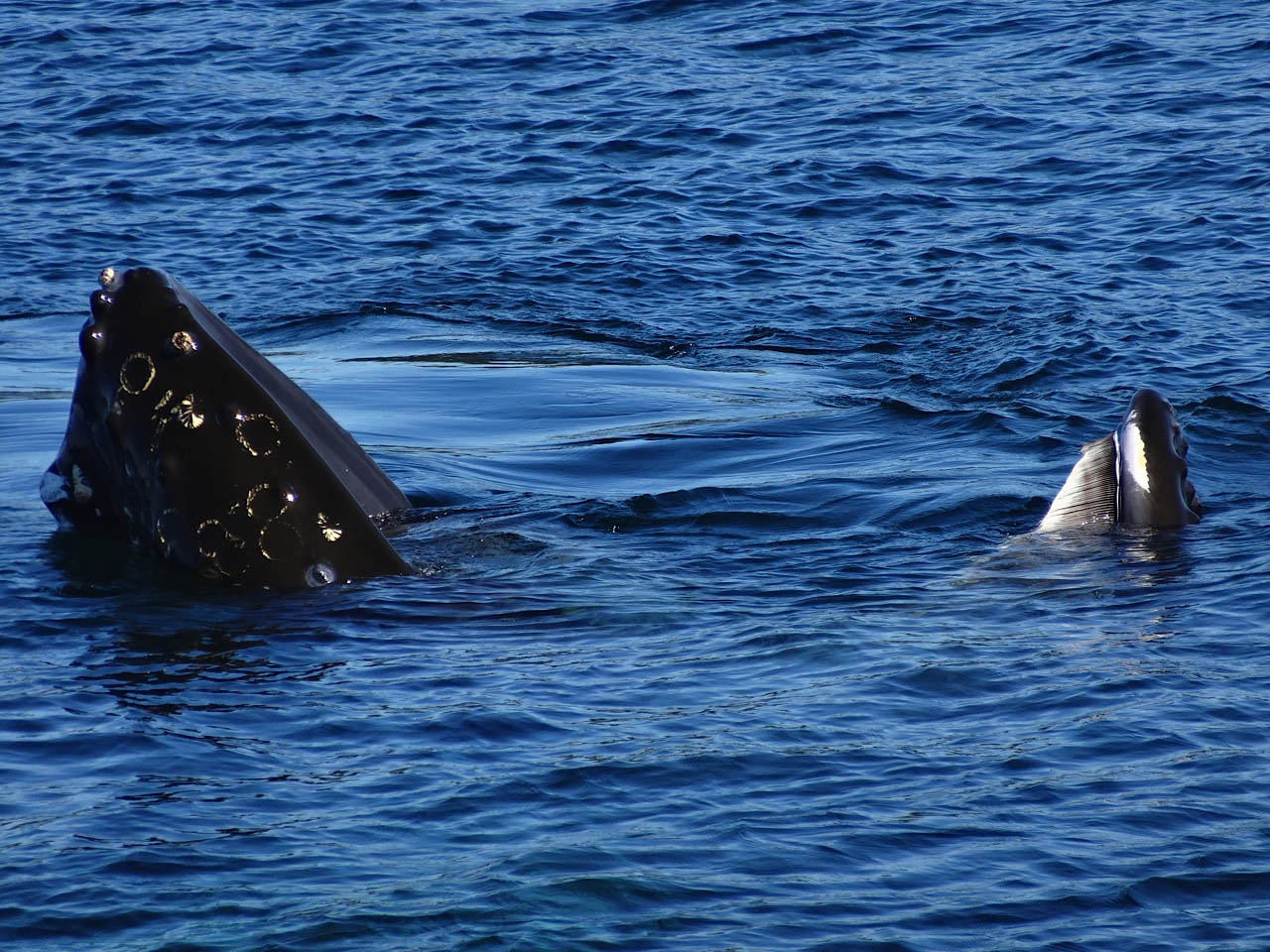 Humpback whales feed near the surface increasing the chance of collisions with boats.
. . . . . . .

Residents along Vancouver Island’s northwest coast have seen a resurgence in humpback whale populations in recent years. Unfortunately these gentle denizens of the deep don’t have biosonar in the way a killer whale does and surface unexpectedly in front of boats (like I discovered in my kayak). At least two collisions between whales and boats were reported off the west coast this year.

As I paddled back to Telegraph Cove I spotted a red clapboard building near the harbour’s narrow opening, a bright-blue sign proclaiming it home to Johnstone Strait Killer Whale Interpretive Centre and The Whale Museum. Seeing the direction of my gaze, one of my fellow kayakers suggested, “If you have time, visit the whale interpretive centre. It’s very interesting.” 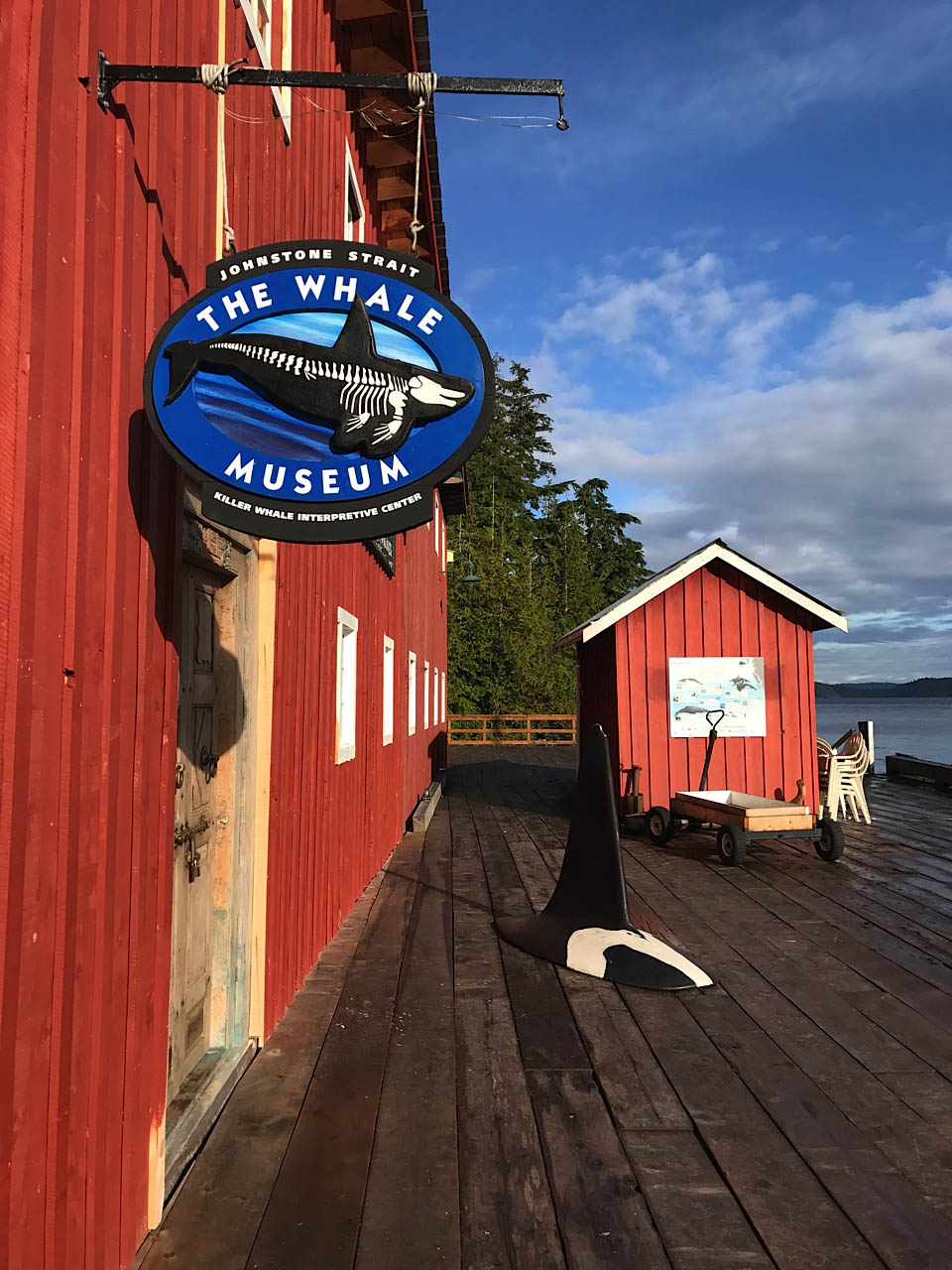 Pulling my kayak onto shore I regained my land legs and wandered through one of the last wooden boardwalk communities on northern Vancouver Island. Vividly coloured yellow, blue and green historic buildings have been restored as tourism accommodation and restaurants. At the end of the boardwalk is the Whale Interpretive Centre operated by the non-profit Johnston Strait Killer Whale Interpretive Society.

I walked past a carved wooden door that would have looked at home in Zanzibar into a room with enough whalebone to make a Washington, D.C. museum blush. An 18-meter skeleton from a fin whale (struck by a cruise ship in 1999) stretched across the ceiling of the building and a sea lion skeleton stood nearby. I walked between jawbones of a blue whale tall enough to arch high over my head and admired the compact frame of a killer whale floating near the ceiling. 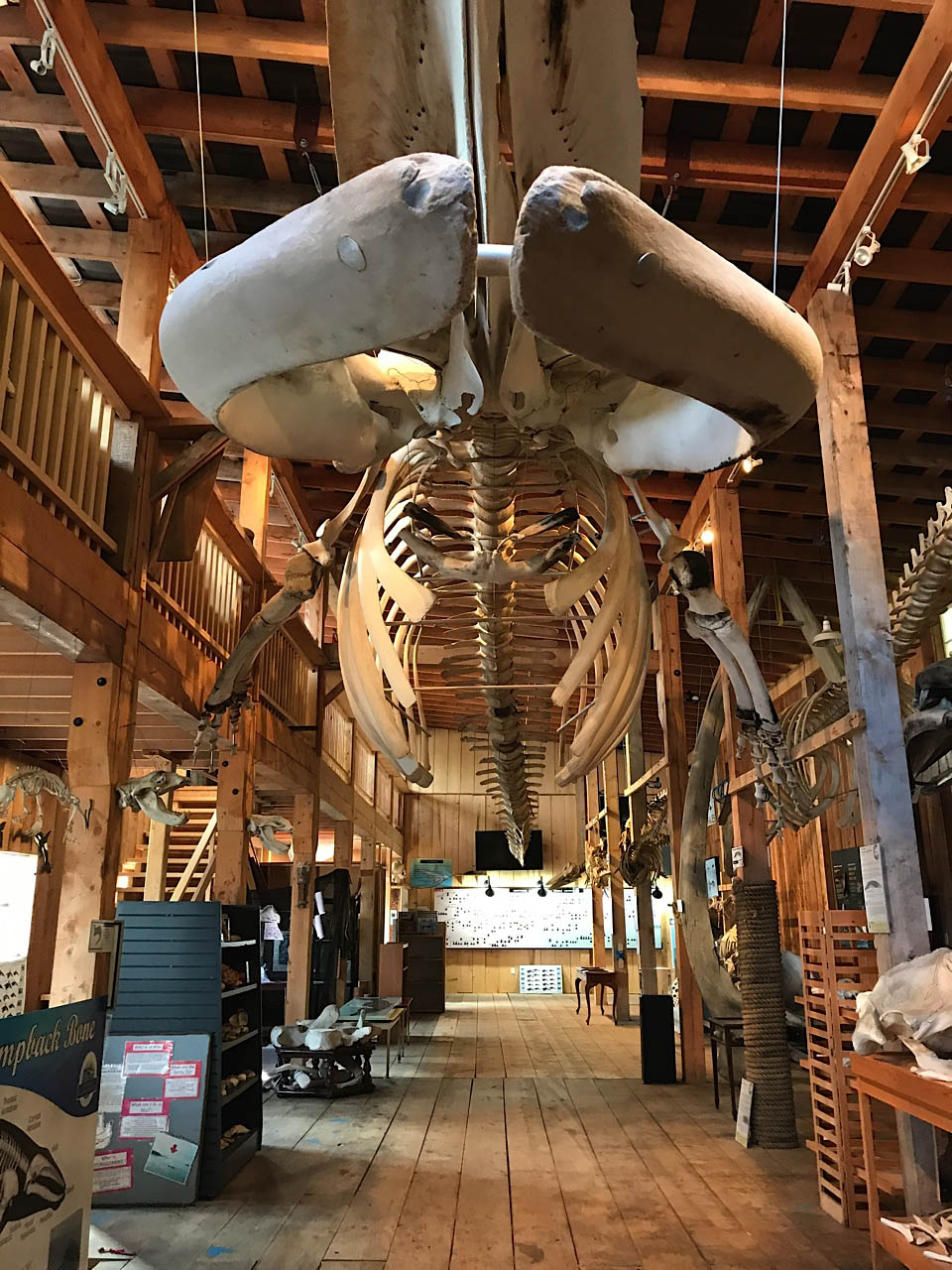 Despite its remote location, the WIC has one of the best marine mammal displays in British Columbia, not surprising when one considers the talent behind its creation. Dr. Michael Bigg (the fellow who devised killer whale identification methods) chaired the committee recommending the establishment of an interpretive centre on the north island. Jim Borrowman, who started B.C.’s first whale watching company is a director and his wife Mary, a skilled fundraiser. World-respected scientists Dr. John Fort and Lance Barrett-Lennard, Marie Fournier and Robin Abernathy are also board members and help identify specimens that might fit with the collection.

When a killer whale matching the research records for T44 died, Graeme Ellis from the Department of Fisheries and Oceans contacted Borrowman about retrieving it for the WIC.

Borrowman steered one of his boats down the coast, attached the carcass and towed it back to a beach near Telegraph Cove. (Campbell River’s Pacific Cachalot donated the towing for the WIC’s fin and humpback specimens at a cost of several thousand dollars)

Borrowman put out the call for volunteers to prep T44 for display and an army of slicker-covered citizen scientists showed up to help researchers perform a necropsy, gather DNA data, and prepare the skeleton for display. It’s messy and strenuous work. 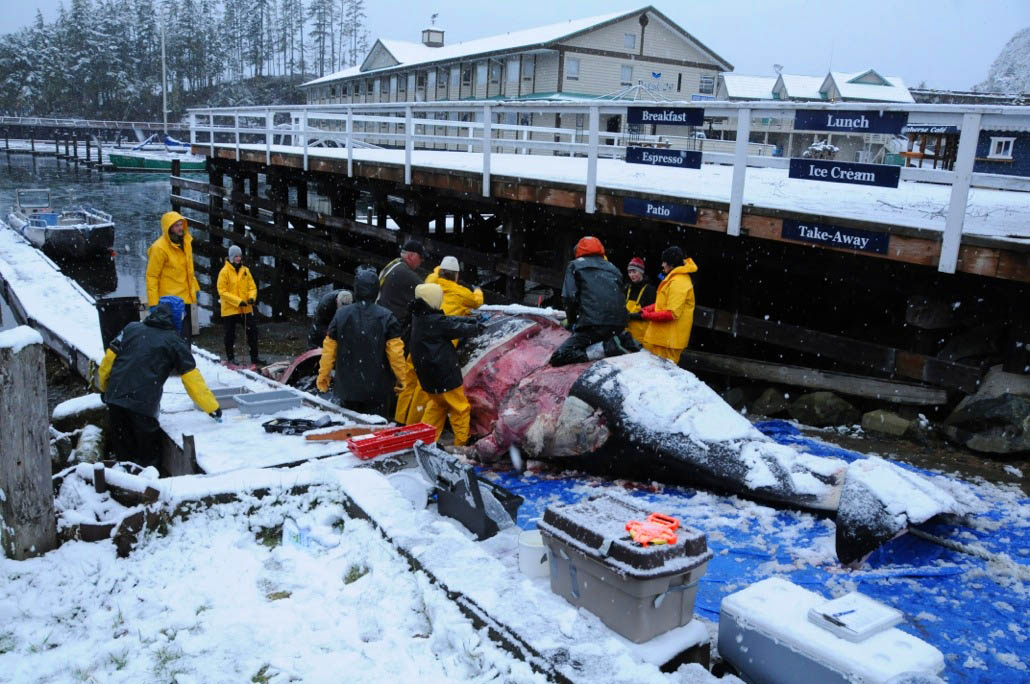 “You cut each bone one at a time off the animal and get them as clean as you can,” explained Borrowman, “Then we tie the (big) bones together (and put them in the ocean) and we let the microorganisms feed on the flesh that is still there.” Small bones are submerged into the ocean in a barrel so nothing is lost.

Because this killer whale was discovered shortly after it died, it could be identified from its markings. T44 was thirty-two years old (old for a male killer whale), and a Biggs (transient) orca. Biggs eat only marine mammals so it wasn’t surprising when T44’s stomach revealed more than 300 seal claws and elephant seal flipper tags!

Once the bones of T44 were clean, the job was turned over to Salt Spring Island’s Mike deRoos, one of the WIC’s first employees and now a master skeleton articulator. Unfortunately, not only is getting a whale carcass to Telegraph Cove difficult, but getting the bones to deRoos several hundred kilometres south is harder than calling a courier company. 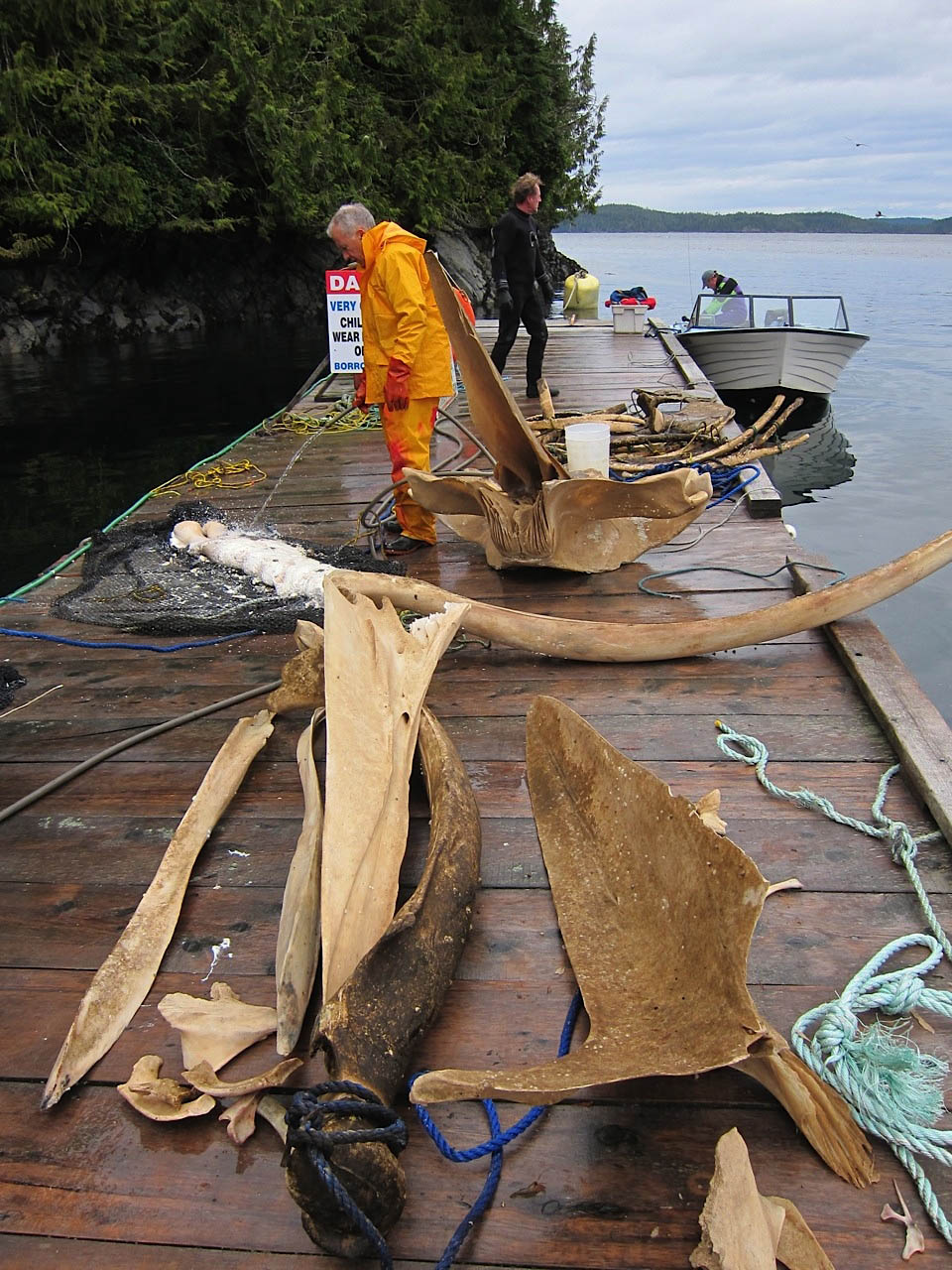 “How do you get a pile of whale bones down island?” I asked Borrowman. “I put them into a four by eight foot trailer and a six by six foot truck box. Then I put plywood six feet up the sides,” he replied. Borrowman then stacks up the bones and hits the road with a whale of a load!

I wondered if he ever encountered trouble transporting whale bones. “I guess I could have some explaining to do if I was pulled over with a truck full of whale bones,” laughed Borrowman but since he has the proper permits it would probably be a short traffic stop.

As I wandered over to the Whale Interpretive Centre’s mural showing Northern Resident killer whale relationships (sort of like a killer whale family tree) Gordie Graham, a towering force in this community of less than a dozen full-time residents, wandered in. Graham is the owner of Telegraph Cove Resort and donated the building for the WIC. 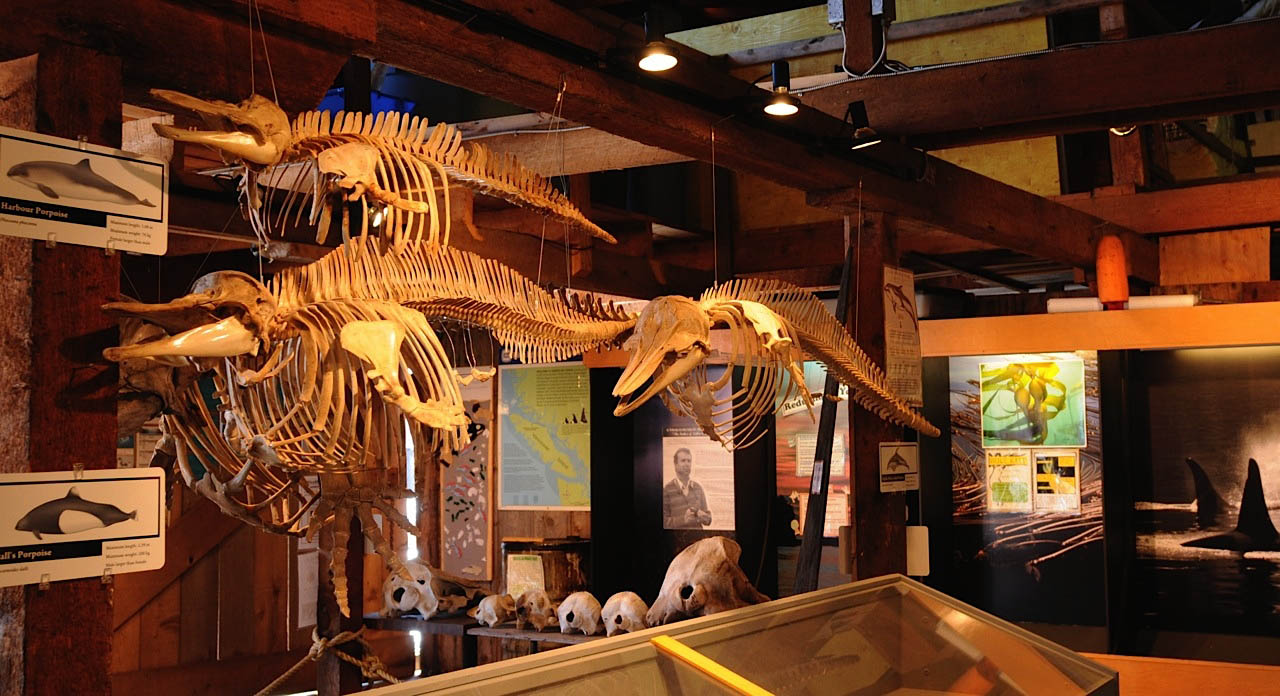 At an age when many would be kicking back in a rocking chair, Graham continues to expand, spending last winter adding another floor to the WIC. “I heard you used to be able to see the ocean through the museum floor,” I queried as I patted Graham’s suspicious canine companion, Sally. “You still can when the water level is high,” laughed Graham as Sally barked at the hand-planed floorboards, “What do you see, Sally? Raccoons?”

The raccoons may have been the only wildlife breathing in (or under) the WIC but there was a sense of movement in the skeletons under these rafters. “One of the main reasons we have the museum is to try to make people aware of how incredible these marine mammals are. Once people learn about the natural history and the environmental threats then they become great supporters and the world’s a better place.” Borrowman explained. “We try to give the whales a second life.”

As I gazed in awe at the skeletons that had taught me more about the humpback I had seen earlier, it seemed the WIC had succeeded.

The Whale Interpretive Centre is open from May to September, other times by appointment. Admission is $5.

Try a more intimate whale watching experience by kayaking among the whales with North Island Kayak.

Stay in a historic cabin at Telegraph Cove Resort on the boardwalk and look for river otters after day-trippers have left. 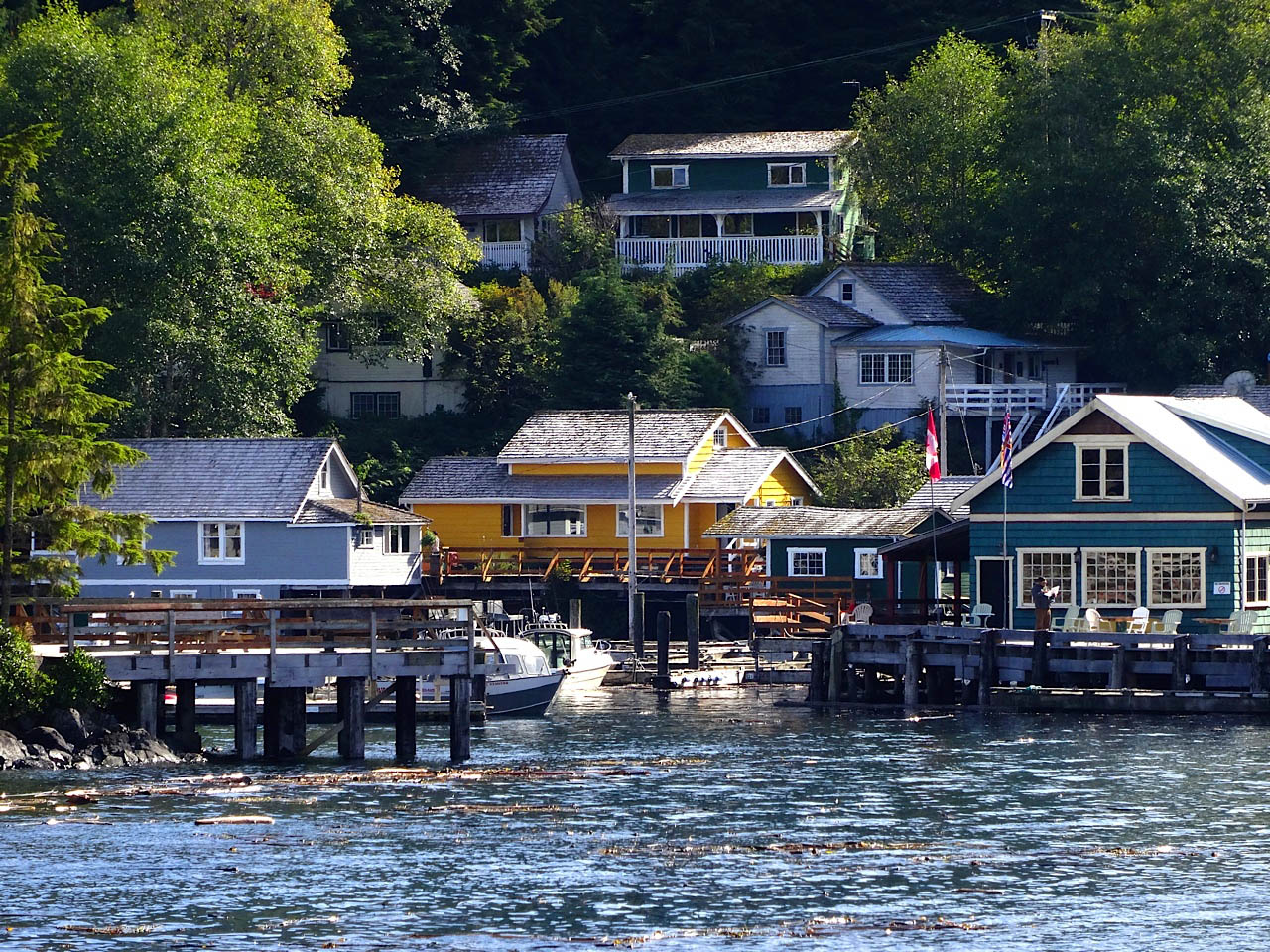 Telegraph Cove is one of the few remaining boardwalk communities on Vancouver Island.
. . . . . . .