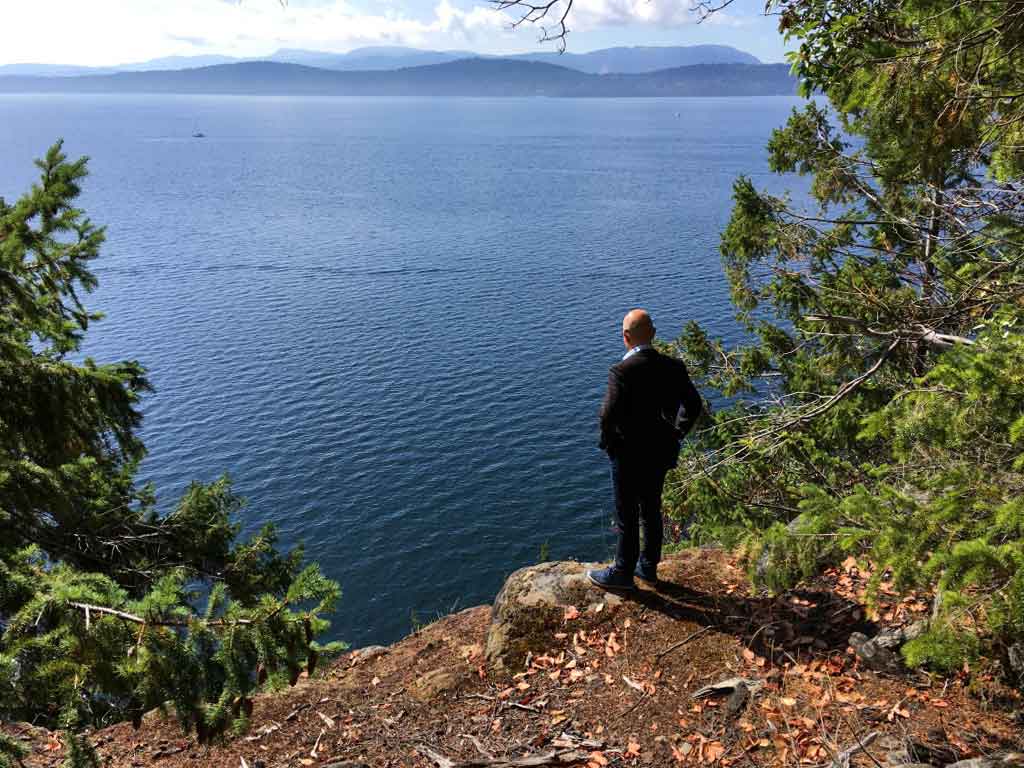 “There is a deep connection between all things. Humans are not superior, and are basically no different than salmon, bears, trees and even rocks. All things are equal, all have spirits,” explains Adam Olsen. “We need to rebalance our perspective; each part of the ecosystem is incredibly important.”

Adam Olsen is an unusual guy. First, he is Indigenous, of the Tsartlip First Nation in Saanich, north of Victoria, and has a Native outlook on life. His Tsartlip name is STHENEP (pronounced “hawnup”), which he inherited and is associated with reef-net fishing. “The name honours those who carried it before me,” says Olsen, “and it is my duty to bring honour to the name so it will continue.” 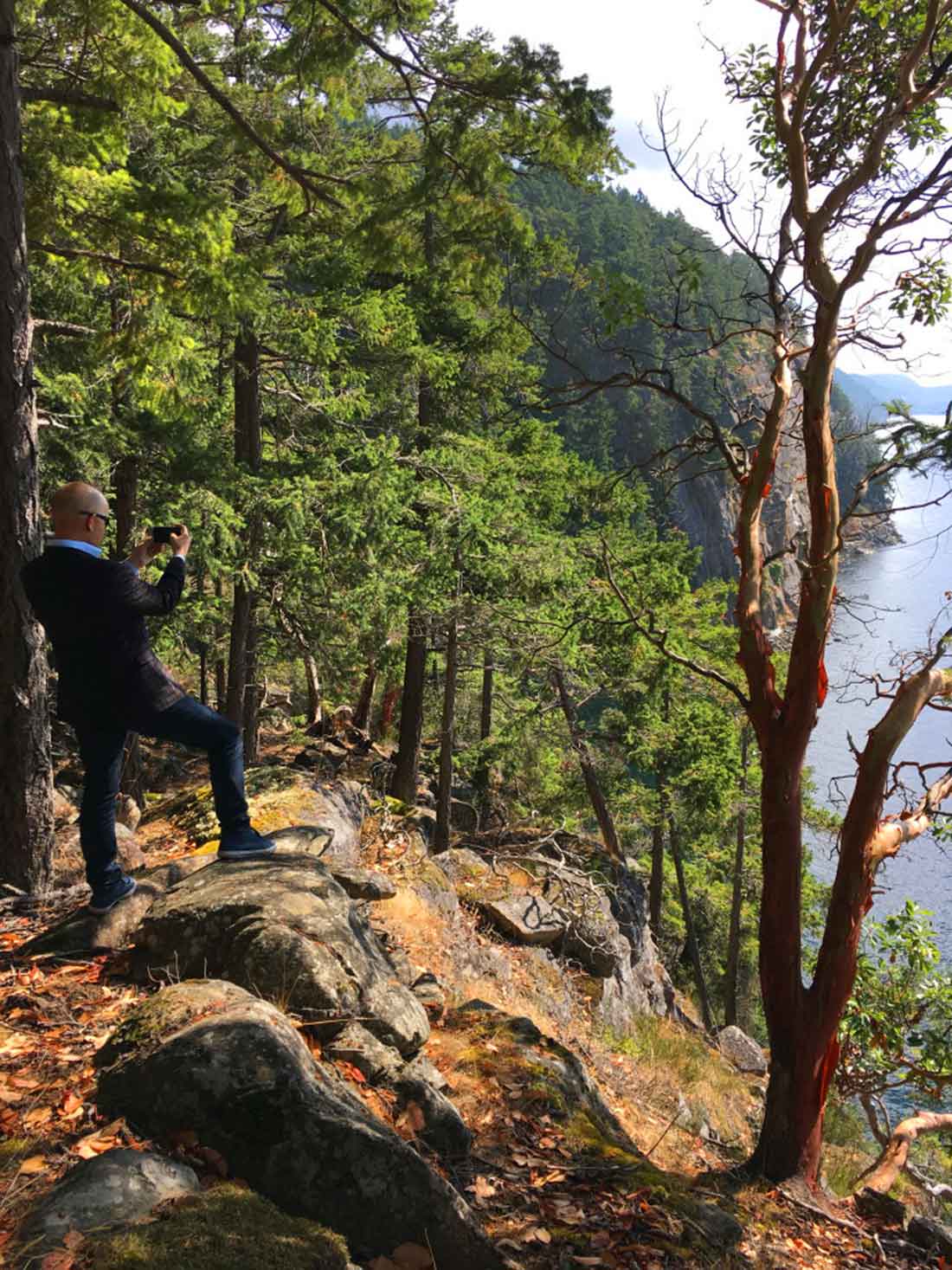 Olsen has led community efforts to protect and improve the Salish Sea and the Saanich Inlet.
– Photo courtesy of the Olsen Constituent Office
. . . . . . .

More unusual is that Olsen was not only elected to the British Columbia legislature, but he represents the Green Party. Olsen explains that he was attracted to the Greens because they have crucial beliefs that are also core to indigenous philosophy.

Adam Olsen, who grew up on the Tsartlip First Nation’s reserve, is a good looking, 42-year old with a strong build and bald head with a grey moustache and small beard. His native life includes attending sweat lodges, potlatches and naming ceremonies and listening to story-telling by elders. He speaks limited SENCOTEN, the Tsartlip language, but is learning, and advocates for the revival of indigenous languages. 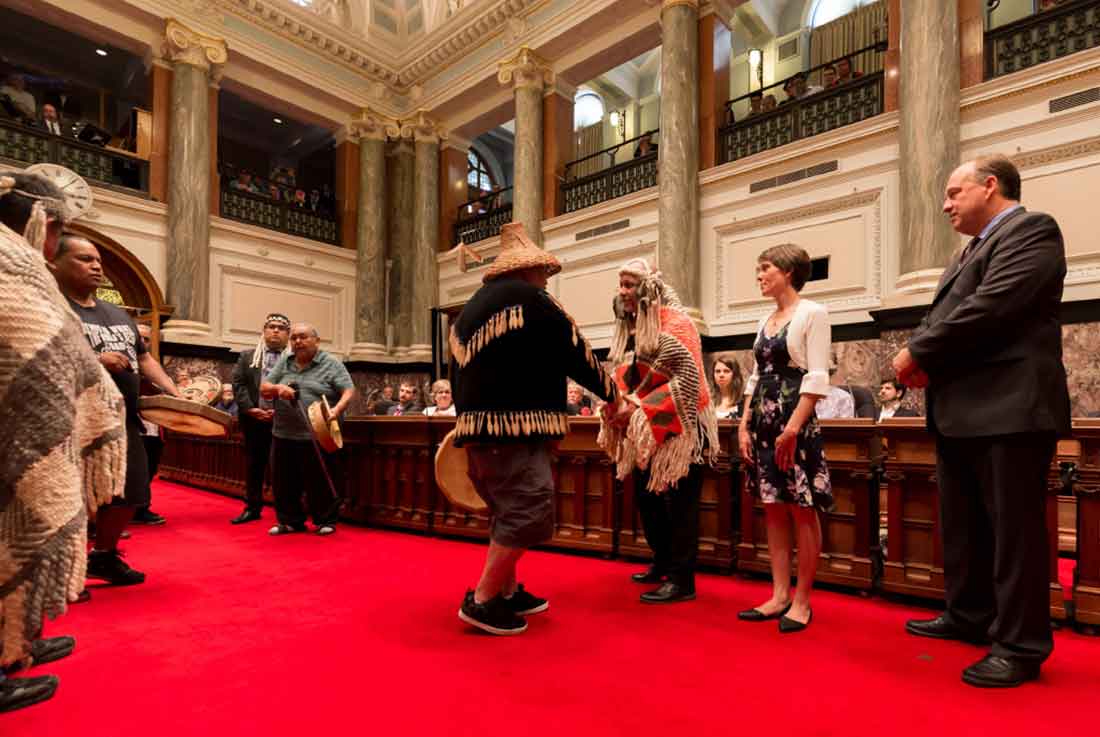 Adam Olsen in regalia with Andrew Weaver (leader of the BC Greens) and Sonia Furstenau (the third BC Green elected) getting sworn in to the British Columbia legislature, June 7, 2017.
– Photo courtesy of the BC Legislative Assembly
. . . . . . .

He is passionate in the native belief of intergenerational equity. That is, the current generation has a responsibility to following generations to leave the world a better place. “We need to start making decisions that are much longer term than what governments are accustomed to making,” he says.

Olsen attended Camosun College studying communications. Subsequently, he worked for the Victoria Salmon Kings and the provincial Aboriginal Sports and Recreation Association. Sports have always been important to Olsen, especially soccer. He played himself and now coaches his son’s team. He is proud that there are all-Native teams in Saanich. In 2006, Olsen married Emily, a New Zealander. They have two children, Silas and Ella, and live on the same property where he grew up.

In 2008, Olsen changed careers and ran for and was elected as municipal councillor in Central Saanich. “I was drawn in that direction because the Tsartlip Reserve has a highly charged, intensely politicized atmosphere. The federal Indian Act codifies the differences between Natives and non-Natives. It defines us, sets us apart. Indigenous people are very suppressed.” He served two terms. 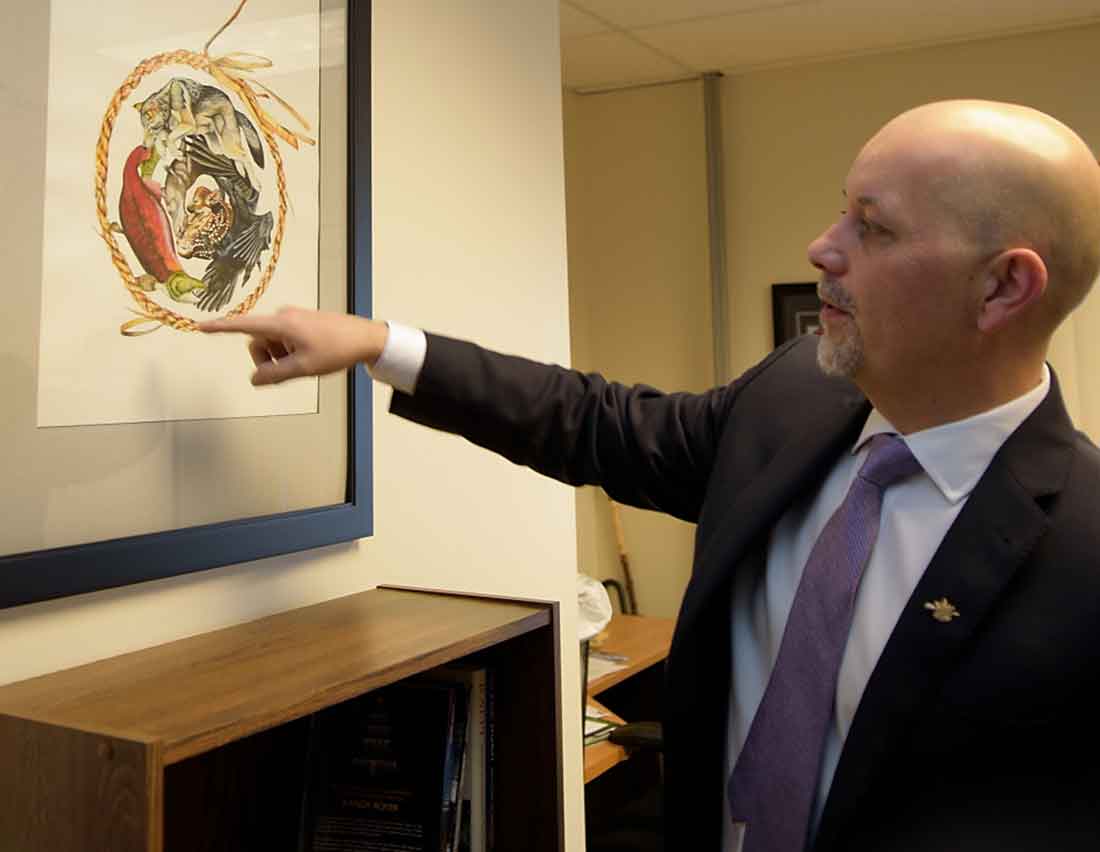 “We need to rebalance our perspective; each part of the ecosystem is incredibly important.”
. . . . . . .

Olsen entered the record books in the 2017 British Columbia election by winning the Saanich North & Gulf Islands riding, the first indigenous Green Party member in North America to win a seat in federal or provincial/state parliament. Olsen narrowly lost in the same district in 2013.

Olsen believes deeply in First Nations, his community and the environment. He is alive with energy, working 70 to 80 hours per week and, as his chief of staff says, is always seeking new ideas, new ways to achieve his goals and, of course, to make sure his Native name, STHENEP, remains honourable.

Environmental issues important to him include stopping the Site C dam, stopping the Trans Mountain pipeline, rebuilding salmon stocks and preserving old-growth forest. He started the group Show Kinder Morgan Your Food Fish where First Nations people have flooded Facebook with photos of their food fish to show Kinder Morgan the importance of protecting coastal ecosystems. “I have a salmon on my wedding ring, Olsen says. “I know exactly what salmon means to First Nations.” The recently announced Wild Salmon Advisory Council arose in large part due to his vigorous lobbying. 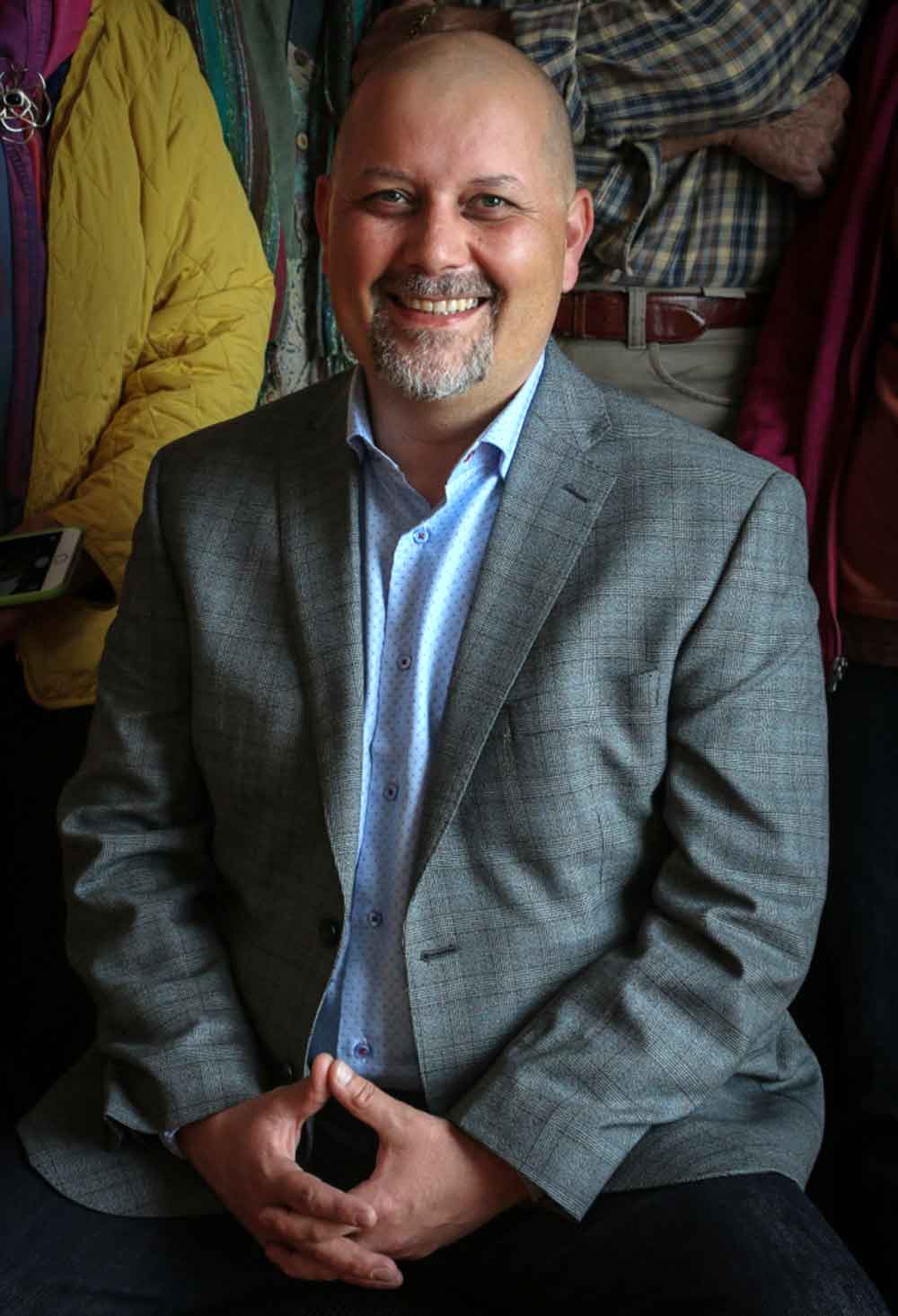 Adam Olsen is working to get First Nations issues into the legislature. There are three other indigenous MLAs (two NDP, one Liberal) and Olsen says, “We talk and I very much want to develop a native caucus.”
– Photo by Hans Tammemagi
. . . . . . .

Olsen feels strongly about the injustices Natives have suffered. “There’s been a steady march toward recognizing our past, helped by the Truth & Reconciliation report,” he says. In Saanich, there has been a growing awareness by municipal government of indigenous culture and history. Some places have been renamed and a totem was raised in Sidney. The four indigenous “villages” of Tsartlip, Tseycum, Tsawout and Paquachua are all part of one Saanich nation with a common language. “I have relatives in all four places.” I’m optimistic about the direction we’re going in,” he said.

“Last year’s celebration of Canada’s 150th birthday was a bit misplaced,” he adds. “What really counts is the next 150 years. Huge strides are necessary. We must not be overwhelmed by the large amount of work to be done. We need a continuing commitment. Indigenous people will not disappear.”

Olsen’s beliefs will serve all his constituents well.

READ all posts by Hans Tammemagi …