Upon showing her this picture, the park naturalist informed us that it was not, in fact, a butterfly, but a moth. None other than the Cecropia moth, the largest in North America!

The scientific name is Hyalophora cecropia and it’s a member of the Saturniidae family of giant silk moths. Females with a wingspan of 160 mm (over six inches) have been documented. It is found all the way from B.C. to the Canadian maritime provinces.

Long Point Provincial Park, near Port Rowan, Ontario, Canada is part of the Lake Erie beaches. It’s a stunning place to visit if you like sand-dune camping and deserted beaches. It is also world-renowned for migrating birds in the spring and fall (many of which probably feed on the Cecropia moth). Bird-watchers have spotted 383 different species of birds on Long Point itself, which is recognized as a biosphere reserve by the United Nations. 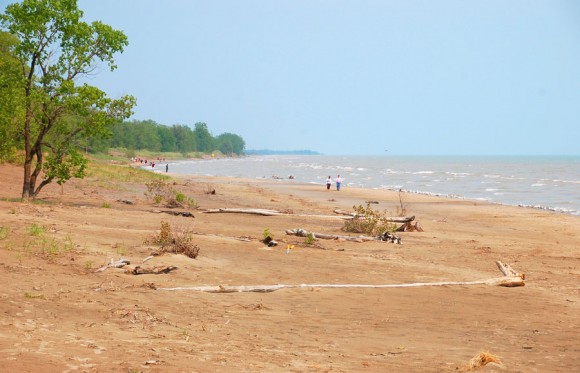 The beaches at Long Point Provincial Park on Lake Erie