The United Nations (UN) has declared 2011-2012 the International Year of the Bat, so with Halloween just around the corner, I wanted to do this post.

For centuries, bats have been associated with black magic, witchcraft and vampire folklore. But bats are in real trouble right now and desperately need our help to survive.

In North America, White-nose Syndrome (WNS) has devastated bat populations. In other parts of the world, bat habitats are disappearing. The United Nations and bat conservation groups around the world are anxious to get the word out that we need bats for a healthy world. Bats pollinate plants and disperse seed and they help control pests, with some eating half their weight in insects every night.

To understand bats better,  the UN has set up a Year of the Bat website.

Just ten minutes on YearoftheBat.org and its links and I discovered all kinds of interesting facts and figures about bats. The world’s only flying mammals represent 1200 species of bat. That’s one-fifth of all mammal species on the planet. The smallest is the Bumblebee bat, weighing in at less than a penny. The largest is the Giant Flying Fox with a wingspan of up to six feet. The Little Brown which is native to many parts of Canada and the US, eats up to 1,000 mosquito-sized insects in an hour. The Little Brown is the bat that has been most severely affected by WNS.

Here are a couple of other things I learned from YearoftheBat.org: 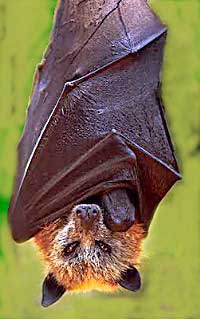 Bats often sing to attract a mate or they do a fancy wing display.

Bats live long lives – sometimes twenty years or more and they only have one pup a year. Pups are suckled by their mothers until they are old enough to fly.

I found out how to remove a bat safely and humanely from a home:  http://www.batcon.org/index.php/bats-a-people/removing-a-bat.html And, I found instructions on how to build a bat house. http://www.batcon.org/index.php/get-involved/install-a-bat-house.html These houses really do work. My mother had bats roosting between the frame and siding of her home and a bat house that we posted on a nearby cedar tree eliminated the problem.

In Canada, many Ontario Parks have bat awareness as part of their natural heritage education programming. At Rock Point Provincial Park on Lake Erie, bats are a part of the park’s summer activities. At The Pinery, a provincial park on Lake Huron, the park’s Halloween weekend always includes a Build your own Bat House session hosted by Friends of the Pinery park volunteers. This year, the Halloween weekend takes place October 22-23, 2011. Reservations are required.