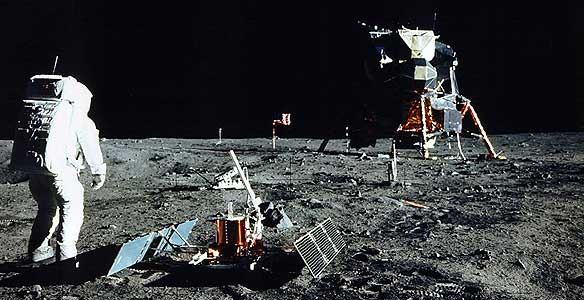 Neil Armstrong and “Buzz” Aldrin were, at that very moment, walking on that dusty surface about a quarter of a million miles away. Mum knew I was interested in what was going on up there. I had been collecting badges and scrapbooking the progress of those first American astronauts.

Today, as I listen to the F-16s and the Snowbirds rehearse for the airshow over the Canadian National Exhibition in Toronto, I hear from the Canadian Space Agency’s headquarters in Longueuil, Québec, that Chris Hadfield will become the first Canadian commander of the International Space Station. Cool! We’ve come a long way from the clunky lunar module that Neil and Buzz had to kick around in.

It will be the first time a Canadian will command the space station. He’s an experienced astronaut with two space shuttle missions under his belt, the first Canadian to walk in space, and he spent 25 years flying fighter jets in the Canadian military. He’s a nice guy from Sarnia, Ontario who’s taking his guitar up into space with him.

They’ll fly him up to the station in a Russian rocket in December 2012. Good Luck Chris.

Degrees of Canadian separation: I used to work with Philippe Garneau, brother of the first Canadian in space, Marc Garneau. Philippe’s partner at the time, Michael Wurstlin, was the designer of the original Canadian board game Trivial Pursuit.