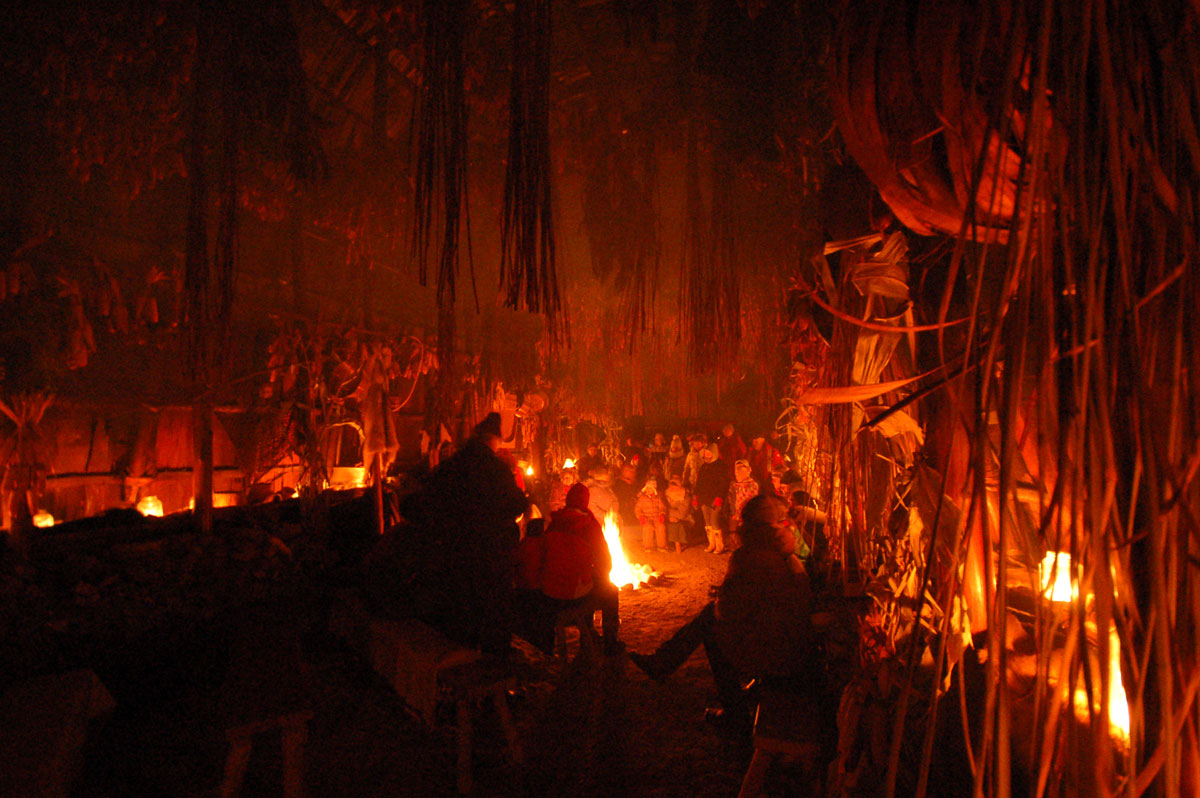 The smell of wood fires, the crunching sound of walking on frozen snow, the shuffle of boots through black spruce needles and the cozy relief of a hot drink warming mitten-clad fingers; these are the sensations of First Light at Sainte-Marie among the Hurons.

In Wendake, the land of the Wendat, near modern Midland, Ontario, First Light has a deep connection to Canada’s early history, to our first peoples and to Christmas. It’s one of many special events at Sainte-Marie among the Hurons, a re-creation of the French Jesuit settlement that existed here from 1639 to 1649. It was the first European settlement in this part of Canada, but it didn’t end very well for Father Brébeuf and the other missionaries. Today, Sainte-Marie among the Hurons is operated by Huronia Historical Parks, and is an attraction of the Ontario Ministry of Tourism, Culture, and Sport. It’s an historical site and a living museum. All of the buildings and their contents are reproductions, but at First Light, it all seems very real indeed. 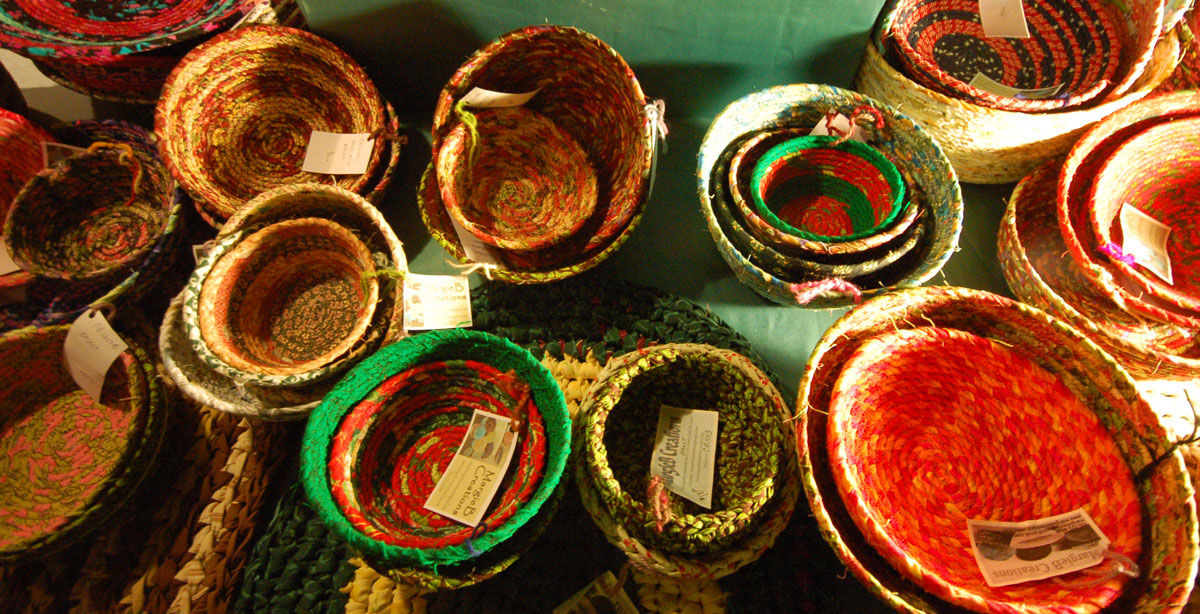 First Light is filled with good cheer and optimism. First impressions are of candle light. From the moment we turned off of Highway 12, there were candles lit – all down the hill and throughout Sainte-Marie among the Hurons – 5000 candles in all. There was a soft snow falling. It was an unforgettable sight. As we made our way into the settlement we were greeted by three coureurs de bois at a recreated 17th century encampment. They nourished us with sweet cedar tea and talked about surviving those first Canadian winters so long ago. We saw young fire-starters demonstrate how to make fire with just two wooden sticks.

We heard Canada’s first Christmas hymn – the “Huron Carol” – a haunting hymn that I first heard in grade school long ago, originally written by Jesuit missionary Jean de Brébeuf in the native language of the Huron/Wendat people…

’Twas in the moon of winter-time When all the birds had fled,
That mighty Gitchi Manitou Sent angel choirs instead;… 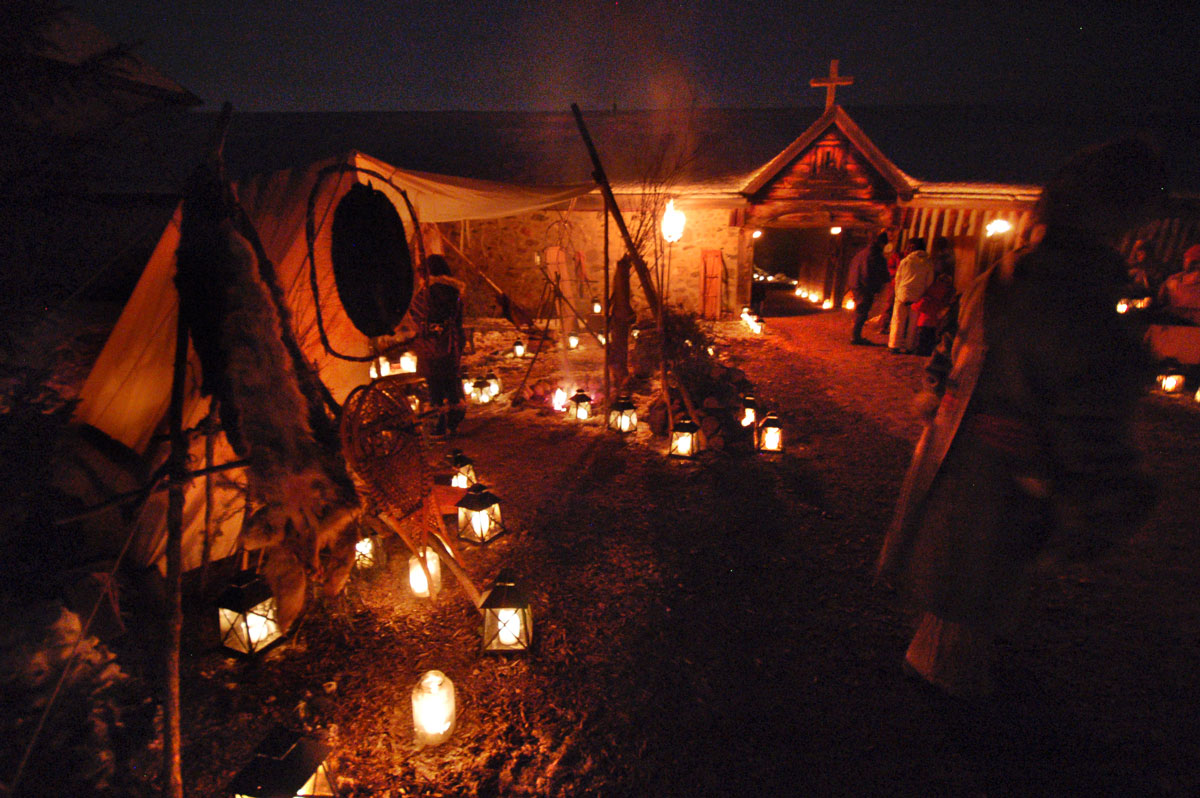 Over 5000 candles light the way during First Light at Sainte-Marie among the Hurons.
…….

Folk singers sang for us. We joined in on Christmas carols and spent time with native drummers and storytellers in a longhouse. We rubbed shoulders and traded stories with young families, couples and grandparents enjoying this annual event. We watched kids craft their own corn husk angels and write letters using quills, brass seals and sealing wax. Christmas baking and hot chocolate was plentiful. The craft fair was amazing. A couple of dozen local crafts people had really beautiful items for sale, and at a fraction of big city prices. I bought a stunning little bowl made from colourful pieces of rag woven into tight little, neat rows. We ended our evening in the boisterous clatter of the Sainte-Marie restaurant. A lively Franco-Ontarian band from nearby Penetanguishene was on stage. They were fantastic and the place literally hopped to their beat as we enjoyed our Three Sisters Soup and tourtière washed down with a cold one. It was a perfect end to a magical night.

Canadian novelist Joseph Boyden’s book The Orenda, tells a fictionalized version of 17th century life at Sainte-Marie among the Hurons. It’s a very good read; I recommend it. Here’s a review at Quill & Quire Magazine… 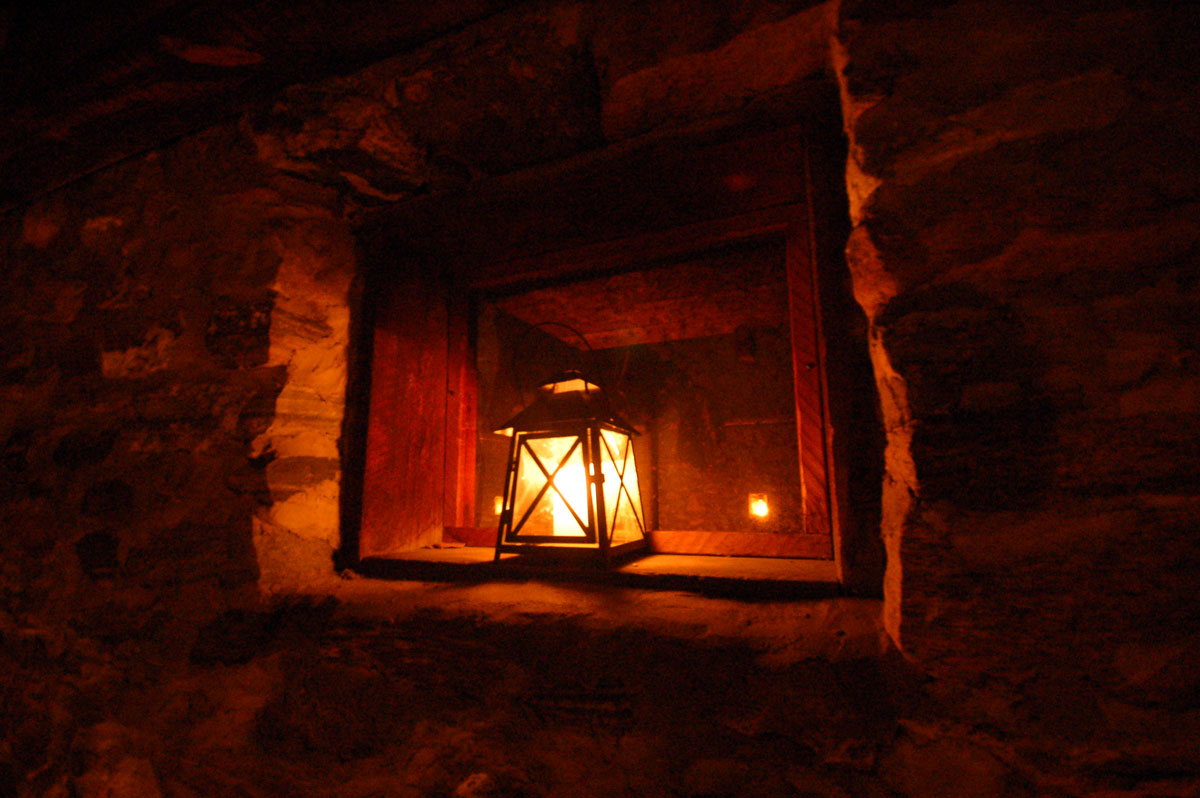