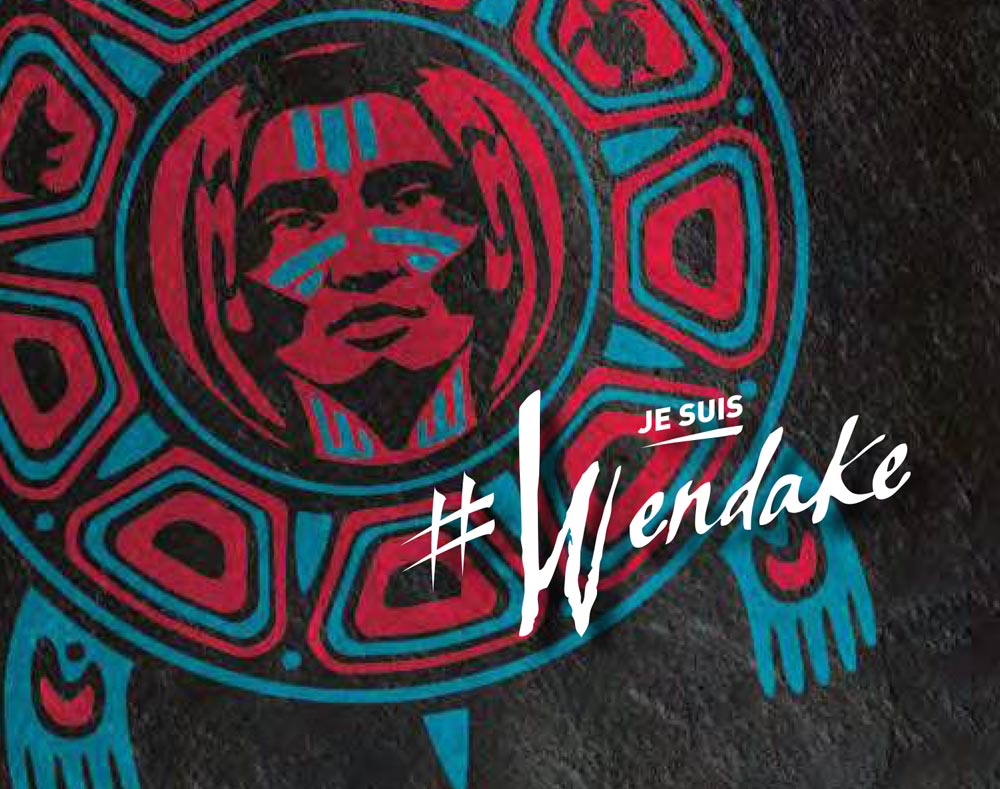 Deep in the dusk of a longhouse beside a flickering fire, Dominic, dressed in traditional garb with a large red sash and a fox pelt, tells an old Wendake story: Some children playing outside become hungry and several times ask their grandmother for food. When she keeps delaying, the children rise into the sky to become the Pleiades star cluster. Dominic sings in a deep voice and his drum reverberates amongst the tall beams of the longhouse. We are mesmerized. I feel privileged to hear this story in this traditional setting, for stories are very important to First Nations people. 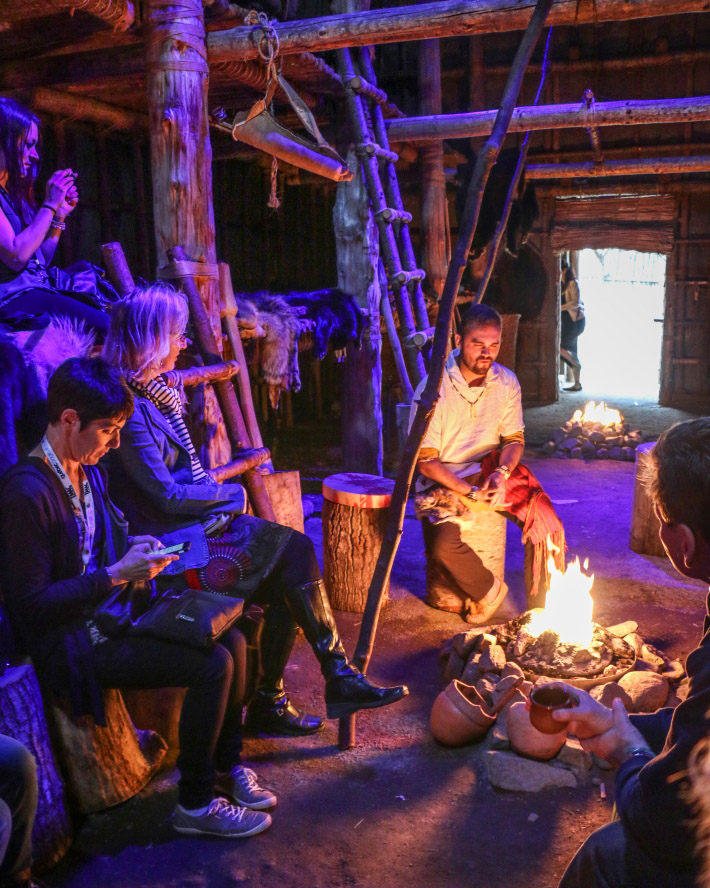 Dominic tells the Pleiades story in a longhouse on the Wendake First Nation reserve near Quebec City.
– photos by Hans Tammemagi
…….

Earlier, I had boarded a bus whose sides were brightly painted with the proud statement “Je suis Wendake” accompanied by an attractive indigenous lady in traditional regalia. Our tour group climbed aboard and we drove eight kilometres north of Quebec City to the Wendake First Nation reserve, and were soon immersed in one of the most impressive indigenous cultural centres in the country. 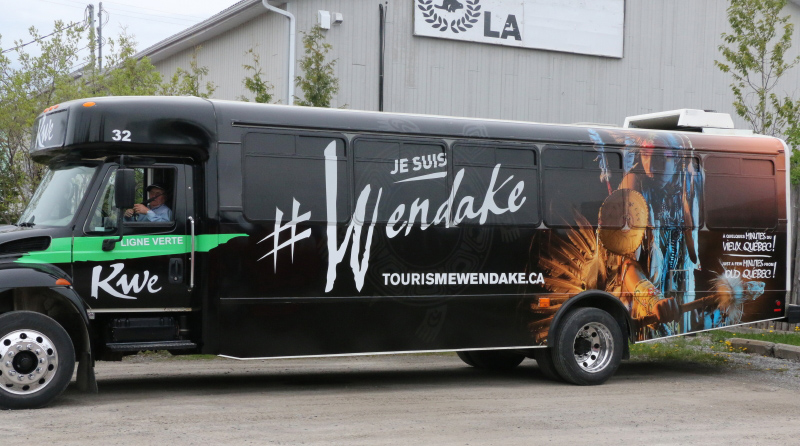 At a traditional Huron Village we entered a longhouse where Stephanie, wearing a buckskin dress, explained the old way of life of the Huron people. Surrounded by a tall crosswork of beams decorated by animal pelts, she described that the Wendake are a matriarchal society with four clans: turtle, deer, wolf and bear. We exited and passed a sweat lodge, where men discuss politics, and stopped at a Shaman House. Stephanie explained how shamans dealt differently with outer diseases like sores, inner diseases and mental illnesses. She also showed and explained dream catchers and medicine wheels. 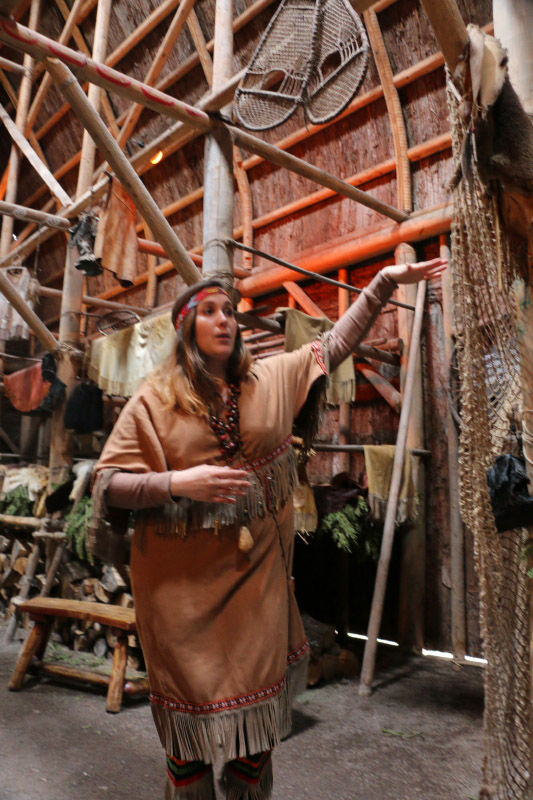 Stephanie explains the longhouse at Wendake.
…….

Walking to the next stop I chatted with Jason Picard-Binet, a manager with Aboriginal Tourism Quebec. He explained that 1,300 Wendakes live on the reserve (374 hectares) with another 1,700 outside. The Grand Chief is Konrad Sioui. There is also a Vice-Grand Chief and seven Chiefs. Previously selected by the women, they are now all voted into office. In addition, there is a traditional Elders Circle, which acts like a Senate. 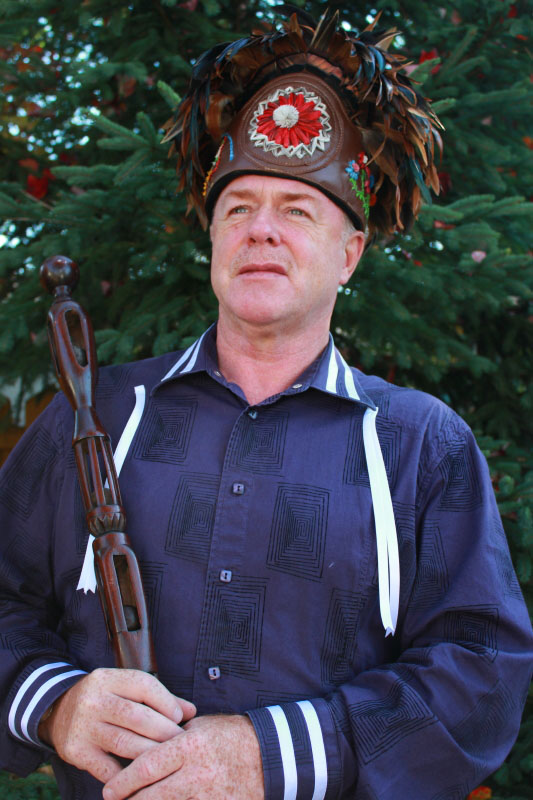 We entered the Huron-Wendat Museum, which was inaugurated in 2008 to preserve the heritage of the Wendat people and to teach and popularize its history, culture and art. The striking building, which looks like the bottom half of a tipi, displays archaeological treasures including the 1760 Treaty, the oldest in Canada. We passed through a depiction of the creation myth and arrived at a “forest” where we learned of the origins of the Wendat people and their long journey through the ages. We saw wampum belts and learned of the importance of showshoes. 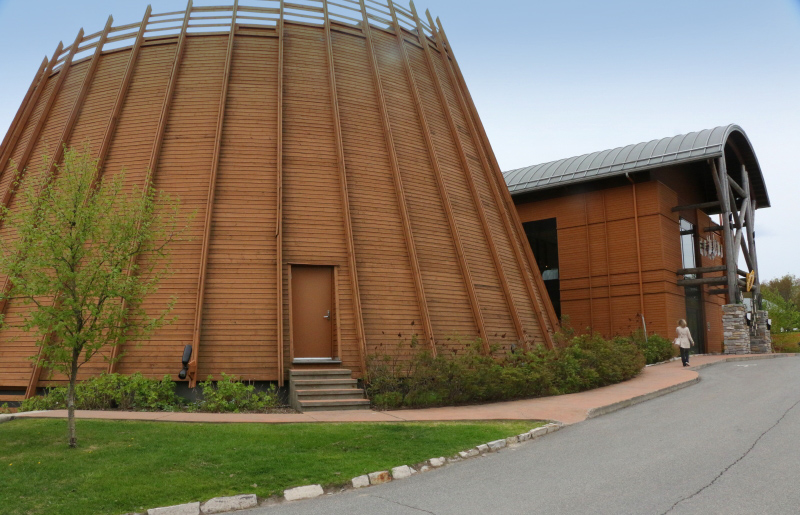 The Huron-Wendat Museum has a mandate to teach and popularize the history, culture and art of the Wendat people and other First Nations.
…….

The Museum is located next to and shares a lobby with the Hotel Premières Nations, which is stunningly decorated with Native art and wolf, fox and bear skins. Each of the 55 rooms in this four-star boutique hotel has a great view of the Akiawenrahk River. Opened in 2008, the décor made me feel like I was in a modern, luxurious version of a traditional longhouse.

We entered a wooden palisade with ramparts and slit windows for defense and then were ushered into another longhouse. As we sipped tea, Dominic sings, drums and tells the story of the Pleiades formation. His deep voice and drumming echo in the narrow wooden-beamed confines. 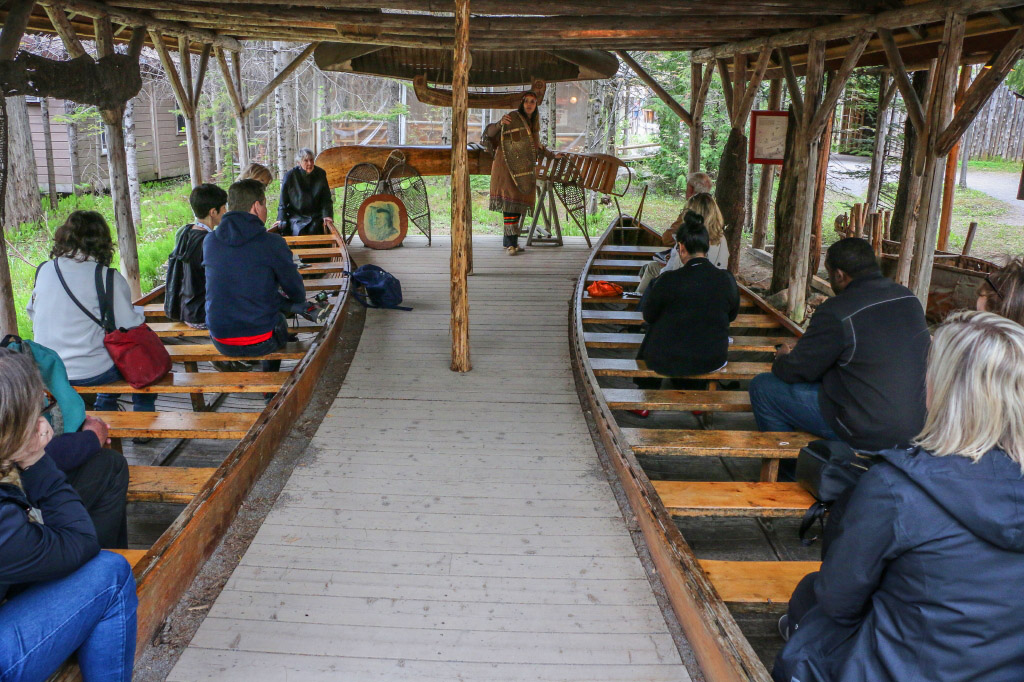 Blinking in the bright light as we exit the longhouse, I am astonished by the breadth of tourism facilities. “The Wendake First Nation is the gateway to aboriginal tourism in Quebec,” says Picard-Binet. I can only nod in agreement.

The Wendake were always merchants and traders, which helped the transition to post-colonialism, Picard-Binet explains. “We have 4.5% unemployment,” he says proudly, “which is better than the national average.” He describes how Wendake is one of the most active Quebec First Nations in economic development. Services consisting of technical assistance, business plan development support, search for financing, and consulting are offered to help entrepreneurs succeed. 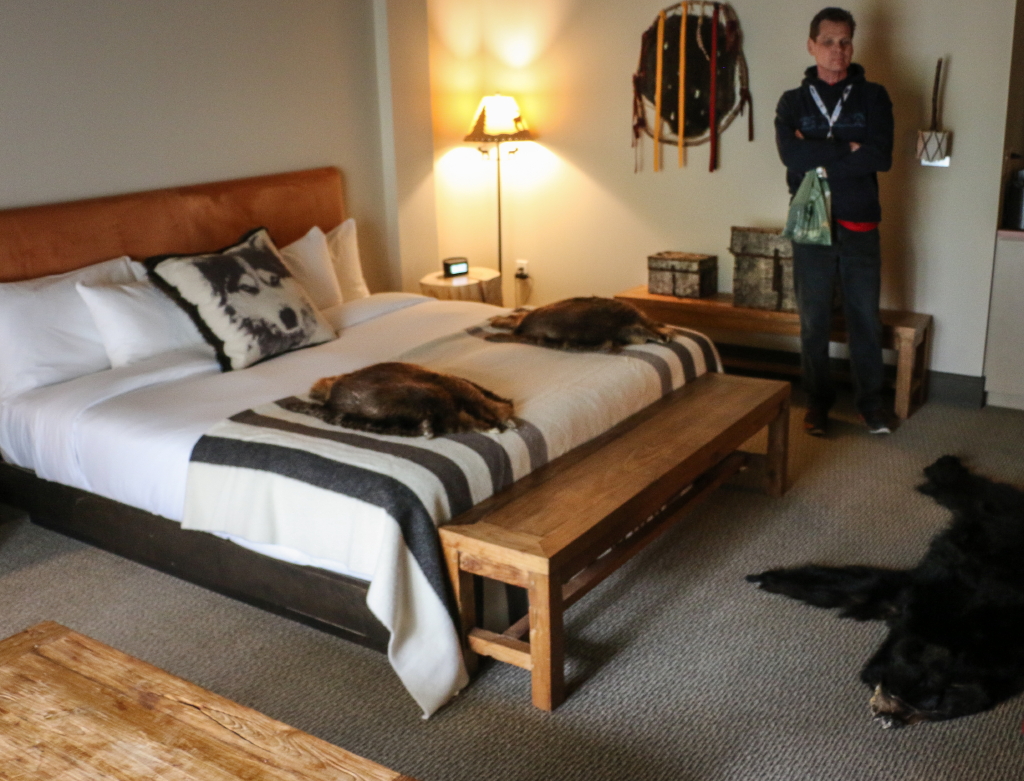 A typical hotel room at Wendake, one of the most active Quebec First Nations in economic development.
…….

GV Snowshoes, for example, is the foremost manufacturer in North America, producing every type of snowshoe available on the market from traditional wooden ones to cutting-edge aluminum snowshoes. It has supplied the Russian, Norwegian, Finnish and Swedish armies.

We stroll to the Notre-Dame-de-Lorette Church, whose construction began in 1730, and is now a National Historic Site. I sit quietly, pleasantly surprised by the presence of snowshoes in the Catholic décor.

Walking on, I am sorry to have missed the colourful Wendake International Pow Wow, held over the Canada Day long weekend.

Our final stop is the Sagamité Restaurant, one of the top five restaurants in Quebec City, which offers delicious indigenous cuisine. The Wendake even brew their own beer, Kwe, which means Welcome. I raise a glass, and toast the richness of Wendake traditions and culture.

Find out about Sainte-Marie among the Hurons, a re-creation of the French Jesuit settlement that existed near modern Midland, Ontario, from 1639 to 1649. 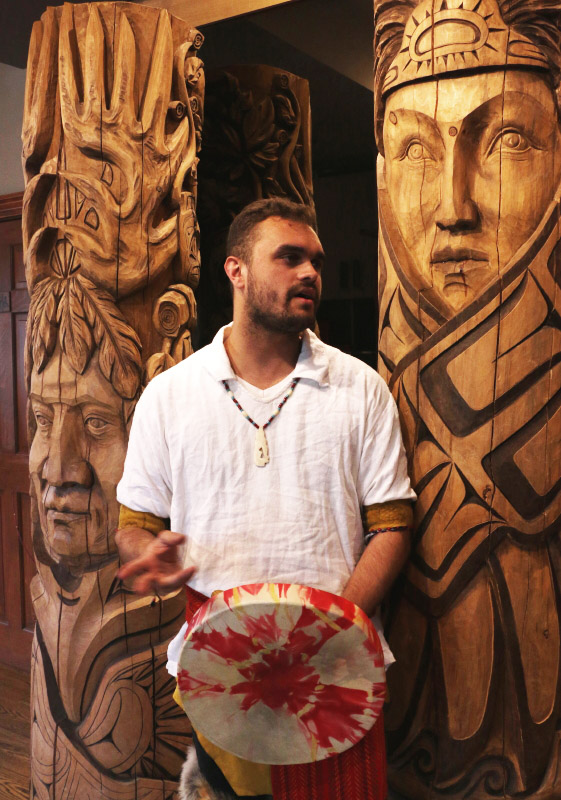 Dominic at the Sagamité Restaurant
…….

Previous
Motel Not Fancy
Next
Empress of Ireland Museum