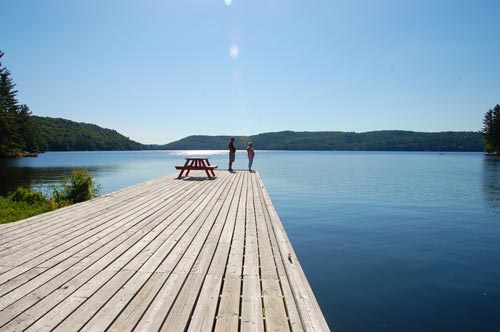 Canadian Thanksgiving is this weekend and at Foxwood, it’s possible to cook your own turkey. The resort has cottages with fully equipped kitchens. This is the perfect time to travel Canada especially if you love a good road trip. Resort rates are lower than the busy summer season, especially in mid week, and the traffic is light.

Lake of Bays is crystal clear. Its headwaters are the rivers and lakes of Algonquin Park. We toured a good portion of the lake by boat. It is beautiful and I hope it remains that way. Some summer residents seem bent on building HUGE “cottages” but at least the bulk of what we saw were tasteful in design. Many have also built elaborate boathouses. We saw several of these on our tour. We also passed the Bigwin Island Golf Club and its signature 18th golf hole. I was amazed at how much of the old Bigwin Inn is still standing, but Rob, our guide, says it has been condemned and will likely be torn down. Too bad. During the big band era, it was THE place to be. The old Bigwin water tower will likely stay and that’s a good thing. The tower is a reference point on this lake of many bays which we discovered is easy to get turned around on. The Dorset Fire Tower is another landmark you can see from the water. It’s popular with road trippers, especially in fall.  You can actually climb the tower and if you can handle heights, it’s worth the small price of admission. The view is out of this world. 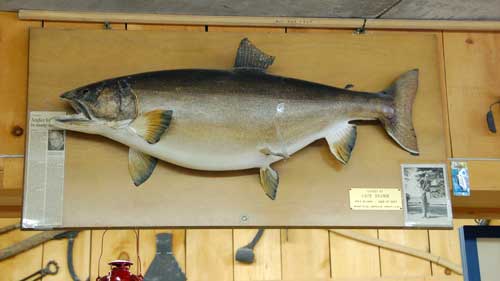 One of many trophies at Robinson’s General Store in Dorset – 41 inches, 35 pounds, caught by Jack Bramm on Lake of Bays in 1966

We also stopped in the little village of Dorset and had an ice cream cone and checked out Robinson’s General Store. It has been operating since 1921 and sells everything under the sun. 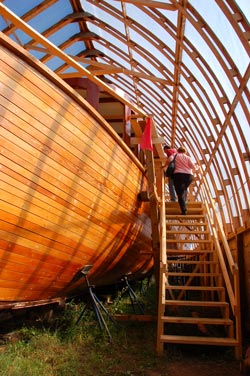 The Bigwin steamboat being renovated

Dorset is photogenic, so if you like snapping pix, this is one town not to miss. While we were there we caught up with Bruce Davidson, a boat builder/local carpenter at the Lake of Bays Marine Museum. He’s helping restore The Bigwin, a 1920s steamer yacht that once ferried passengers across the lake from Dorset to Bigwin Island. The Bigwin sat on the bottom of  the lake until a short time ago. You can see its restoration in progress at the museum and if you feel so inclined make a cash donation to help the local heritage boat society complete its project.

Check out the map of Muskoka, and visit the friendly folks at Foxwood Resort on Lake of Bays.

Previous
Kensington Market in Toronto
Next
Halloween in Canada