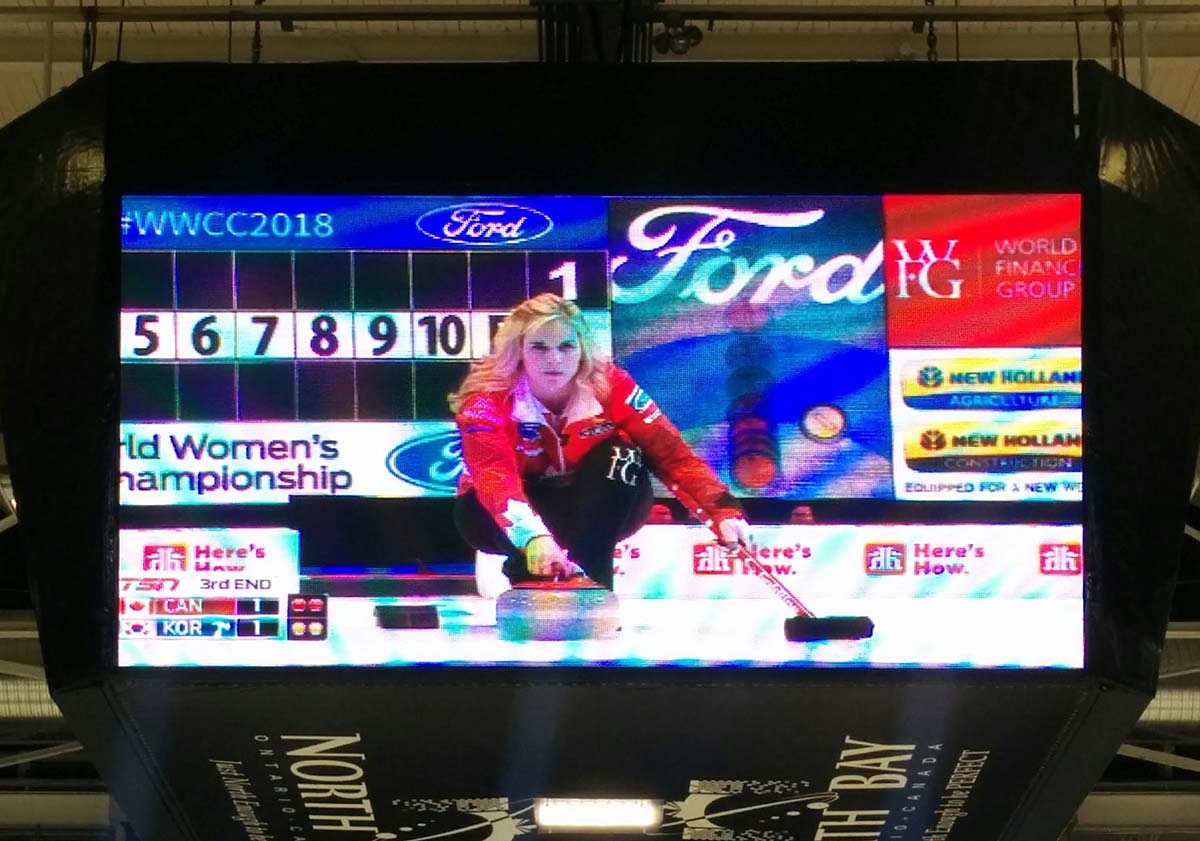 Curling is a genteel undertaking which Canadians have been indulging in since long before we had a country. In many small towns across Canada the curling rink is the most prominent building in town. Brian Robert reports back from the World Women’s Curling Championship in North Bay …
…….

North Bay, Ontario, known as the ‘Gateway to the North’, had to open the doors a little wider for nine days in March as they became the Gateway to the World – the world of women’s curling that is. For the first time this northern Ontario city hosted the Ford World Women’s Curling Championship, an international event that saw the players and fans of thirteen countries descend upon this comparatively small venue for over a week of competition.

There was some concern that this relatively small city could not pull off this marquee curling championship – but by the end of the bonspiel North Bay got rave reviews for their logistical skills and small-town charm. Over seventy thousand fans attended the round robin and championship parts of the competition – setting a new attendance record. Over four hundred volunteers helped out at the recently renovated arena known as the “Memorial Gardens” as well as the “Patch” – the transformed Granite Curling Club that was the site of the ever popular social and entertainment program. 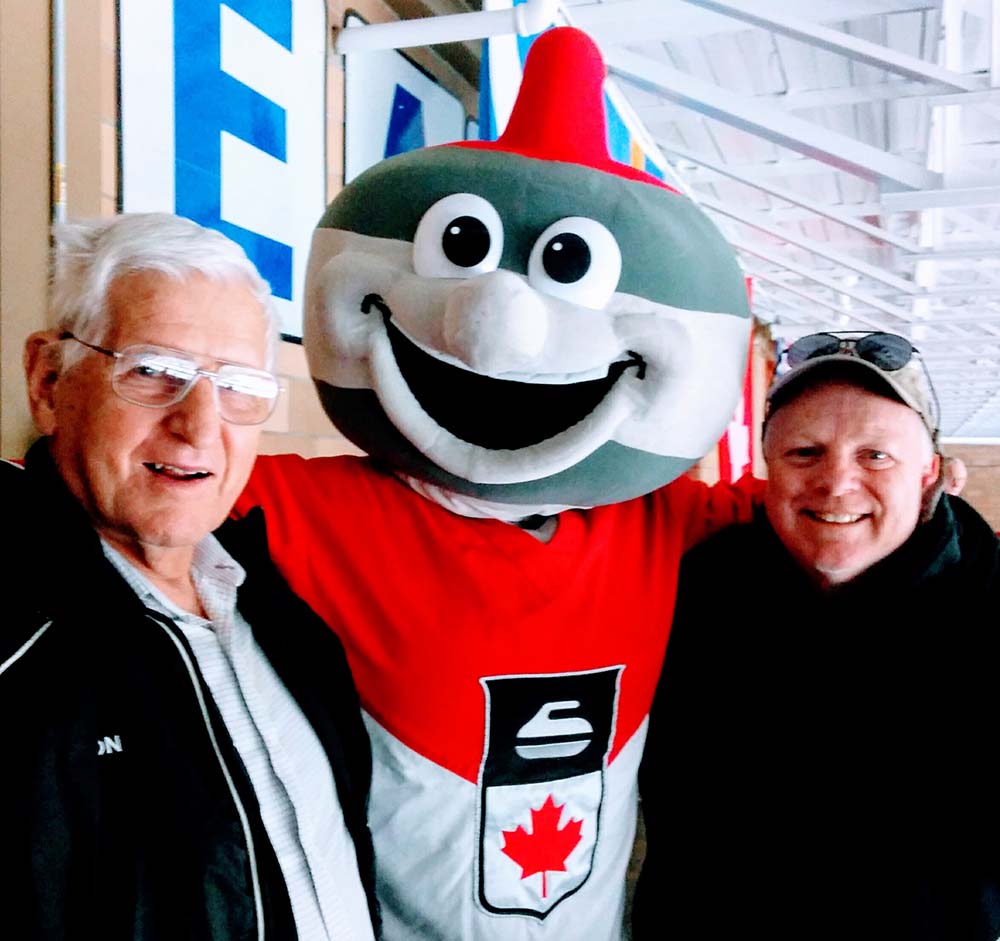 It could be said that a curling bonspiel is kind of like the surface they play on – it is a nine-day marathon that sees each team play all other teams in a drama that unfolds at a glacial pace. There is some truth to this …

Round robin games see over twenty-three thousand rocks thrown over twenty draws to determine which teams qualify for the top six championship round.

For the true fan, though, this is part of the appeal as the tournament starts to take on a life of its own in the run up to the finals. Games are often won or lost on the last rock as errors are rare in this calibre of curling. 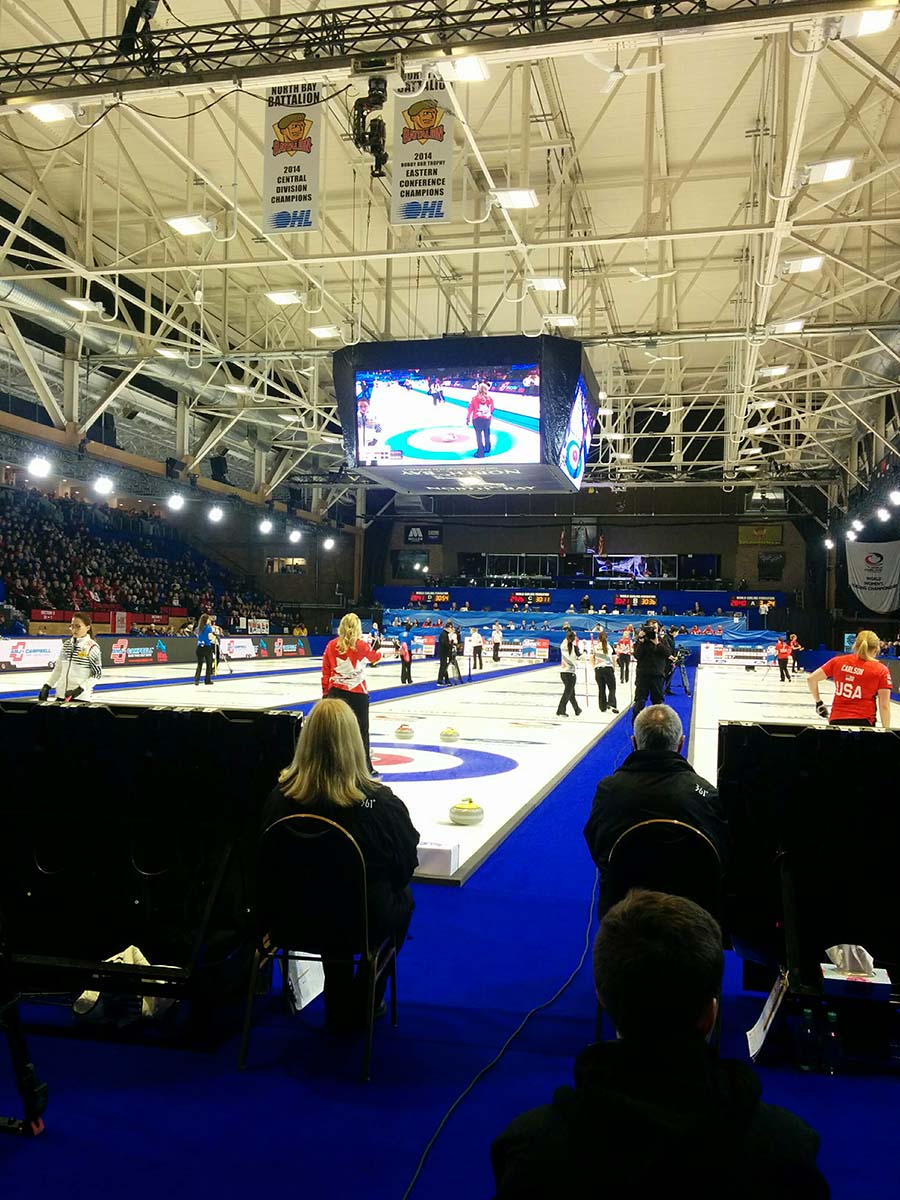 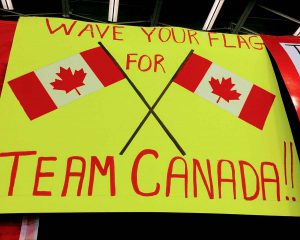 Fans were transfixed by the strategy in play and the superb shot making on display with many wondering if they could pull it off back home at their own curling clubs. From what I witnessed, and I include myself in this observation, most of the fans are likely beyond their glory days as curlers as most were of an age where they were challenged by the steep stairs in the arena and the long walk to the washrooms. The median age of the crowd and their collective experience as curlers did make them ideal spectators, though, as they were savvy enough to genuinely appreciate the quality of play in front of them and were quick to show that appreciation regardless of which team made great shots. Curling is a genteel undertaking. 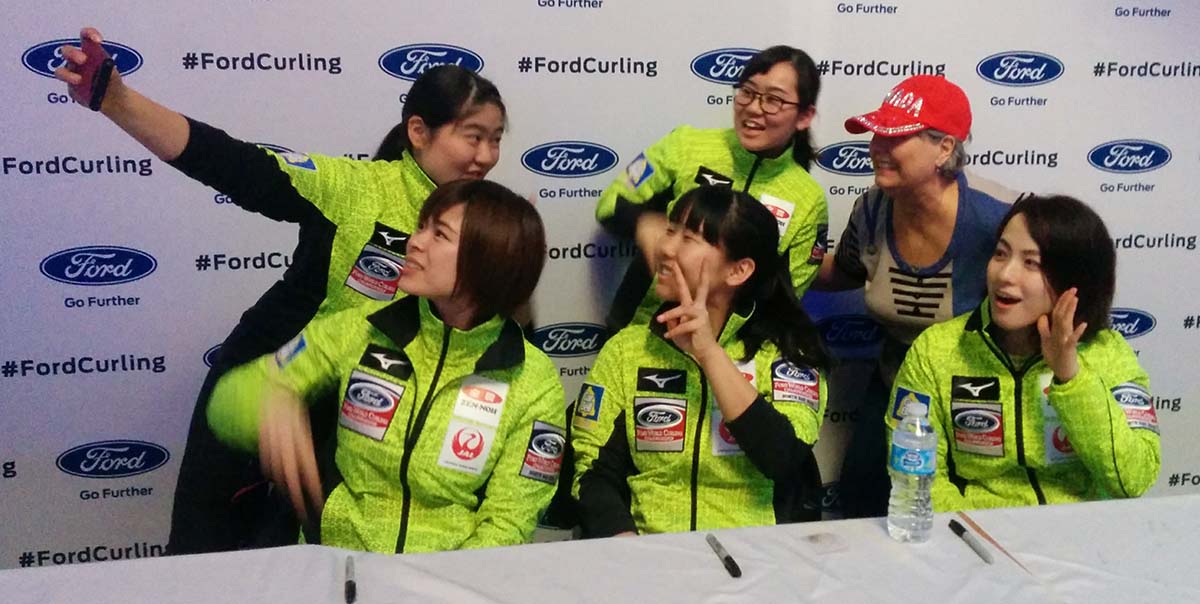 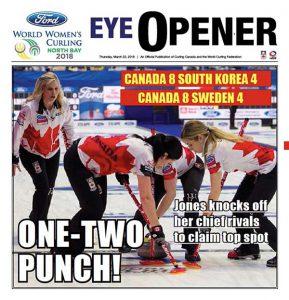 The Eye Opener is the official daily paper of the Ford World Women’s Curling Championship.
. . . . . . .

Friendships were made or rekindled during the event – both at the arena and back at the ‘Patch’. A short lived community emerges around an event of this nature – the day starts with the distribution of the “Eye Opener” a free newspaper covering the event, food and drink is shared among many over long days, fans take advantage of the free shuttle between the games and the fun at the Patch, chances are made to get signatures from and ask questions of all the players from all the teams, and there is a sense of pride extended to the organizers and hosts in North Bay who made the event seem effortless. 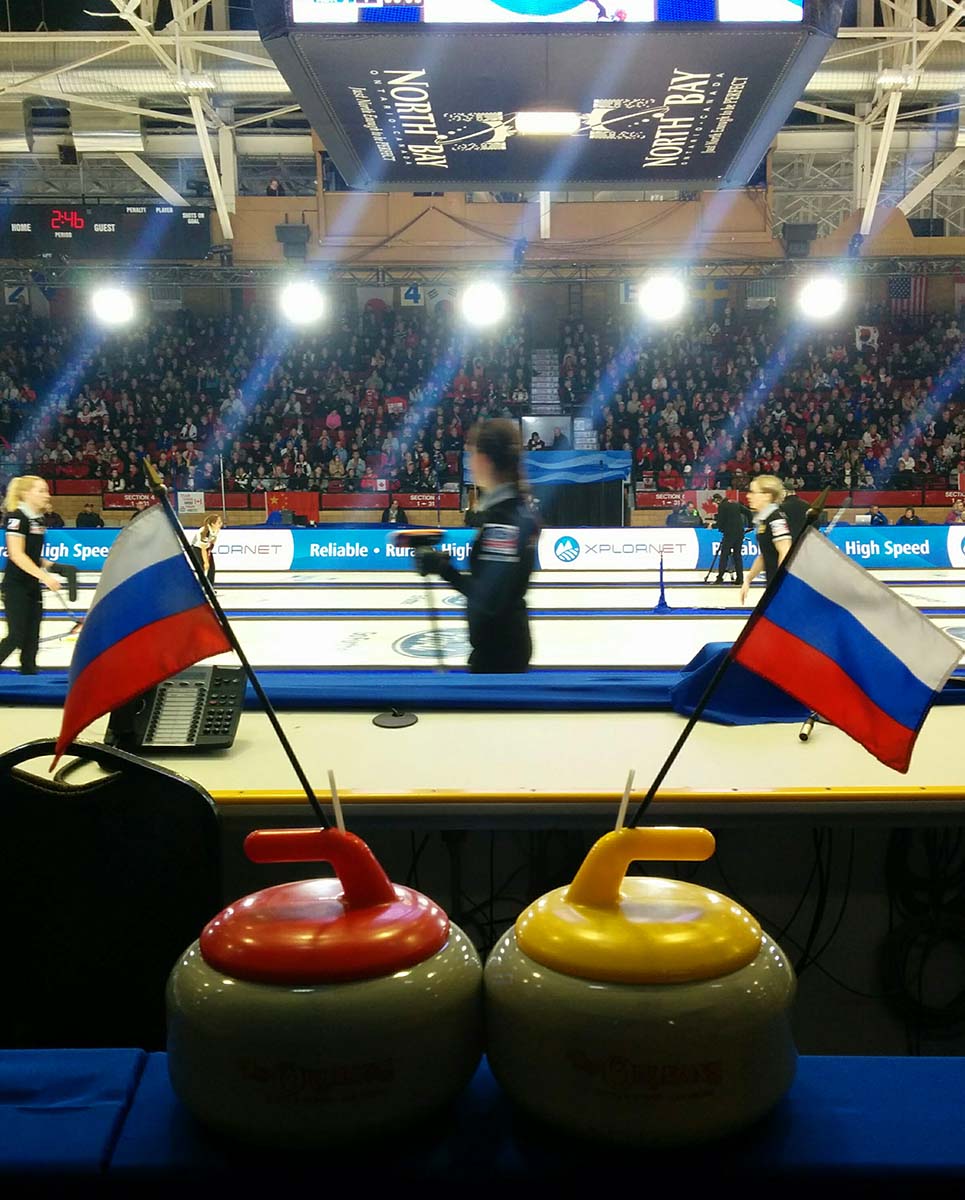 As for Team Canada they showed up with the usual target on their back at international events of this scale. Jennifer Jones and her team of Dawn McEwan, Jill Officer, Kaitlyn Lawes and alternate Shannon Birchard were under even more pressure as the home team, playing less than a month after our somewhat disappointing performance at the traditional curling competition at the PyeongChang Winter Olympics. The rest is history, however, as Team Canada stepped up and swept round robin and championship play with fourteen straight victories to get their second gold medal and become world champions again. Over the years Jones’ team has won bronze, silver and two golds at this competition and a gold at the 2014 Winter Olympics. Their “third”, Kaitlyn Lawes, has also won the first ever mixed doubles curling gold just a few weeks earlier in Korea.

All in all, it’s a great time to be a Canadian curler! 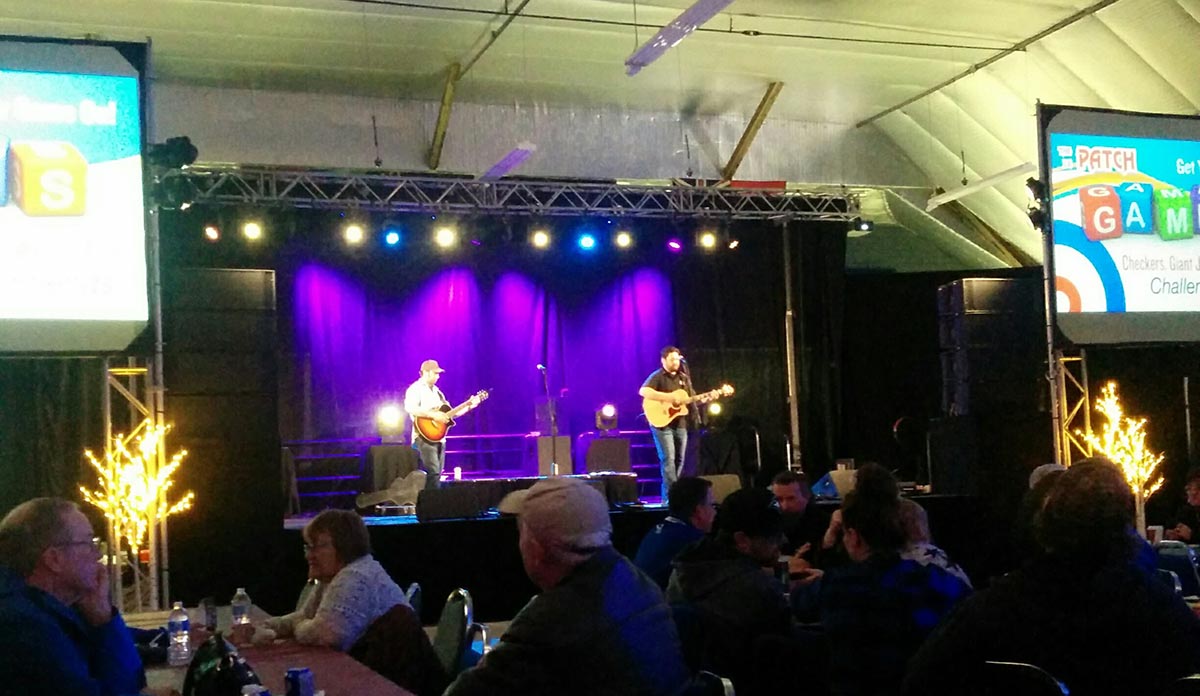 “The Patch” – the transformed Granite Curling Club in North Bay, Ontario, was home to the ever popular social and entertainment program at the 2018 Ford World Women’s Curling Championship.
. . . . . . .