I’ve always been intrigued by the roadside traveller’s motel. Perhaps I’ve seen too many bad movies, or read one-too-many trashy novels, but I always wonder about the secrets that must dwell within these places.

What clandestine affairs and nefarious dealings have passed behind those thin walls and under that blinking neon “Vacancy” sign? What lonely tragedies and end-of-the-road downfalls have played out beside the colour TV and the rattling air conditioner? 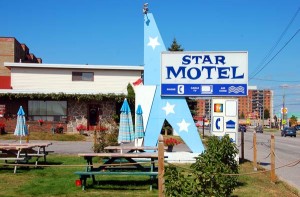 Since the early days of the automobile, over-active imaginations like mine notwithstanding, the roadside motel, motor inn, highway hotel, cabin camp or cottage court has been a staple for travellers seeking a middle ground between expensive hotels and the rough and tumble of camping in a tent. Auto camping is still very popular in places where there is a large, seasonal holiday population, and where business is still conducted face-to-face away from the office. North Bay, the gateway to northern Ontario is such a place.

This is Canadian Shield country, geographically the strategic center of Ontario, where Highway 11 and the TransCanada Highway meet. That makes it a major crossroad in Ontario. It’s the middle ground between the north and south, the south terminus for the Ontario Northland Railway, and a place where people meet and business deals are struck. The city is also a big destination for outdoor enthusiasts, especially fishermen who come to Lake Nipissing, often referred to as the sixth Great Lake. Nipissing covers over 800 square kilometres and is relatively shallow, so the fishing is excellent, especially in winter. Ice fishermen come every year from all over North America to fish for trophy-sized Pickerel (Walleye), Aurora trout and Brook trout.

This area was used in the early fur trading days of Canada. It was enroute from Montreal, up the Ottawa River and into Georgian Bay, which is a part of Lake Huron, via the French River. Lake Nipissing also lies about 25 km (16 mi) northwest of Algonquin Provincial Park, so there are lots of travellers in the area. 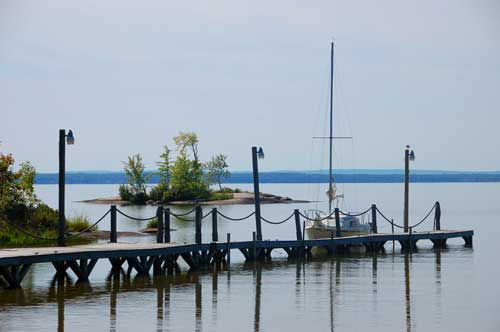 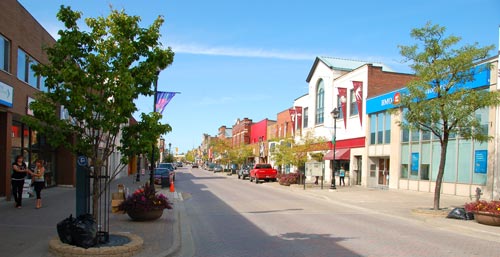