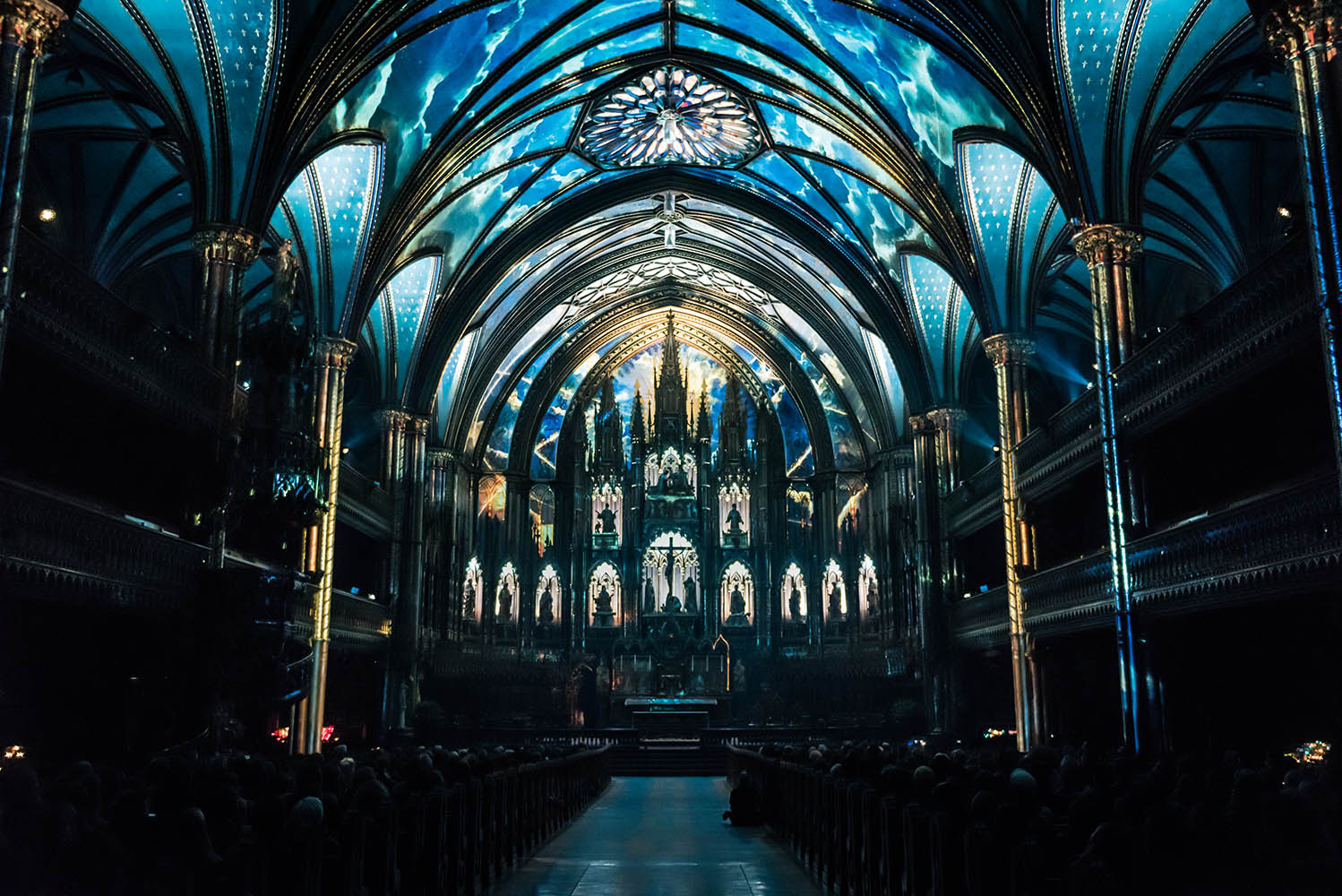 Montreal gets down with lighting up …
…….

It was a horrendous rainstorm accompanied by gale-force winds and flashing lightning while the floodwaters rose ominously up the stain glass windows. But we remained dry, safe and in awe as we sat in comfort in the cavernous nave of Notre-Dame Basilica in Montreal.

This impressive storm took place inside the basilica with lots of lightning and thunder and orchestral music, but no rain drops. The spectacle – called Aura – is staged nightly to salute the 375th anniversary of Montreal’s founding. 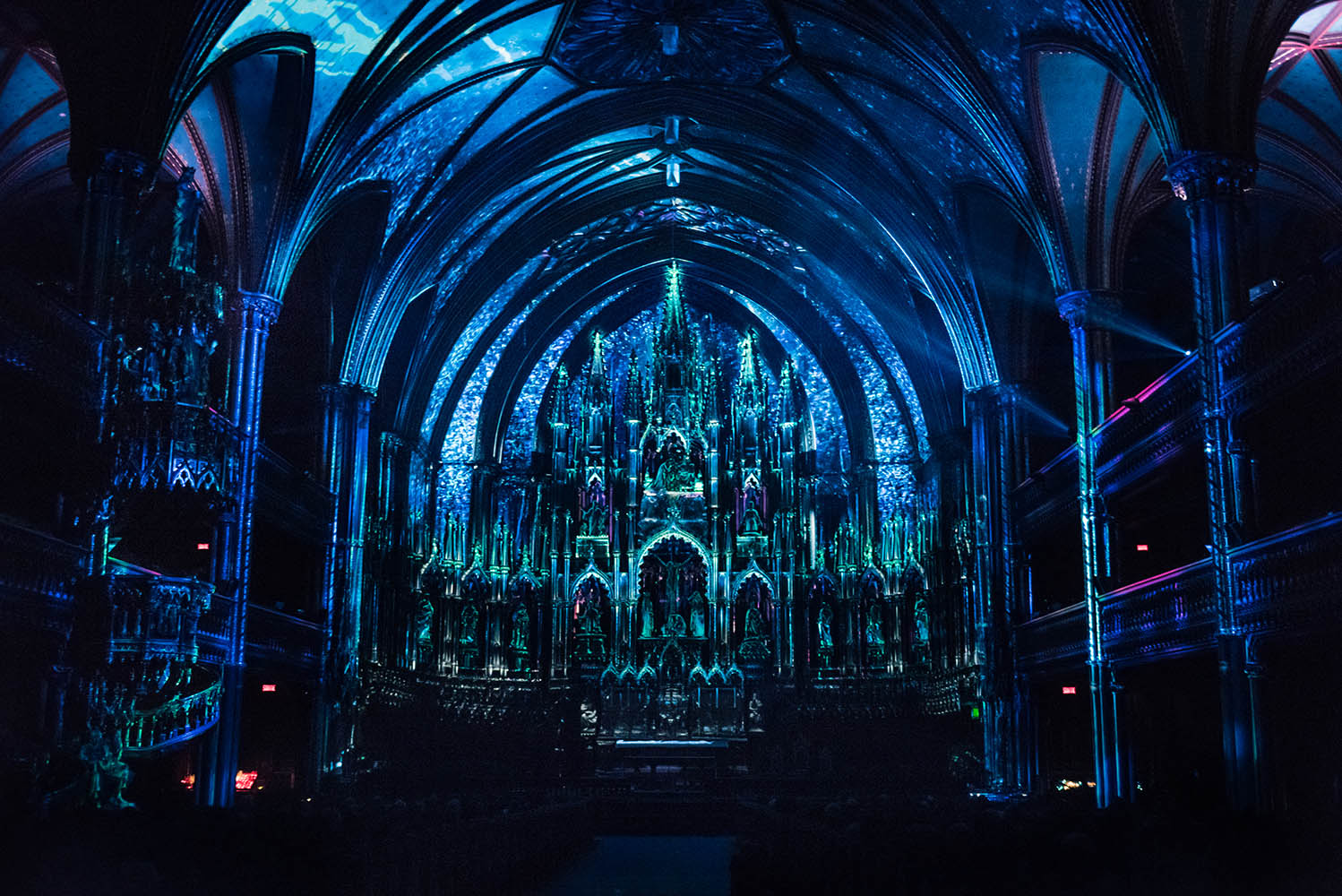 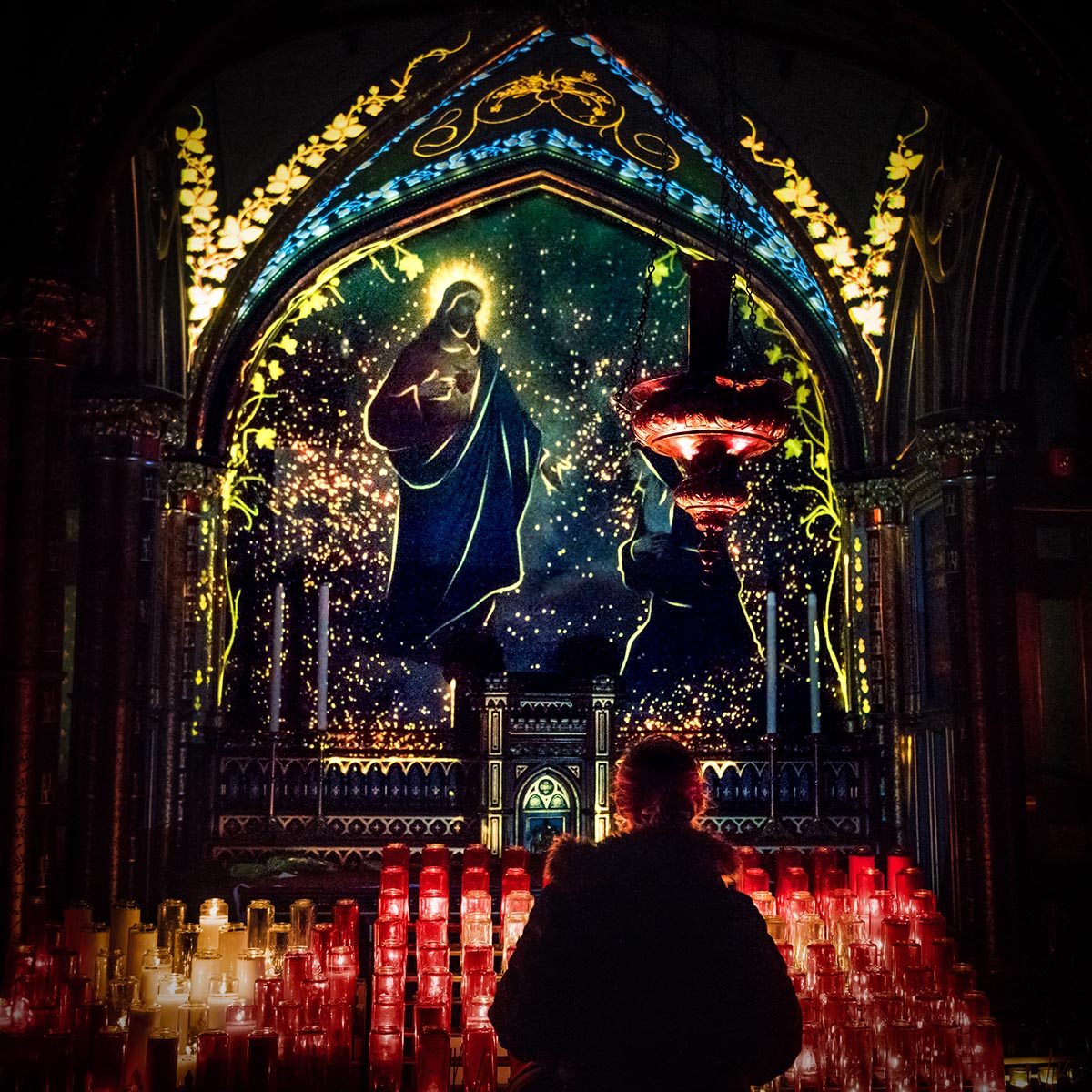 The church, with its rich, warm interior colour schemes, has always been a major free tourist attraction in Montreal, but now attracts 600 spectators most nights paying $23 a head to witness the spectacular marriage of laser lights, its interior design and the Montreal Symphony Orchestra.

The show was created by Moment Factory, a Montreal-based multimedia studio that does most of its work outside of Canada. Among its more recent projects are Madonna’s concert tours, illuminating Atlantic City’s boardwalk and throwing a sound and light show up on the façade of Barcelona’s Sagrada Familia Basilica, which has been under construction for more than 100 years.

The show opened in March, 2017 and will run for at least one year. 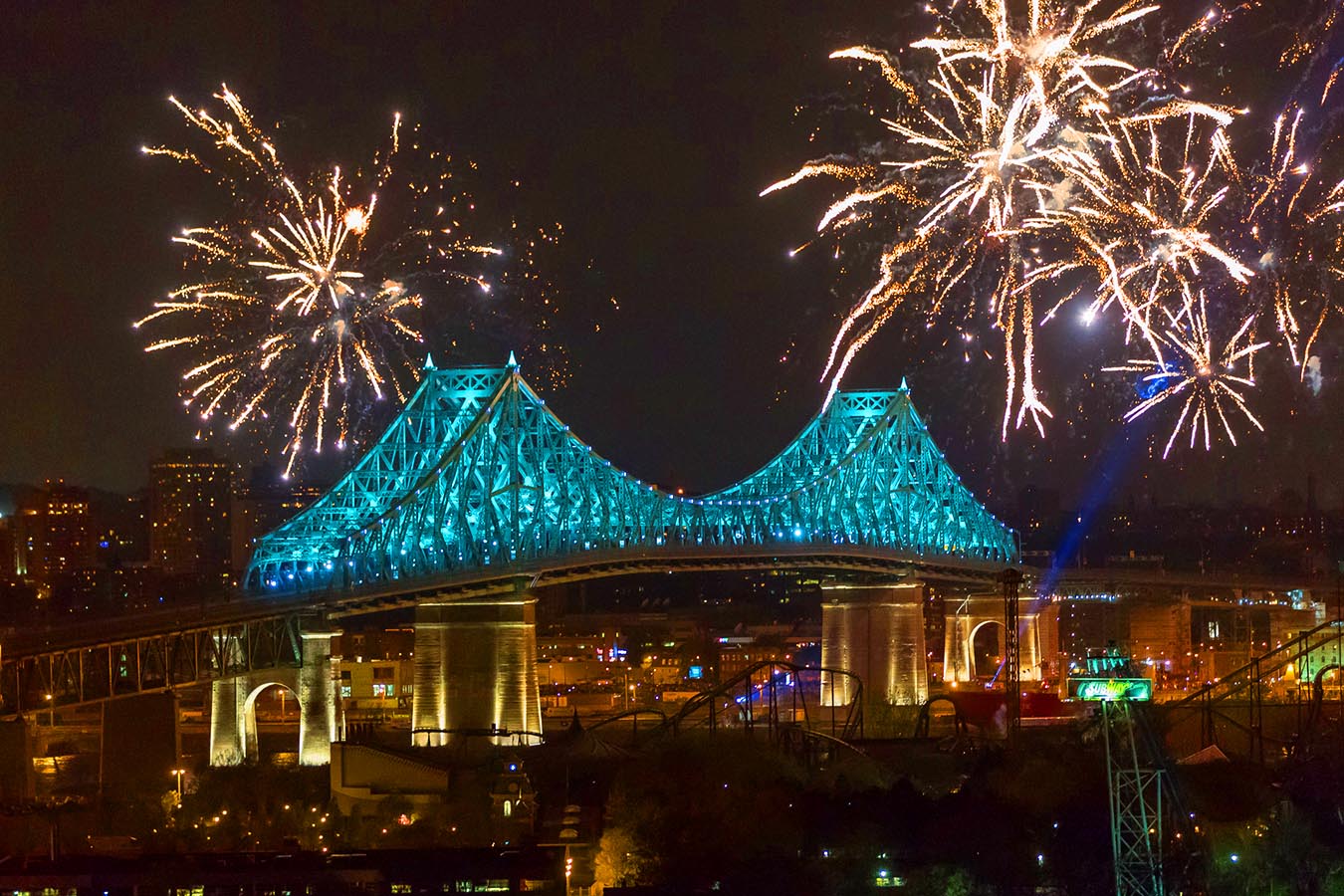 The Jacques Cartier Bridge looks impressive by day as it stretches across The St. Lawrence River connecting Montreal Island to Longueil on the south shore. But at night it becomes the throbbing, colourful heartbeat of the city. Thousands of lights on the 2,687-metre-long bridge reflect the mood of the city. A win by Les Canadiens will turn the bridge a bright red. A loss will make the bridge blue. The 86-year-old bridge changes colour at midnight to start each new day. The weather, the season, principal news events, etc. will change the colour the bridge is wearing.

Again the Moment Factory is providing and synchronizing the bridge’s lighting and the 2,800 flickering lights shine inward towards the bridge and thus not overwhelm the stars at night.

More than 400,000 turned out for the first lighting of the bridge on May 17 (2017) with 1.8 million watching on TV, but the night was disrupted by Montreal police conducting a work-to-rule protest. So the lighting ceremony was repeated on Sunday June 25.

Montreal’s 375 years of development can best be told from two locations:
one high; one low …

You can’t get much lower in Montreal than in its original sewer line. The ancient drain was discovered in 2002 and it indicated the location of Fort Ville-Marie – the original settlement of 1643 that grew up to become Montreal.

Today you can walk in this cleaned-up sewer and see its original construction and then go up into the five-storey building recently opened above the old sewer and see the 300,000 artefacts and ecofacts researchers have recovered from the site of Fort Ville-Marie in old Montreal. They tell the story of old, old Montreal.

To learn about today’s Montreal you should go to the city’s highest point – the top floor of Place Ville Marie. From the 47th floor observation lounge you can see the entire city and the walls are lined with details about what you’re looking at, plus photos of the city’s modern history. Place Ville Marie is the headquarters for the Royal Bank of Canada and the centre point for Montreal’s extensive underground city – the world’s busiest. It has more than 1,600 retail shops and restaurants.

Previous
The Horror of St. Michaels Residential School
Next
What makes an Olympian?