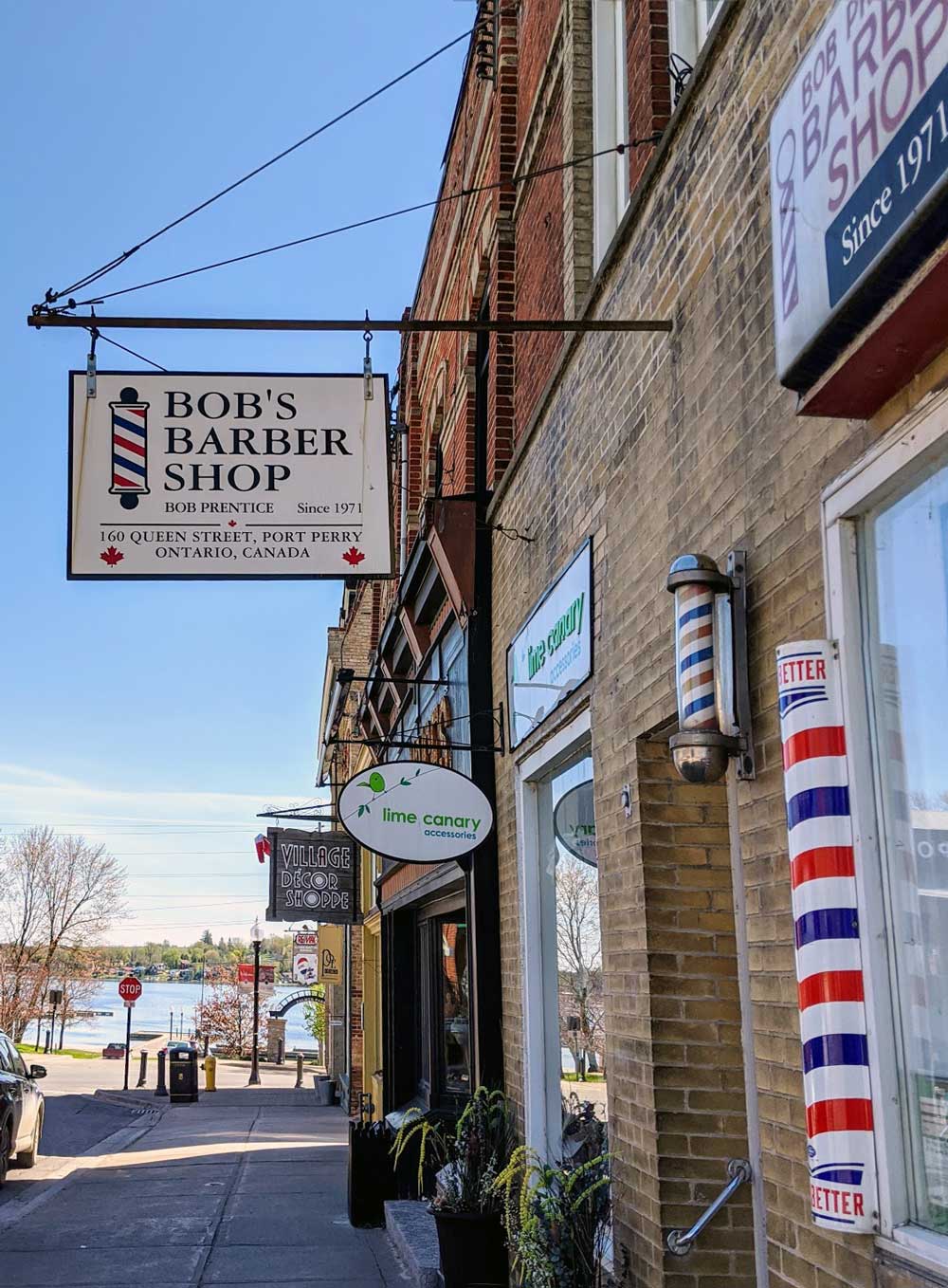 This is a touristy place trying to figure things out in these crazy times.
…….

Many Canadians are turning to their own streets to satisfy their wanderlust. In this ROADstory, Brian Robert takes us on a tour of Port Perry, Ontario. Normally a popular daytripping destination, Port Perry is trying to find its groove in a global pandemic. 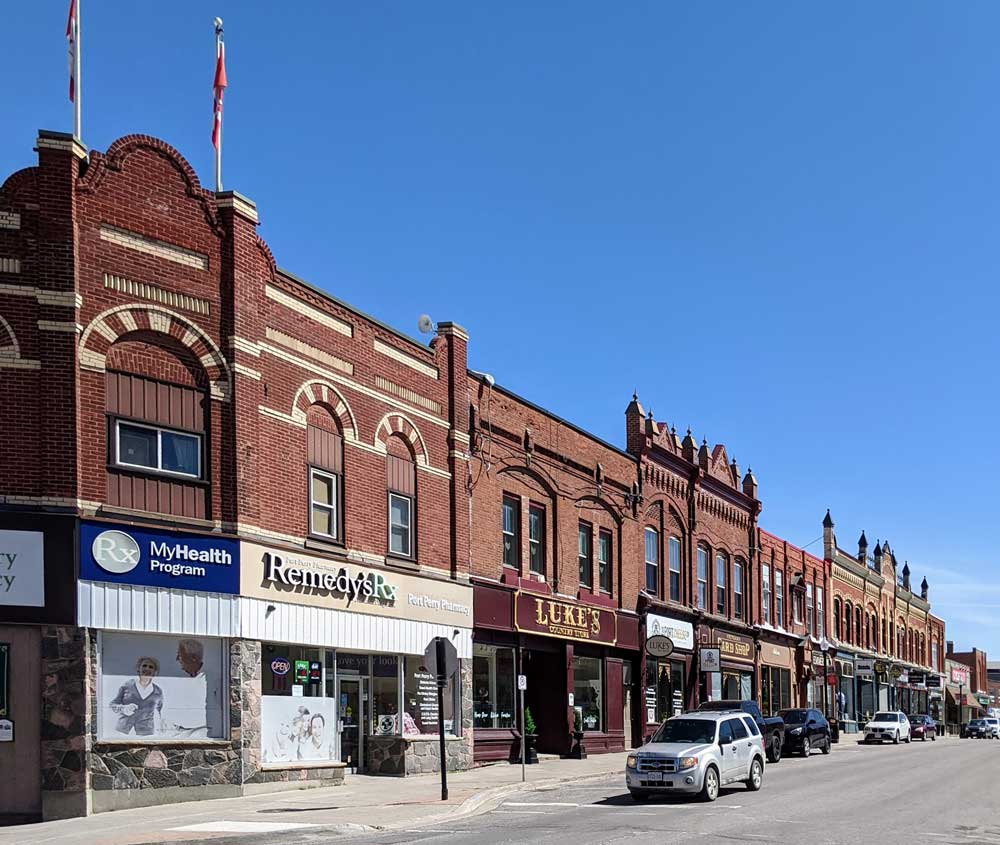 Downtown Port Perry, Ontario – With travel restrictions still in place, will Canadians turn to their own streets to satisfy their wanderlust? – All photos by Brian Robert
. . . . . . .

Port Perry is a small town located just over an hour north and east of Toronto, nestled on the shores of Lake Scugog. Like many towns in Ontario, this community is situated on the ancestral land of the First Nations – in this case the Mississauga’s of Scugog, part of a larger nation now relegated to a landlocked chunk of turf in the middle of Scugog Island. A curse for generations, this tiny parcel of land impoverished this shrinking group of people until some visionary leader pushed for, and was successful at getting the first casino in the Greater Toronto Area located on their reserve. 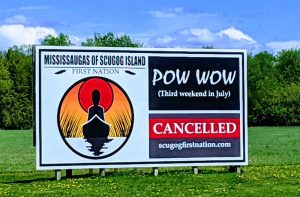 The Great Blue Heron casino was an instant success, attracting day trippers from across the Durham Region and Toronto, attracting millions in travel dollars to the First Nations community, bringing an end to generations of poverty and enriching the larger community as well. A beautiful community centre, a successful annual pow-wow and a smoke shop, gas station and even a Tim Horton’s arrived in a spot previously distinguished by patchy fields and scrub forests. Like elsewhere in Canada, the casino is closed and the pow-wow has had to be cancelled during the pandemic, grinding this busy place to a halt for the time being; with the exception of those looking for discount smokes, cheap gas and a drive-through coffee. 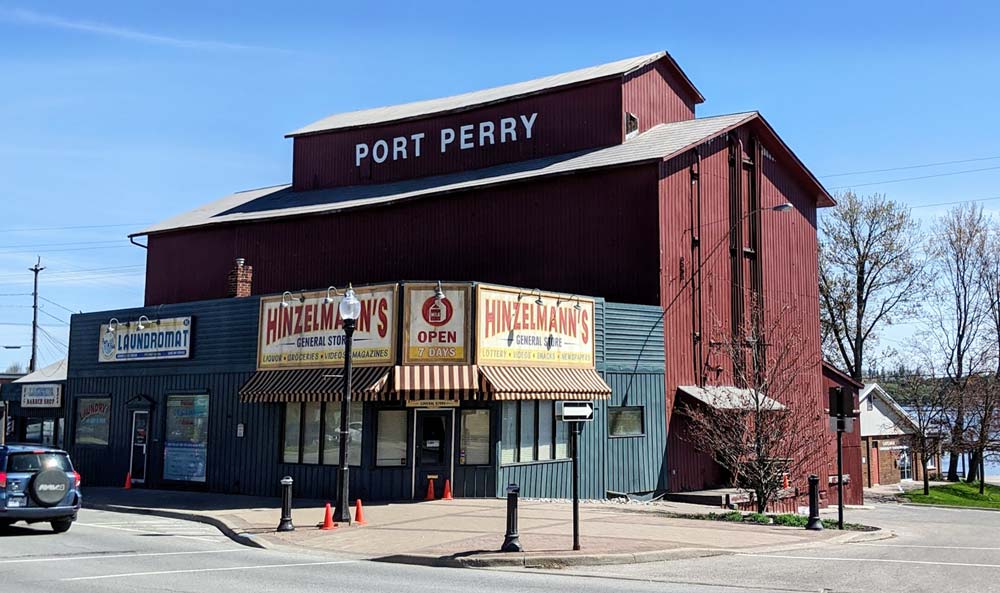 Canada’s oldest grain elevator backstops Hinzelmann’s General Store, as Port Perry stands in for the fictional town of “Lakeside” in the shooting of the ‘American Gods’ series for the STARZ network.
. . . . . . .

Port Perry proper emerged from the shores of Lake Scugog with the arrival of the railway in the mid-1800’s. Prior to the construction of the Trent Canal and dams in nearby Lindsay, Lake Scugog was nothing more than a large wetland and a popular hunting and gathering spot for the first nations. The dams backed the water up and created the shallow lake boaters and anglers now enjoy, and provided a spot to transfer lumber and grain floated down the lake and harvested from the nearby land on to the trains. The local hamlets of Prince Albert, Borelia and Manchester, once bustling pioneer grain handling and farm service centres, largely emptied out as merchants and residents gravitated to the train hub in Port Perry. 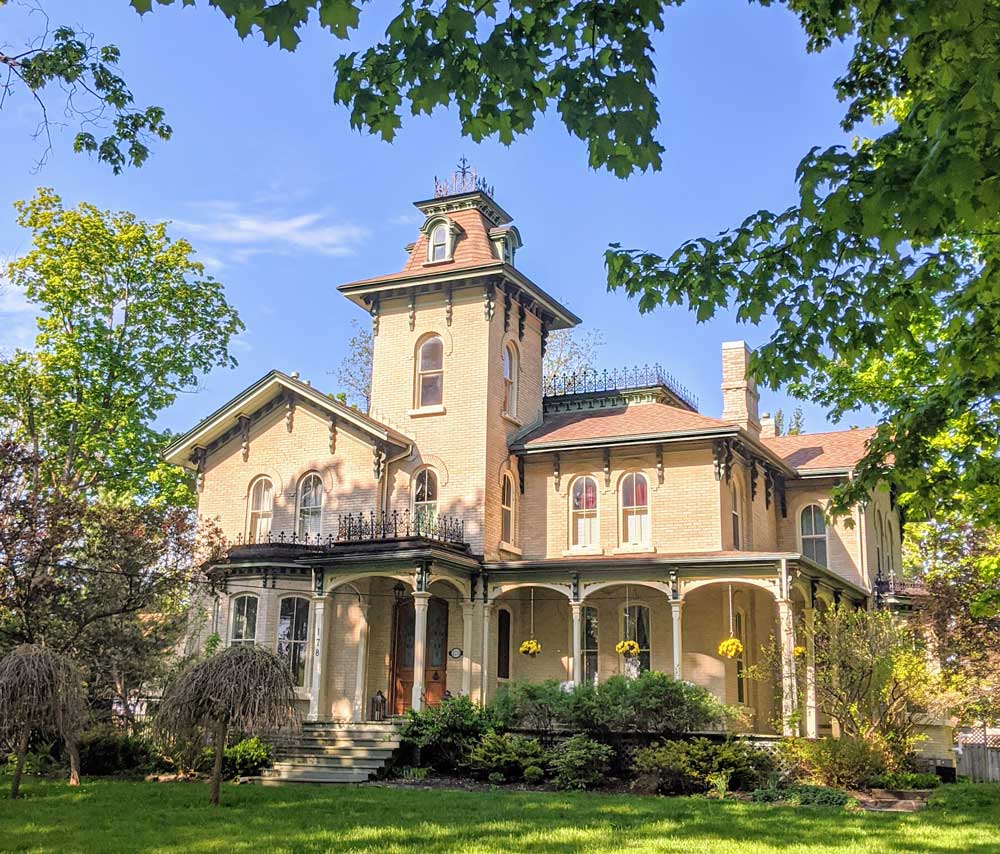 Port Perry thrived – the large grain elevator looming over the shoreline is the oldest remaining one in Canada that became an anchor for an expanding main street. Like many towns, this main street burned to the ground a couple of times until the original wooden structures were replaced by stately brick Victorian storefronts – most of which exist to this day and contribute to the charm and appeal of this day-tripping mecca. Grand, even palatial homes were built by the wealthier merchants in town. The aesthetics of this town is not lost on the film industry that has used it as a backdrop for a number of movies – IMDb lists thirty-one films shot in whole or in part in this town – most notably the comedy Welcome to Mooseport, as well as an impressive (embarrassing?) number of Hallmark Christmas shows. 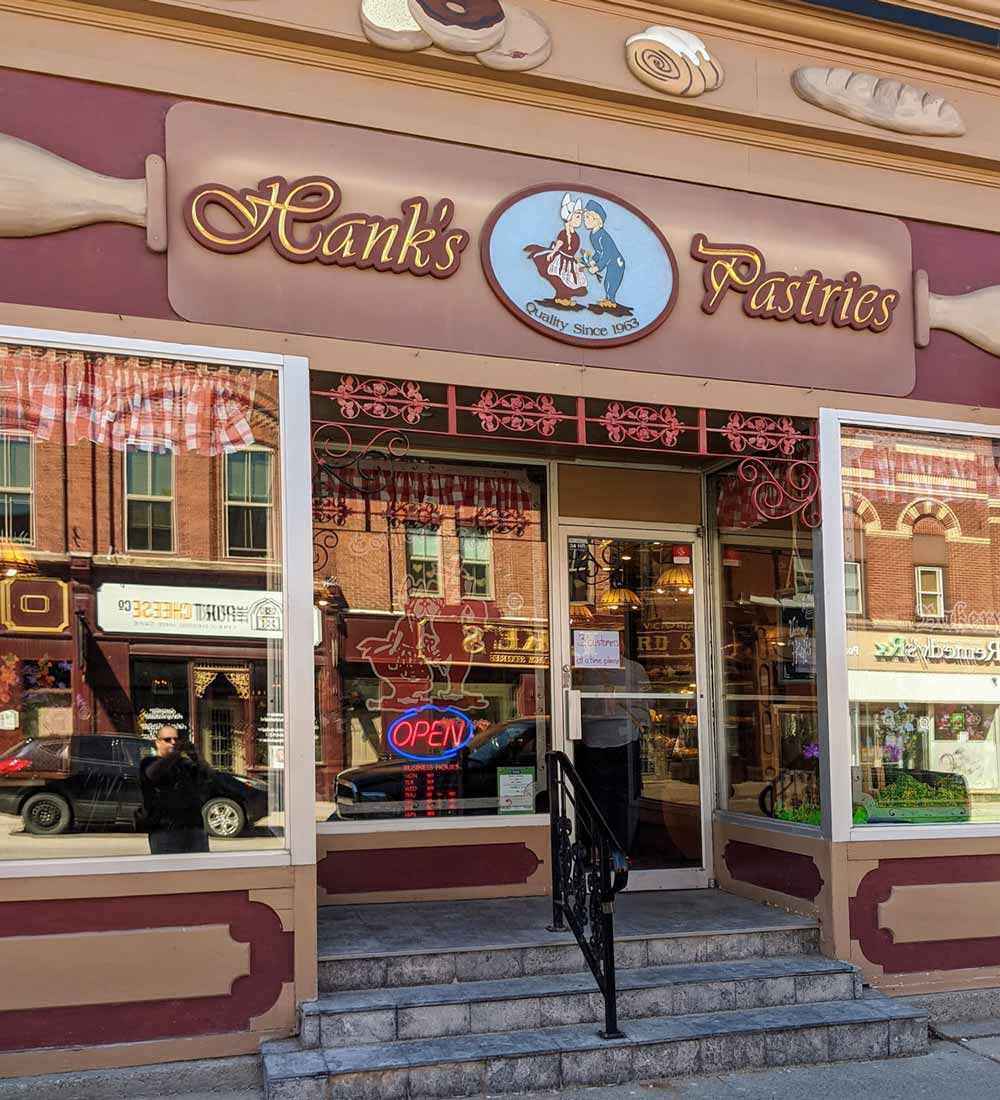 This commercial street is now littered with dozens of shops that appeal to visitors and locals alike. Dana’s Goldsmithing Inc., the Wee Tartan Shop, Tribal Voices and Brock’s Department Store are just a few of the unique retailers that have carved out a name for themselves and attract shoppers from across the region. Hank’s Pastries is famous for their cinnamon buns that generate line-ups of locals and visitors alike, as does the sweet enticements at the Nutty Chocolatier confectionary. Until the recent removal of some lockdown conditions, these retailers remained closed, and are slowly re-opening with restrictions in place. 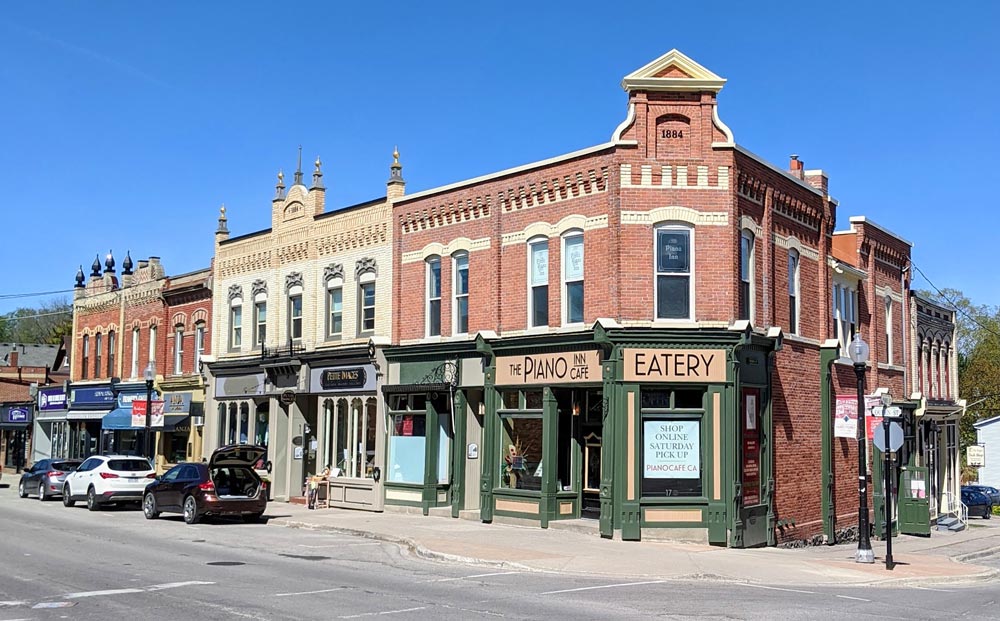 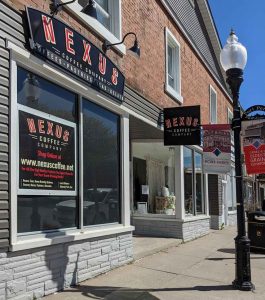 High-octane coffees and mouth-watering pastries can be had at a number of places like the newly arrived Nexus Coffee Company, the Queen Street Beanery Café or the Pantry Shelf Café and Bakery, all closed or struggling to make an online name for themselves. There is an abundance of excellent restaurants in town supported, in part, by day trippers looking for a meal. Most have shifted to a take-out model to keep the lights on, but there is a noticeable lack of people on the sidewalk terraces and patios that overlook the lake. 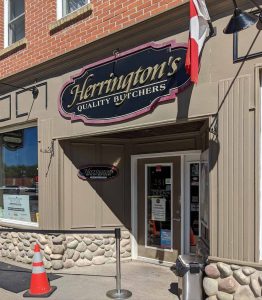 Looking to take something really tasty to enjoy at home? Grab some meat, or one of the renowned meat pies at the award-winning Herrington’s Quality Butchers. Brent Herrington, who helms this family run business was selected as Ontario’s Finest Butcher in the 2019 edition of that competition. This shop pivoted quickly at the onset of the pandemic – offering curbside pick-up early in the game and keeping families going with local meat products. One specialty shop that had its grand opening sidelined by the pandemic was the Port Cheese Company, to their credit they were quick to improvise and have used local social media to promote their popular Build Your Own Board and Gourmet Picnic bags to take home. 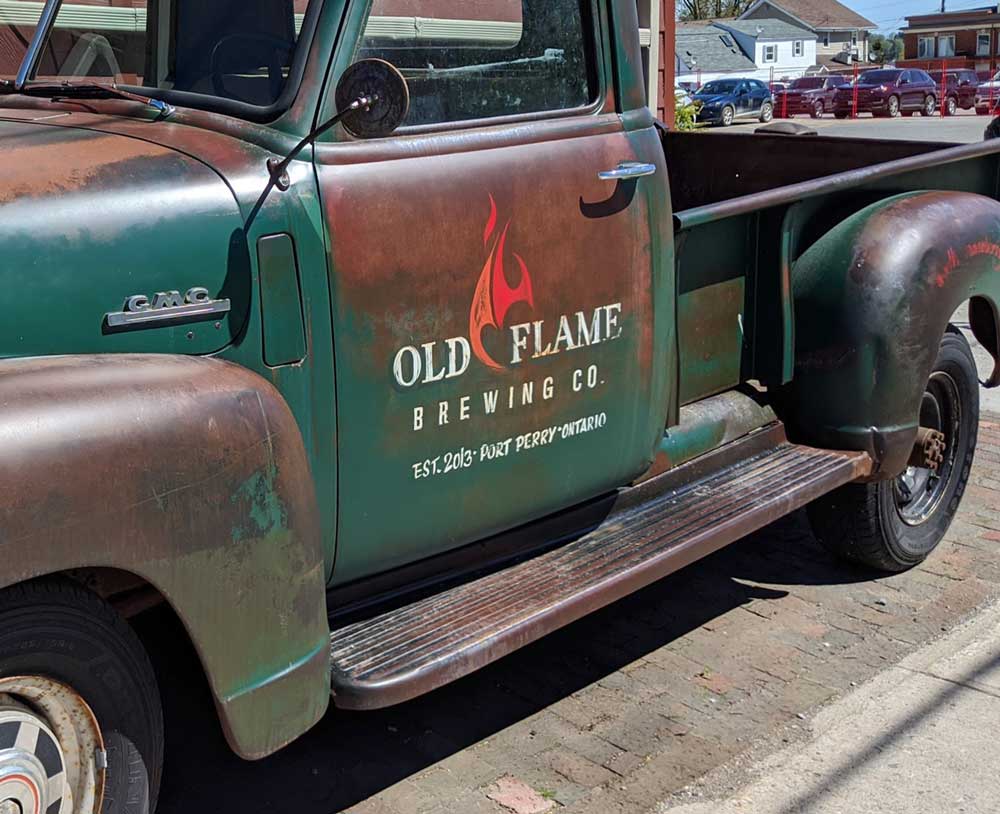 Another locale that has been recognized provincially and nationally for their product is the Old Flame Brewery. This is a very popular spot to taste some beer, listen to music, eat great food from local caterers and just socialize – when we were allowed to gather in crowds. They adjusted their plan quickly – offering free delivery and curbside pickup for local beer enthusiasts. All of these main street merchants have been successful at making Port Perry a day tripping destination, as is the beautiful waterfront, impressive historic homes and local fishing spots. 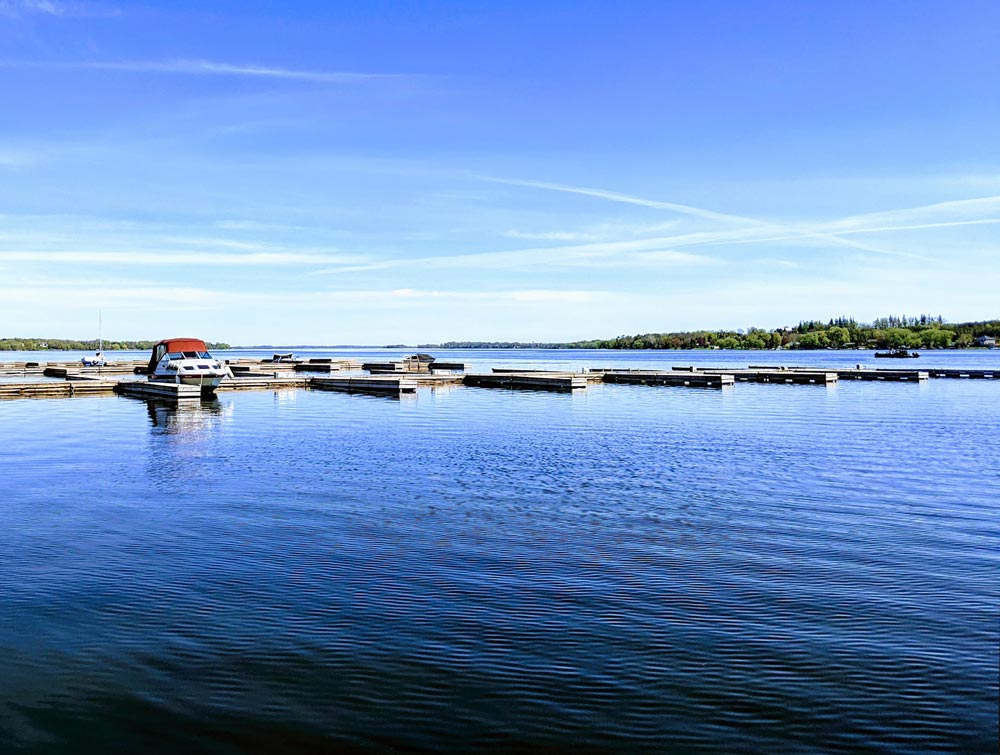 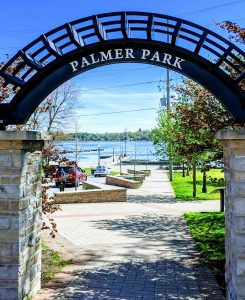 Palmer Park in Port Perry is named after a man who most certainly would have had a strong opinion about the current situation.
. . . . . . .

Early on in the pandemic this small town was eerily quiet and devoid of people. As the weather warms and some restrictions are lifted, visitors are returning to town – creating some new concerns. Parks are starting to fill up, often with people who have driven here to enjoy the scenic waterfront or try their luck at some shoreline fishing. Like other places this is causing some physical distancing issues, as is the lack of any public washrooms. The local Tim Horton’s – a “go to” spot for dozens of motorcyclists who have traditionally driven here from the city, is obliged to rope off the parking lot to discourage people from hanging out. The very attributes that attract people to this scenic little town are causing a new kind of tension during this troubling time. 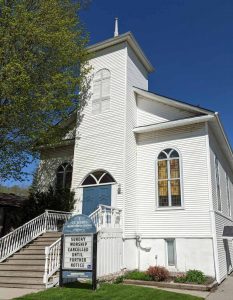 The days of lengthy road trips across this vast, beautiful nation have been temporarily put on hold. Instead, we are being obliged to discover our local streets, and try to promote resiliency in our neighbourhoods to make sure the places that we value make it through this crisis. Though the phrase ‘think globally, act locally’ was created as a mantra for the environmental movement, it is relevant in this crisis as well as we have to keep our eye on an invisible, planetary threat to our health; while we try to keep our locale healthy as well. Get out and enjoy it while you can, and dream of a time of road trips as well. 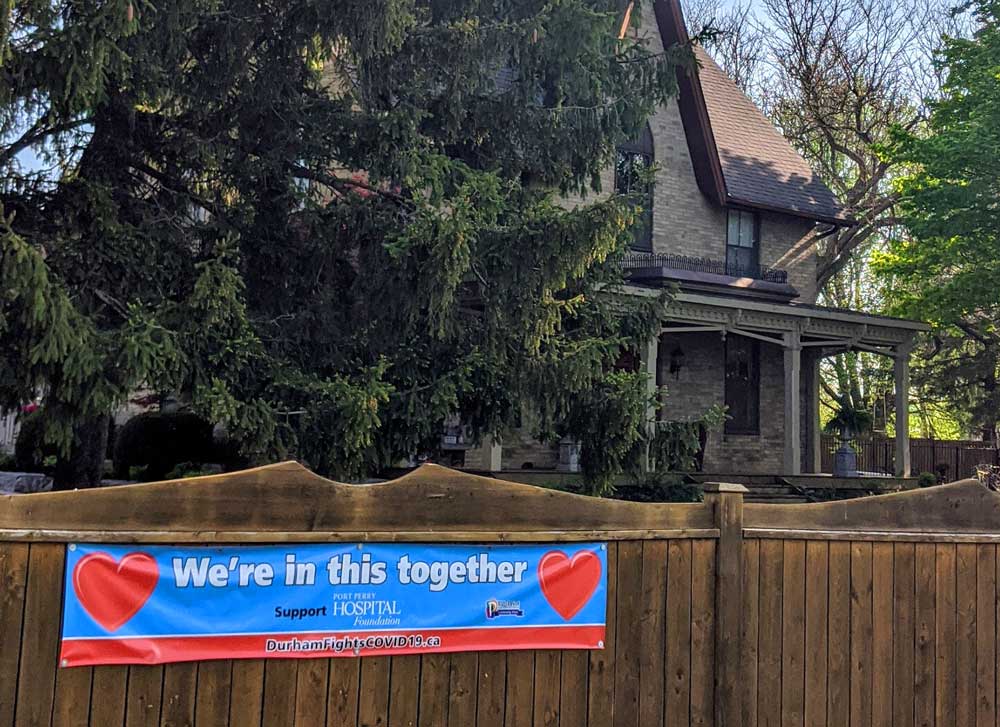