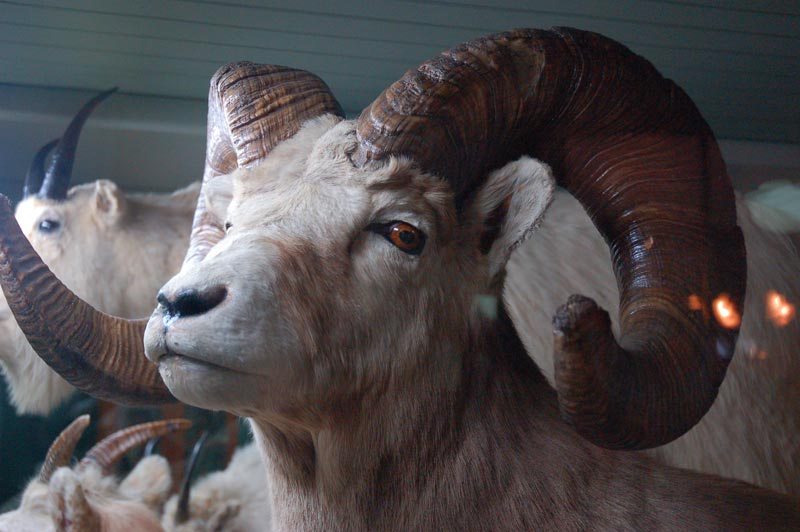 A recent New York Times article ranked Banff, Alberta as one of the five best places in North America for spring skiing. But what if you don’t ski? Is Banff worth visiting? We think so based on a March trip we did a couple of years ago. 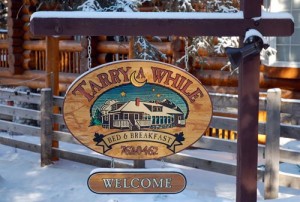 We chose a bed and breakfast a couple of blocks from Banff’s main street. When I booked, I had no idea of the fascinating history behind Tarry-a-while. It was built in 1912 for Mary Schaffer, an early woman explorer of the Canadian Rockies. Mary, a Pennsylvania Quaker, married University of Pennsylvannia botanist, Dr. Charles Schaffer. In the 1880s, the Canadian Pacific Railway had just been completed. Dr. Schaffer was keen to write a book on alpine wildflowers so in 1889, he and Mary traveled by train to the Banff, Lake Louise and Glacier areas of the Canadian Rockies. Obviously impressed by what they saw, they returned to the Rockies every year for the next decade. Both collected and pressed flora specimens. The doctor then documented what he found while Mary painted, illustrated and photographed their finds. When Schaffer died in 1903, the much younger Mary decided to carry on their work and in 1907, Alpine Flora of the Canadian Rockies was published. A second book, Old Indian Trails of the Canadian Rockies, based on Mary’s explorations around Jasper’s Maligne Lake, came out in 1908. Assisting Mary with her work was a mountain guide named William (Billy) Warren. He taught Mary how to ride and enjoy camp life and eventually they married. Billy built Tarry-a-while. Based on our stay in this magnificent heritage home, I have to believe it was a labour of love. 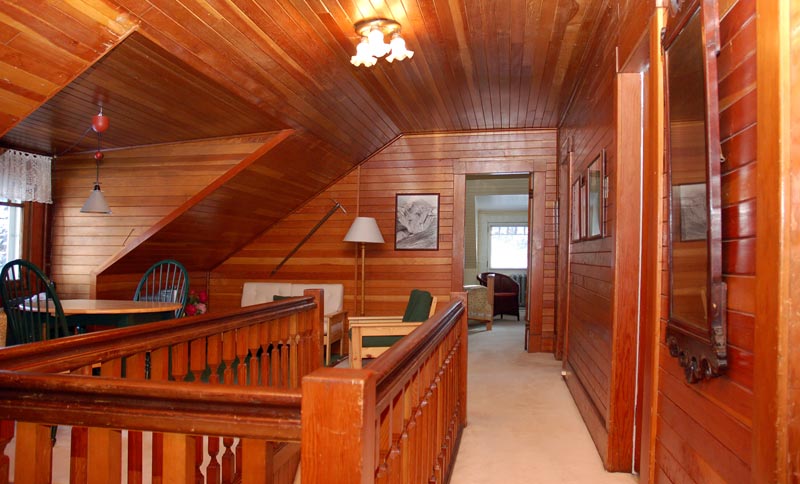 I adored Tarry-a-while and was impressed with Mary Schaffer’s artistic ability. Several reproductions of her art hang on the walls of the heritage B&B, however most of her original work is found in the Whyte Museum of the Canadian Rockies. This art museum began as a private studio. Historically, I discovered it is connected to the Boston School of Fine Arts. Today, over 4000 works relating to the visual arts of the Canadian Rockies are here, including painting, drawing and some outstanding historic and contemporary photography. Exceptional artists still travel here from around the world to create and perform new works at the Banff Centre for the Arts.

Our quirkiest Banff find was the Banff Park Museum, a national historic site. Run by Parks Canada, the museum web site states: “In February, 1895, a shipment of mounted and labelled specimens arrived in Banff. It included eight mammals, 259 birds, a turtle, 57 specimens of wood, 814 plants and 201 mineral samples… an almost complete representation of the birds and flowering plants found within the limits of the park”. The collection was featured in the Canadian Pavillion at the 1893 Chicago World Fair. When the fair ended, everything was crated up and sent back to Banff. Further specimens were added but what you see today largely characterizes museum practices of the early 20th century. Banff National Park needed something to house the collection so, using Douglas Fir, it constructed an architectural gem of a building. It is the oldest park building maintained by Parks Canada, dating back to 1903. 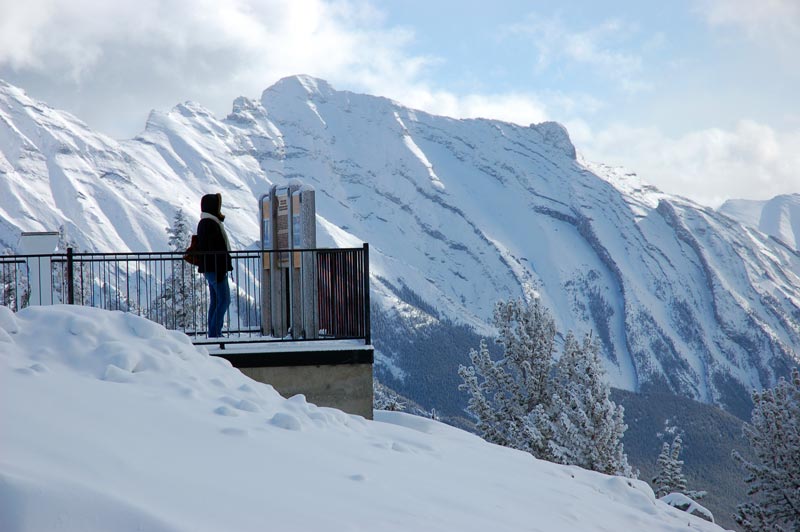 High above Banff, Alberta, from the top of Sulphur Mountain, in the Canadian Rockies

From quirky, we moved on to cheesy or what we assumed would be cheesy. But we were wrong. The Sulphur Mountain gondola ride was breathtaking and turned out to be an incredible Rockies photo op. It was a crisp, clear March morning when we rode to the top of Sulphur. The summit was a lot colder than Banff and Glenn wasn’t sure his camera would work in the sub-zero temperatures but these pix prove otherwise. At 7,486 feet (2,281 metres), we felt like we were on top of the world. 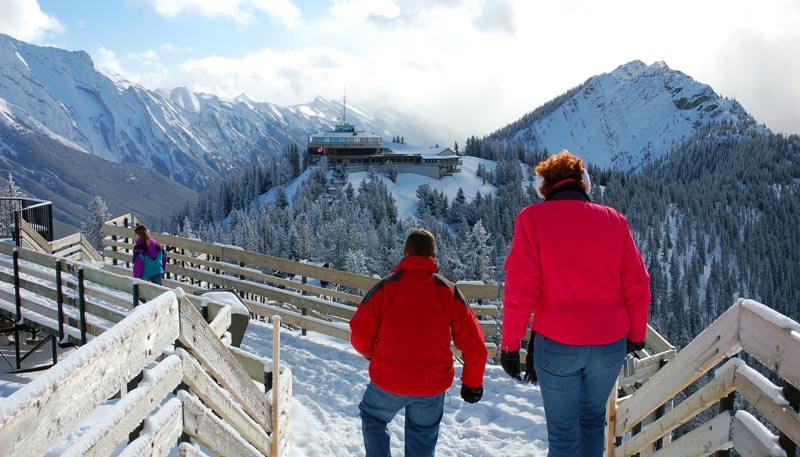 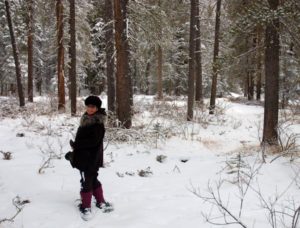 Later, we rented snowshoes from the Fairmont Banff Springs Hotel and hiked trails through a wooded area adjacent to the Banff Springs Golf Course. The area is part of a massive wildlife migratory corridor. We didn’t see another soul on the trails and word had gone out the day before that a cougar had been sighted (rare, but they can happen in these parts). Several times, I caught myself stopping and looking back over my shoulder. No cougars, but we did see elk on the course and lots of wildlife tracks. 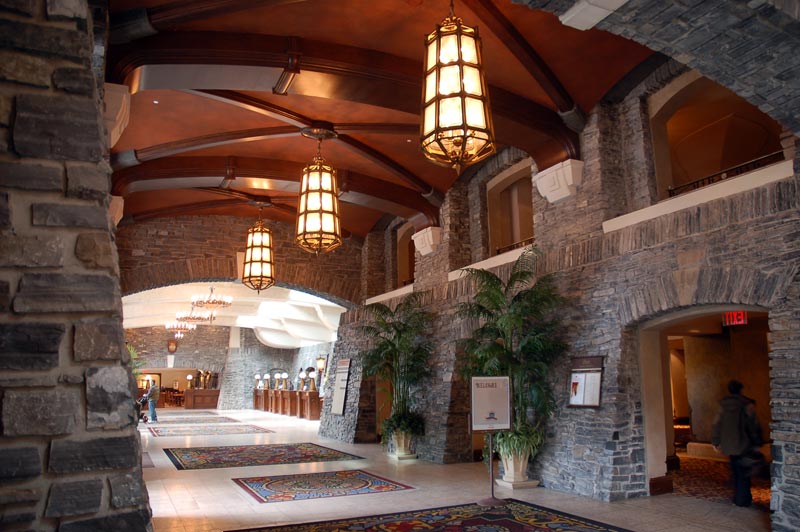 Following Afternoon Tea at the Banff Springs Hotel (a treat if you don’t want to break the bank), we headed to Banff’s earliest tourist attraction, the Upper Hot Springs. First Nations sought these waters long before they were discovered by Canadian Pacific Railway workers in 1884. Spas back then were just as popular as they are now and the discovery of hot springs in Canada caused a sensation across the country. Within a year, Banff National Park was created. I am fascinated by Canada’s tourism history and although I have traveled through Banff many times, I had never visited its Upper Hot Springs. They didn’t disappoint. Kudos to Parks Canada! It has restored the Upper Springs’ heritage bathhouse to its former 1932 glory, a time when the Upper Hot Springs rivalled the famous European spas of that era. 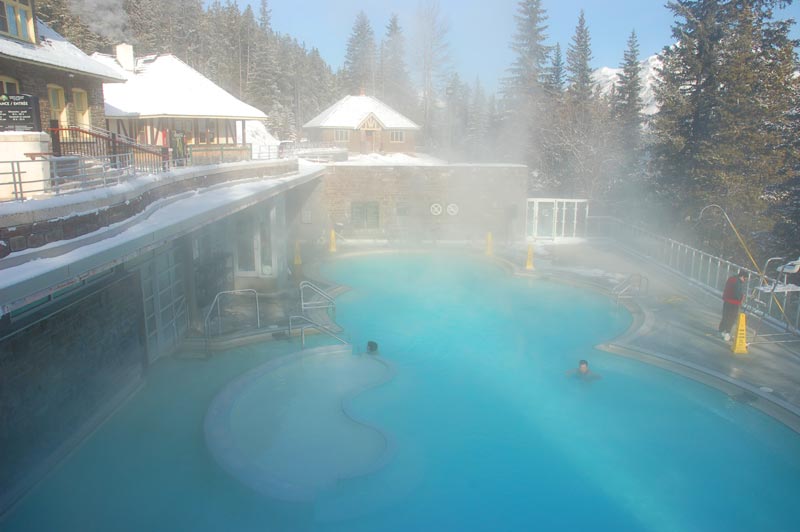