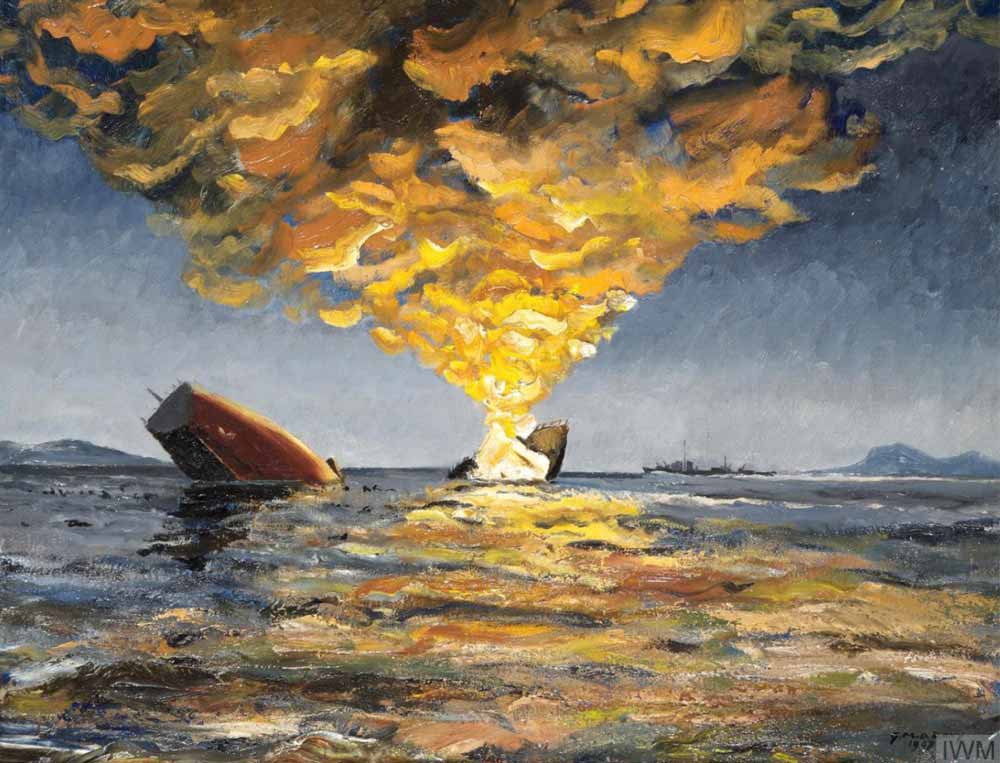 This maritime tragedy led to an act of philanthropy that has breathed life into a nondescript turn-in-the-road called Blackwater, Ontario, and a surprising tribute to a young officer killed long ago and far away.
…….

On the 24th of October, 1943 the British destroyer HMS Eclipse hit a mine in the Aegean Sea, breaking in two and sinking in five minutes with the loss of 119 sailors and 134 soldiers from the Royal East Kent Regiment. On board this ship was a member of the Royal Canadian Naval Volunteer Reserve, Lt. Douglas Bond Symons – the son of David and Frances Symons of Toronto and brother to Katherine. No one could know at the time that this tragedy led to an act of philanthropy that has breathed life into a nondescript turn-in-the-road called Blackwater, Ontario. 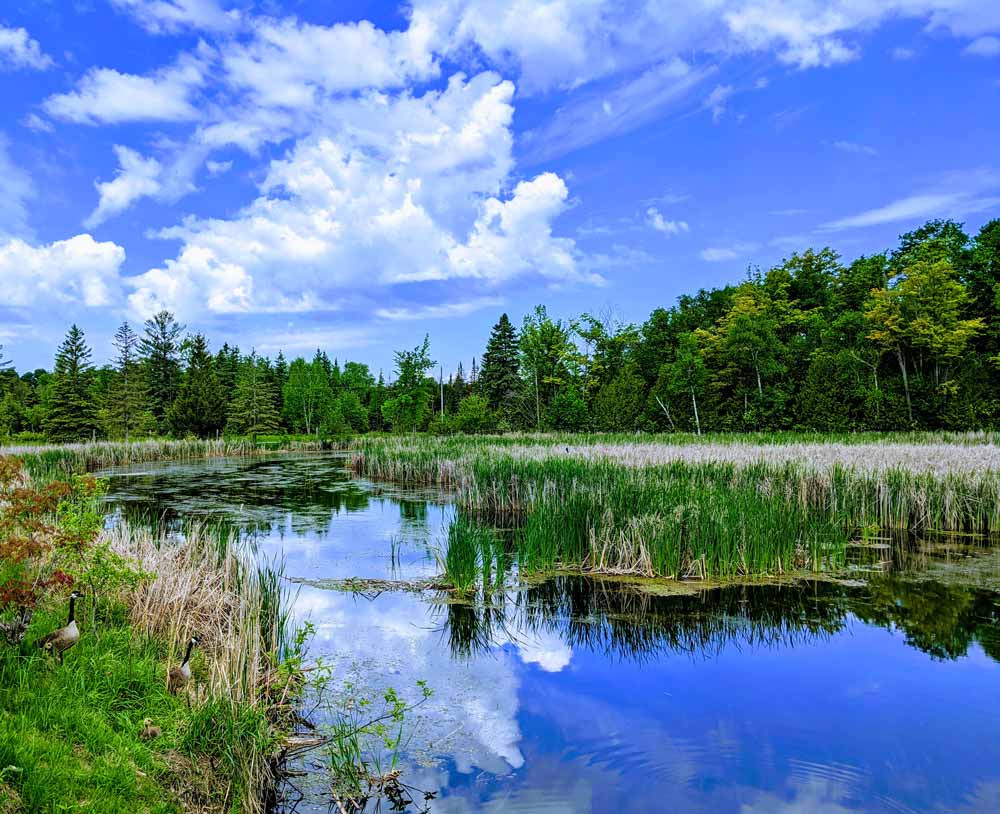 Part of the extensive Beaver River wetland near Blackwater Ontario. – All photos by Brian Robert except where indicated
. . . . . . .

Blackwater is a tiny hamlet strung out along Highway 12, about one hundred and twenty kilometres north and east of Toronto. Originally called Wick Station, Blackwater is surrounded by a very large wetland, with a number of gravel pits to the west and north. The only reason anyone ever settled in this poorly drained swamp was that the Toronto and Nipissing railway was built along the flat banks of the Beaver River that winds through these wetlands. An audacious scheme fronted by Mr. George Laidlaw, this railway was supposed to go from Toronto in the south to Nipissing in the north to ship grain to the Gooderham and Worts Distillery in Toronto. 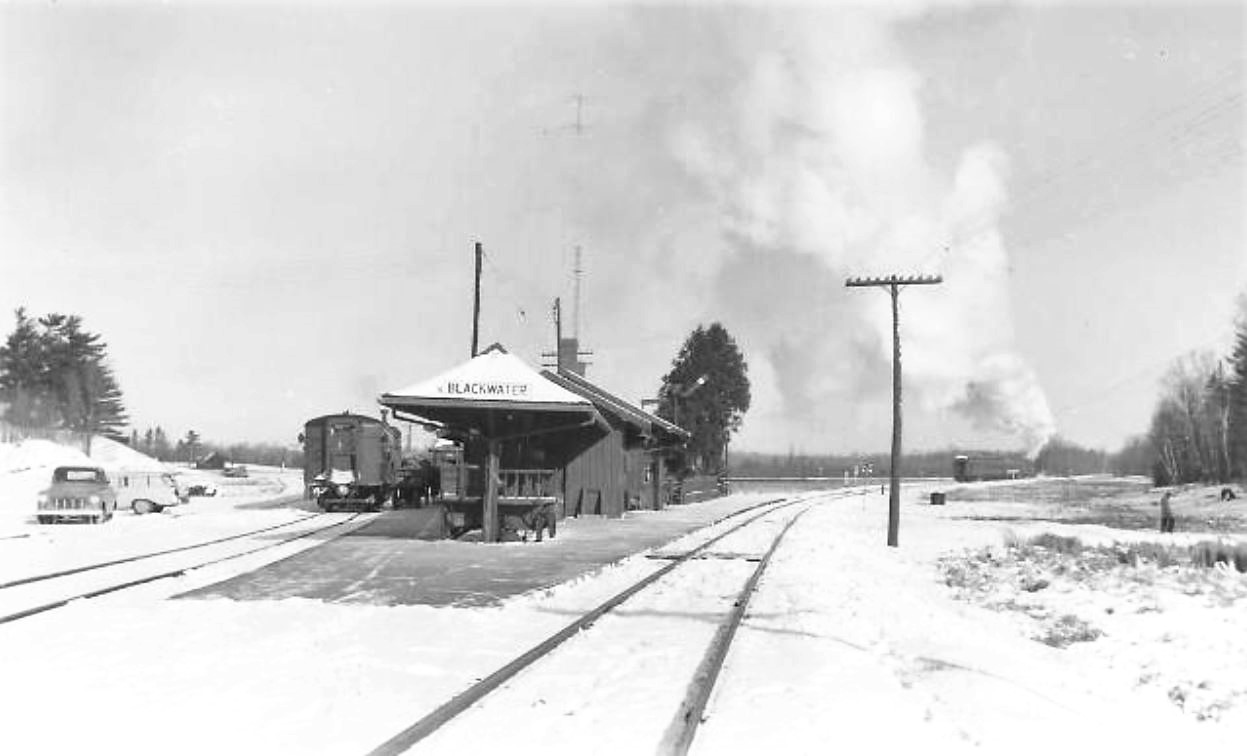 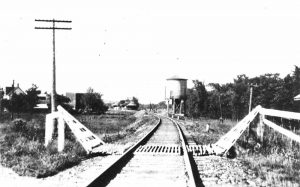 A July 1926 photo showing the water tower and station in the distance. Lindsay would be in the opposite direction the photographer is facing. Note the turret on the station which doesn’t appear in any other photos. Photographer unknown.
. . . . . . .

The first narrow gauge railway in North America arrived in the area by 1872 with the intent to continue north to join the CPR trans-continental line near Lake Nipissing, but this ambition was never achieved as the line went no further north than Coboconk. ‘Blackwater Junction’ became a strategic Y junction of this rail line, where the line split with one branch heading north to Cannington then Coboconk, and the other line veering east to join the five rail lines that ran through the important hub in Lindsay. 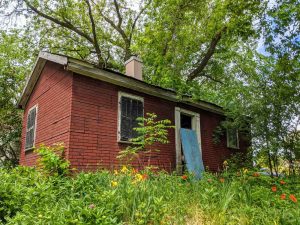 Section houses, a railway station and a fueling and watering facility were established at this important junction and a small railway town emerged from the marsh. In its glory days, the station included a lady’s parlour, quarters for gentleman and even a full-service restaurant. Trains travelling from Lindsay would stop for up to twenty minutes at the station. Trains travelling from the west would clear the station and passengers would either carry on to Toronto, or take one of six trains a day that went either north to Sunderland and points beyond or east to Lindsay. Blackwater boomed. 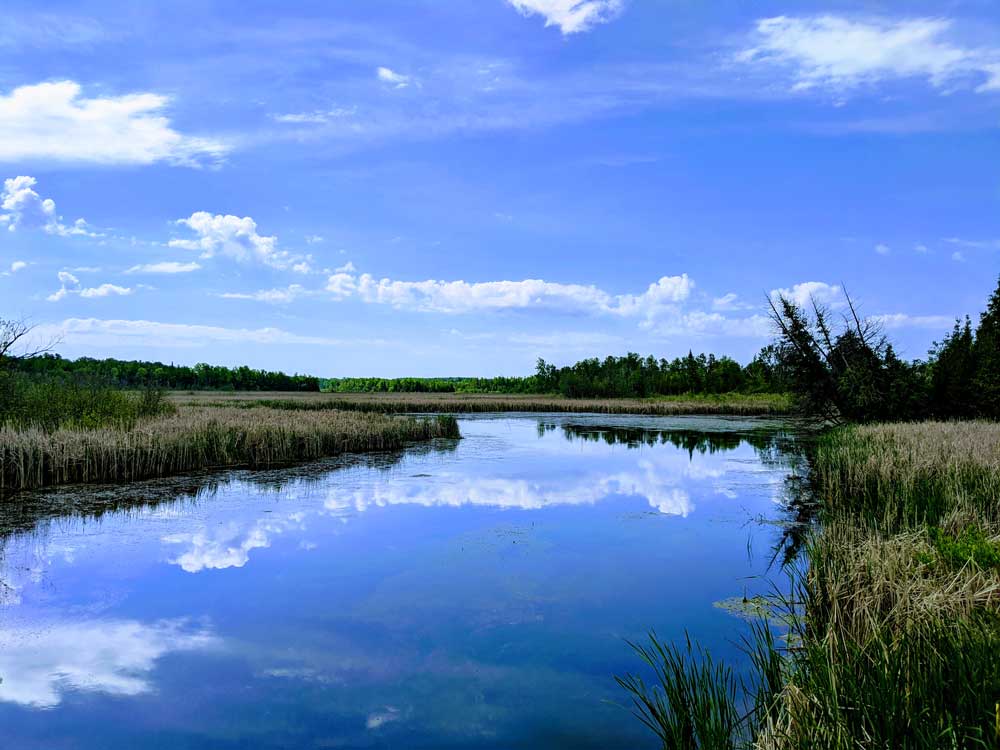 Like many pioneer railways, the TNR went through a series of consolidations with competing lines, eventually being absorbed by the much larger Grand Trunk Railway by 1884. Two mills set up shop in town, and a stockyard was built to ease the shipment of livestock from the local farms to market. A nearby inventor is given credit by locals for coming up with a revolutionary way of processing a local crop, revolutionizing the life span of the humble rutebaga. 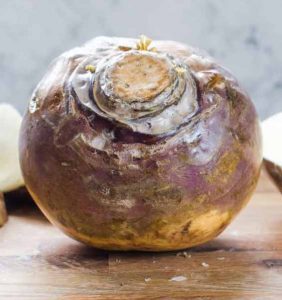 J.H. Purvis of neighbouring Pinedale stumbled upon the idea of waxing turnips, and set up a factory to process the crop to lengthen its shelf life, and extend the market by shipping it by train. The factory was located right by the tracks in Blackwater, comprised of a multi-level series of ramps that could wash, dry then wax the turnips on a gravity fed system. The Blackwater Turnip Factory was a success, but Purvis balked at the trouble and expense of filing a patent for his invention, permitting competitors to take his idea and refine it. Increased competition priced the Blackwater factory out of business and it eventually closed its doors. The building disappeared in a mysterious fire in 1974, all but erasing any evidence of this pioneer industry. In its heyday fifty freight cars a year of waxed turnips made their way out of Blackwater to markets all over North America. 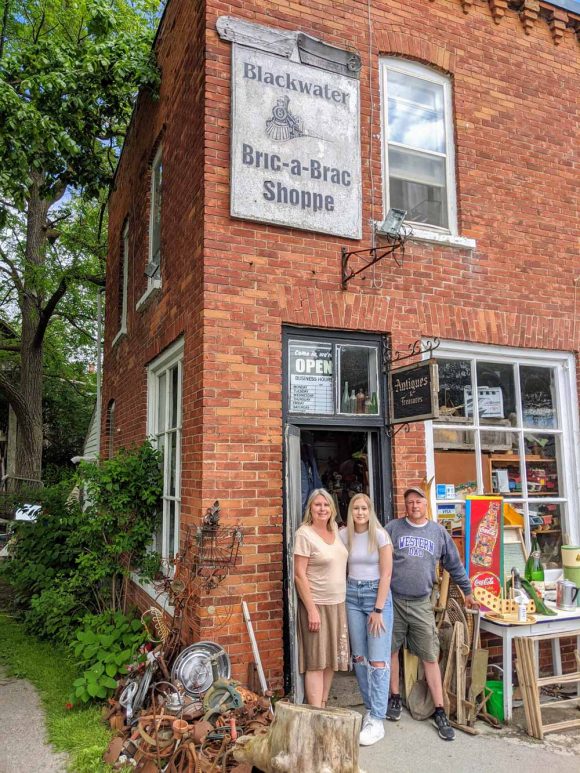 Another focal point of town was the general store called the ‘Allin store’ after the family that operated it for sixty years. Like many general stores, this one was a miniature department store selling a wide range of products as well as housing the post office. The store also served a vital social function as a gathering spot for a variety of local characters who assembled to talk politics, tell jokes and chew tobacco. They became known as the “Hot Stove League” as they tended to cluster around the wood stove, and an occasional stray spit of ‘chew’ would hit the stove and sizzle away. The store still stands; though now it is an eclectic, seemingly chaotic collection of antiques and artifacts called the Blackwater Bric-a-Brac Shoppe, owned and operated by the Mann family for the last thirty years. 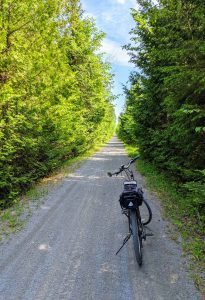 The Grand Trunk Railway went bankrupt in 1923 and Canadian National Railway continued to operate two passenger trains a day as late as the 1970’s; but the glory days of this rail line were well behind it, and by the 1990’s the tracks were stripped away, leaving the rail bed behind. Abandoned, but not overlooked, the rail trail became part of another audacious plan as the line north of Uxbridge, through Blackwater and on to Lindsay and beyond, became part of the Trans-Canada Trail. The Lake Simcoe Conservation Authority acquired long stretches of this trail system with the intent to create a recreational corridor within the watershed of Lake Simcoe. 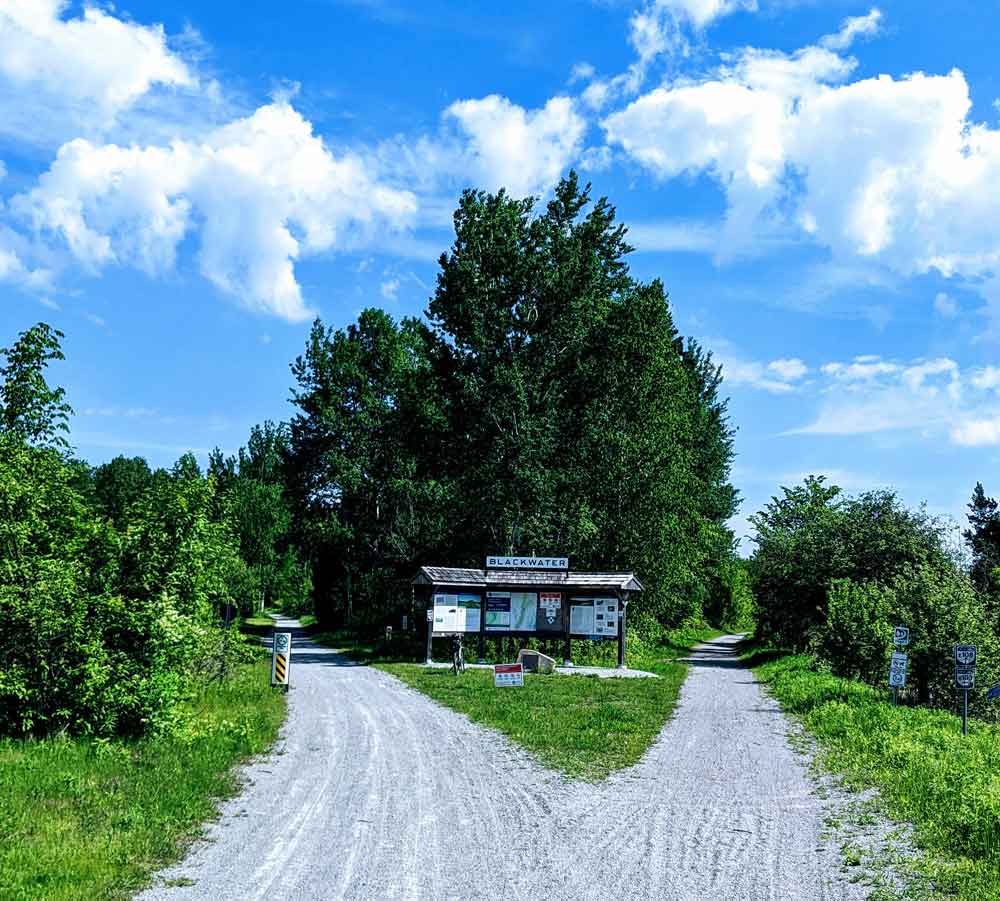 Blackwater Junction kiosk at the site of the original station at Y-Junction.
. . . . . . .

Enter Katherine Symons and her gift in honour of her brother Douglas. 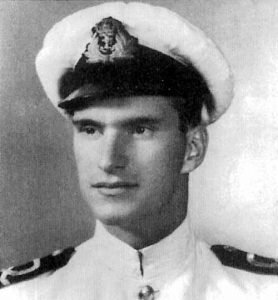 In 2005 the Lake Simcoe Conservation Foundation, recipient of a generous bequest from Katherine Symons, acquired five hundred acres of provincially significant wetlands in and around Blackwater to assist in the preservation and restoration of twenty percent of the watershed of the Beaver River, an important source of water for Lake Simcoe. This contribution spurred additional efforts to rehabilitate the old rail beds, and the majority of the old rail line has been graded and resurfaced with crushed limestone, making it an excellent all-season corridor for people to enjoy this rich ecosystem. 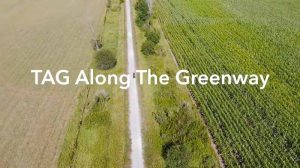 Blackwater is a feature in another bold venture. Plans are well underway to create a “Toronto-Algonquin Greenway”, envisioned as a hike, bike and paddle route for those looking to explore a different view of Ontario. This four-hundred-kilometre tribute to ‘slow travel’ is an opportunity for travellers to make their way from the hustle and bustle of downtown Toronto to the highlands of Haliburton, and will pass right through Blackwater and the Beaver River Wetlands. This low impact, sustainable approach to a road trip is gaining in attention and has a promising future. 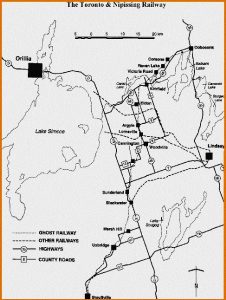 The railway station that was the central asset of Blackwater was demolished in the early ‘60’s, and the land sat idle for decades. The place that was founded during the railway era, that became a tiny speck in the Trans-Canada trail map and now a feature of the Toronto-Algonquin Greenway continues to defy the odds. An impressive interpretative kiosk was erected in the last couple of years in the middle of the Y junction, where the station used to reside. Traffic is starting to increase again, especially during COVID times, as people look to get out without going far away, or getting close to others. A hundred or so metres east of Highway 12 sits the kiosk, and a surprising tribute to a young navy officer killed long ago and far away, lost but not forgotten by his sister, and their mutual love of nature. 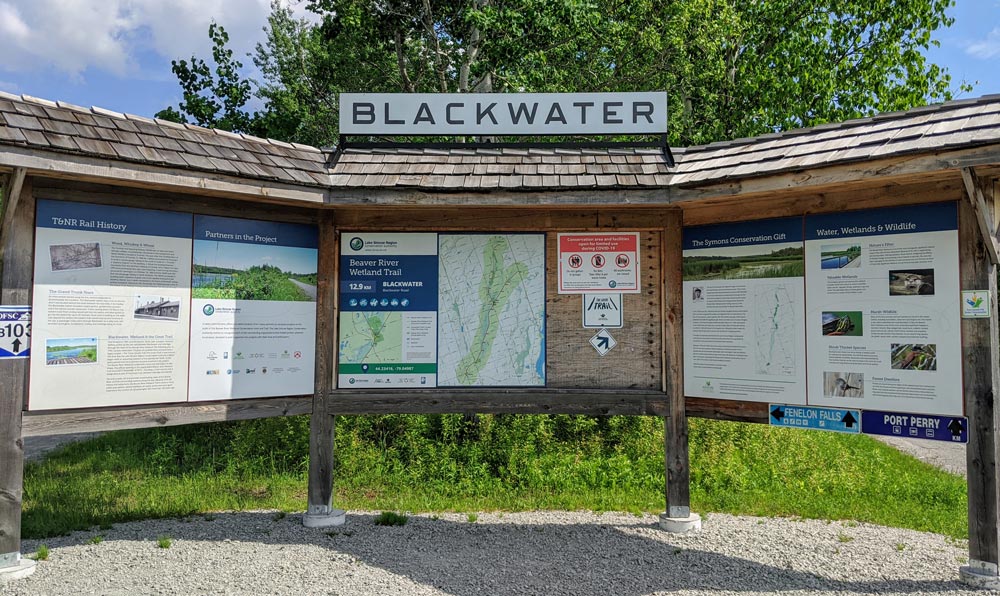