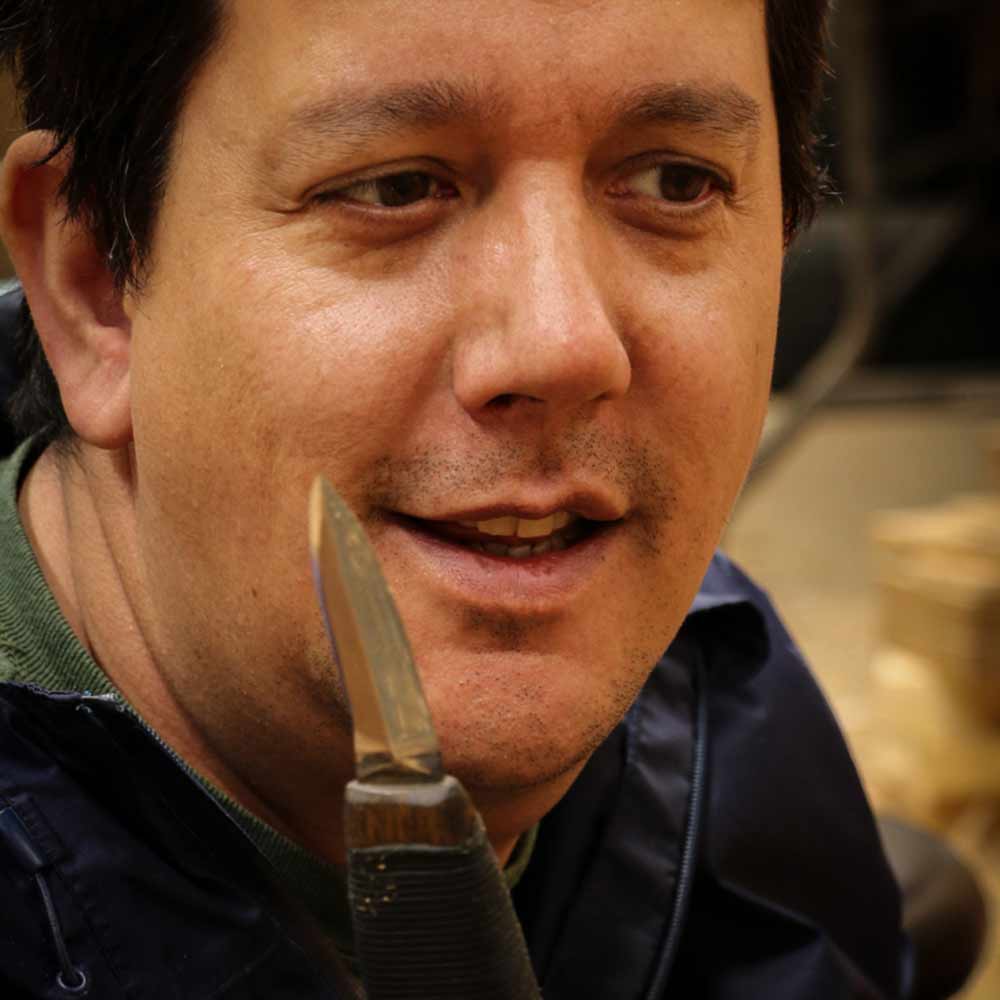 In 2008, Carey Newman, an artist of the Kwakwaka’wakw, Coast Salish and settler heritage, took an old-growth log on an epic journey. Aided by a small team that included his father Victor, also a carver, he visited about 55 communities in all corners of British Columbia. At each stop members of the public helped carve the Spirit Pole.

For a 33-year-old it was an enormous responsibility, an ambitious project. Newman estimates that over 11,000 people contributed to transforming the pole into a towering work of art, which was raised in Duncan at the opening ceremonies of the North American Indigenous Games. 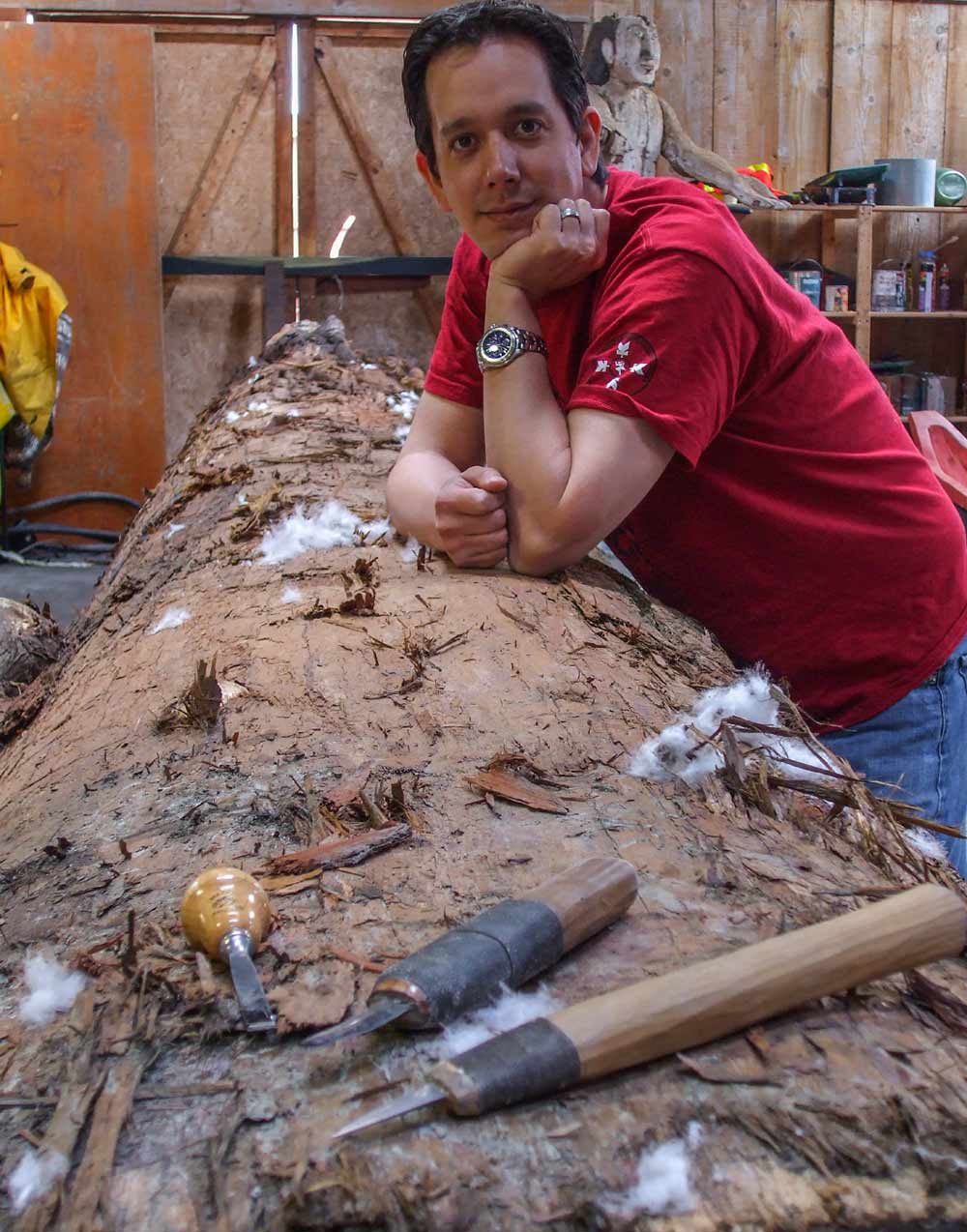 In 2009, Carey tackled another megaproject when he was selected to create an art installation for the 2010 Olympic Games. His piece entitled “Dancing Wind,” consists of four large panels, made from stainless steel, cedar and glass representing wind directions, animals, and colours related to the medicine wheel.

In the decade since then the talented Newman, who grew up in Sooke but now lives in Victoria, has gone from one success to another. His work is much sought after and has been acquired by corporations, government agencies and museums around the world. He is living up to his Native name, Ha-yalth-kingeme, which means Face of a Chief. 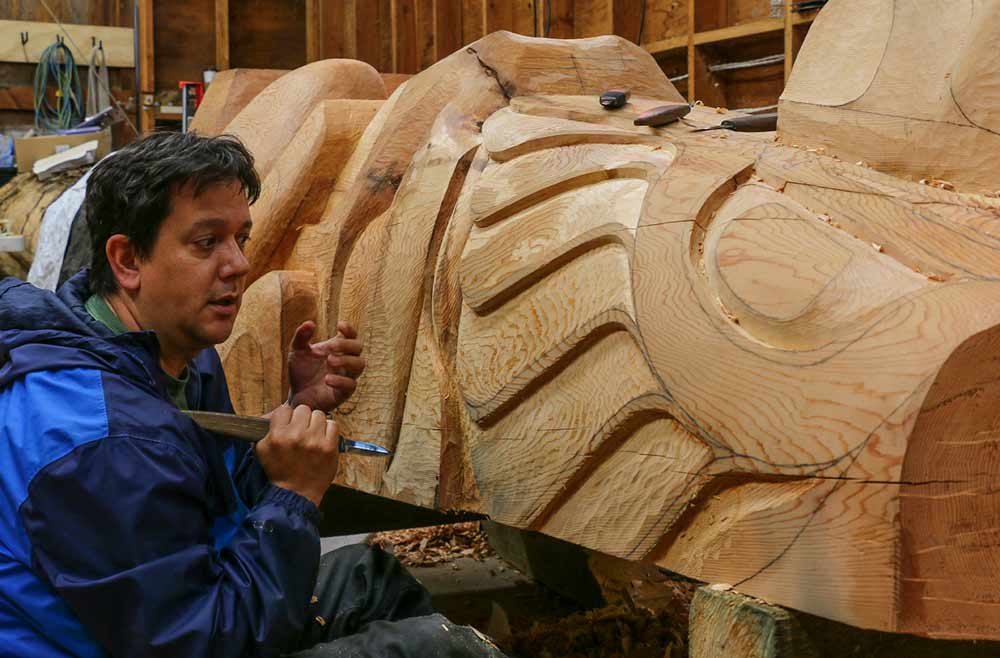 Recently, I visited Carey at his spacious carving shed on the Tsawout Reserve in Saanich where three large crates containing his totems were being loaded onto a truck for shipment to Germany.

A tall, clean-shaven, good-looking man with black hair, Newman has a ready smile and a subtle Native humour. He explained how training in art has been by the Native method of mentoring and apprenticeship rather than formal courses. This was relatively easy since he comes from a family of carvers: his father Victor; his great-grandfather Charlie James; and his great-aunt Ellen Neel.

And, surprise, he’s also a musician! Newman, who studied piano at the University of Victoria and voice at the Victoria Conservatory of Music, had a brief singing career before deciding to pursue visual art exclusively. 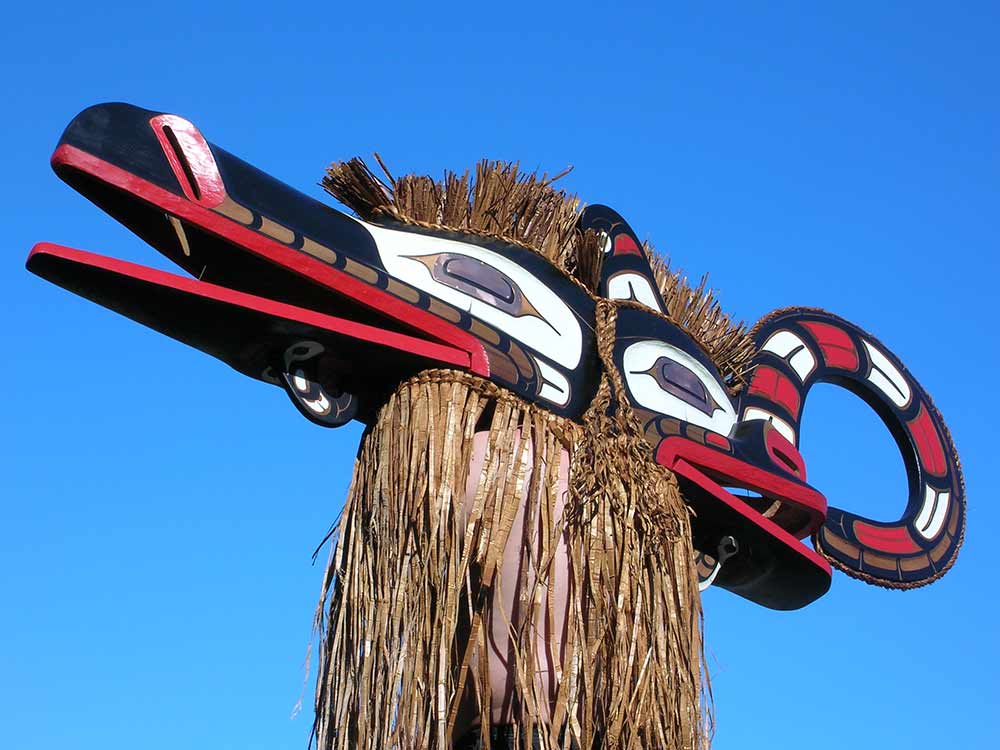 Showing me a cedar log, he said, “I’m careful to adhere to traditional rules and values. Finding ways to innovate without disregarding history is important to me.” He explained that he loves working with cedar for it is a central element of indigenous culture. “I’m deeply connected to the wood I’m working.” He strives to highlight either Indigenous, social, or environmental issues.

Newman is highly talented in many media including wood, stone, gold/silver, gems, glass and painting. His works were available at Blue Raven Gallery in Sooke from 1996 to 2018 when it was closed, not because of lack of sales, but because he did not have the time and his parents no longer had the energy to run it. 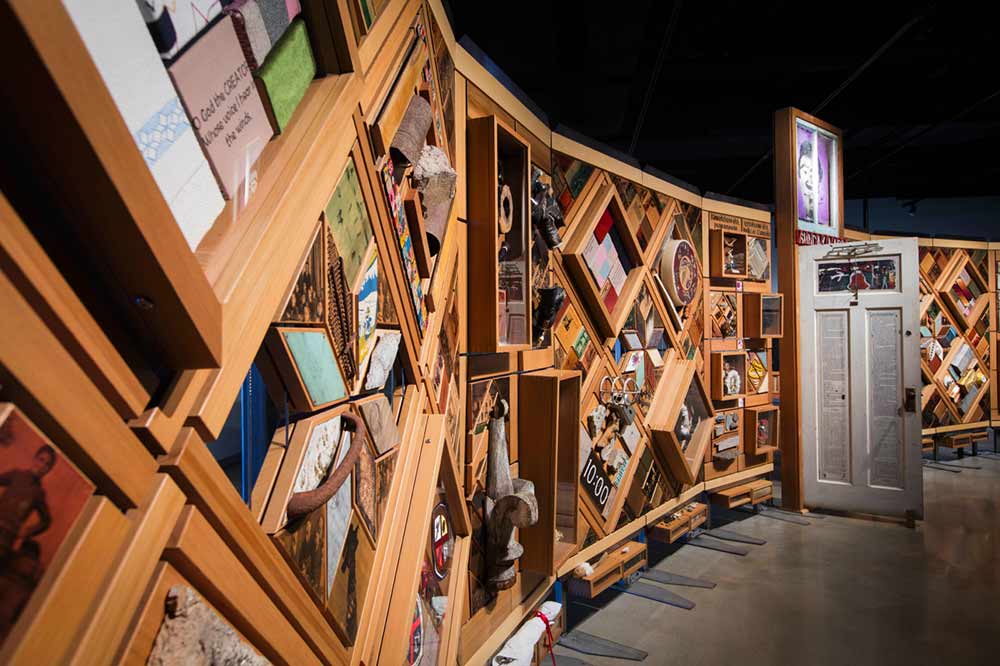 Newman’s most significant work, the 12-metre-long Witness Blanket, has become a national monument. Starting in 2012 he visited residential schools, churches, government buildings and cultural structures in 77 communities across Canada to collect 887 fragments of the residential-school era. “My dad is a survivor of the residential schools, which operated from 1870 to 1996 with 4,100 deaths, so I wanted to tell the story,” he said. It took more than a year to collect the pieces, which included a piece of strap, hair cut from a woman survivor, a door, a skate and much more. Then it took six months for Newman to assemble the fragments into a row of panels, a major art installation. 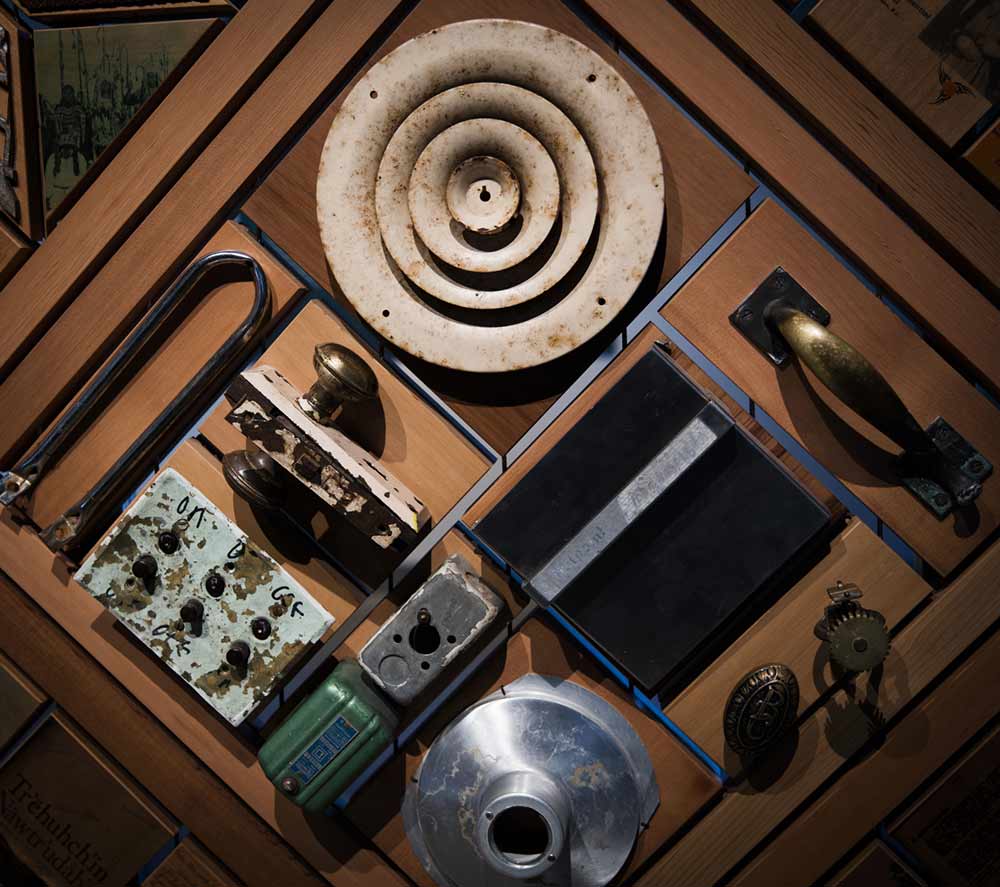 “The blanket is a universal symbol of protection.”

“For many of us, the blanket identifies who we are and where we’re from – we wear them in ceremony and give them as gifts.” The Witness Blanket is a moving and powerfully evocative way of remembering the residential-school era.

After touring Canada extensively over the past few years the Witness Blanket is presently undergoing conservation at the Canadian Museum for Human Rights in Winnipeg. A replica is being created, which will begin touring in May 2019. 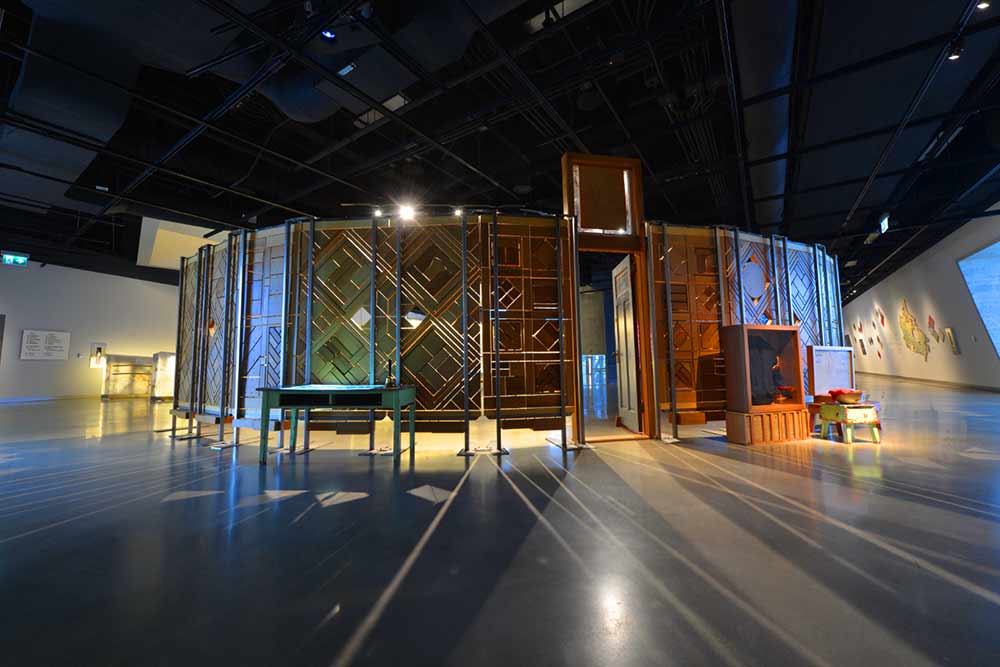 The Witness Blanket from behind – photo courtesy of the Canadian Museum of Human Rights.
. . . . . . .

Newman was awarded the Meritorious Service Medal in 2017. In 2018 he was named to the Order of British Columbia, in part, no doubt, because of the Witness Blanket. “It was a great ceremony,” he said, “but I felt conflicted because a lot of my work is critical of government.”

Recently Newman was appointed as the 6th Audain Professor of Contemporary Art Practice of the Pacific Northwest at the University of Victoria, a three-year position. “This is breaking new ground for me,” says Newman. “I’m looking forward to having the opportunity to convert the experience of mentorship into a more formal educational setting.” He is also working to establish a Centre of Excellence to study art and reconciliation as a legacy of the Witness Blanket. 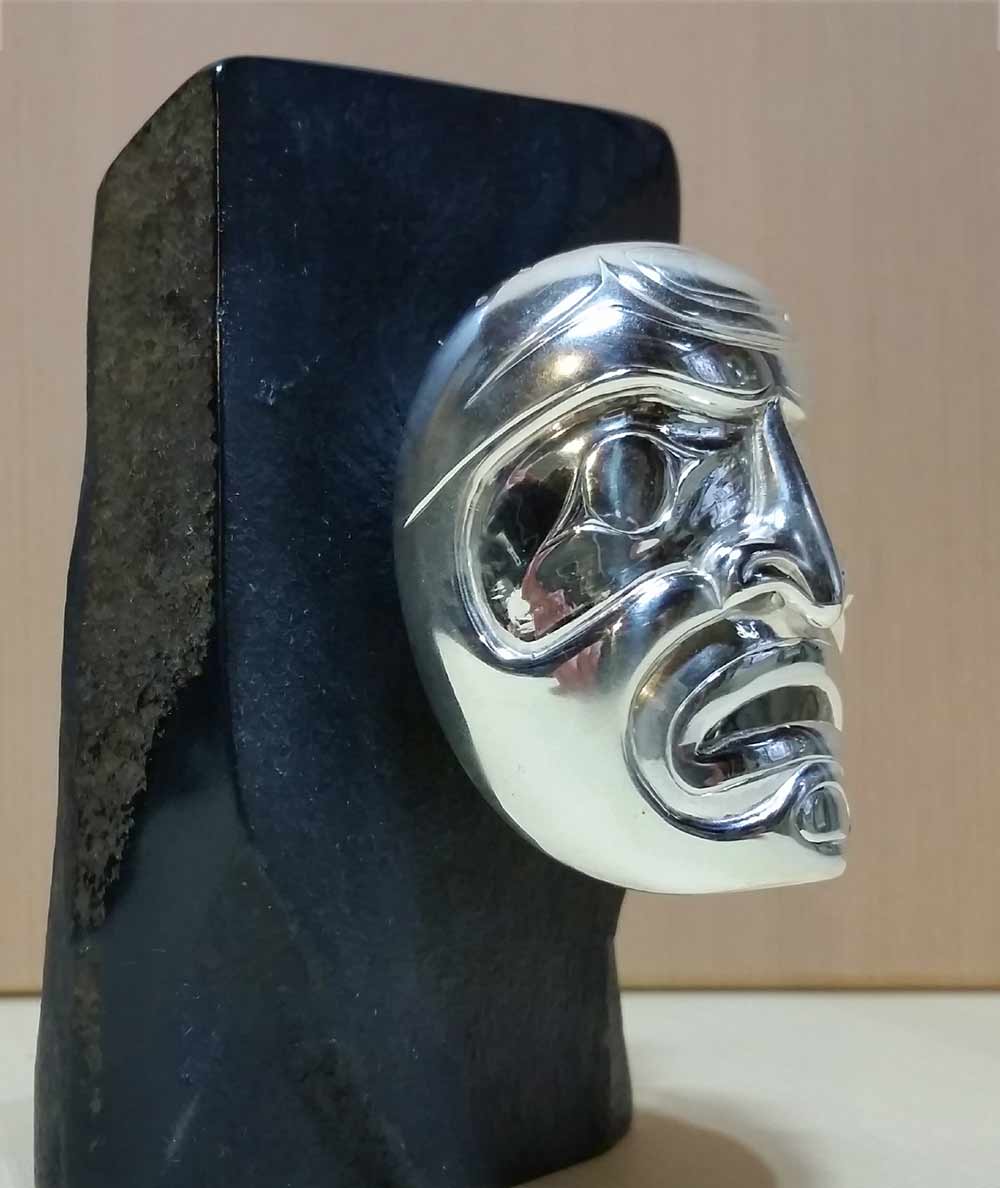 With his ability to work with many media, and to create major, thought-provoking pieces, Carey Newman is following in the footsteps of Bill Reid, arguably, the greatest Native artist of Canada.

Bill Reid and his Canoe