Wherever we road trip in Canada, we look for off-road trails to bike or walk. Here are nine of our favourites across the country. Six out of the nine trails are on The Great Trail of Canada …
……. 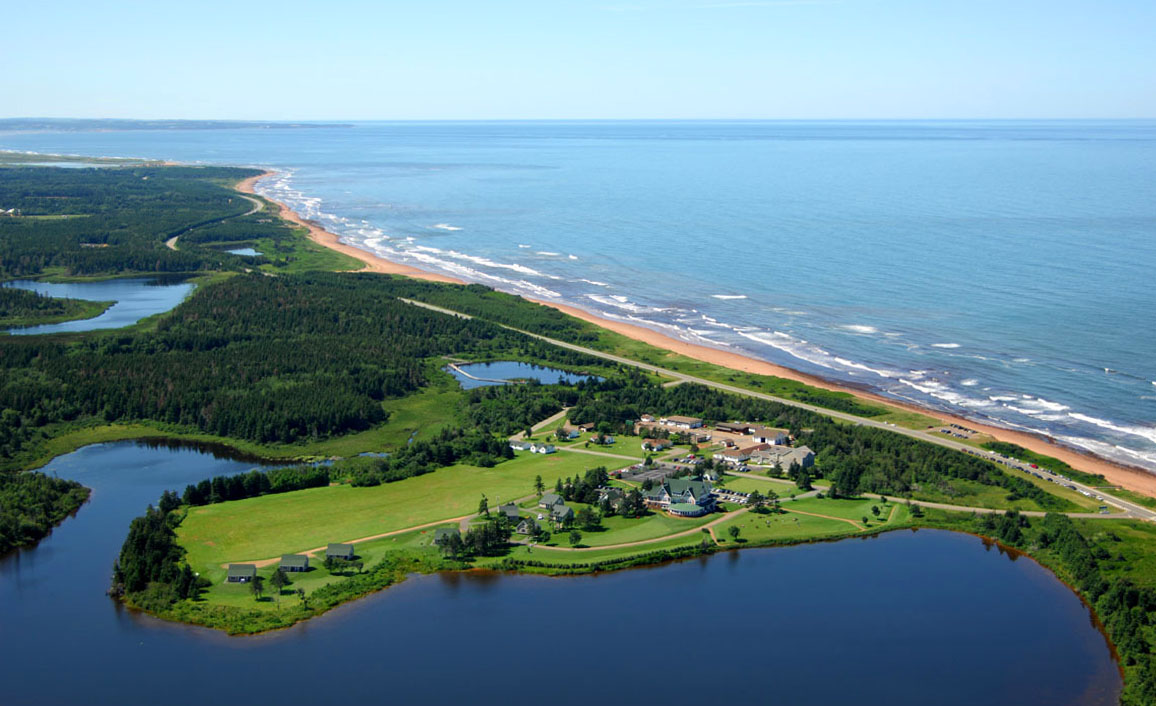 The Dalvay-by-the-Sea Hotel is a National Historic Site located on the north shore of Prince Edward Island.
. . . . . . .

I’ve walked the amazing beaches next to PEI’s Gulf Shore Way trail between Brackley Beach and Dalvay. During a conference in Charlottetown I rented a car and visited Prince Edward Island National Park on the island’s North Shore. Dalvay-by-the-Sea and its Sticky Date Pudding are here too. The late 19th century seaside home is a national historic site that operates as a summer inn. I loved it and I loved its pudding. The inn is right on the trail and it rents bikes. Just beyond the trail are the national park’s extraordinary beaches. 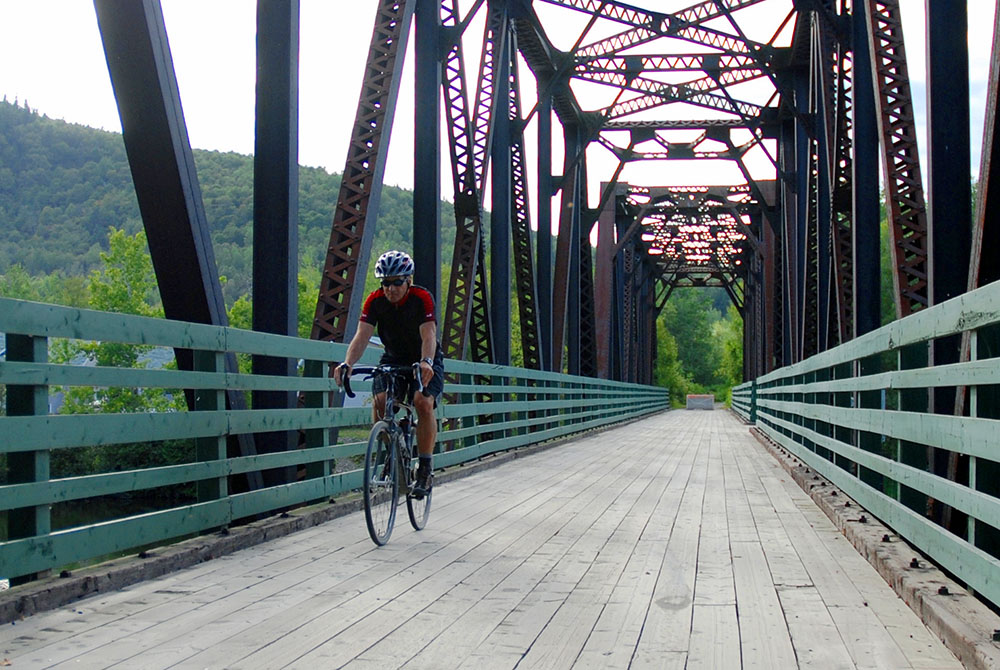 I bought a Trans Canada Trail plaque in memory of family who once lived in Edmundston, a city in the northwestern corner of New Brunswick. Last year we paid Edmundston a visit so I could take a picture of the plaque and the trail itself, which in this region is called Le Petit Témis. It’s a linear trail between Edmundston and Riviere du Loup, Quebec. We found both near the historic railway station in the centre of town. Edmundston Tourism runs the railway station renting out bikes and giving tips on local things. That’s where we first heard of the big mountain-bike culture here. A Moncton U campus, a college and a new regional health centre are fueling it. Even the Mayor of Edmundston is an avid mountain biker. IMBA quality trails criss cross the Appalachian range surrounding the city. If you’re looking for good eats, try Cafe Lotus Bleu. It serves a mean soupe du jour and sandwiches. 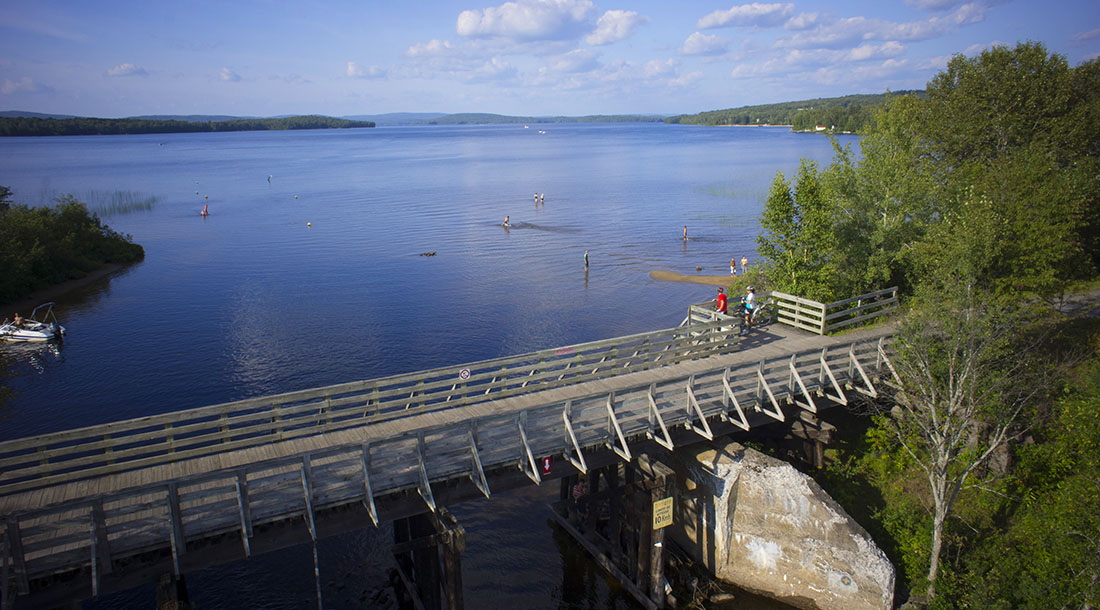 The P’tit Train du Nord is a 232 kilometre bicycle trail which runs on an old train bed through the Laurentian Mountains north of Montréal.
– Photo courtesy of Tourisme Laurentides
. . . . . . .

This is the perfect tour bike trail. A wide pebbled path follows an old railway bed beside the North River through the Laurentian Mountains north of Montreal. We chose the Ste Adele trailhead for the start of our ride. An outfitter rents tour bikes in an old railway station here and there’s a small cafe. Our ride up the trail was a slight incline but hardly noticeable. Outside the town of Val Morin, about twelve and half kilometres later, we stopped at another railway station with an outdoor cafe and enjoyed fresh croissant sandwiches and espressos. The ride back was a leisurely cruise with hardly any peddling. 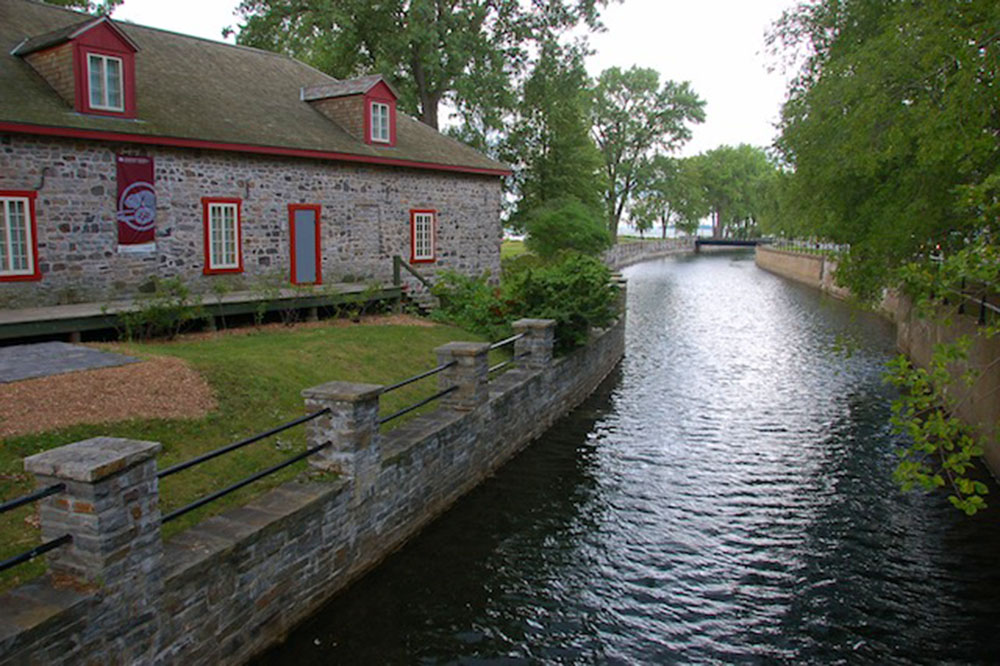 In bike-friendly Montreal, you see designated paths and rentals in every downtown neighbourhood. We chose the historic Lachine Canal for a ride. A paved path runs along the canal from Old Montreal to Lachine and Lake St. Louis, about 14 kilometres west. This is a beautiful ride. Enroute we picked up Quebec cheeses, fresh bread, fruit and veggies from Atwater Market and enjoyed a picnic lunch overlooking Lake St Louis. Outdoor cafes and food trucks are on the route too, so there’s plenty to choose from. 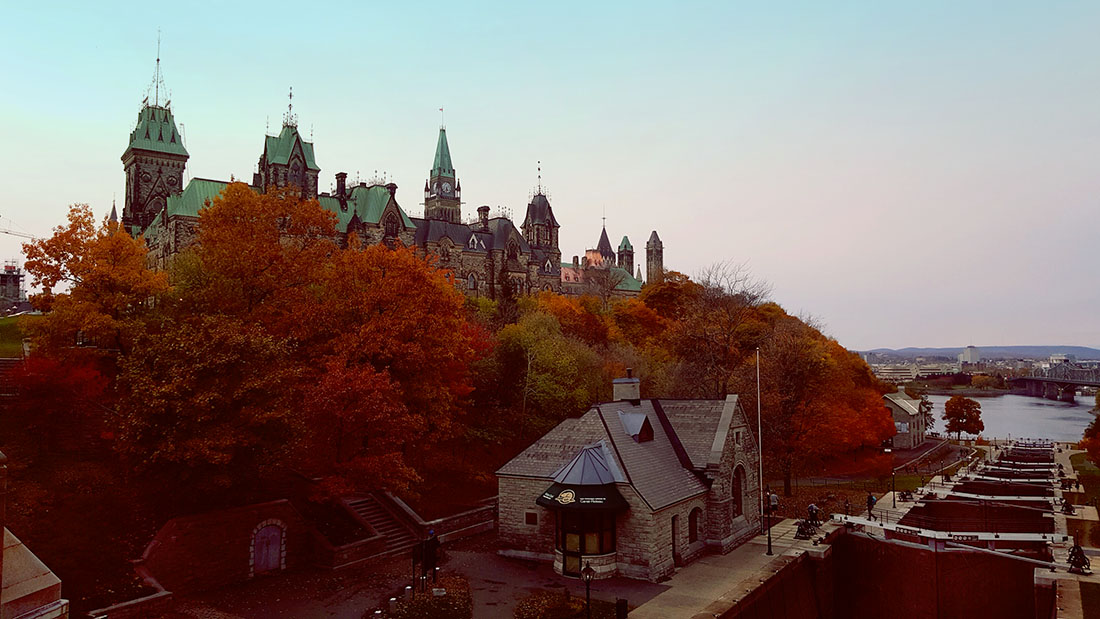 Locks on the Rideau canal near the Canadian parliament buildings, during fall colours in Ottawa, Ontario
. . . . . . .

Ottawa’s Rideau Canal Route is another fun ride. We found bike rentals under the Plaza Bridge at 2 Rideau Street. The canal winds from here south through the city. Rideau Street to Carleton University and back was about 13 kilometres. About 3/4 of the way to Carleton the canal widens and becomes Dow Lake. There was a lakeside pavilion here with washrooms and food services. Carleton U is just beyond it. We also passed The Glebe, a beautiful downtown Ottawa neighbourhood. It is also home to The Colonnade. I was first introduced to its pizza pie while going to school here. On our way back, we couldn’t resist and stopped for lunch. Their pie is still outrageously good. 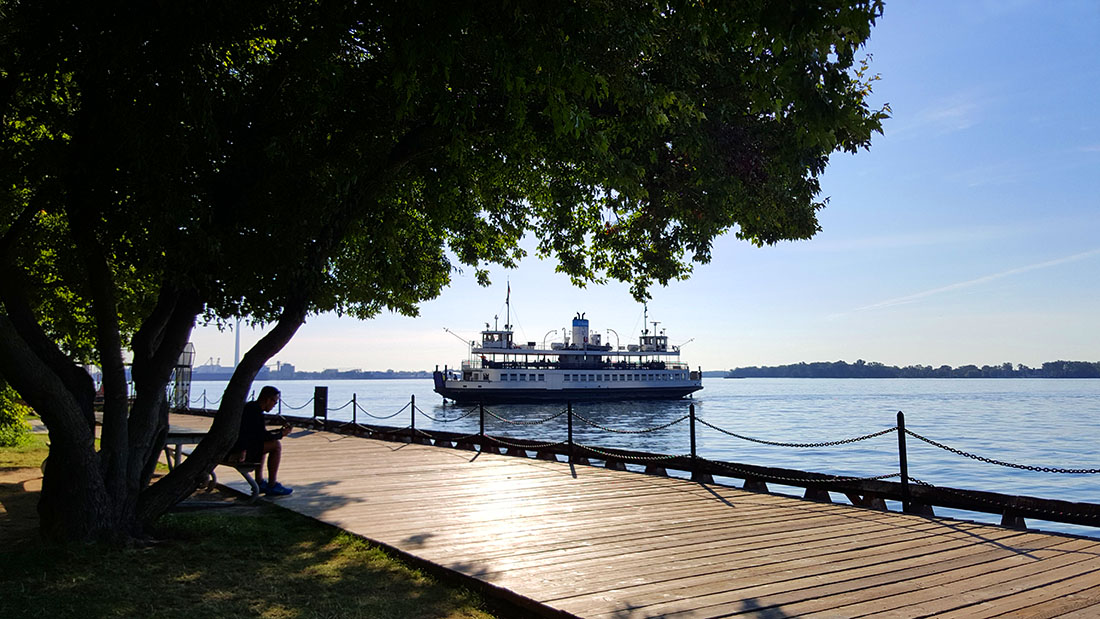 Toronto Islands are an amazing park across the harbour from downtown Toronto; the best photo op of the Toronto Skyline in my humble opinion. To get to them you take a ferry from the base of York Street. The ferries go to Centre Island, Wards Island and Hanlan’s Point. The latter is famous for its nude beach. We shopped for picnic goodies at St Lawrence Market before walking down to the docks, about a 25 minute walk. Bike rentals are on Centre Island. We got our own, but you can rent tandem or even four person tandems. If you don’t want to do the picnic thing, try the licensed Rectory Cafe on the south side of Ward’s Island. The ferry ticket is about $8 per adult round trip. Student and child fares are cheaper. 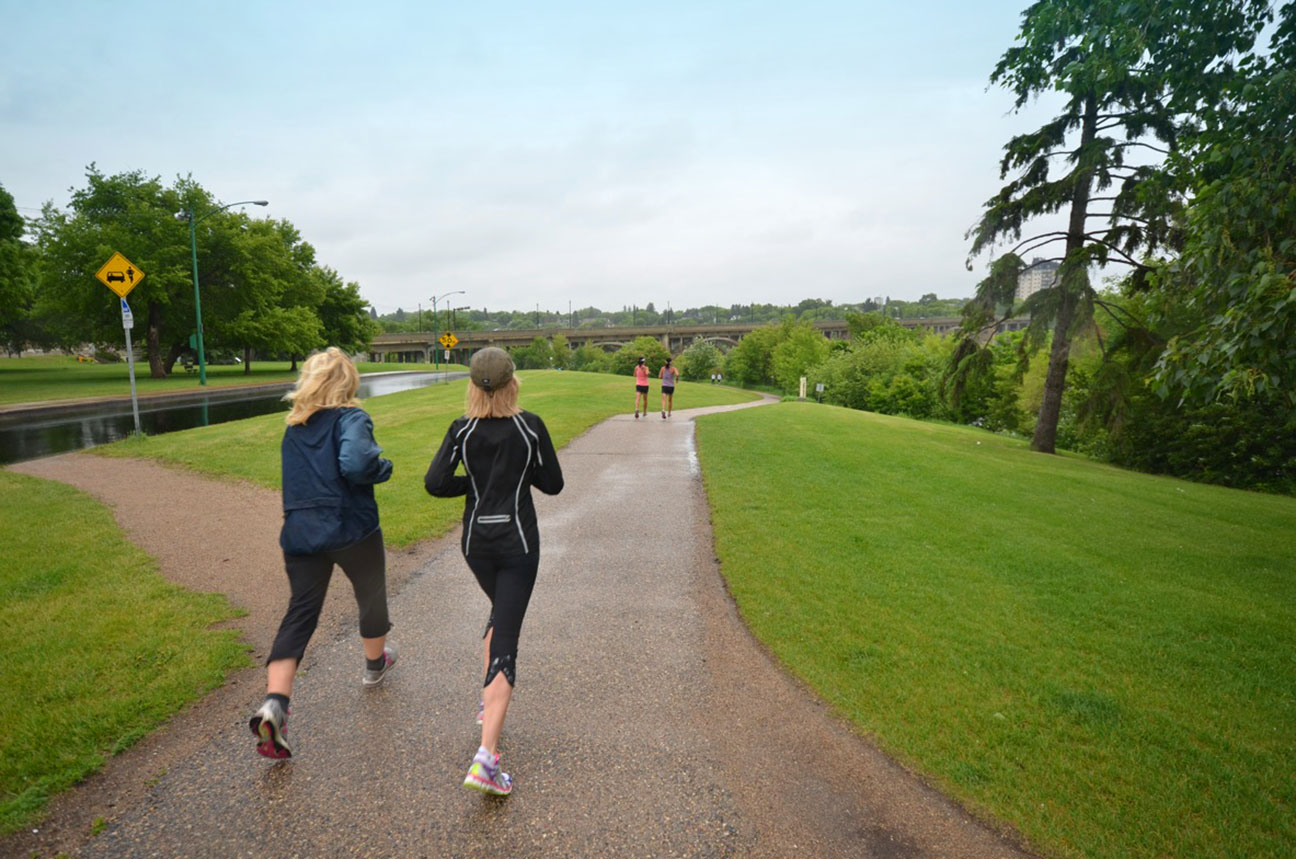 Saskatoon, Saskatchewan has good mountain bike trails. It also has a linear trail called Meewasin Valley. Sunny Saskatoon was rainy so we had the trail pretty much to ourselves. We walked from the Bessborough Hotel to the Saskatoon Farmers Market. The market isn’t right on the trail but it’s close and what a great market. Filled with local food finds including Sea Buckthorns. I had never heard of these orange, tangy-tasting berries. They’re delicious. 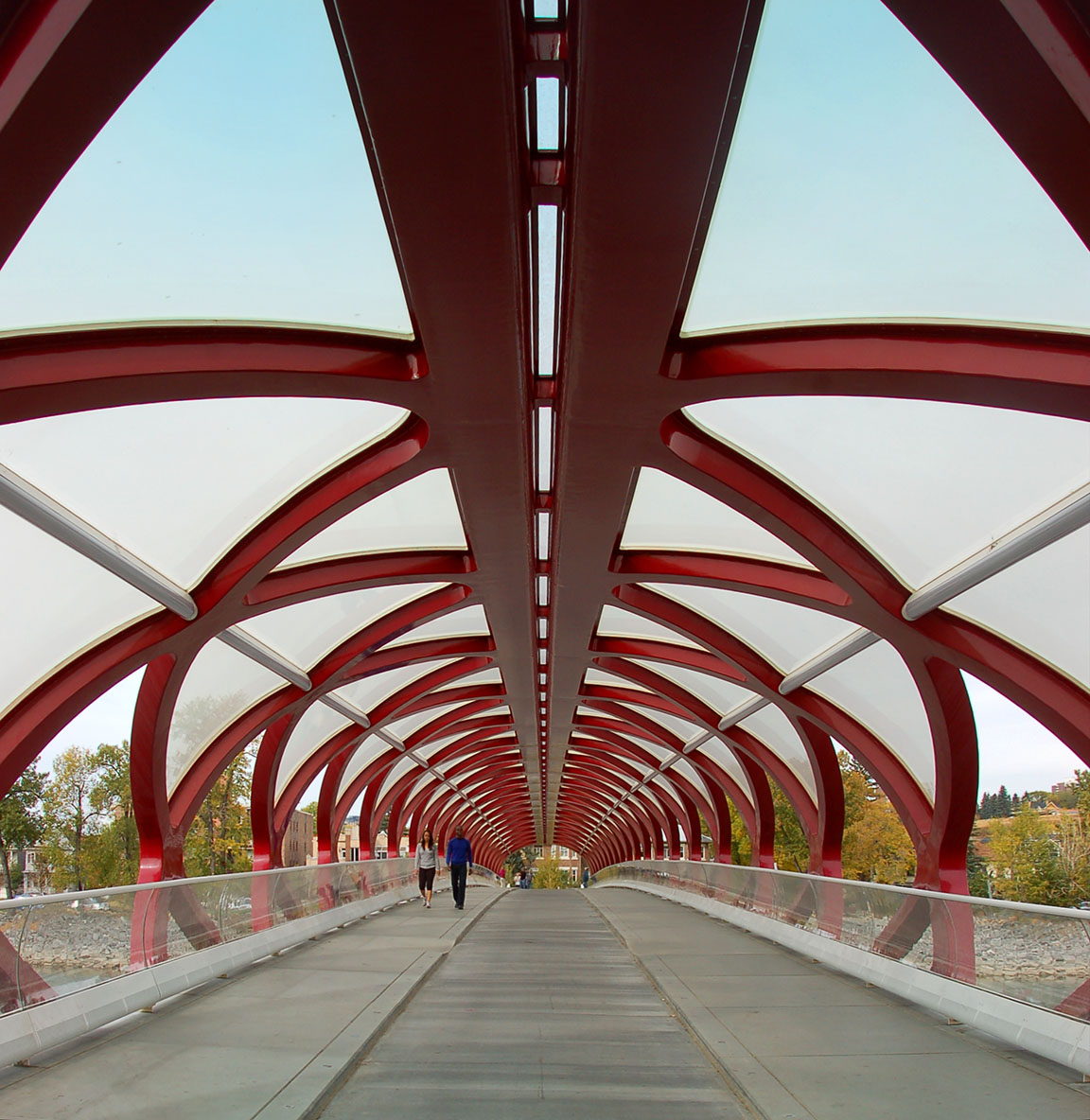 Calgary’s Peace Bridge was designed by Spanish architect Santiago Calatrava. It accommodates both pedestrians and cyclists crossing the Bow River in Calgary, Alberta, Canada. The bridge opened on March 24, 2012.
. . . . . . .

Calgarians bike this trail to work. We began our ride mid-morning after ‘rush hour’. Downtown Calgary’s Eau Claire Market has bike rentals and the staff are helpful. There are paved paths on both sides of the Bow so we biked up one side of the river and down the other. I love Calgary’s new Peace Bridge which was added in 2012. Designed by Spanish architect Santiago Calatrava, the pedestrian bridge is a great addition to the city. Lunch was a splurge: we went whole-hog and ordered a fancy picnic basket from the River Cafe.

Vancouver’s Stanley Park is about as good as it gets when it comes to city parks. It was a midweek spring day when we walked its trails. A perfect time. Less crowds to enjoy its beaches, old growth forests, and mountain views. You can bike Stanley too, on a dedicated trail known as The Seawall Seawall Bike rentals are available just outside the park’s main gate. 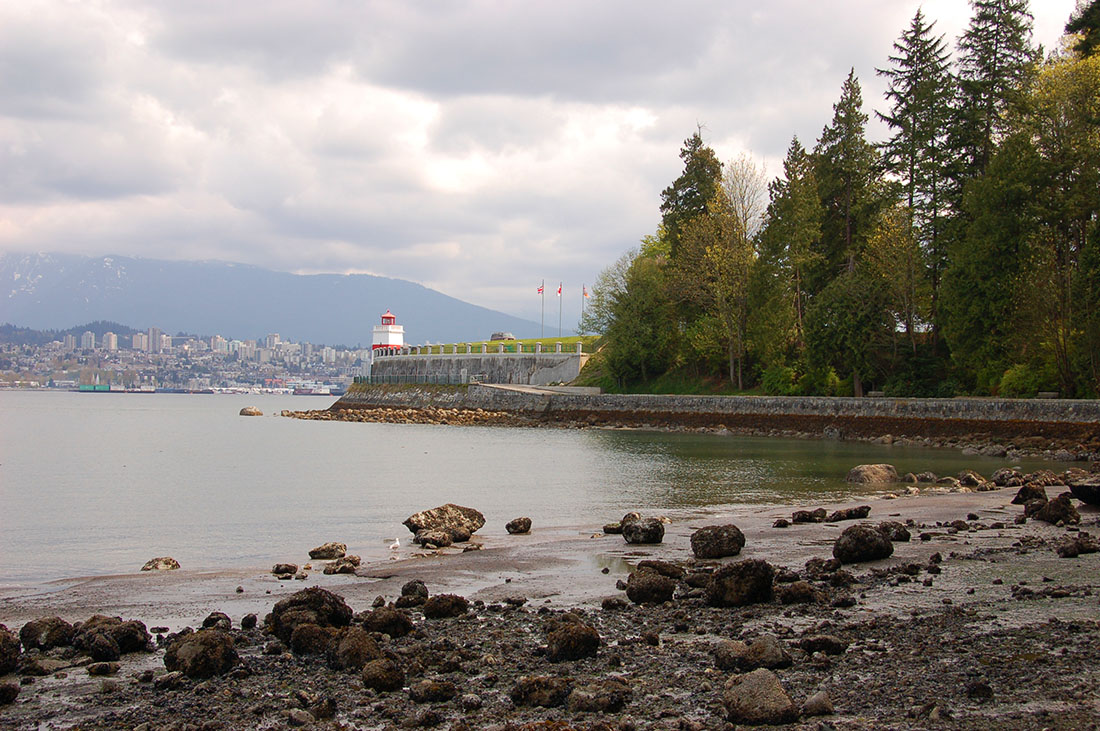