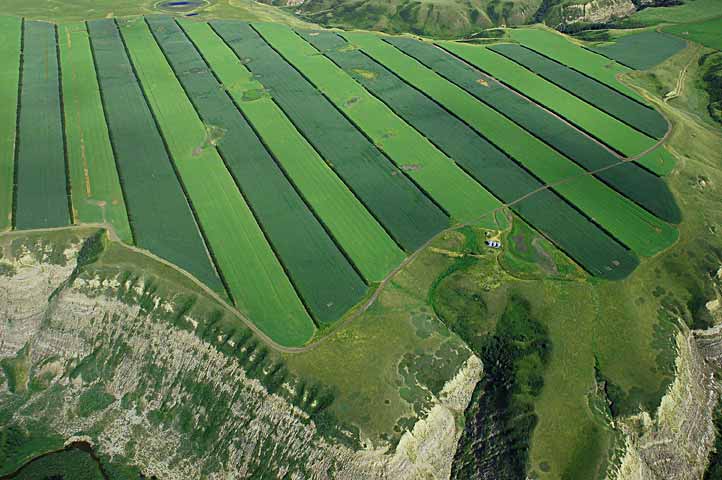 This canyon is part of the Red Deer River Valley. Glenn snapped these graphically stunning photos from the air. Note the dark green borders. These are shelter trees that protect the crop fields from high winds. Horseshoe Canyon is about 17 km west of Drumheller (pop. 8000). It has been made famous by its Royal Tyrrell Museum, the largest in the world devoted to palaeontology (dinosaurs). It’s fantastic. Kids go absolutely ga-ga in the place. Another great dino destination in the Badlands is Dinosaur Provincial Park, about an hour and half drive southeast of Drumheller, near Brooks. I’ll talk more about both of these places in future blogs.

Driving in the Canadian Badlands is different. For starters, there’s no traffic. I hate driving in Toronto, it’s so car-clogged, but in the Badlands, driving is a blast. Even 45 degree turns on the highways have dotted lines for passing because you can see for miles! Restaurants and gas stations are few and far between though, so we learned quickly to top off our gas tank and carry lots of water. 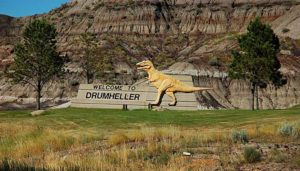 The prairie out here changes. Sometimes it’s as flat as a pancake. Sometimes it’s rolling hills. On the flat parts, it’s startling to have the earth suddenly open up in front of your car as you descend into one of the Badlands’ river valleys. My first impression – the hills – they look like giant beehives. Very outer space-ish. A prairie dog was the first to greet us at Horseshoe Canyon. Western farmers apparently hate these little critters but I think they’re kinda cute. The canyon is also home to lots of antelope and white tailed deer. You can access the canyon floor by footpath but don’t try it if it rains, the earth here turns to mud pretty quickly and climbing back up in a storm would be a challenge. Horseshoe is not the only canyon near Drumheller. There is another called Horsethief Canyon. In the early ranching days, thousands of horses roamed this part of the Canadian prairie. Legend has it that many horses disappeared into these canyons only to later emerge with a different brand seared into their backsides. 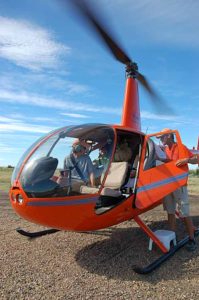 ‘Copter rides operate from June until Labour Day at Horseshoe. If you stop here, be sure to check out Fossil Steve’s booth. Steve grew up in this area and began collecting dinosaur fossils when he was a kid. Besides being a wealth of information on the area and on dinosaurs, Steve sells fossils and lots of casts. I bought a beautiful 65 million year old ammonite from him for $30. Steve told me he found it several years ago before the Alberta Historical Resources Act came into law. It prohibits fossil hunters from going into the region and raiding sites for the purposes of fossil sales. You can view a copy of the Historical Resources Act.

Check out Mountain View Helicopters and more about the canyon.

Next
Atlas Coal Mine