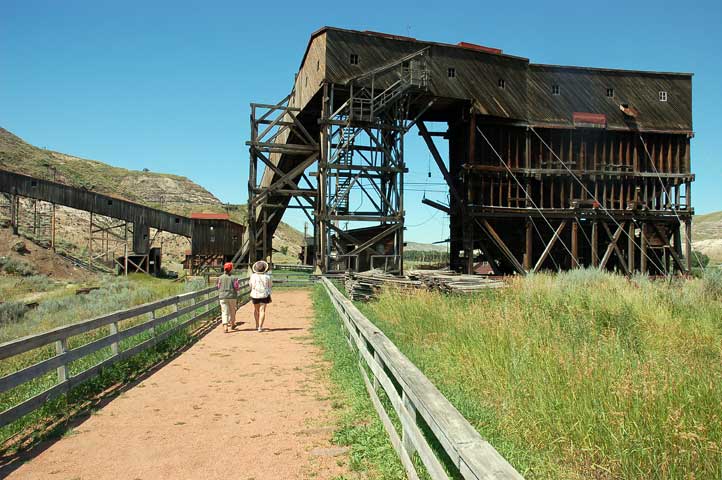 It’s managed by an amazing storyteller. In the space of an hour or so, she brought to life a wild and woolley era of Canadian history. One hundred and thirty nine coal mines once operated in the Drumheller area of the Canadian Badlands. Coal was what oil is today and Drumheller was the Fort McMurray of the 1920s.

The place was BOOMING. Every language of Europe could be heard on the streets back then – Polish, Ukranian, Italian, German and more. Each mine had its own language too, with Polish spoken in one, Ukrainian in another and so on. Labour strife and the communist movement was strong and according to Linda a lot of in-fighting went on. Conservative mining companies faced off against labour groups and miners fought other miners. Fist fights broke out constantly. The wild west mentality was alive and well. One bar owner got so fed up with all the barroom brawls that he eventually drew a line down the middle of his establishment and told his competing customers to stay on their respective sides.

During Prohibition, secret tunnels and escape routes were built all over Drumheller. Bars occupied every street corner. Weekly paycheques were cashed at the bars and hotels or at brothels like Fanny’s, Mary’s and Pretty Alice’s. The brothels are long gone but some of the bars and hotels still operate. Places like the LongBranch Saloon in Drumheller and the Rosedeer Hotel in Wayne, a ghost town. (http://www.coalking.ca/people/ghost_wayne.html) Built in 1913, the Rosedeer Hotel was nicknamed “Bucket of Blood” in the coal mining era. Apparently some real brass knuckle stuff went on in its rooms upstairs. It’s all very genteel now and a great spot to stop for a beer and some Alberta beef. Drumheller’s tunnels are still around too but you won’t find them in the tourism guides.

If you’re in the Canadian Badlands around Hallowe’en, check out Haunted Atlas Coal Mine. It’s got to rank as one of the best Halloween events in Canada. The mine’s grey-timbered tipple, the only left in North America is creepy enough in daylight let alone at night. Hallowe’en is when you get to explore it on your own, armed with only a flashlight. 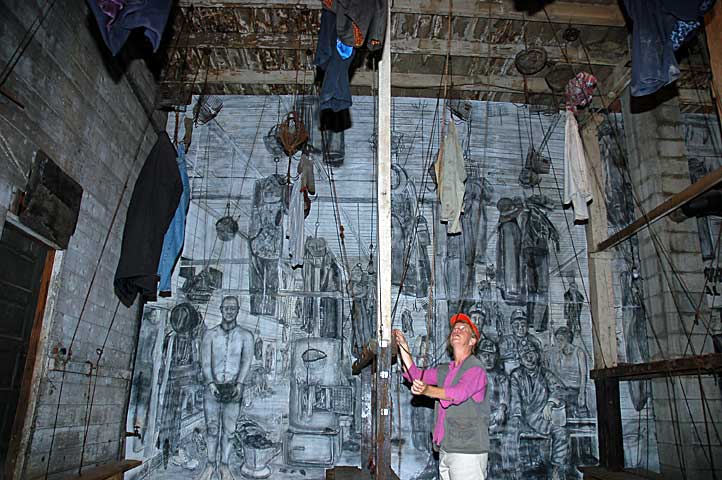 Bath House at the Atlas Coal Mine

The mine’s former bathhouse is just as creepy. Big meat hooks attached to ropes on pulleys hang from the bathhouse ceiling. Coal miners once used these to hang their street clothes on, high above the coal dust.

Check out the Google Map here. and also the Atlas Coal Mine website.