Into the Wild: A Signature Scientific Experience at the Churchill Northern Studies Centre
……. 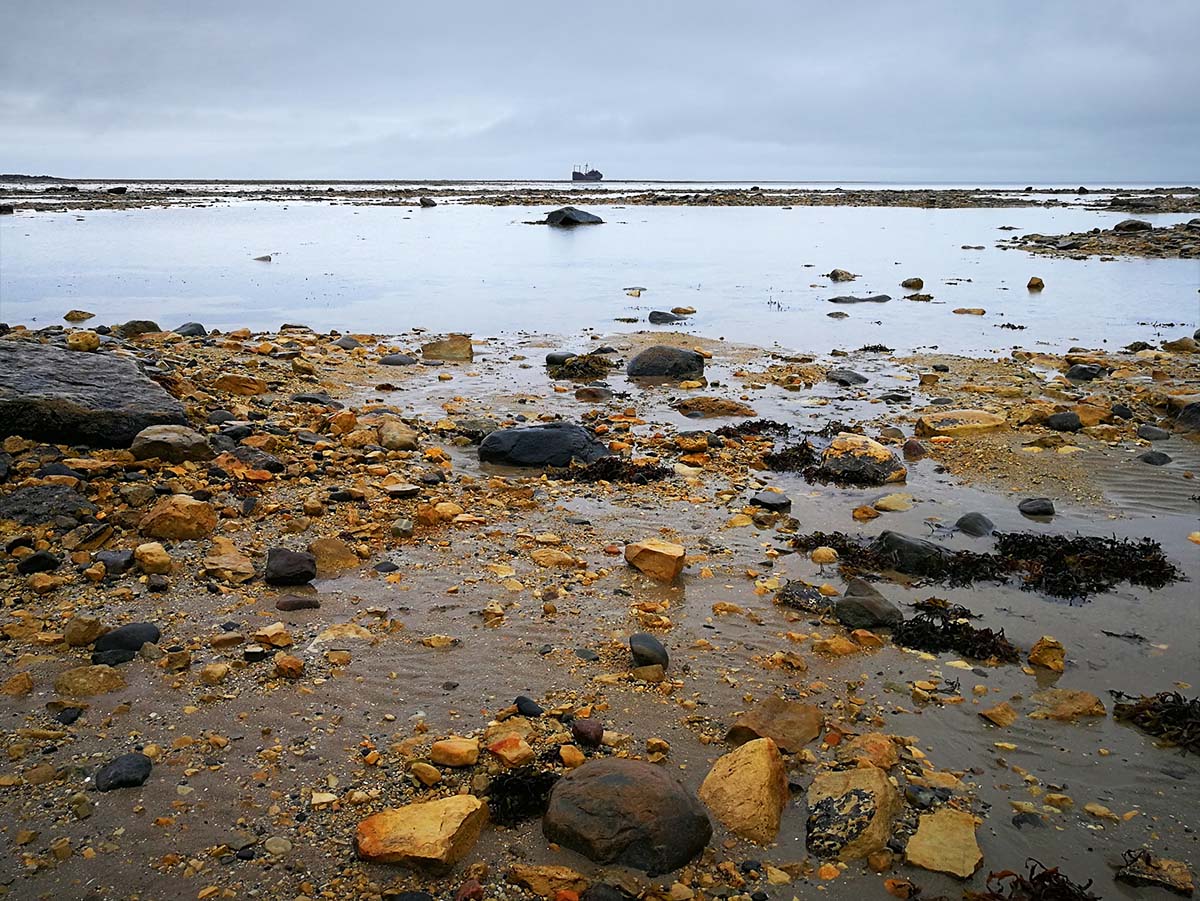 The pull of the north is mysterious to those who visit from the south. It’s led more than a few intrepid explorers into a frozen eternity, trapped in snow and ice or lost to dark, frigid waters. For 21st century explorers, curious and keen to learn about the people, places and unique animals of the sub-Arctic and Arctic regions of Canada, there is no better place to venture and spend time, at minimal peril, than the Churchill Northern Studies Centre (CNSC) in Churchill, Manitoba.

“When one tugs at a single thing in nature he finds it attached to the rest of the world.” – John Muir

I certainly count myself as a curious explorer. When I signed on to the five-day Wild Planet course at the CNSC, I couldn’t wait to begin my discovery of the sub-arctic tundra, boreal forest, and viewing the area’s stunning animal life, including kayaking alongside breeding beluga whales. As our Calm Air plane descended into Churchill on a clear day in mid-August, I was ready to leap out into the bush. But not so fast, because safety first. 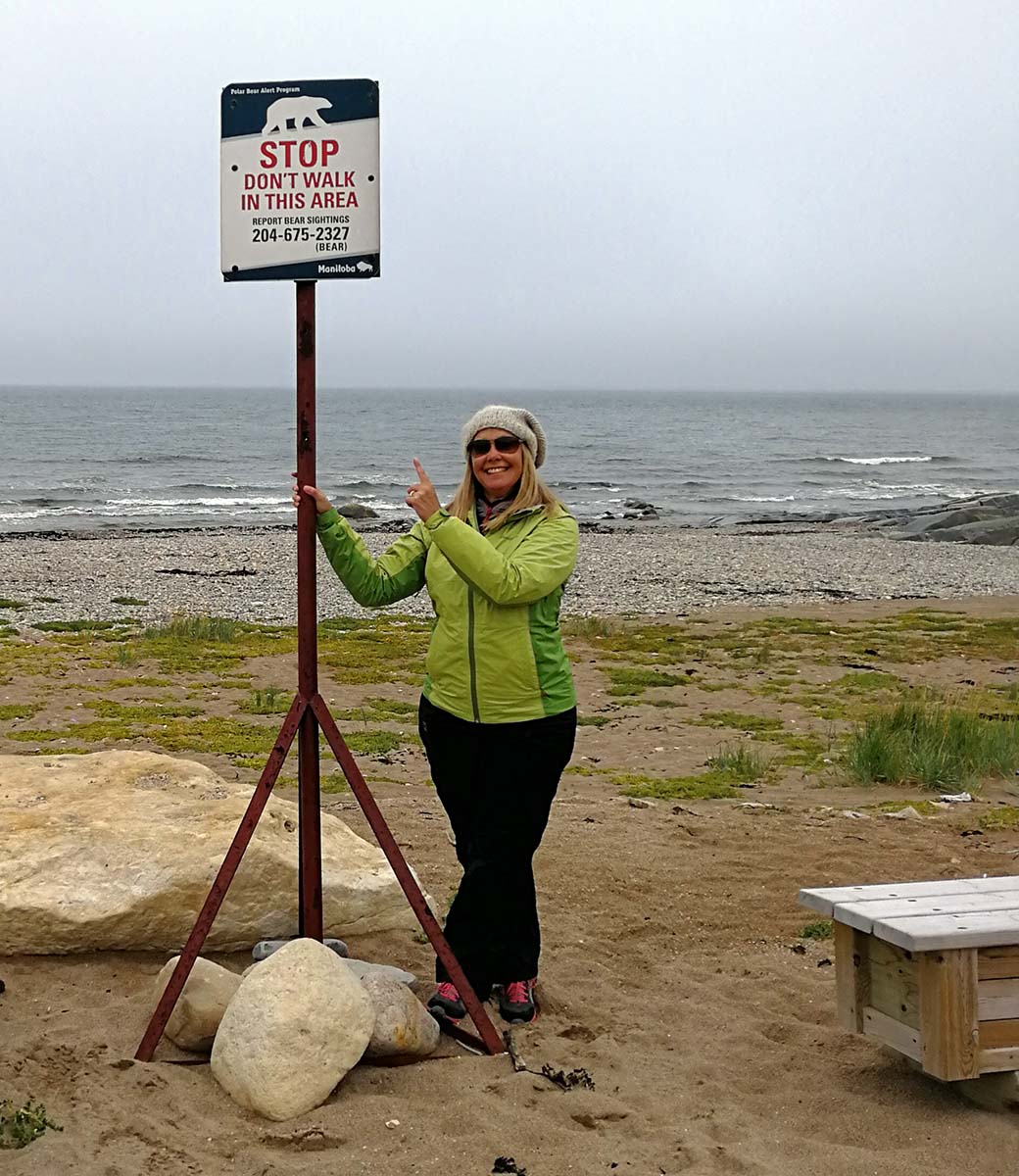 Claudia Laroye learns about safety first on the shores of Hudson Bay – Watch out for Bears
. . . . . . .

The Churchill Northern Studies Centre (CNSC) is an independent, non-profit research and education facility located 23 km (14 miles) east of Churchill, Manitoba. This is where the northern reach of the boreal forest meets the southern extent of arctic tundra, on the shores of the vast Hudson Bay. Founded in 1976, the mission of the CNSC is to understand and sustain the north. Scientists from all over Canada travel here to study arctic animals like belugas, polar bears and foxes, plants like crocus, reindeer lichen, the variety of berries, and the Aurora Borealis, the northern lights.

CNSC offers five to seven day Learning Vacations to intrepid travellers and citizen scientists on a year-round basis. No surprise that the busiest season is bear season which runs from October to November. The Lords of the Arctic camp showcases the polar bears as they congregate in the Churchill area to await the return of the sea ice and access to their chief food source, the ringed seal. The darkness of February is the best time of year for those seeking the magic of the Northern Lights, though you can see them year-round if conditions are right.

I was visiting in late summer for the Wild Planet experience. This course showcases the sub-arctic tundra and boreal forest through daily hikes, as well as the region’s stunning animal life, including breeding beluga whales and polar bears. It also includes daily lectures from visiting scientists and academics that study everything from the tiniest plant to the night skies above. 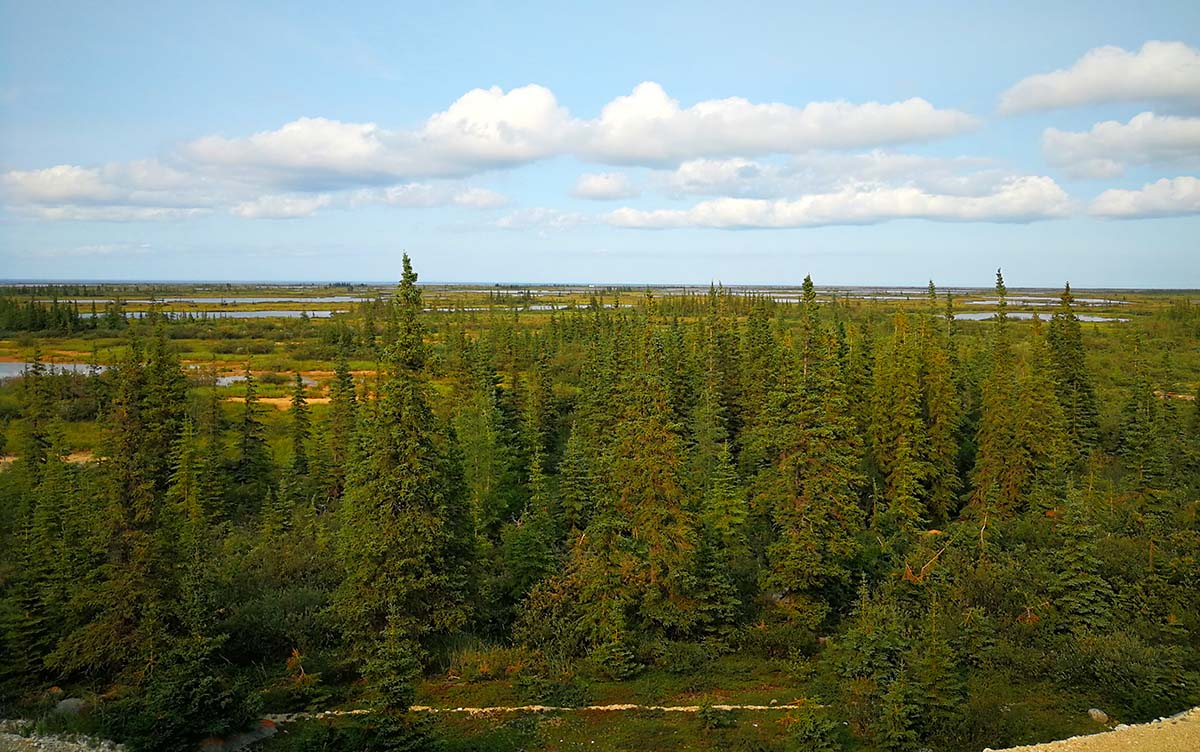 The Centre can accommodate 84 guests in comfortable, dormitory-style shared accommodation. Meals are included in the stay, and the quality of the food is the surprising secret bonus of the Centre. (Note: there’s even a commercial-grade greenhouse growing and selling fresh “Rocket Greens” to locals.) My group of fellow northern enthusiasts was keen to embrace a learning holiday as part of their individual desire to learn more about Canada, and discover the natural world in the north.

So, back to safety first. As part of every CNSC course orientation, it’s necessary to attend a briefing that includes tips on how to stay safe in polar bear country. Things like not venturing out on one’s own – ever – without an armed bear monitor. Post-dinner walks were definitely out. While our lead guide James had never had to fire his powerful 22-gauge shotgun, we did hear cracker shells (fired to frighten a roaming bear) on one memorable occasion. A 29-year old female bear was being pursued through downtown Churchill. It was darted from a helicopter in the grassy flats just outside town, then transported to spend thirty days in the Polar Bear Holding Facility. 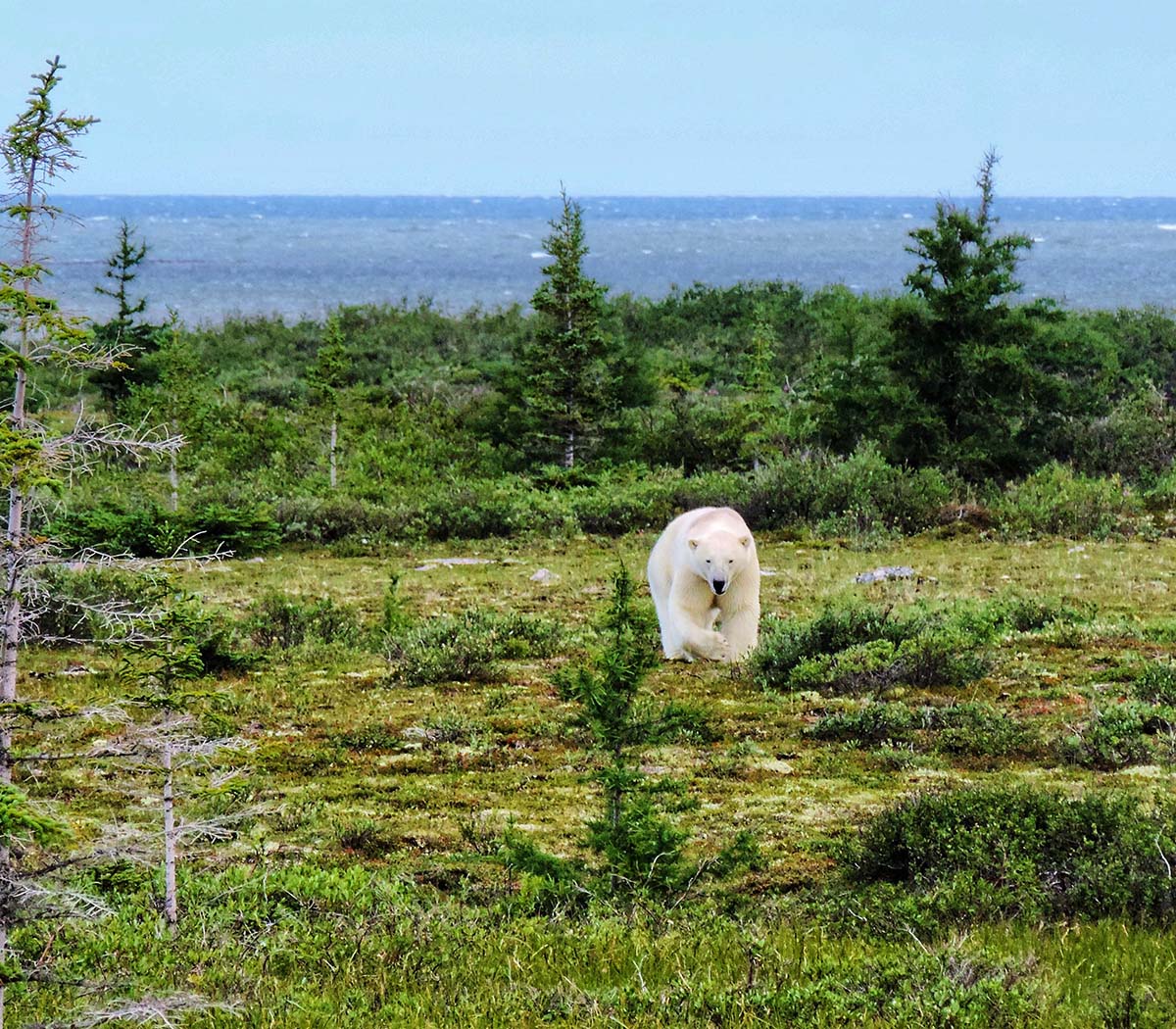 Polar Bears are common around Hudson Bay and the Churchill Northern Studies Centre – photo courtesy of the CNSC.
. . . . . . .

No one took issue with the safety first policy. Whenever we went out on our daily hikes, foraged on the Hudson Bay beach, or even near the CNSC buildings, our guides were armed. The entire Churchill community embraces the safety first mentality.

Car doors and homes are always left unlocked so that in cases of polar bear alert, people can duck into the nearest shelter or home.

Each camp day was spent experiencing different aspects of life in and around Churchill. We covered up against mosquitoes for a walk on spongy muskeg near Ramsey Lake, busy with birds of prey such as bald eagles, as well as parasitic jaegers, Pacific Loons and a flock of white tundra swans. The soft muskeg along the trail made for an easy hike. The springy surface sits upon permafrost in this sub-arctic zone. However, as with so many climate changes, the nature of permafrost is changing as well. 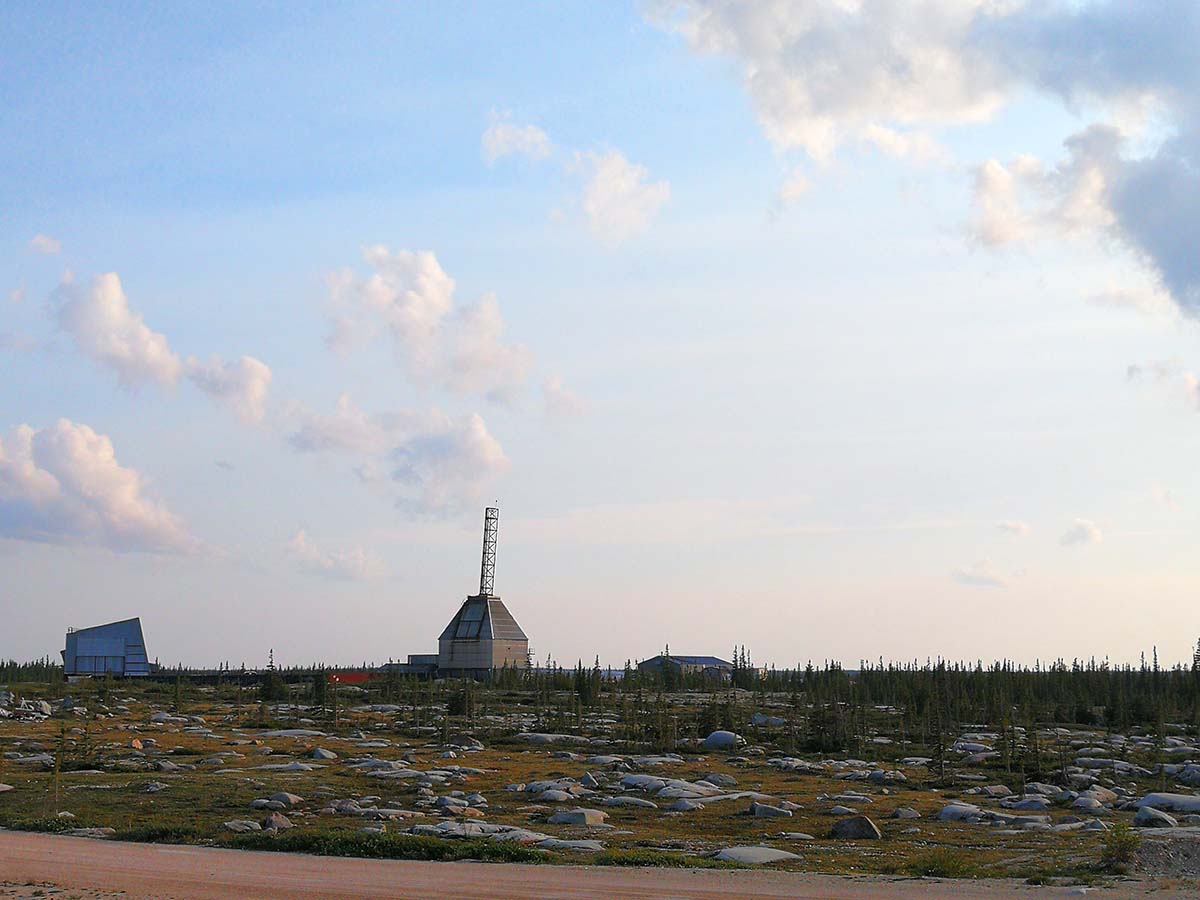 The Churchill Rocket Research Range is a former rocket launch site used by Canada and the United States beginning in 1954 to study the upper atmosphere. Over 3,500 sub-orbital flights were launched. The Churchill Northern Studies Centre was constructed on part of the rocket range property.
. . . . . . .

On our Twin Lakes hike, we stopped to pick small wild blueberries that grew everywhere along the trail. They were a better find than the more bitter-tasting black crowberries. The variety of lichen in the boreal forest was incredible, ranging from light-coloured reindeer lichen to the bright orange starburst variety, and the edible but none-too-tasty rock tripe lichen.

The European history of Churchill is tied to the Hudson’s Bay Company. Its exploration of the area on behalf of England began in the 17th century. Sloop Cove was the small port on the Churchill River where HBC men would tie their ships. We could still see their graffiti markings etched into the soft granite stone. As we traced the Company’s footsteps from the Cove to Prince of Wales Fort, we stopped to note wolf tracks and kept an eye out for large white mammals. The Fort took forty years to build, and was never quite finished before the French partially destroyed it in 1782. It’s now a Parks Canada site, and sits at the mouth of the Churchill River. 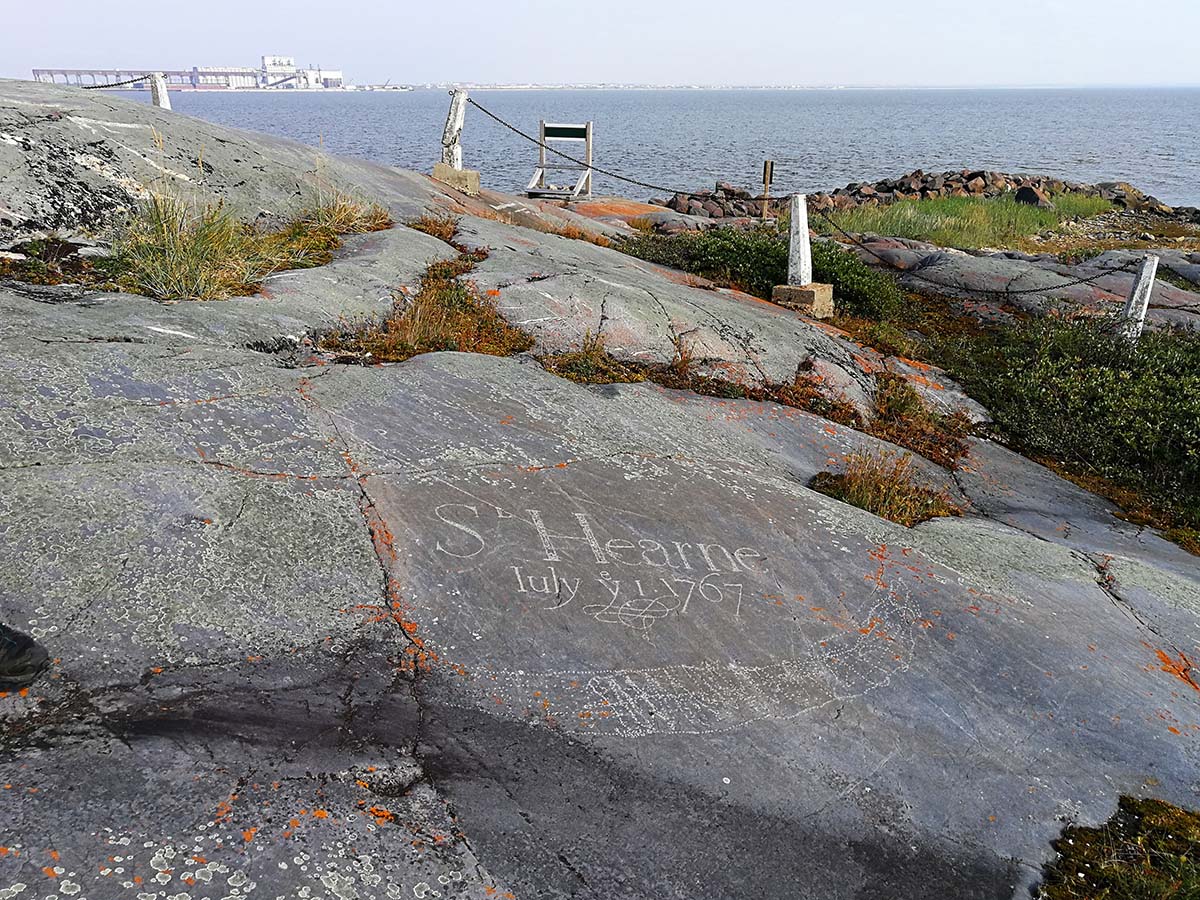 Markings on the stone around Sloop Cove. The Port of Churchill superstructure can be seen in the background.
. . . . . . .

Though August isn’t known as prime time for aurora spotting, if conditions permit, one can get lucky. I set my alarm clock for 12:30 AM on an auspicious evening, got up and climbed the spiral staircase of the Centre’s Aurora Dome for a 360 degree view of the night sky. I spotted some strange cloud formations at that early hour, and headed outside on the upper viewing deck in time to view the green light begin to shimmer and dance shape above my head. I will attest to the fact that such a magical light show is well worth a night’s sleep interruption. 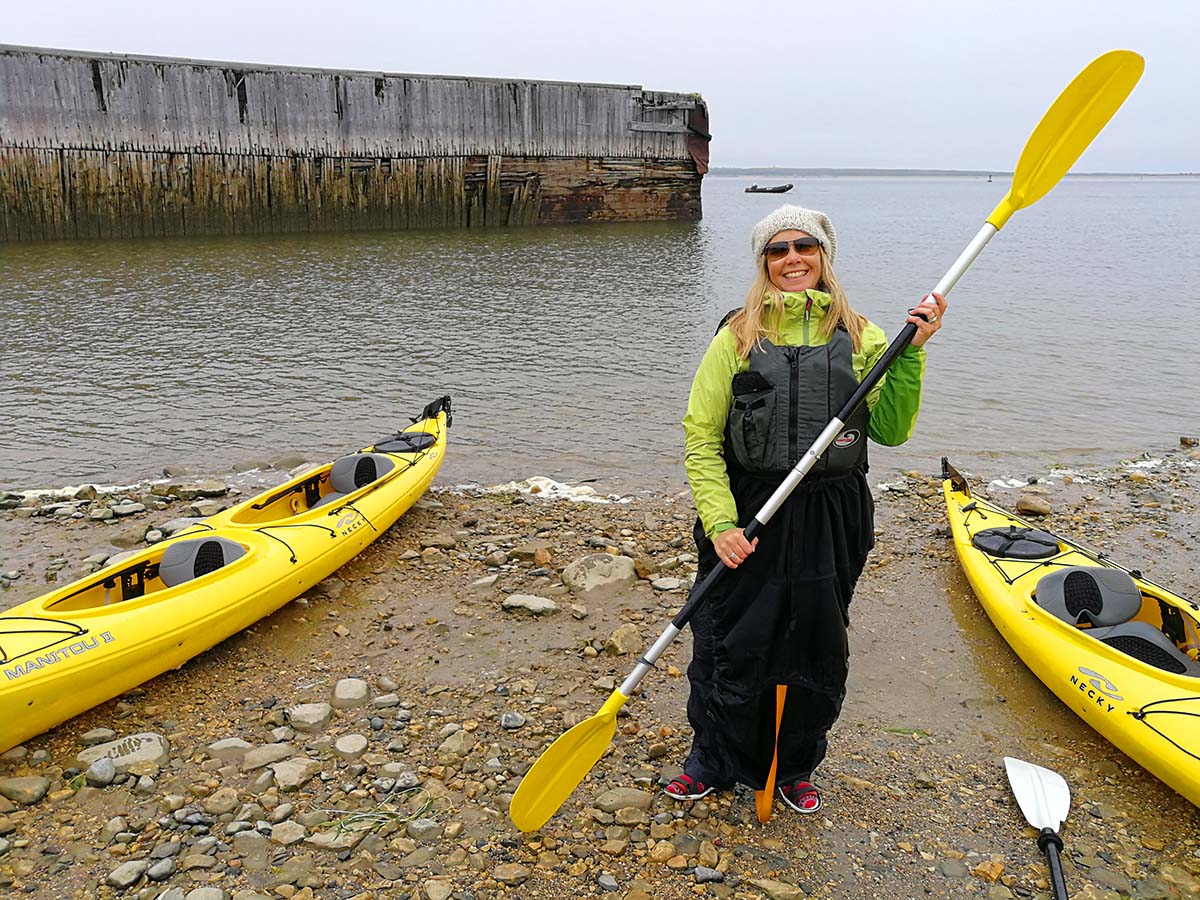 As magical as the northern lights, history and hiking through muskeg can be, it pales next to the opportunity to kayak alongside breeding beluga whales. Thousands of belugas and their calves congregate at the mouth of the Churchill River, growing big on kapelin before heading north to the Arctic and Lancaster Sound for winter. The white backs of adults, and grey forms of baby belugas, are easy to spot from shore. On the water, they surround you. On a cool grey morning, we paddled out past the abandoned Churchill Port in our Sea North kayaks to enjoy a playful encounter with these gentle sea creatures. 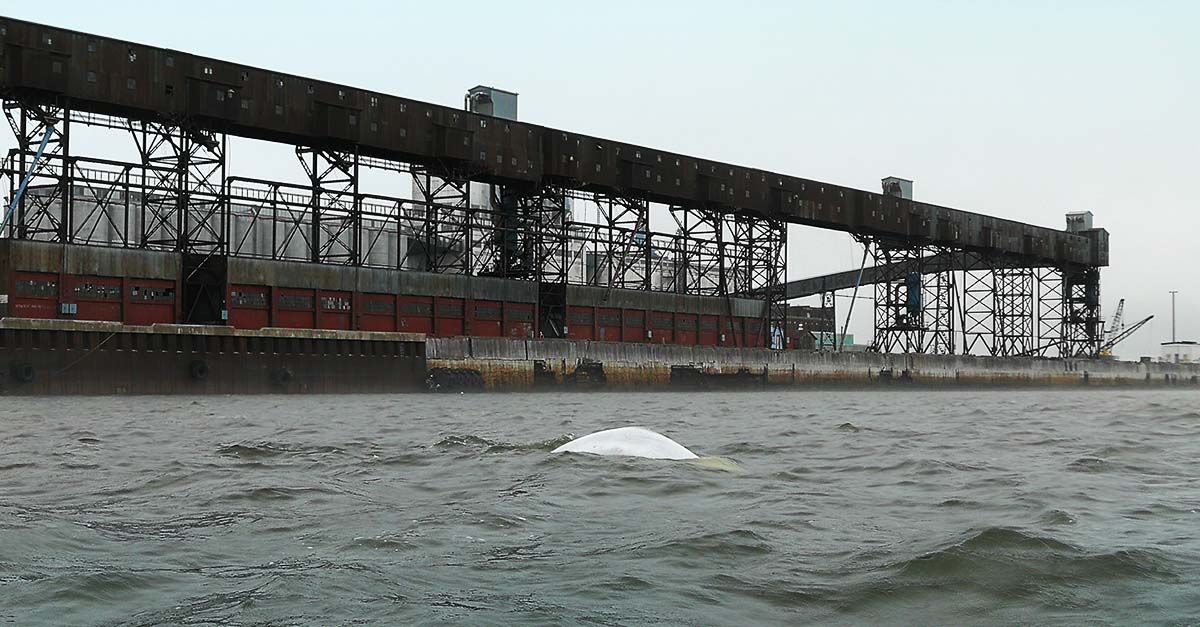 Belugas frolic in the Churchill River in front of idle Port of Churchill equipment.
. . . . . . .

Belugas were very active in the surprisingly warm river, and loved the bubbles created by my kayak paddles. The feeling that comes when a beluga swims within one foot of you, or bumps your kayak from underneath is incredible. The sounds of breathing whales, clicking cameras and delighted laughter echoed off the shore. It’s not every day you’re surrounded by such wild beauty in its natural habitat, and it is rare and humbling. We are all connected to the natural world, though humans tend to forget this at times. 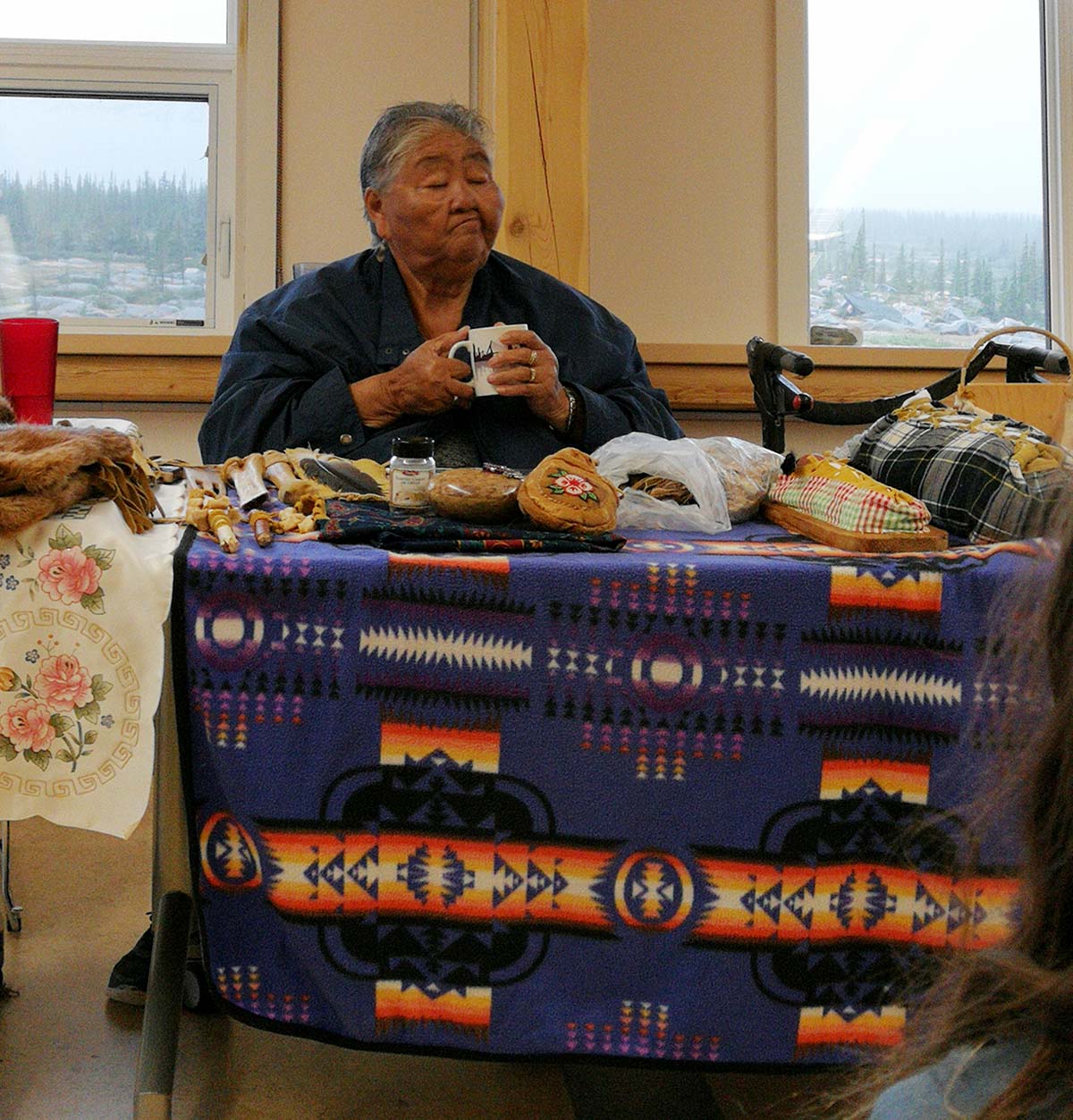 The sharing of knowledge at the Centre didn’t end with the natural world. We took in lessons on human history, and the darker chapter of First Nations relocation in northern Manitoba. We were privileged to experience a presentation by local Sayisi Dene Elder, the late Caroline Bjorklund. She told the powerful personal story of the forced relocation of her nomadic people, the Sayisi Dene “People of the East” to Churchill from their nomadic life following the Caribou in the north, in 1956. The relocation had a devastating impact upon the lives and culture of the Sayisi Dene, which has only received a formal apology from the province of Manitoba and the Canadian government in the 21st century. There is much to repair in our relationship with First Nations in Canada. I couldn’t help but think that our understanding would be advanced by the chance to meet and listen to survivors and hear these difficult stories. The impact is profound. 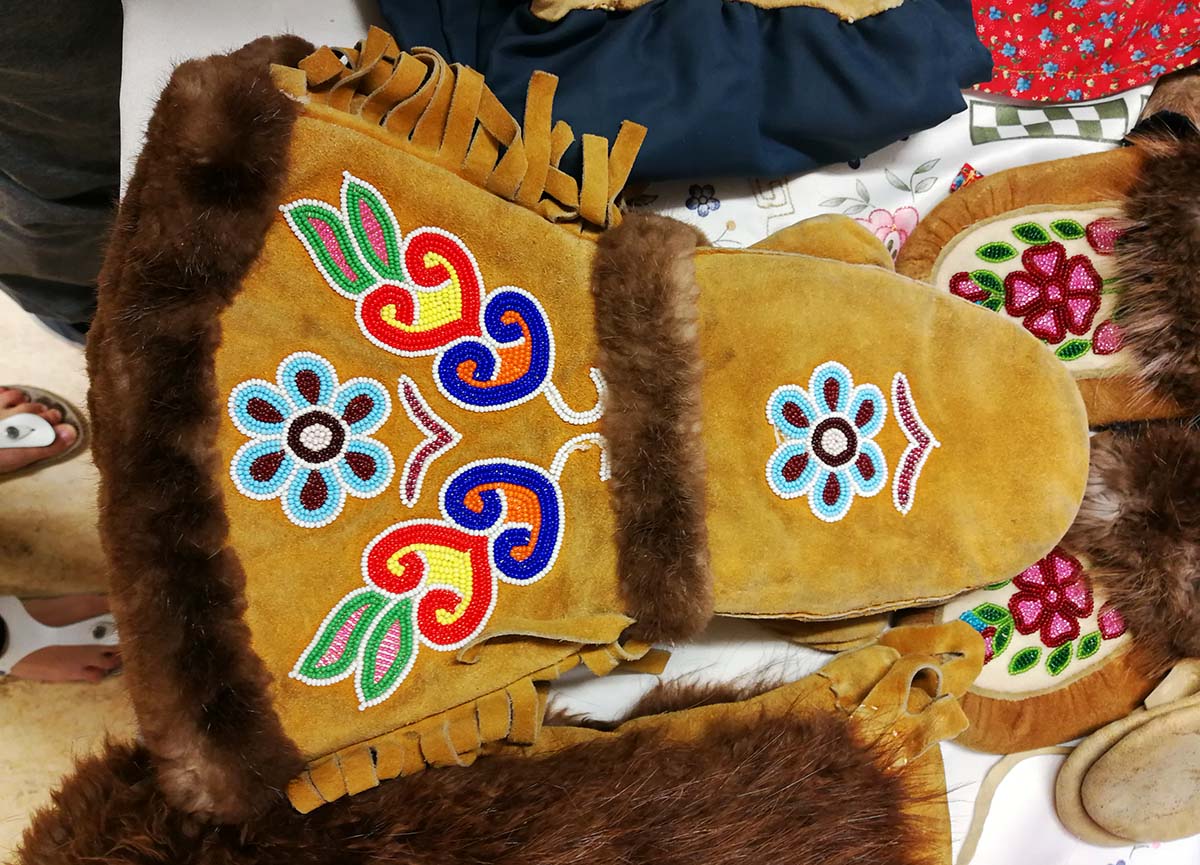 The remoteness of the Centre and Churchill gives it an end-of-the-earth feeling. Though you’re not even above the Arctic Circle, you are most certainly in the north, and the north is an incredibly special place. It may have taken me 40+ years to visit, but now like so many explorers and visitors before me, its landscape, history, and the delicate balance of nature grip me as well. There’s no better way to dive deep into understanding the north then by participating in a signature scientific experience at the Churchill Northern Studies Centre.

If you want to learn more and get lost in pages of adventures, check out these excellent books on the North, its characters, and its First Nations people. 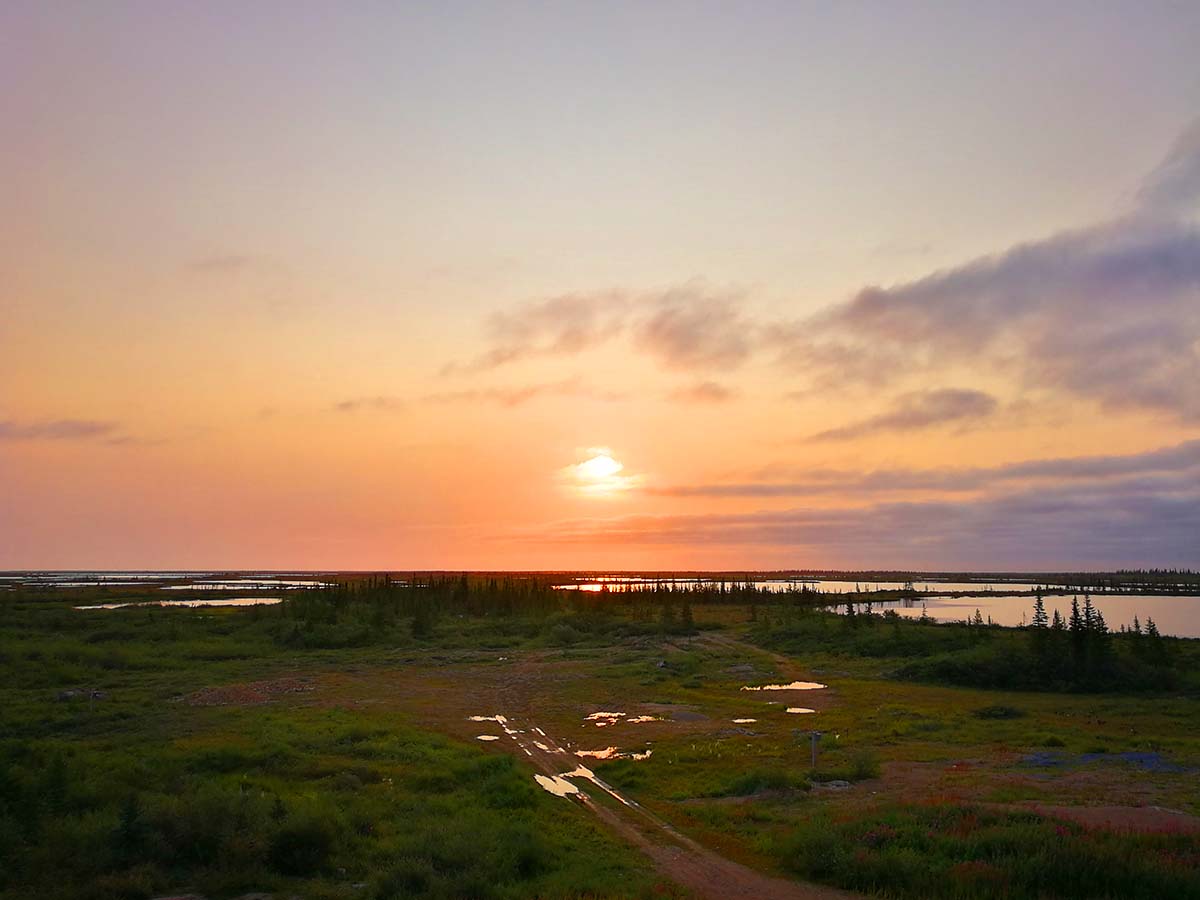