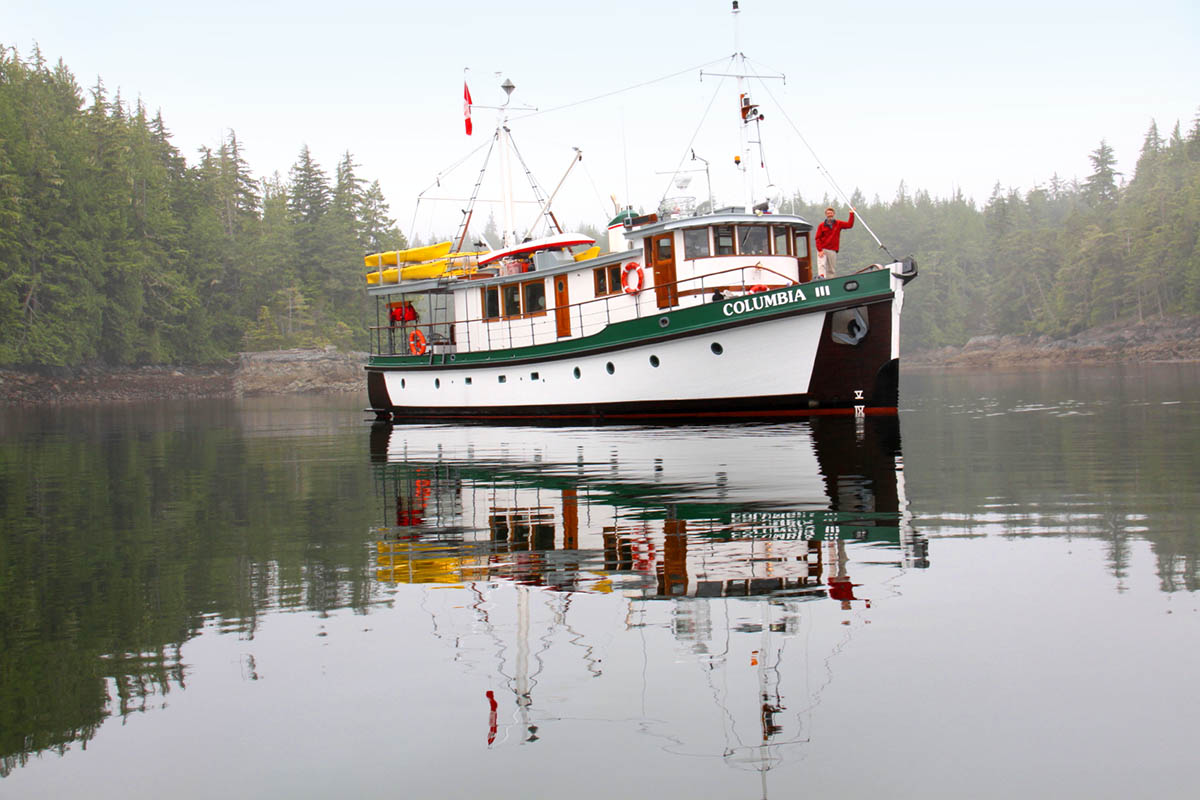 Through the Broughton Archipelago to the northeast of Vancouver Island, British Columbia …
…….

We arrive at Alert Bay on Cormorant Island, once the site of a vibrant village, dominated by large cedar longhouses and tall totem poles. Today, the picture is different. Moss-encrusted piers, several with missing planks, jut into the bay. The tang of salt, seaweed and rotting fish hangs in the air. A few totems punctuate the drab waterfront, reminders that this place, which has been home to the Namgis First Nation for thousands of years, has seen better days.

My wife and I are aboard the Columbia III on a First Nations’ cruise operated by Mothership Adventures that will meander through the Broughton Archipelago to the northeast of Vancouver Island, British Columbia, while we learn about Native history and culture. Lillian Hunt, a Namgis Native and curator of the U’mista Cultural Centre is our guide. 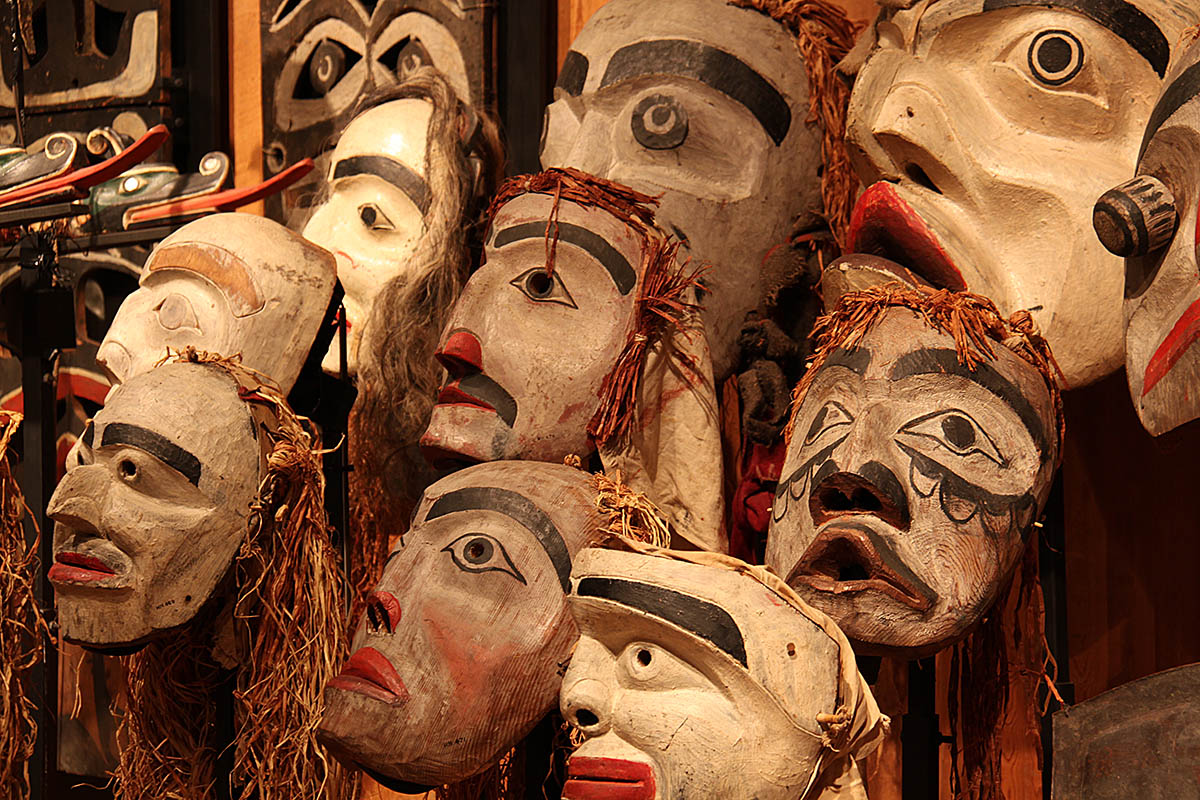 We head ashore to the U’mista Cultural Centre, which captures both the agony and glory of the Kwakwaka’wakw people, a group of 16 First Nations in this region that shared a common language. A film shows how in December 1921 a large potlatch (considered illegal by the white man) on Village Island was raided and the priceless ceremonial regalia confiscated. About 20% of the seized items have been repatriated and are showcased in the Potlatch Collection, which is full of coppers and masks representing ravens, eagles, orcas, bears, the moon and sun as well as supernatural creatures. It’s stunning and I sense a powerful pulse, an emotional celebration embodied in this regalia. 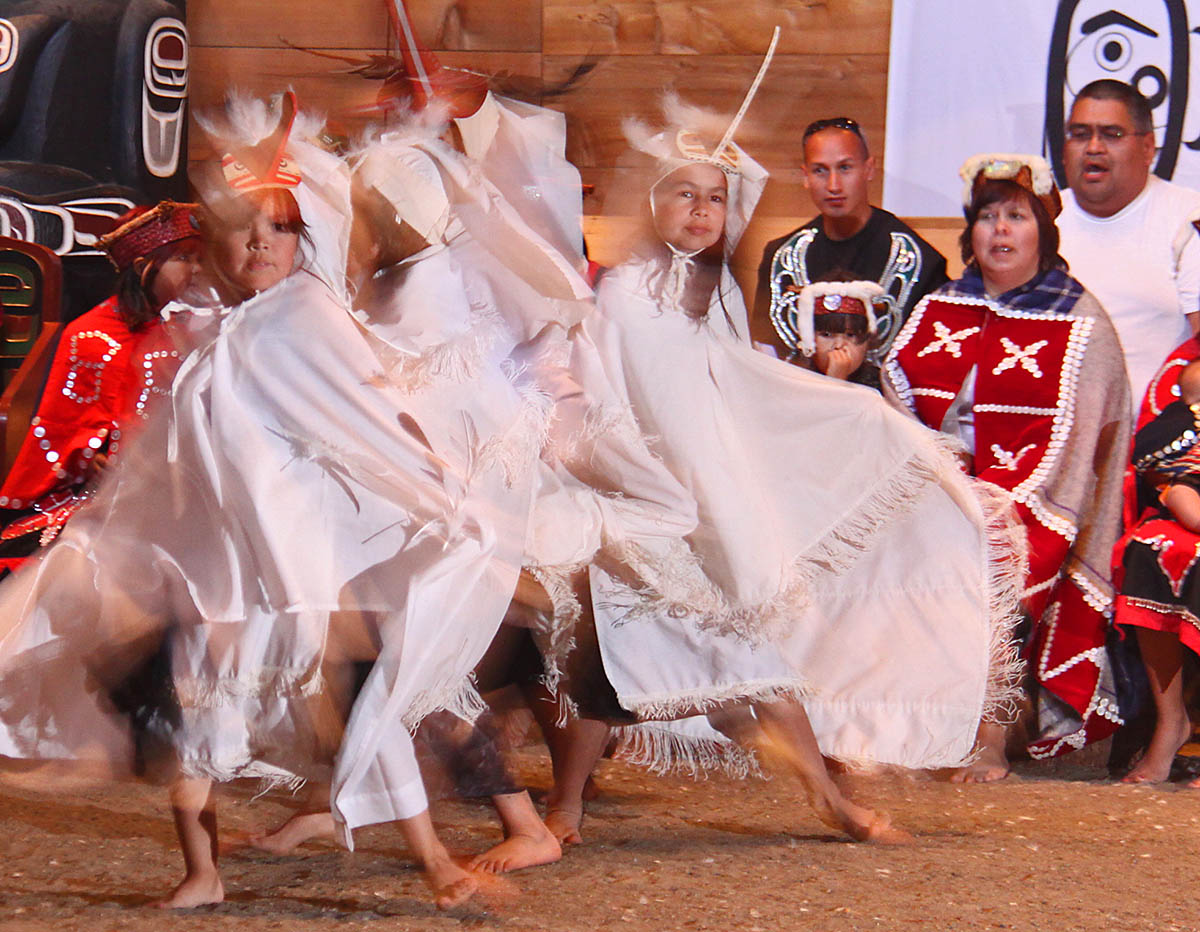 The T’sasala (“Determined”) Dancers, youngsters in Native regalia, circle the fire in the Big House, performing a traditional dance.
. . . . . . .

Then we are called to a Native feast of barbequed salmon, clam fritters, prawns, halibut and a special treat, an oily fish called oolichan. Delicious!

Only yards away from the modern cultural centre, sits the decaying St. Michael’s residential school, a hulking, red-bricked reminder of the persecution of the Native people. (This cruise took place before the school was demolished in 2015.) From 1929 to 1974, children were forcibly taken from their families to live and study at the school in order to ‘civilize’ them. 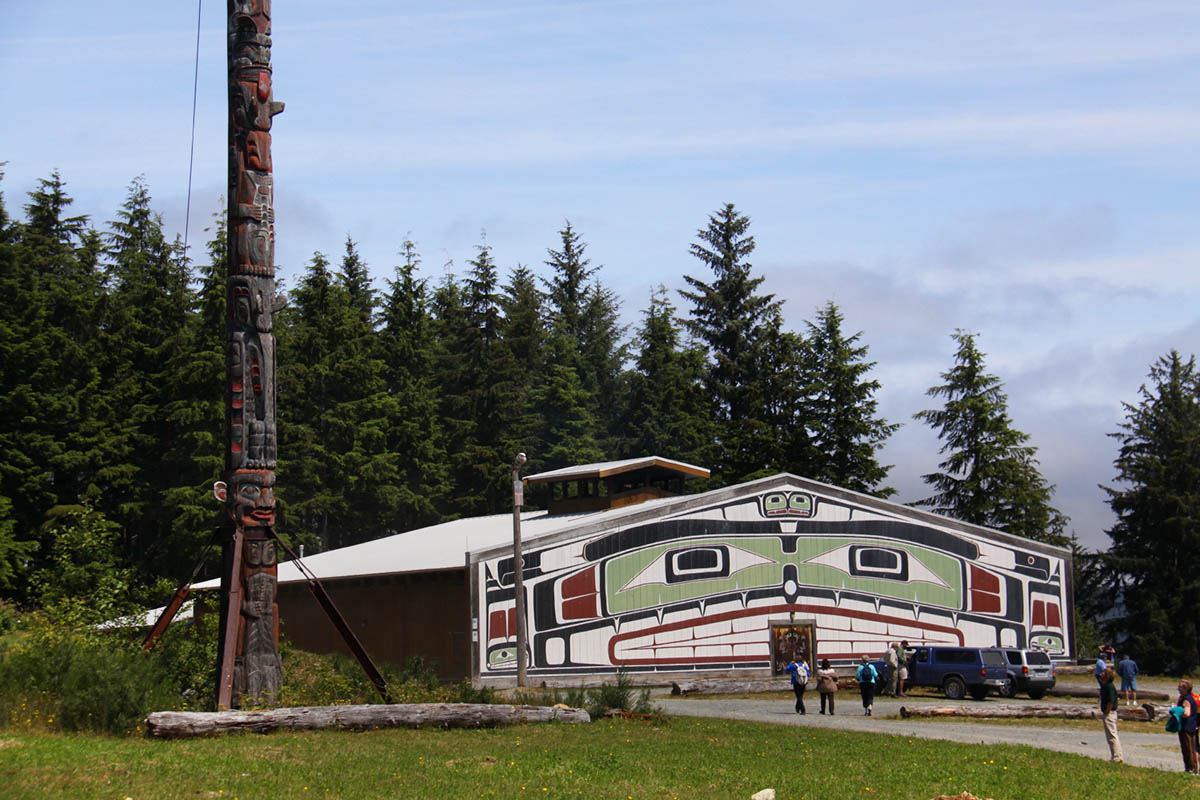 We stroll into town and gaze at the cemetery. I am touched by the array of totems as well as crosses, an intriguing intermingling of Native and non-Native faiths. 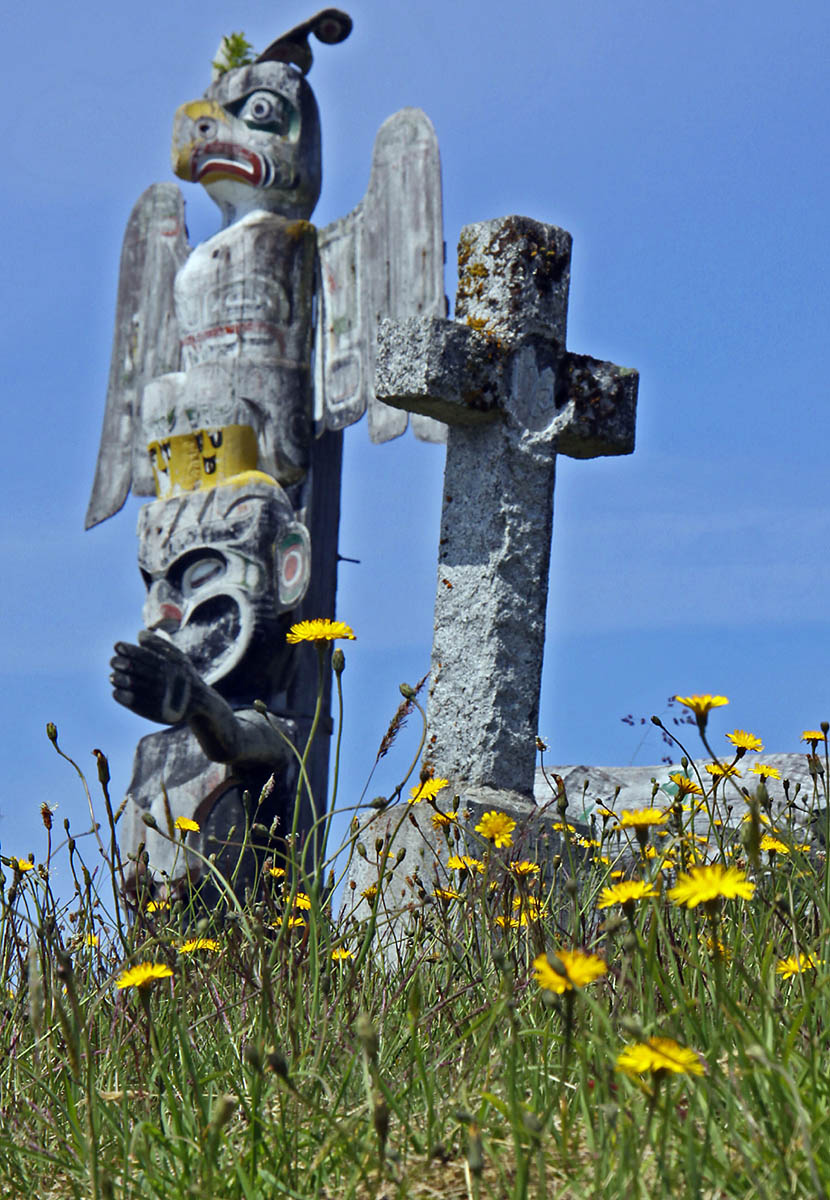 Sailing away, I realize the soul of the First Nations people is laid bare in this town of contrasts. It has living conditions that, in places, resemble a third-world country. But it also displays great beauty and a proud culture. Alert Bay screams out about the injustices that Native people have suffered.

We cruise eastward and anchor on the north side of Hanson Island. Over dinner we chat about First Nations’ dances, thunderbird masks and the taste of oolichan.

In the morning we rise to mist hanging over the islands like silken veils. The rising sun chases the fog and the Columbia purrs through the archipelago.

Lillian points to a mortuary box peeking out of the greenery on Berry Island. Not allowed to go ashore, we study the box with binoculars wondering what high-ranking person lies inside and how he or she lived and died. 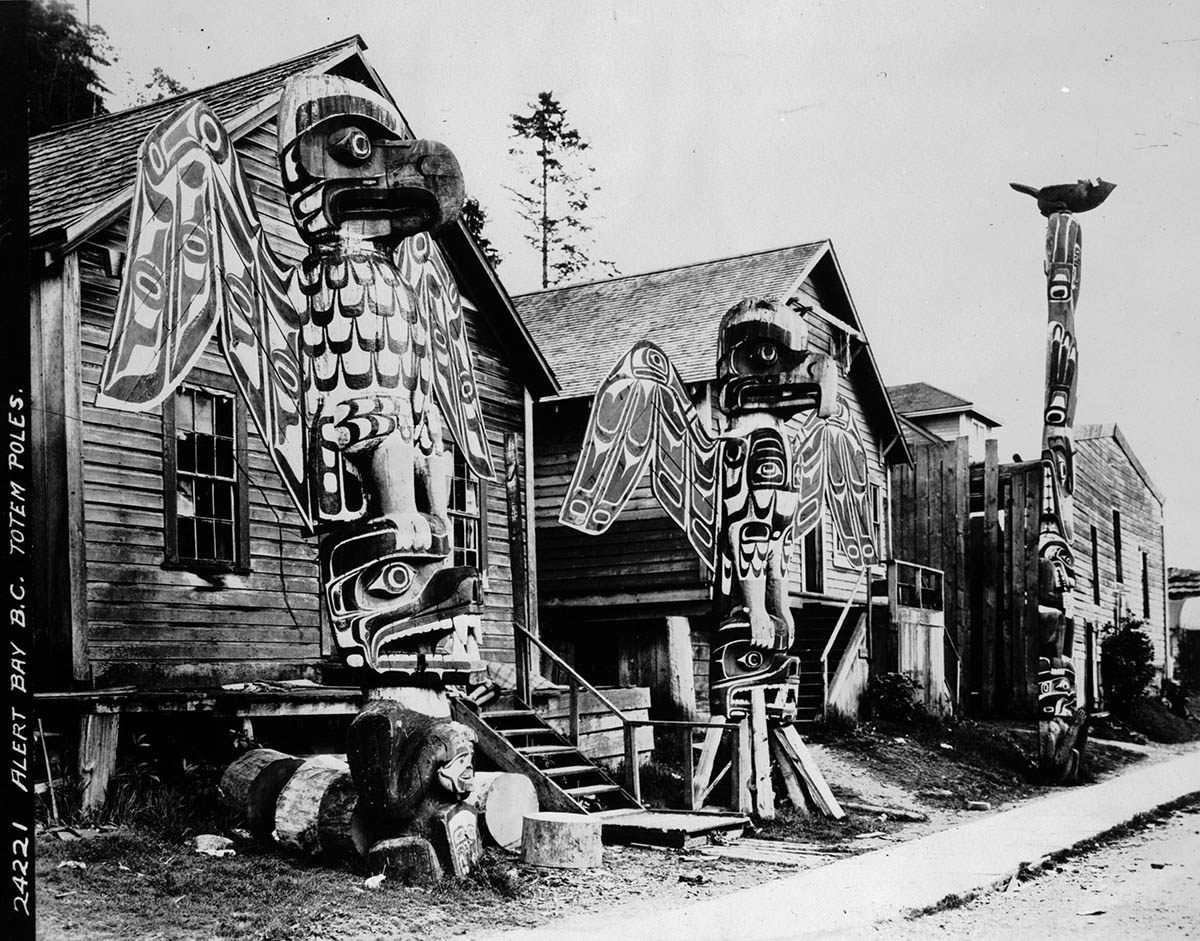 Under a blue sky we arrive at the deserted Village Island and a beach whitened by broken clamshells. Signs of a previously flourishing village are everywhere: broken pieces of pottery and metal litter the beach and a decaying totem pole lies horizontal in the forest. The midden (layers of broken clam shells left by centuries of First Nations habitation) has been dated at more than 6,000 years.

I can imagine the cries of anguish as Chief Dan Cranmer’s potlatch was raided and the treasures of masks, coppers, rattles and whistles were confiscated. This beautiful, lonely site captures the misguided callousness with which the “white man” ruled the “red man”.

We cruise on until a red petroglyph winks at us from a cliff. Believed to represent an image of the North Spirit, the red colouring came from fish eggs. We drop anchor at Crease Island for the night.

When we awake, fog hangs like an ethereal blanket over the sea and islands. 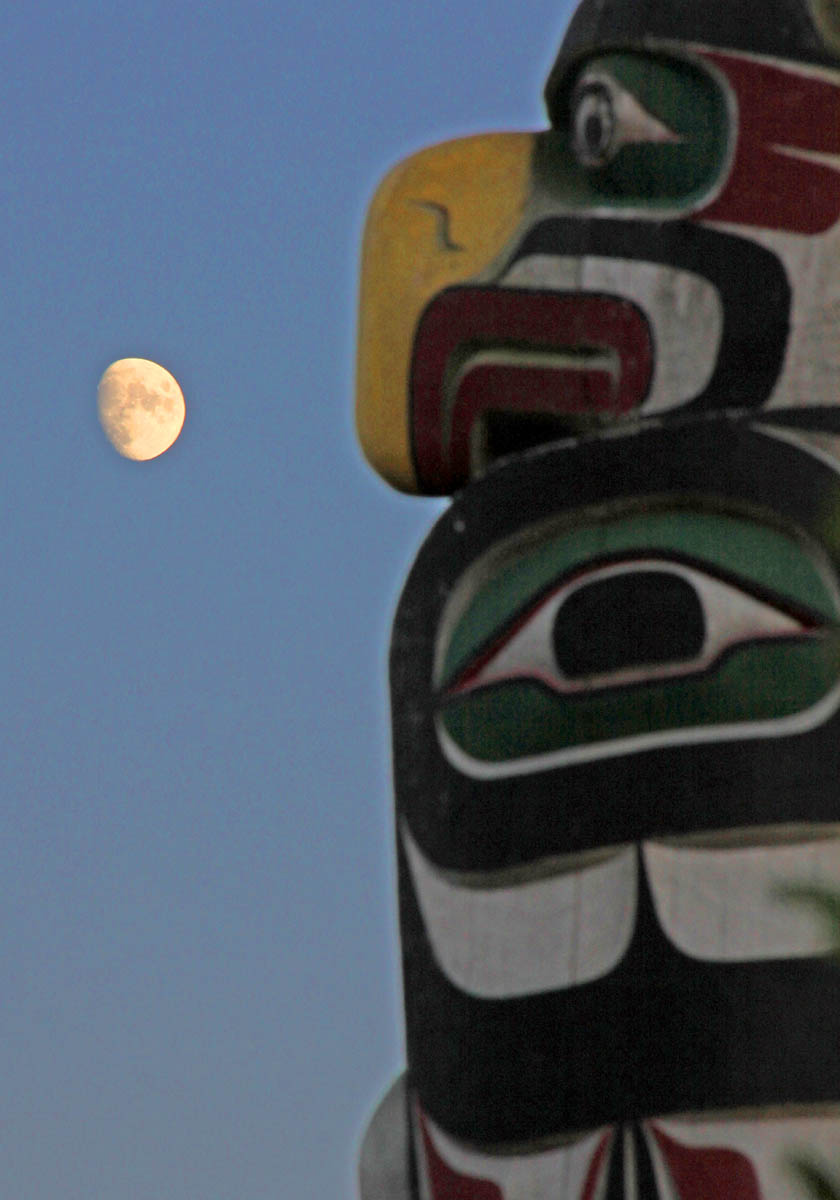 We motor to Sunday Harbour where a long wall of rocks lies along one of the bays. “This is a clam garden,” explains Lillian, “where clams were gathered at low tide.” As the First Nations say …

“When the tide is out, the table is set.”

At the Burdwood Group, a glorious gaggle of little islands, some of us paddle kayaks while others go ashore to explore the middens. I ponder the long Native history of living off this bounteous land and sea.

On our last day we return to Alert Bay and stroll past the cemetery, the residential school and the cultural centre. Back on the Columbia, leaning against the rail, I don’t know whether to rejoice or to cry.