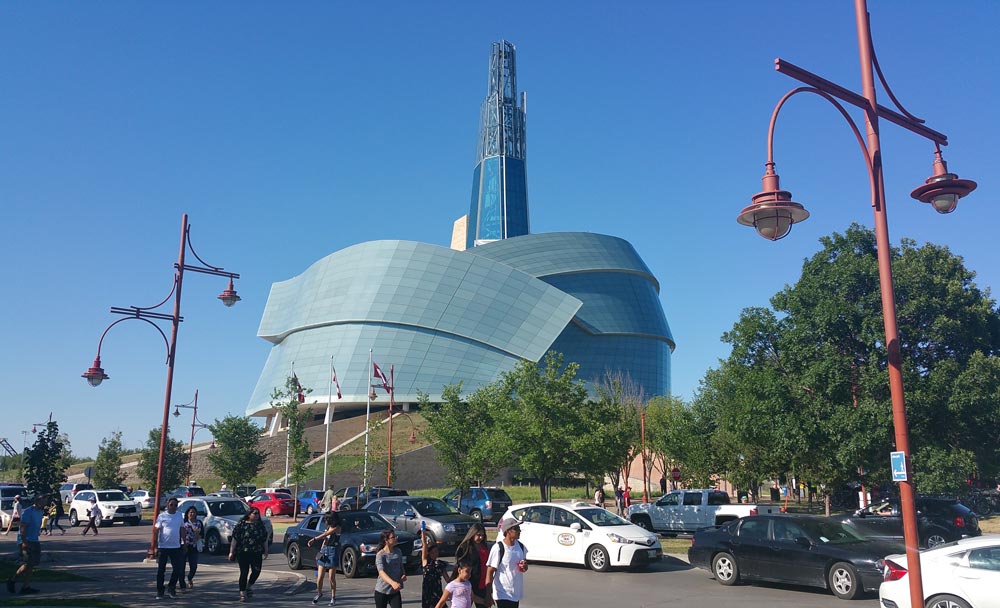 The Canadian Museum for Human Rights is situated pretty well smack dab in the middle of Canada, where the Red and Assiniboine Rivers converge, a traditional meeting place for First Nations and Métis peoples.
…….

This is my favourite big public building in Canada, even rivalling the National Gallery in Ottawa, my previous favourite. I thought it was cool the first time I saw artist’s renderings back in the early aughts. It took me a few years before I finally managed to visit, and it’s even better in person. It is bright and shiny and not at all what I expected in Winnipeg. 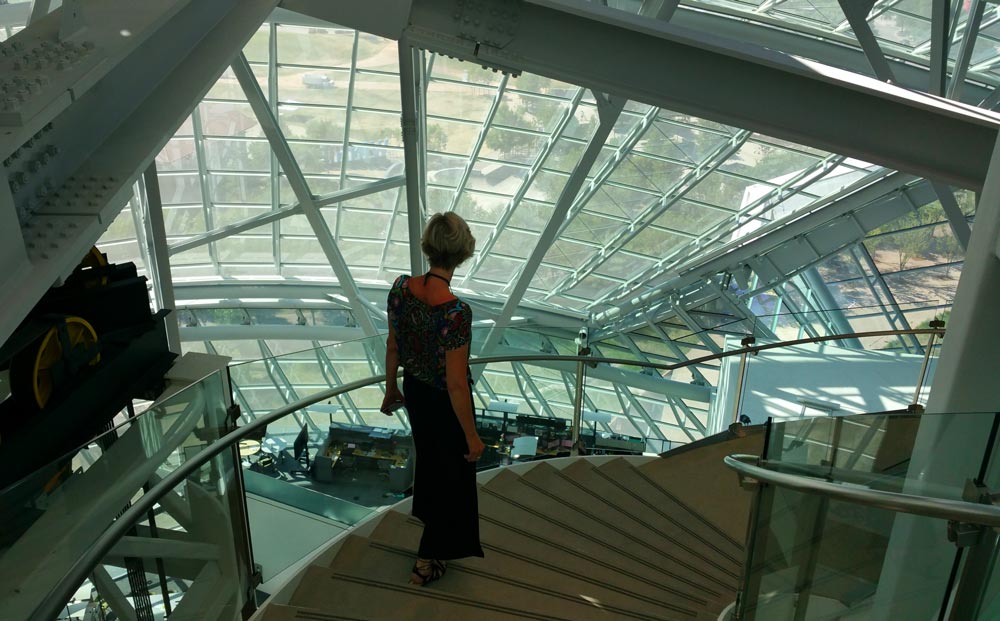 “… a symbolic apparition of ice, clouds and stone set in a field of sweet grass.”

At first I wasn’t sure what it was doing here. After all, it hasn’t been much more than a century since homesteaders on the prairies lived in sod houses, advancing up the accommodation food chain to shacks and log cabins. Architecturally speaking, Winnipeg is a great distance from Abu Dhabi.

“Izzy” Asper (1932-2003), is credited with the idea and vision to establish the Canadian Museum for Human Rights, the first new national museum ever to be located outside the National Capital Region. He was a Canadian tax lawyer and media magnate, founder and owner of the now defunct TV and media company CanWest Global Communications Corp. He was also the leader of the Manitoba Liberal Party from 1970 to 1975.
. . . . . . .

I was born in Winnipeg and my great grandfather built a handful of houses in town after the war. They were sturdy, sensible buildings with lots of strength to account for snow load and lots of insulation to account for the cold winters. Windows were small because they’re expensive, problematic, need constant maintenance and hey, if you want more light, go outside, right?

The Canadian Museum for Human Rights is all about opening up to the light, all 260,002 square feet of it. 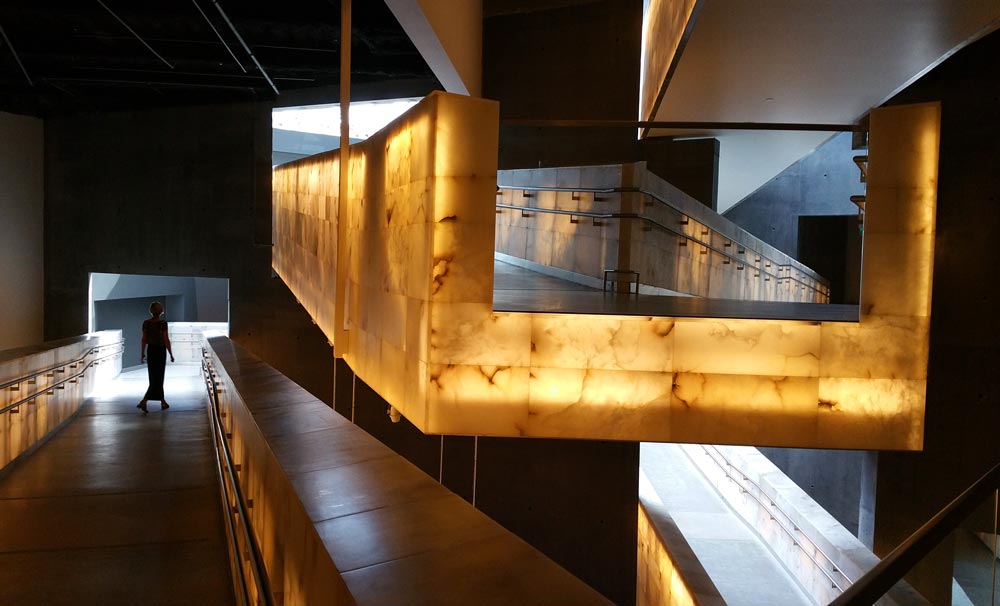 Over a kilometre of mysterious and delightful ramps and passageways provide access to various levels.
. . . . . . .

“Carved into the earth and dissolving into the Winnipeg horizon …”

Metaphorically, the “Roots” of the building clench the surrounding ground and provide tunnels and cloistered gallery spaces on the lower levels. Down each new corridor and around each new turn inside are hints of the light to come. As one ascends through the Stone Galleries the brightness intensifies until finally we explode among the heavens themselves in a crescendo of blue glass and steel, into the endless prairie sky. You’ll see what I mean when you go there. 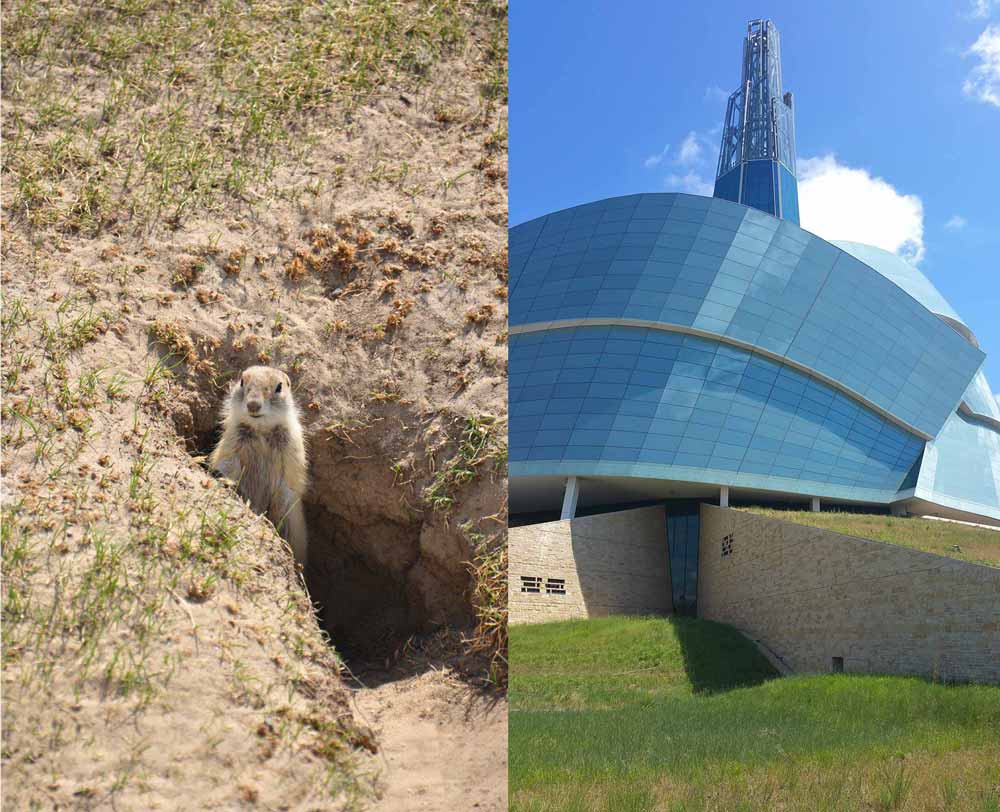 The Canadian Museum for Human Rights was designed by Antoine Predock, an American poet and STARchitect from Albuquerque, New Mexico who likes fast motorcycles, dramatic forms and no-BS, in-your-face geology. 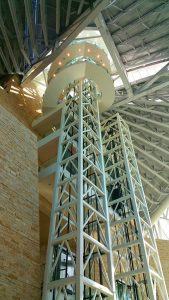 The exposed steel truss elements reminded me of railway bridges all over Canada.
. . . . . . .

But lest we fly too high, in the crystalline Tower of Hope there’s an observation deck with a great view, but don’t even think about going any higher than that, although one can clearly see the higher path. 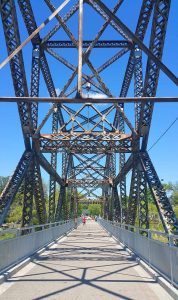 Winnipeg’s Elm Park Bridge opened in 1914. Car traffic was stopped in 1974 but pedestrians and cyclists continue to make it an integral part of the community. It is known locally as “The BDI Bridge” after The Bridge Drive-in, which has been scooping ice cream here since 1957.
. . . . . . .

Antoine Predock believes that buildings are a kind of ride, and this one is immense! It’s very participatory and inviting. How do they keep the kids from clambering all over this thing? I felt like rollerskating down the alabaster-clad catwalks, climbing the steel trusses and working out a few parkour moves over the basalt columns in the Garden of Contemplation before rappelling down the local Tyndall limestone cladding the daunting north face. Mr. Predock has been known to ski down some of his creations. But alas . . . 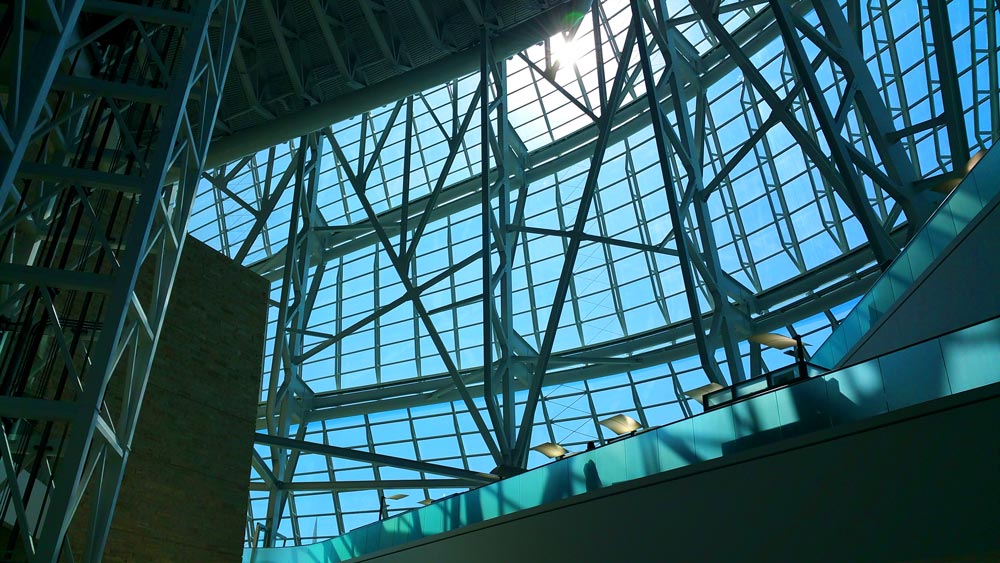 Canadian Museum for Human Rights from Provencher Boulevard – No two views are the same as you walk around the building.
. . . . . . . 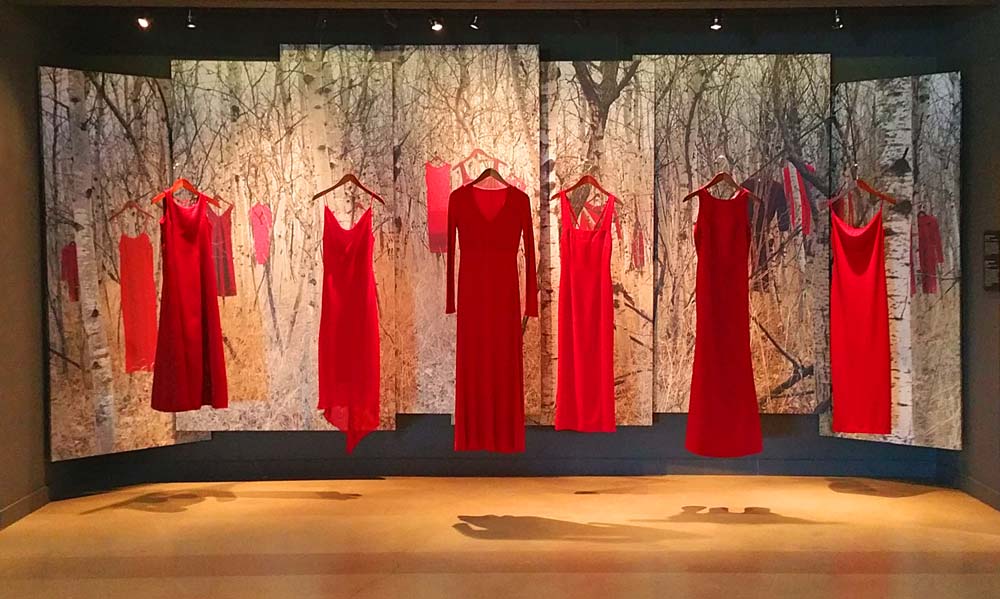 The REDress Project is an ongoing public art installation in response to the more than 1000 missing or murdered Aboriginal women and girls in Canada. Jaime Black is a Métis multidisciplinary artist based in Winnipeg.
. . . . . . .

I think it’s not possible to talk about this building without considering human rights in some way. That is, after all, the point of it. It is purpose-built. I tried to ignore all that. I wanted to experience the CMHR building itself with new and excited eyes, like a kid with a new toy. I just wanted to knock around the place for awhile, nose in the nooks and crannies, free for a time of the burden implied by the purpose of this pile. But the architecture is powerful and insisted on its way with me, so I came away from Winnipeg with an improved sense of the entangled, intersectional nature of Human Rights. Well done!

L’Esplanade Riel and the Provencher Bridge link downtown Winnipeg with St. Boniface across the Red River.
. . . . . . .