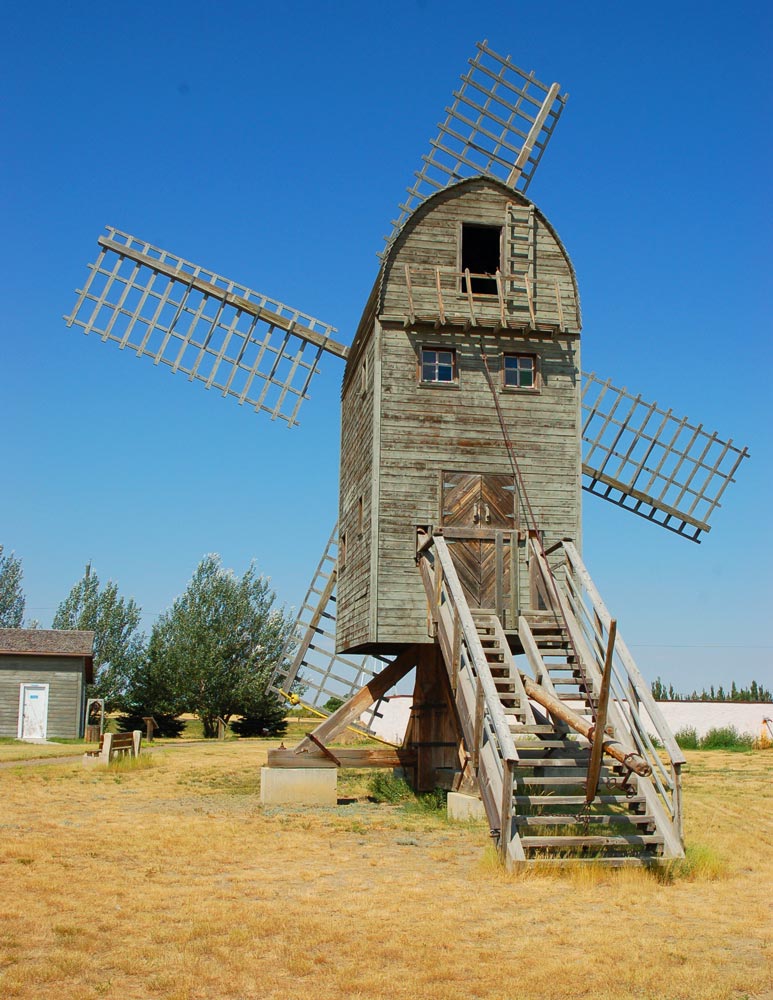 It wasn’t the gun that won the West – it was the windmill.

That’s what the sign says as you enter the backyard of retired Alberta farmer (and current provincial parliament member for Cypress/Medicine Hat) Leonard Mitzel.

His backyard – where nearly 20 historic windmills stand tall against the big prairie sky – was once the noisy playground for the only school in Etzikom, a village in southeast Alberta. There were 36 people living here when Mitzel and his wife, June, sold their farm in 1988, moved into the village and bought the empty school to start a museum. 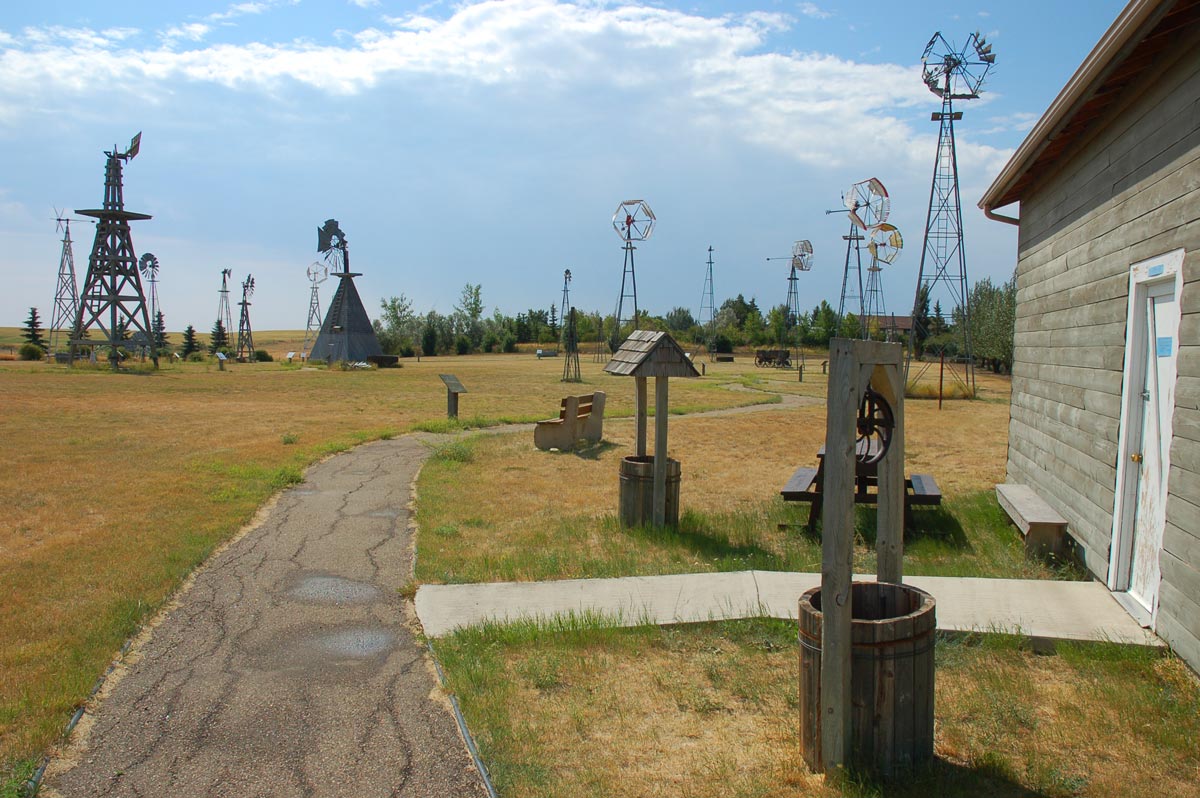 Today, there are 29 residents in Etzikom, but 5,000 visitors from around the world visit this tiny blip on the prairie each summer to marvel at the Mitzel’s collection of century-old windmills that were once spread across North America.

Their windmills come in a variety of designs, both mechanically and structurally, and Mitzel says without them, much of Western Canada wouldn’t have been habitable.

“Early settlement of the windswept plains was confined to areas which possessed springs or streams or shallow groundwater,” says Mitzel. “Water was vital to survive out here and if it wasn’t readily available close to the surface, people wouldn’t settle there. That’s why our sign says it wasn’t the gun that won the West – it was the windmill.” 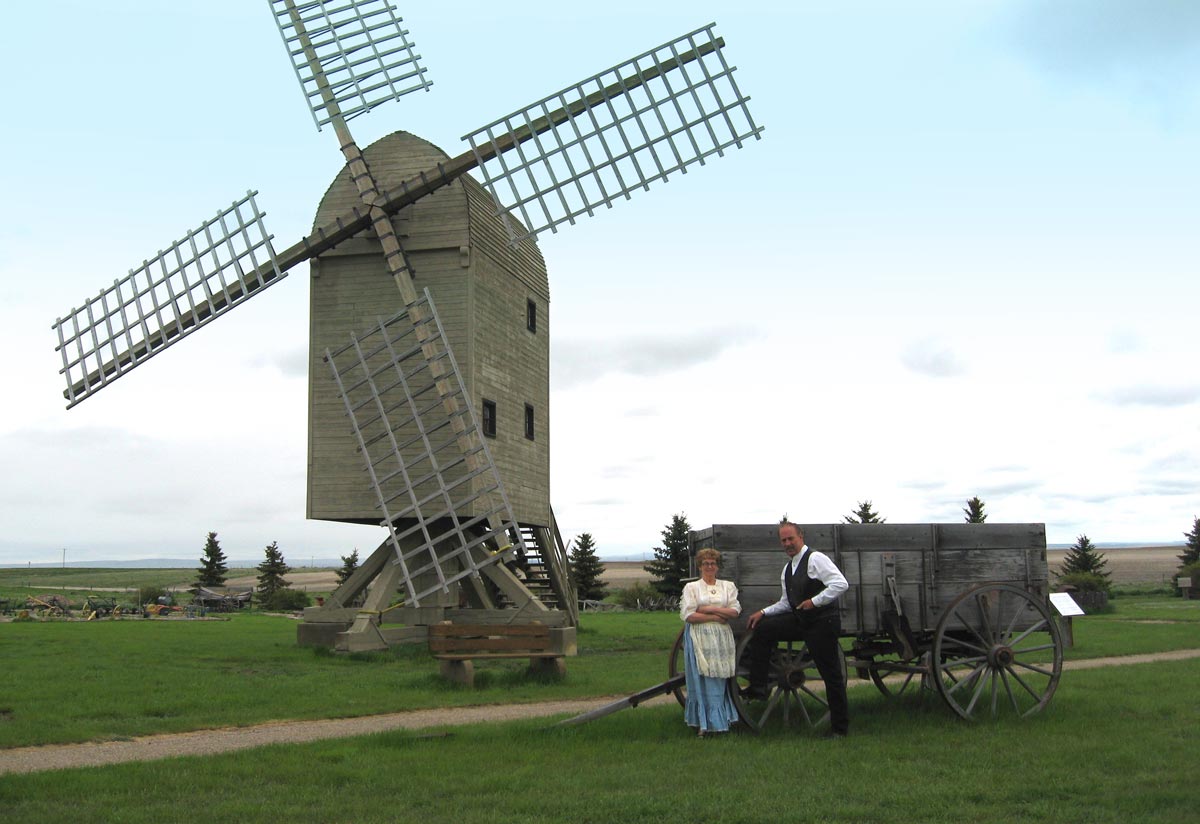 June and Leonard Mitzel in front of their signature windmill at The Canadian National Historic Windpower Centre in Etzikom, Alberta – photo by Pat Brennan
…….

The Canadian National Historic Windpower Centre that Leonard and June operate from mid-May to early September is Canada’s only windmill museum. Nearly every windmill in the former schoolyard has a story. The impressive “Post Mill” looks like it came direct from Holland. In a way, it did. It’s a replica of the first known windmill in North America, which stood in what is now the colonial town site of Williamsburg, Va. The replica was originally built on Martha’s Vineyard by Peter and Gerry Tailer. The Mitzels heard about it and when they went for a visit they learned the Tailers were willing to donate it to their new Alberta museum.

“It weighs 25 tons and fortunately we found an Alberta trucker who would be returning from an east-coast delivery with an empty trailer. We could get a good shipping rate, if we could get it on the truck.”

With the help of various friends the Mitzels managed to get the entire structure on the truck.

It’s big and clumsy and the entire building, where people worked grinding flower, turns into the wind. Mitzel said there were many in Canada like it at one time – one of the biggest being built in 1825 in Fort Douglas, Man., which today is downtown Winnipeg.

Many windmills were built along railway tracks to pump up water to feed the steam engine. Even the railway couldn’t survive without the windmill. 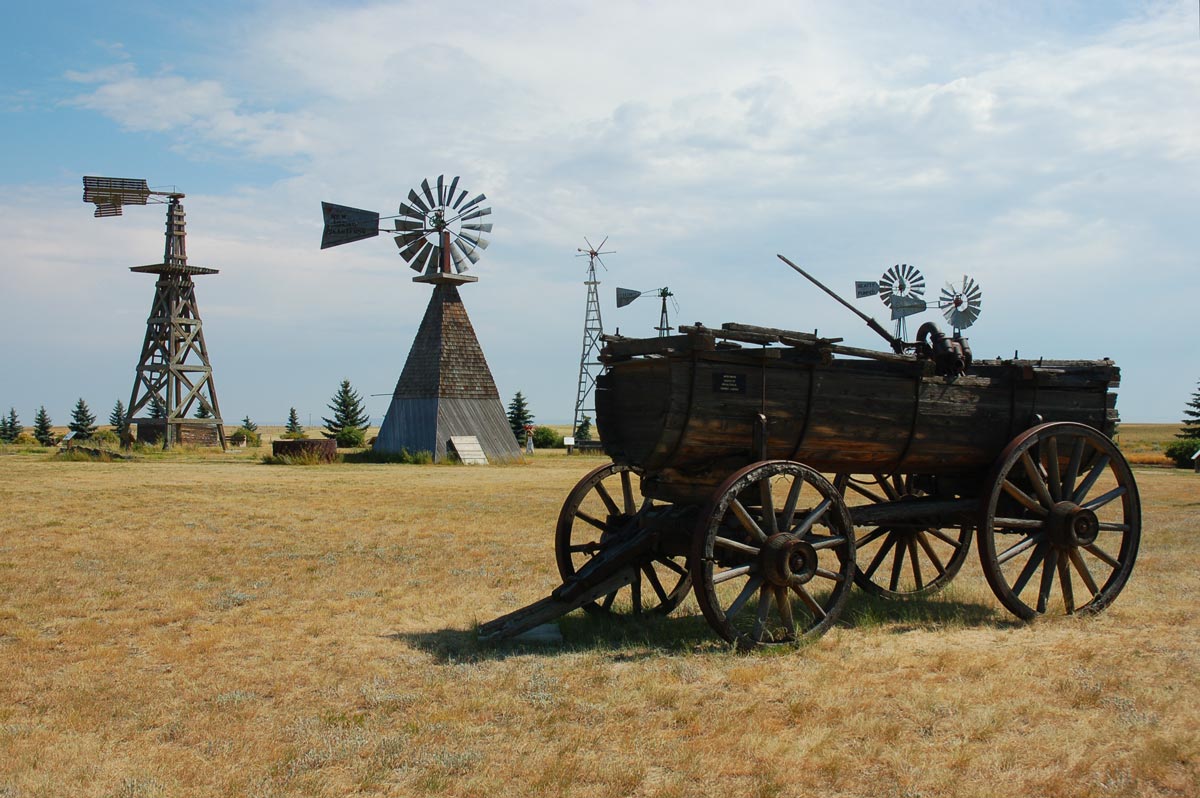 A spirit of the west is evoked on this piece of southeastern Alberta prairie at Etzikom.
…….

The “New Ideal” windmill at the museum was built by Goold, Shapely and Muir in Brantford from the 1890s to the 1920s. This super workhorse was a “post mill” like the one from Martha’s Vineyard, but was so diversified it could pump water from deep in the ground, grind wheat into flour, operate a stone sharpener, saw and washing machine – all at the same time.

The windmills tell their stories from out in the former playground, standing amidst antique farm tractors and implements. Inside the retired school, June Mitzel has recreated the lifestyles of 1900 Alberta. You can wander through a general store, hotel/boarding house, prairie school, blacksmith shop, post office, barber shop and typical rural prairie home. 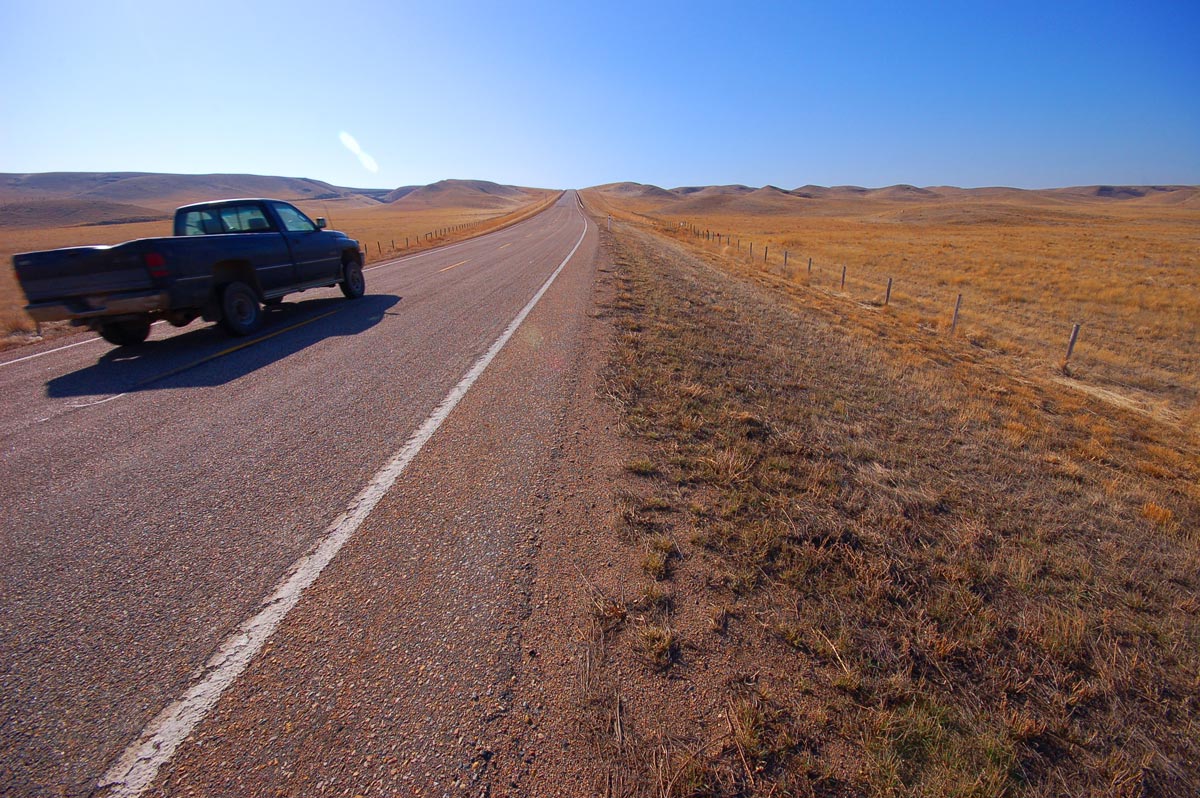 On the road between Seven Persons and Etzikom in southeastern Alberta
– photo by Glenn Cameron
…….

It takes a long time to reach Etzikom from Medicine Hat up on the Trans-Canada Highway. It’s not far – only 87 kilometres – but you’ll often want to stop and take photographs of the breathtaking scenery you encounter over each hill or around each bend. There are abandoned old churches leaning into the wind, thunderstorms on the distant horizon, elk grazing by the road, hawks snatching something from the wheat stumble, buffalo herds on domestic farms.
You may even stop to shoot photos of road signs – that say – “please don’t hit our snakes.”

Check out A Field Guide to American Windmills by T. Lindsay Baker. 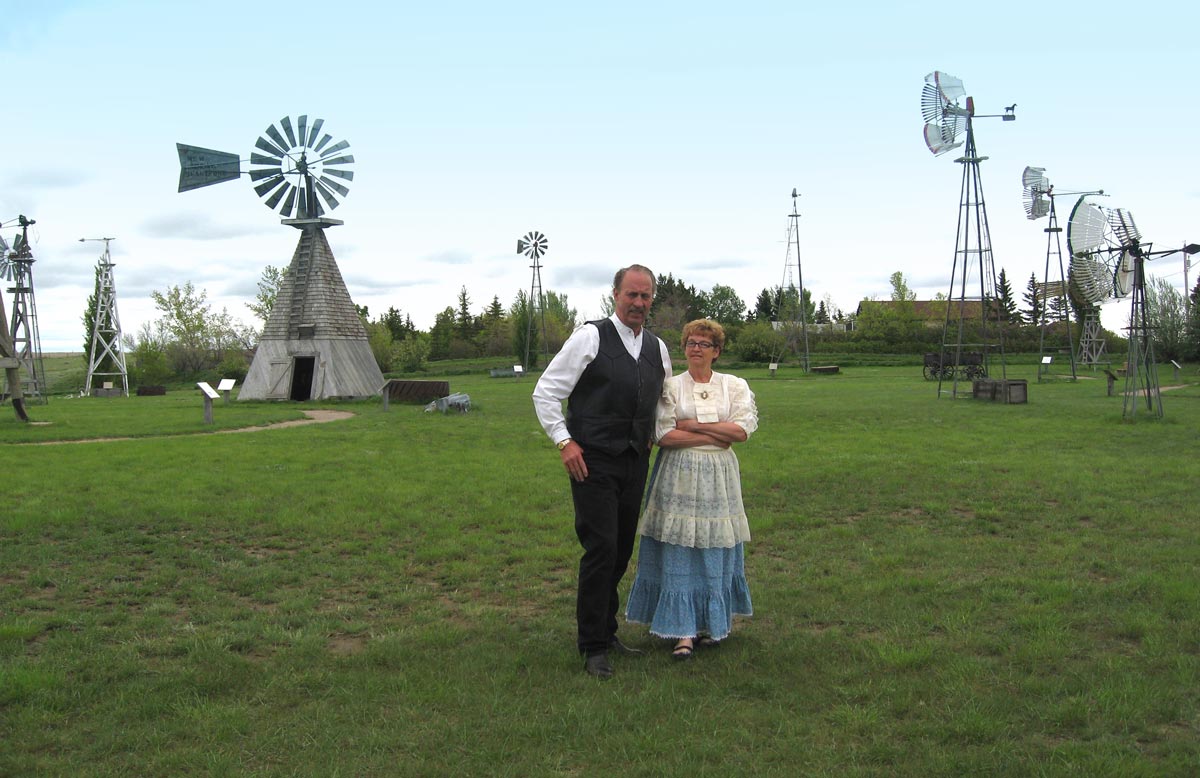 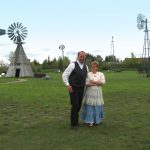 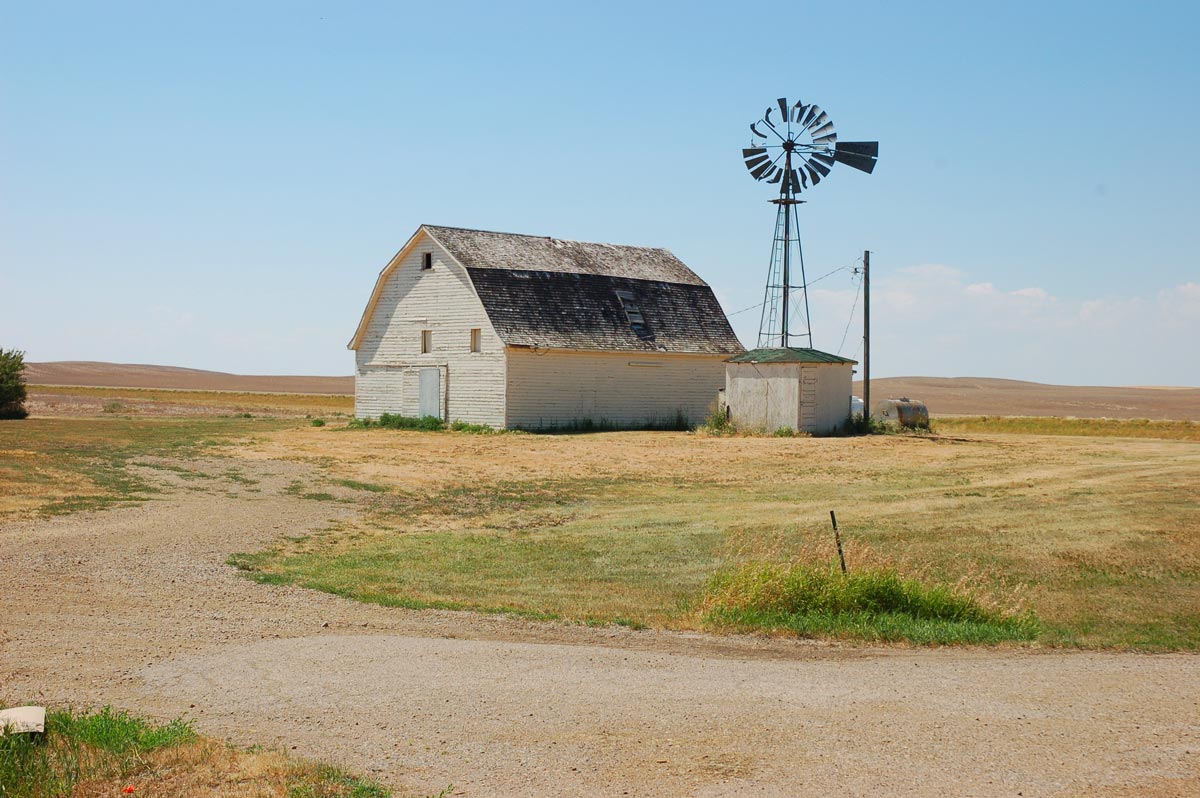 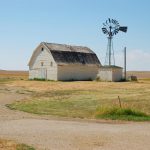 Windmill power on the Canadian prairies. Many of these communities did not get grid electricity until the 1950s. 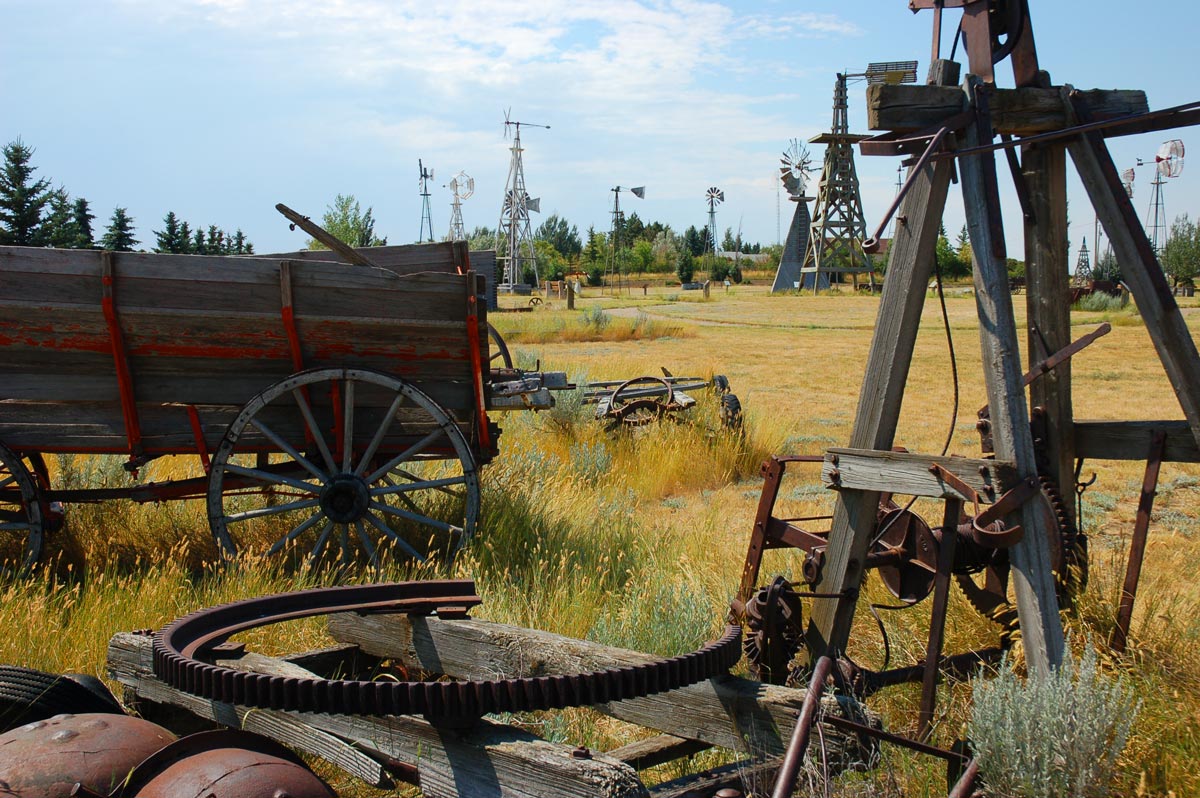 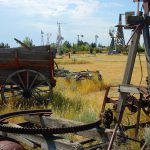 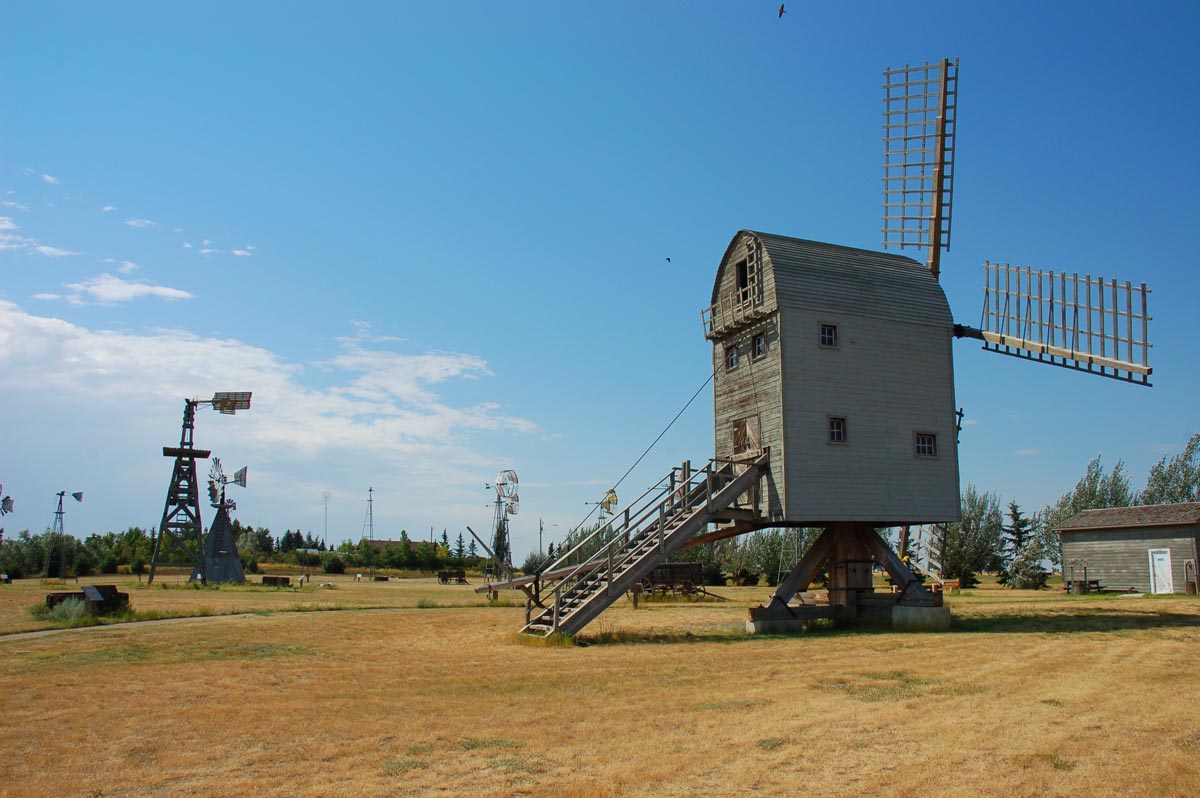 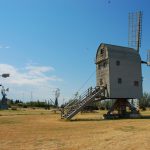 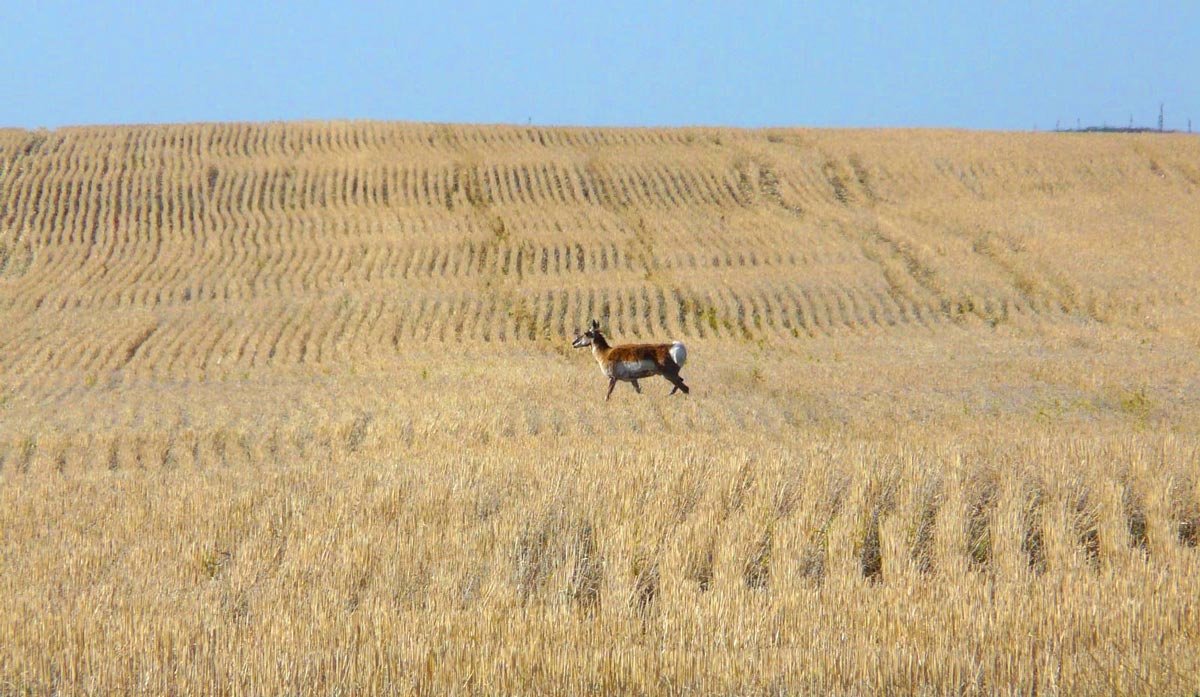 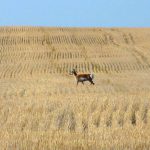 Where the dear and the antelope play. 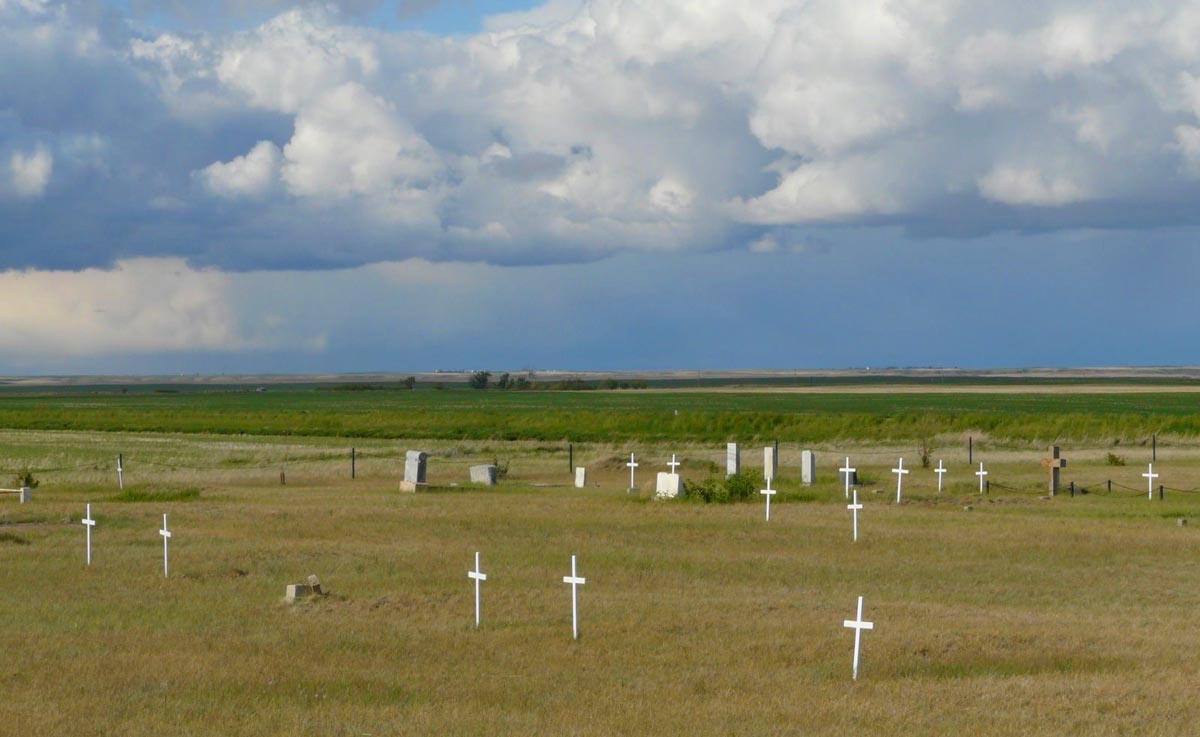 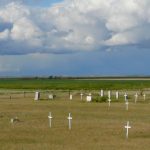 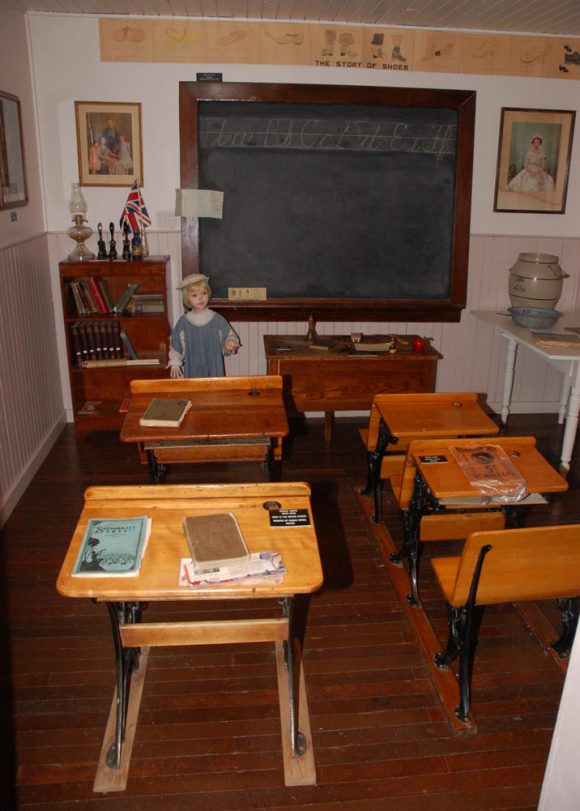 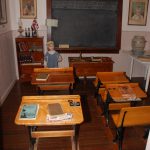 Inside the retired school, June Mitzel has recreated the lifestyles of 1900 Alberta.