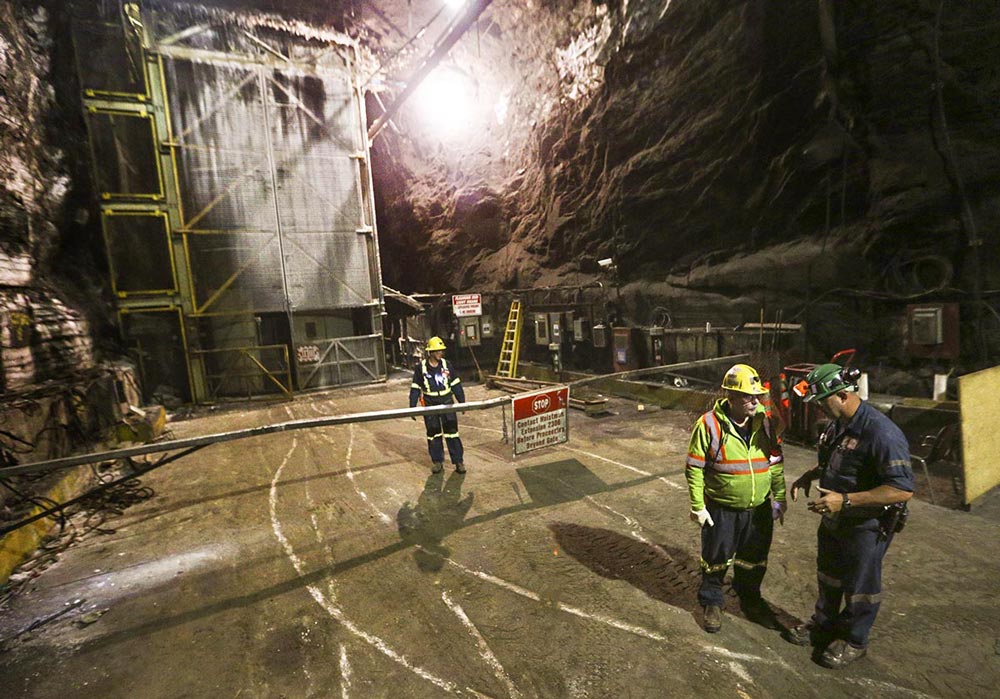 In the Goderich salt mine, two miles out under Lake Huron, Rowland Howe is standing at a street corner waiting for a bus.

He’s on his way home from one of Ontario’s most unusual factories.

Howe is manager of the world’s largest salt mine — a massive labyrinth under the lakebed — and the biggest employer in Goderich, Ontario. It’s his job to produce the stuff that causes those ugly white stains on your leather boots and pant cuffs in winter months. 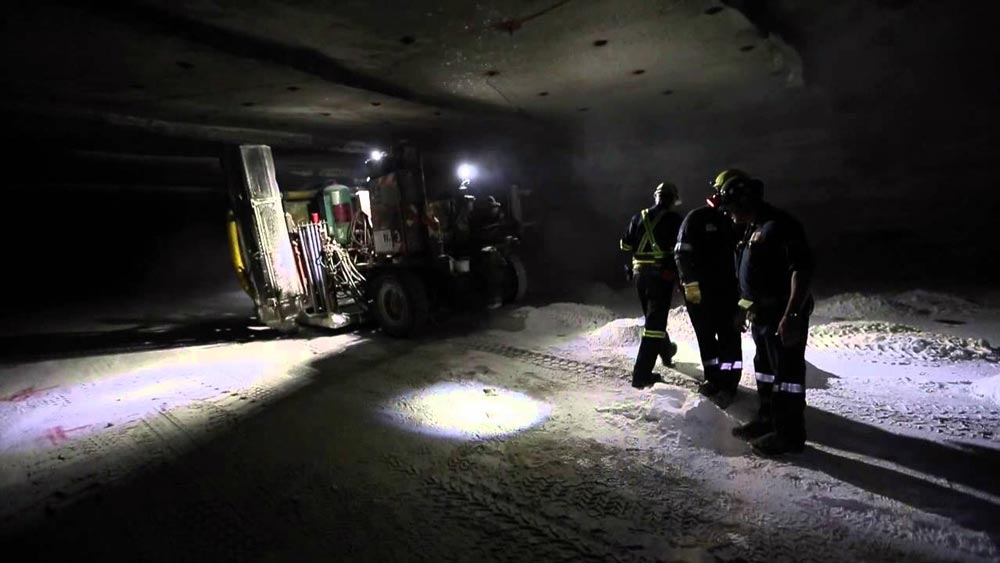 Two miles out under Lake Huron, the world’s largest salt mine is a labyrinth of passages under the lakebed.
. . . . . . .

This factory has more than 100 miles of roadways. They are part of an industrial town site that is actually larger than Goderich, the historic town up on the surface. The mine, operated by Sifto Salt, a subsidiary of Compass Minerals of Kansas, supplies much of the salt applied to slippery streets each winter throughout Toronto and other cities in the Great Lakes area of U.S. and Canada. 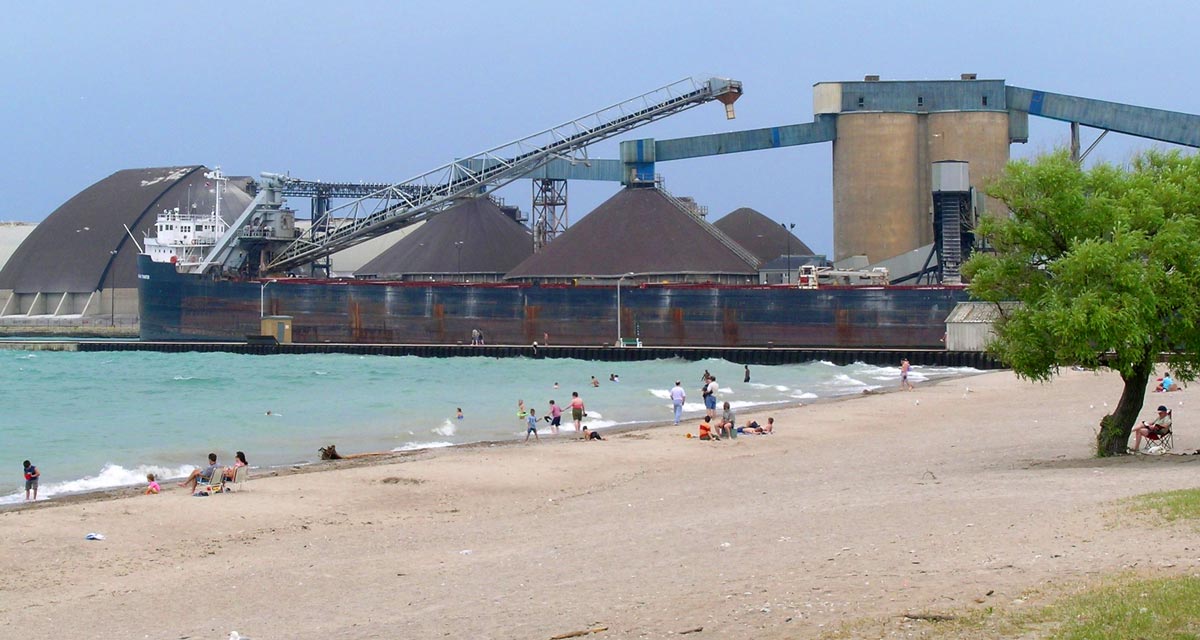 Deep below the waters of the lake more than 400 people work in this subterranean town chewing away at walls of salt deposited about 400 million years ago by an ocean that covered the Great Lakes basin. The mine is so large that it once had a bus system transporting miners out to their work areas a couple of miles off Goderich’s beaches.

“We used to operate a couple vehicles like a bus system to transport workers, but now there are so many routes to follow that we have about 30 or more John Deere Gators carrying workers out to the rock faces,” says Howe.

Some of the world’s largest dump trucks also rumble along these subterranean streets that are wider than Yonge Street. The 40-ton behemoths are stripped down to their frames to be lowered 1,800 feet down the mine shift in bits and pieces, rebuilt, and never again see the light of day.

“Getting a dump truck into the Goderich salt mine is a little like building a ship in a bottle,” says Howe.

All maintenance and repairs are carried out in a large service depot carved out of the salt bed. So too are the lunch rooms for mine workers, storage caverns, workshops, rooms for electric transformers and a huge crushing plant that grinds salt blocks brought to the mill by the dump trucks and five miles of conveyor belts.

Rust is not an issue for these vehicles, even though they drive on roads of salt. There is a constant 65-degree temperature in the mine and little or no water seepage. Lake Huron is 200 feet deep in this area and the mine starts about 1,600 feet below the lake bottom.

Blasting at different locations in the mine each workday breaks loose big chunks of rock salt. Miners will extract about six million tons of salt from the mine this year and much of it leaves town in the holds of large lake freighters, which tie up at Sifto’s front door. Trucks and trains also cart away the product as the salt is used in at least 1,000 other products as well as making slippery roads safe. 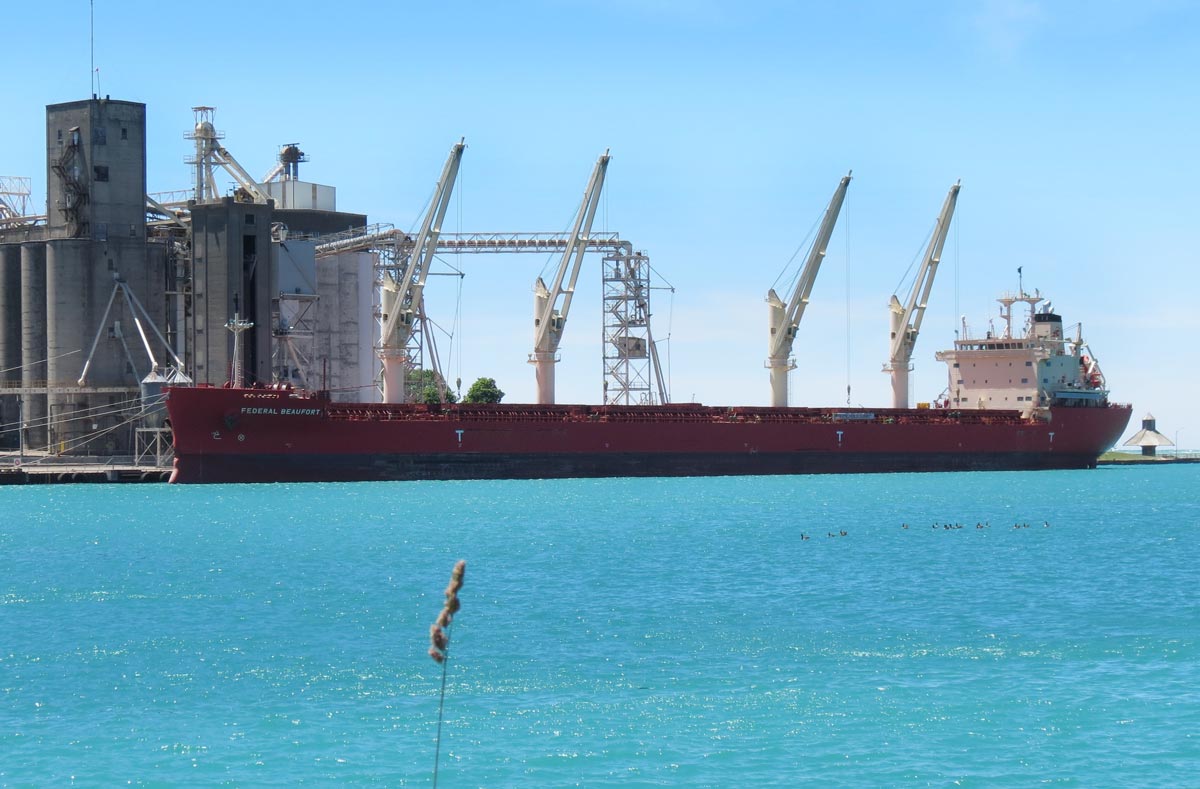 Goderich harbour ships more than salt. It’s always been a busy port for Ontario agricultural products too – such as the corn, soya or grain that the bulk freighter Federal Beaufort is loading in this picture.
. . . . . . .

The miners chew out rooms of salt 60 feet by 60 feet, but leave pillars of the same size untouched to support the ceiling before moving on to the next room.

Sam Platt was looking for oil in Goderich in 1866 when his drill bit dug into a salt bed about 1,000 feet below the surface. He wasn’t disappointed, as salt was more valuable than oil in those days. Platt had discovered North America’s first commercial salt bed. Near Platt’s drill site Sifto is still extracting salt the old way. They pump water down into the salt bed, bring up salt water and then evaporate the water.

What’s left after a year of pumping water is 120,000 tons of 98.2 per cent pure salt. This salt is used primarily for human consumption and in water softeners. The salt mine was opened in 1959. Howe says it can be mined by many generations yet to come.