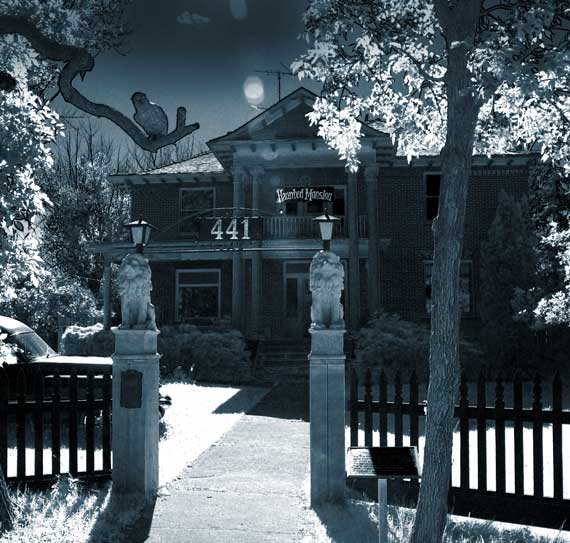 We are not a superstitious people, not susceptible to assumptions of supernatural causation. But facts are facts, and we are a curious bunch. So every year at about this time we venture out, often by candlelight, in search of the truth that awaits us in the cold darkness…

European settlement in Nova Scotia dates back to the seventeenth century. In Canadian time, that’s a lot of history. @AuthenticCoast  and @travelbyterry have been tweeting me about an interesting Nova Scotia haunt. The DesBarres Manor Inn was built in 1837 in the seaside village of Guysborough on Nova Scotia’s eastern shore for Supreme Court Justice, W.F. DesBarres. Justice Debarres was the grandson of J.W.F. Desbarres, a military man and mapmaker who accompanied Major-General James Wolfe at the great battle on the Plains of Abraham. It is rumoured that Wolfe gave DesBarres his pocket watch at the moment of his death, and that it hung in the Manor for many years. Spooky! 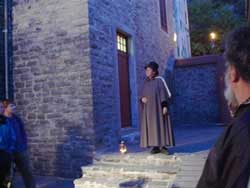 Surrounding the Plains of Abraham is Québec City. As night falls, Ghost Tours of Québec guide visitors through the cobble stone streets and ancient buildings of the old city, regaling them with tales of murders, executions, mysterious sightings, tragedies and hauntings.

Mon Dieu! Tours are in English and French.

In Ontario (known before confederation as Upper Canada), Fort George is regarded by many as the most haunted place in Canada. It was headquarters for the British military in Niagara during the War of 1812, and the scene of much blood, death and suffering. Many soldiers and civilians alike are still buried on the grounds of the fort. Some people say that distant cries can still be heard there.

If you dare to set foot in the fort on a weekend in October, check out the Friends of Fort George Halloween ghost tour. This two-hour guided candlelit walking tour is conducted by Ghost Tours of Niagara.

In the Canadian Badlands of southeastern Alberta, ghost tours and other paranormal events are wafting through the mist. The Haunted Atlas Coal Mine has BIG BOO and LITTLE BOO tours into the darkest corners of the abandoned coal mine. The Medalta Ghost Hunt is a nocturnal tour through a 100 year old pottery factory led by the Medicine Hat Paranormal Investigation team. And in the normally peaceful village of Stirling, Alberta, the Haunted Stirling Mansion is one of the best-produced haunted houses I have seen anywhere in Canada.

Lost in the Haunted Stirling Mansion

On Twitter, the Stanley Park Hallowe’en Ghost Train is known as @Ghost_TrainYVR. This year’s theme is Circus of Disaster. @Ghost_TrainYVR has been tweeting little teasers about this year’s event. Example: “The 1st circus in Ancient Rome was called the ‘Circus Maximus’ & more than 200-thousand people came to watch the show” Here’s a review of this year’s ghost train from the Georgia Straight, a popular Vancouver area media outlet.

If you know of a ghost tour or spooky Canadian factoid, please share it with us in the comments below.