A Killer Site near Fort MacLeod in southern Alberta
……. 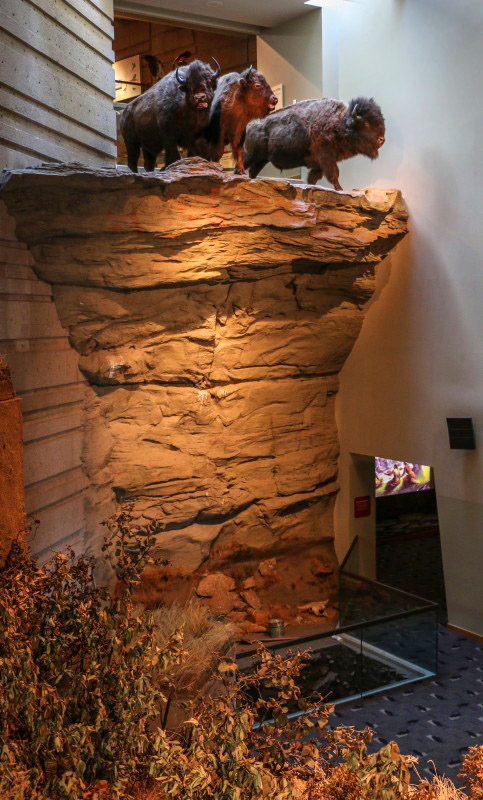 Diorama in the lobby of the Head-Smashed-In Buffalo Jump World Heritage Site
– Photos by Hans Tammemagi
. . . . . . .

Driving south from Calgary on billiard-table flatness punctuated with yellow canola fields and large round bales of freshly mown hay I don’t expect cliffs. But nearing Fort McLeod, hills rise to the southwest and then we arrive at Head-Smashed-In Buffalo Jump, the biggest and best buffalo jump in North America. A teepee stands like a tall sentinel on the grasslands leading up to the visitor centre and the cliffs that lie next to it. 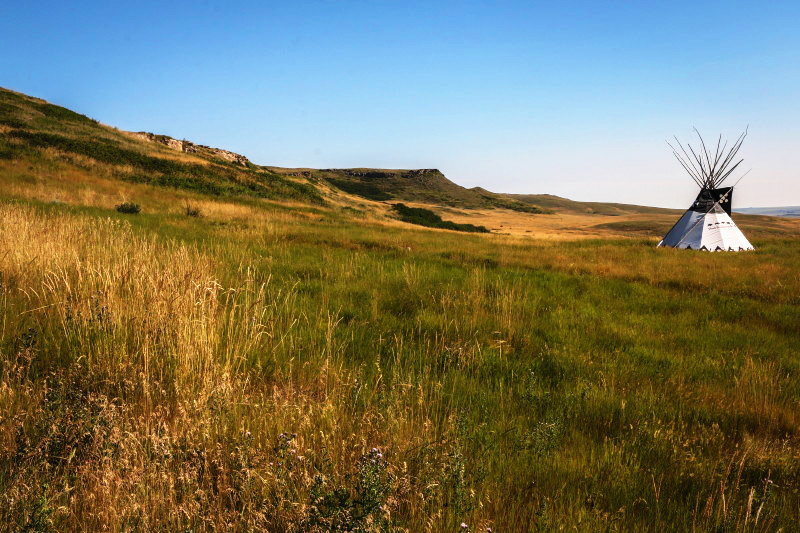 Near the teepee a group is performing a Pis’kun, a re-enactment of a buffalo (aka bison) hunt. About ten people wearing buffalo hides form the herd. OK, they’re a far cry from the immense herds of enormous creatures that once roamed these plains, but the children are waggling their forefingers in the air, pawing the ground and enjoying the “hunt.”

Watching them, I’m caught up in the excitement too. Quinton Crow Shoe, a lead interpreter, says, “The Pis’kun was communal hunting involving many clans, and was very complex. It required a lot of skill and was perfected over centuries.” 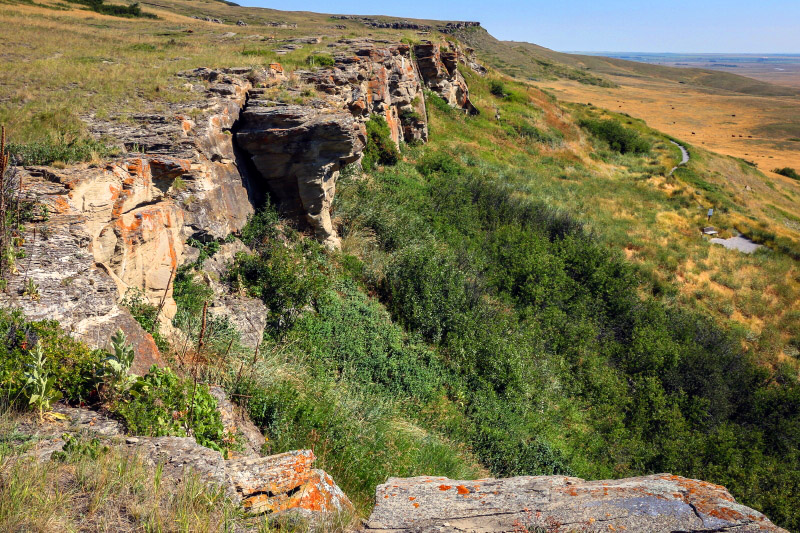 The deep layers of bison bones buried below these cliffs represent nearly 6000 years of use of the buffalo jump by Aboriginal people of the Northern Plains.
. . . . . . .

Crow Shoe explains how the pastures near the site were burned to create fresh, rich grass so the herds would return. Young men dressed in wolf skins and covered in wolf fat to disguise their human scent would rise and frighten the herd toward the cliff along a drive lane marked by stone cairns. Near the cliff edge, a Blackfoot would mimic the call of a lost calf, luring the herd forward. It was not an easy task to guide 150 to 300 buffalo to and over a cliff. It required knowledge, agility and, not the least, bravery, for the bison are not only large and strong, but also agile. A single buffalo can weigh over a tonne, jump close to 1.8 m (6 ft) vertically and run at speeds up to 56-64 km/h (35-40 mph) when agitated. 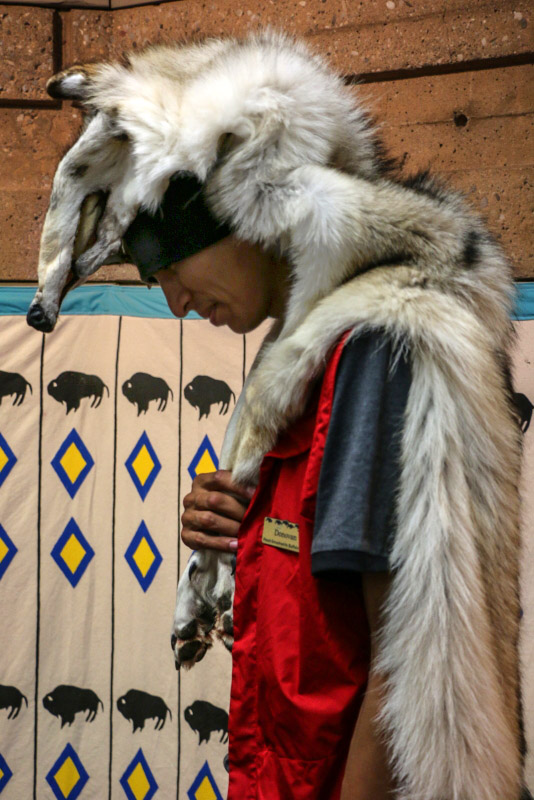 At the bottom of the cliff the job of butchering the buffalo was also complex for all of the animal was used. The meat was dried and mixed with berries to make pemmican. The hides were used to make tipis, clothes, moccasins and more. The bones were carved to make knives, and boiled to make glue. The sinews were used as bowstrings and thread.

Crow Shoe says, “We treated the buffalo with respect, we wouldn’t cheer at the end of the hunt. The animal is sacred and a religious symbol to us.” 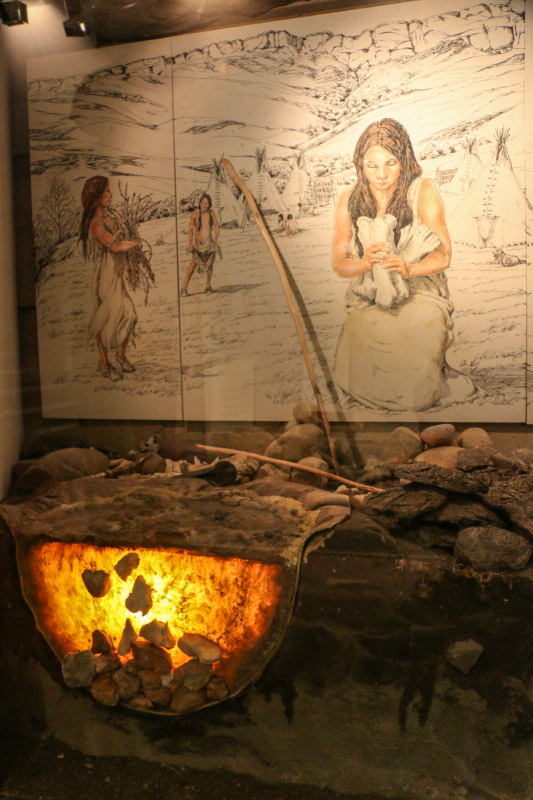 Using their excellent knowledge of the topography and of buffalo behaviour, they killed their prey by chasing them over a precipice; the carcasses were later carved up in the camp below.
. . . . . . .

I walk to the Centre, which consists of seven levels melding into the slope. The lobby is impressive, dominated by a diorama of several buffalo atop a large cliff. In the lodge, Elder Caroline Yellow Horn and her granddaughter Isabel are seated next to an array of traditional weapons and tools laid out on a blanket. An enormous stuffed buffalo towers over them. Elder Yellow Horn describes how in 1981 UNESCO designated Head-Smashed-In Buffalo Jump, where the Blackfoot have hunted buffalo for nearly 6,000 years, as a World Heritage Site placing it among the likes of the Egyptian pyramids and Stonehenge. The award-winning visitor centre opened in 1987.

She lights some sage and I’m honoured by a smudge ceremony. “We must purify our spirits before we pray,” she says, wafting the smoke over herself. I repeat the process, a very moving experience. 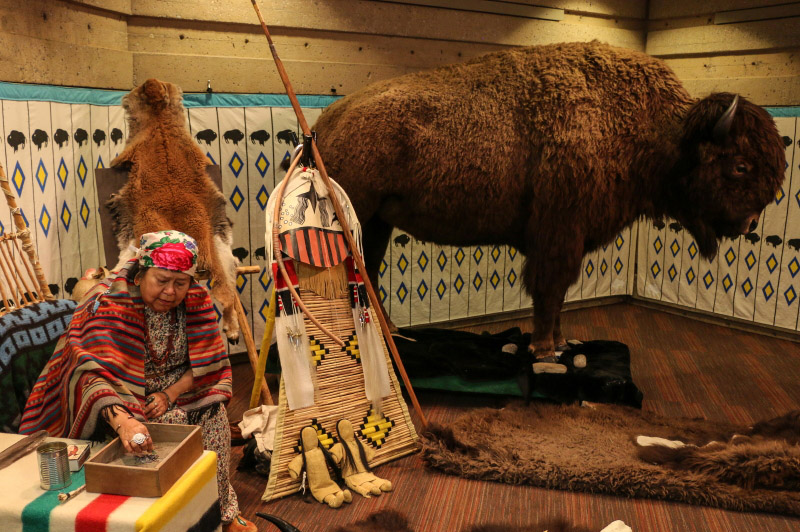 “When I left the reserve I met many young people who knew nothing of our culture,” she says, “but in the past few years there’s been a renaissance, things are improving.” Isabel agrees and describes the Blackfoot language lessons she’s taking.

Then Interpreter Donovan Good Striker leads me through many displays that describe how the buffalo was interwoven with the Blackfoot culture. 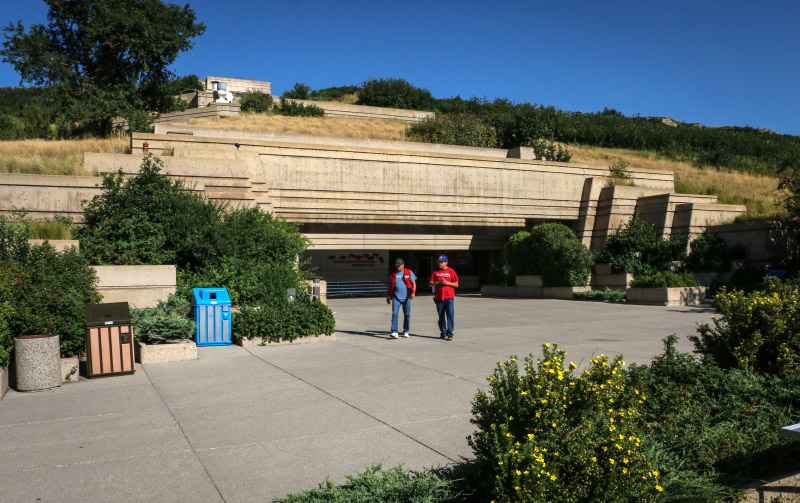 We exit the building and stroll along a clifftop path. From this vantage point I can envision the immense herds of buffalo — more than 60 million — that once roamed the plains. Sadly, they were hunted close to extinction. By 1889, less than 500 remained, one of the cruelest indignities forced on Native people. 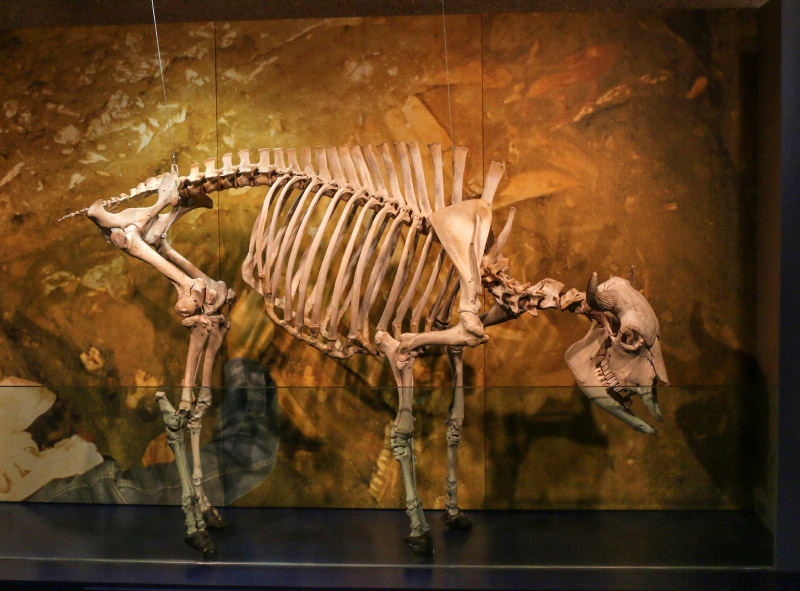 As I leave, the Pis’kun activity has ended and the visitors are “throwing” an arrow at a “buffalo” target using a wooden atl atl. The atl atl is about 60 cm long with a notch near one end where the arrow fits and a handle at the other end. The atl atl acts like a lever allowing long, powerful throws. 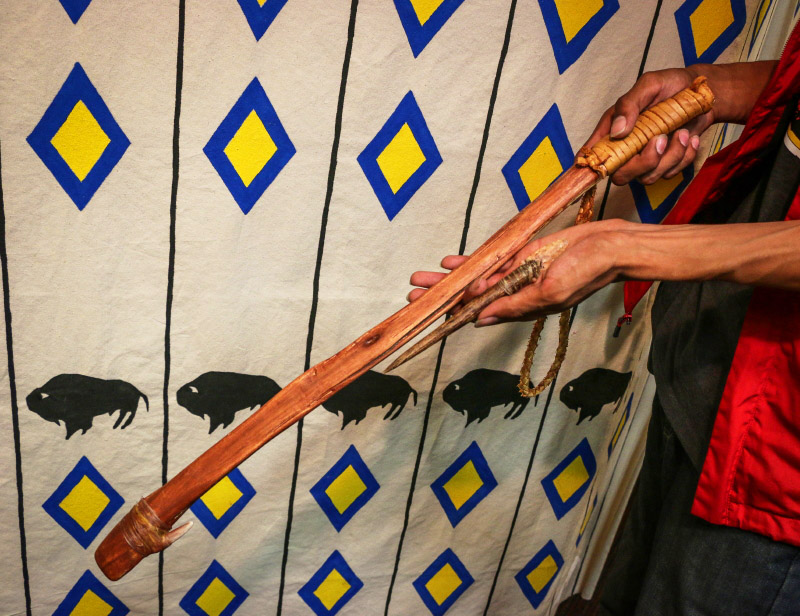 As we watch, Crow Shoe says, “The goals of this site are to showcase our Blackfoot culture, and offer employment to our people. It’s been successful. I feel Head-Smashed-In Buffalo Jump is the premier aboriginal tourism site in western Canada.” I can only nod in agreement. 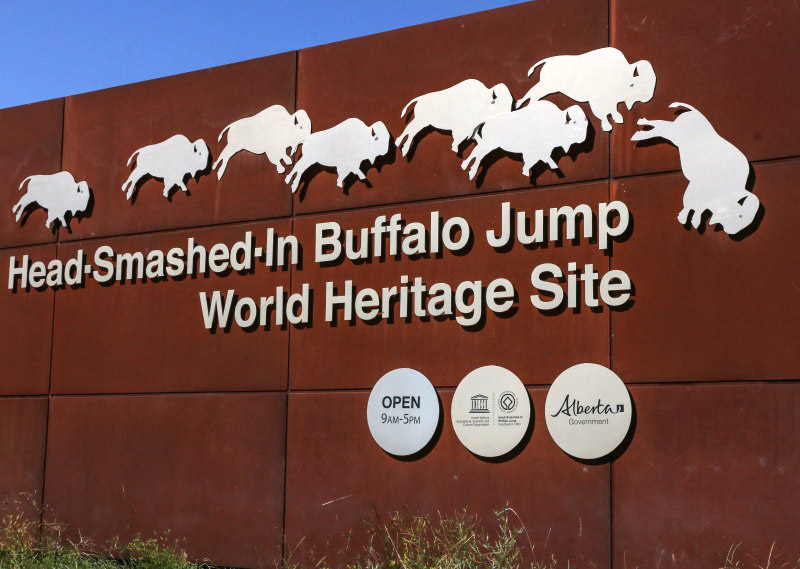