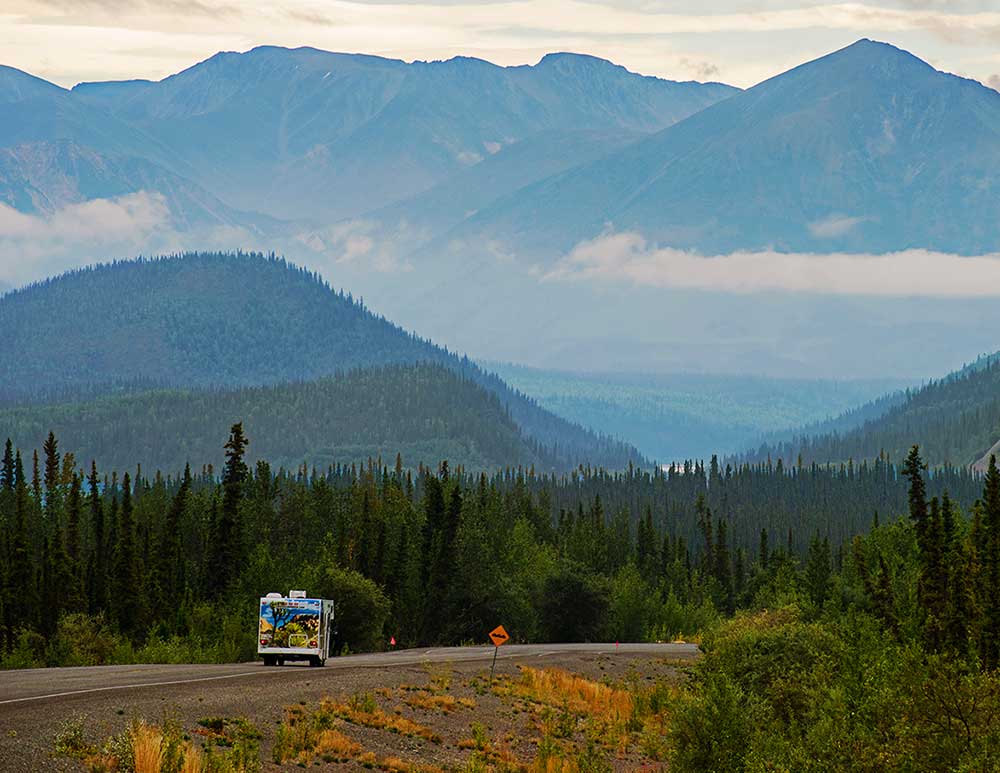 Kluane National Park is Canadian wilderness at its most magnificent. Sprawling across southwestern Yukon, it’s home to the world’s largest icefields outside the polar regions, 17 of Canada’s 20 highest mountains, along with glaciers, wild rivers and wildlife galore. The natural features are so significant that the huge complex including Kluane and adjoining preserves in northern BC and Alaska has been designated a UNESCO World Heritage Site. 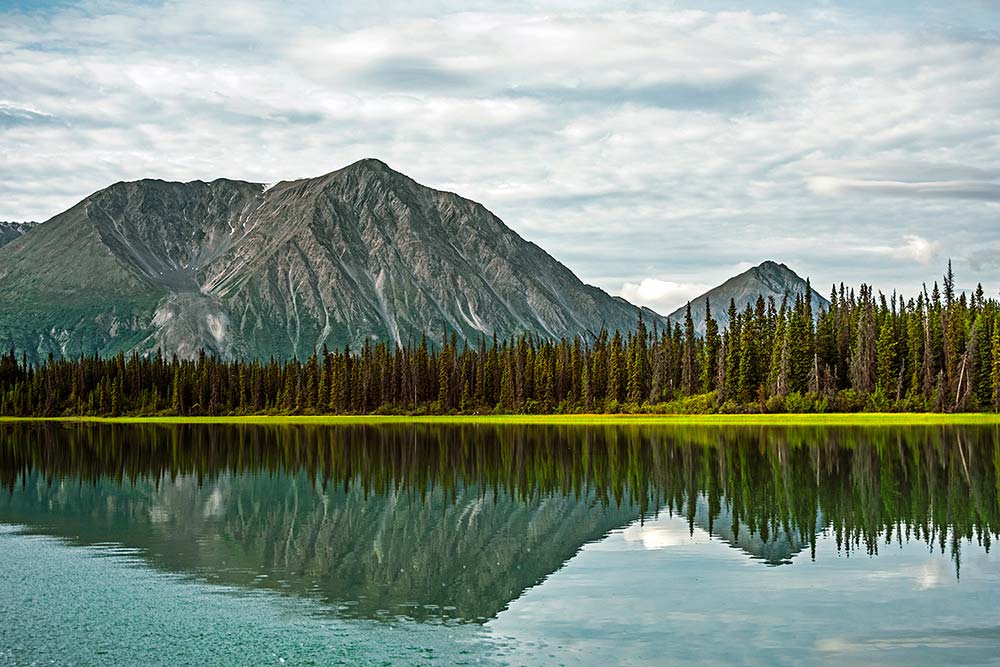 An untouched wilderness of mountains and ice may not sound like a place for a road trip, but visiting Kluane couldn’t be easier. Roads don’t run through the park, but the paved Haines and Alaska Highways run along the northeastern edge of the park and adjoining Kluane Wildlife Sanctuary. Access points lead to a series of lakes, picnic sites, hiking trails, accommodation and campgrounds, both inside the park and just outside. 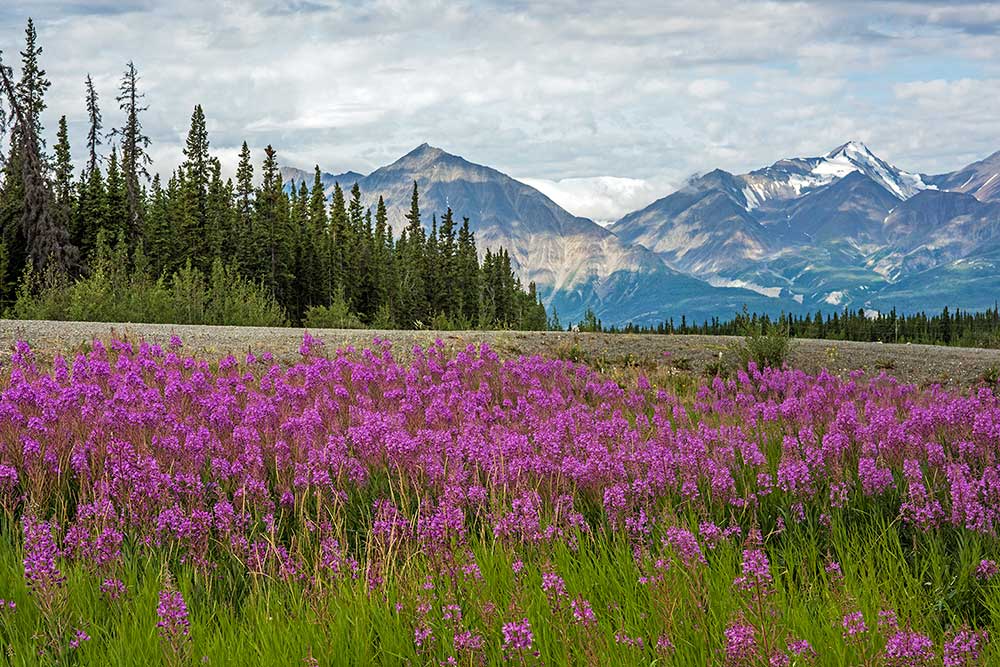 Fireweed – the official floral emblem of Yukon – along the mountains of Kluane National Park.
. . . . . . .

The small town of Haines Junction, reached via the Alaska Highway from Whitehorse, is the park’s main service centre. A large complex houses the Parks Canada and Yukon visitor centres, along with the DaKu Cultural Centre, focussing on local First Nations groups. A must-see is the unusual Our Lady of the Way Catholic Church, built in 1954 from a quonset shed, fitted with a more elaborate entrance. It is said to be the most photographed church in Yukon. 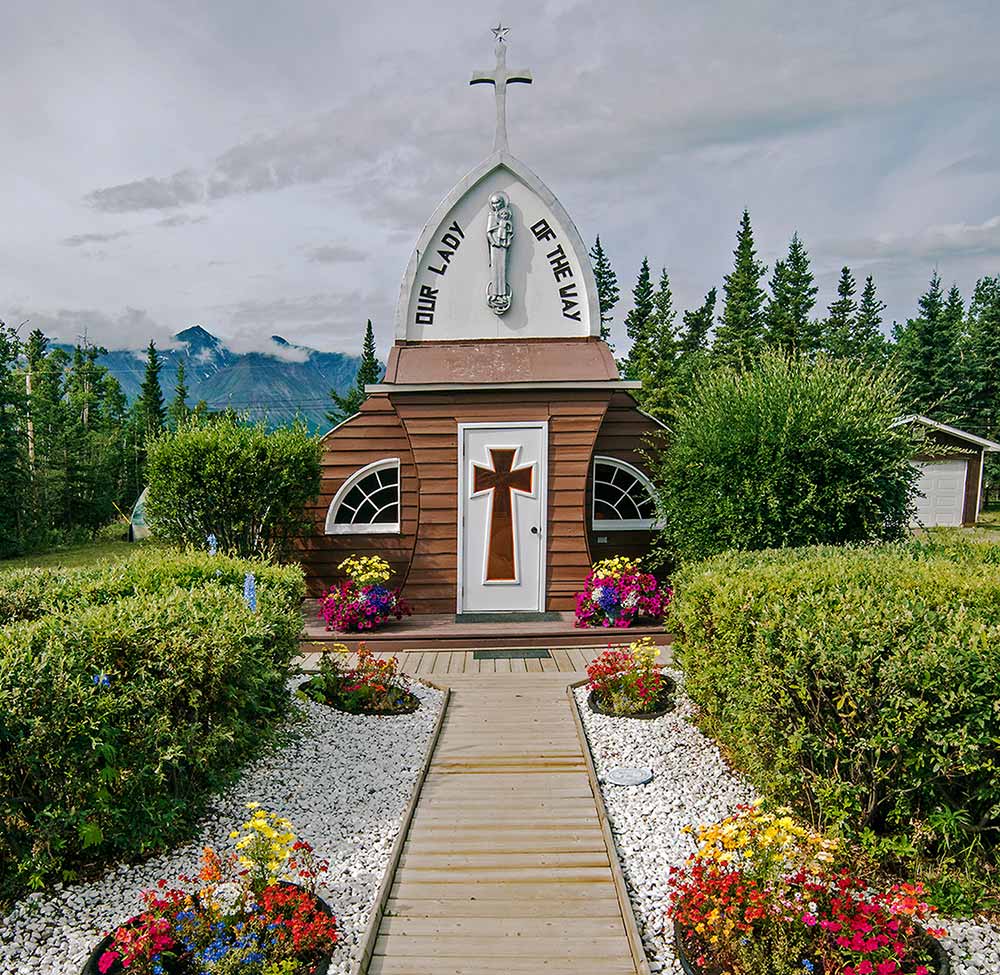 From Haines Junction, the Alaska Highway turns northwest, while the Haines Highway heads southeast. A proper Kluane road trip should include sections of both. 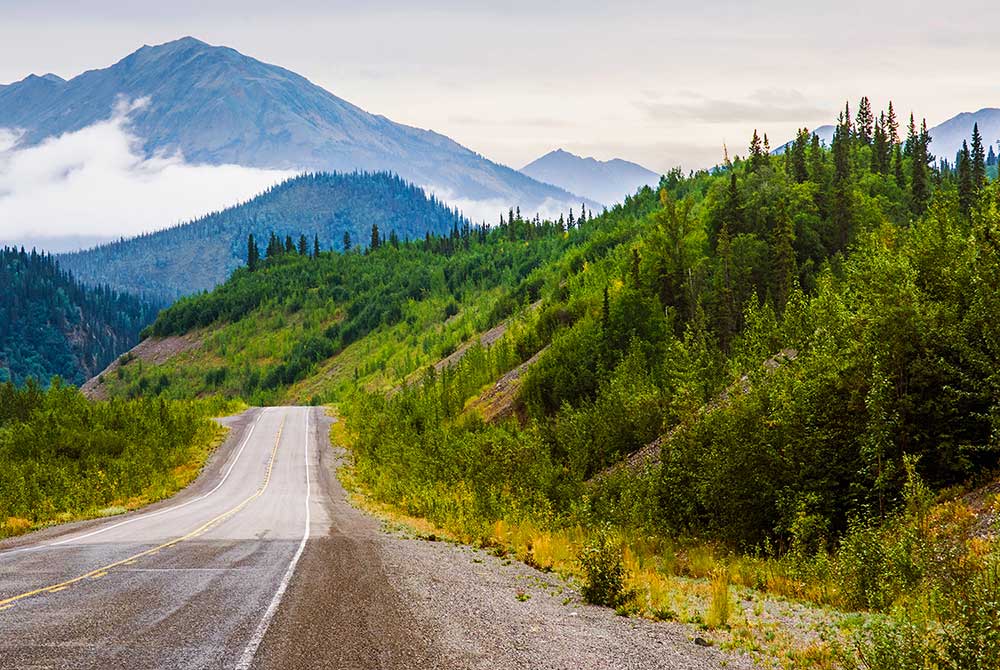 As the name suggests, the latter highway goes to Haines, Alaska, with the first 50 kms or so taking you past some of Kluane’s top highlights. Only 27 kms along, Kathleen Lake is the site of the only road-accessible campground inside the park. All other campgrounds and accommodation are along the park’s edge. 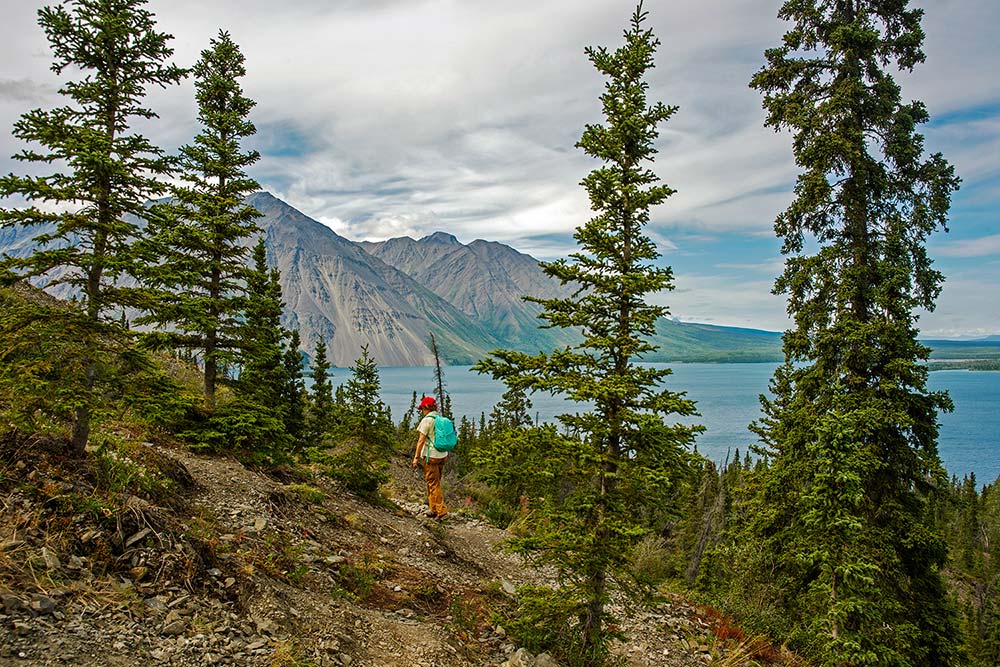 Hiking near Kathleen Lake, site of the only road-accessible campground inside Kluane National Park.
. . . . . . . 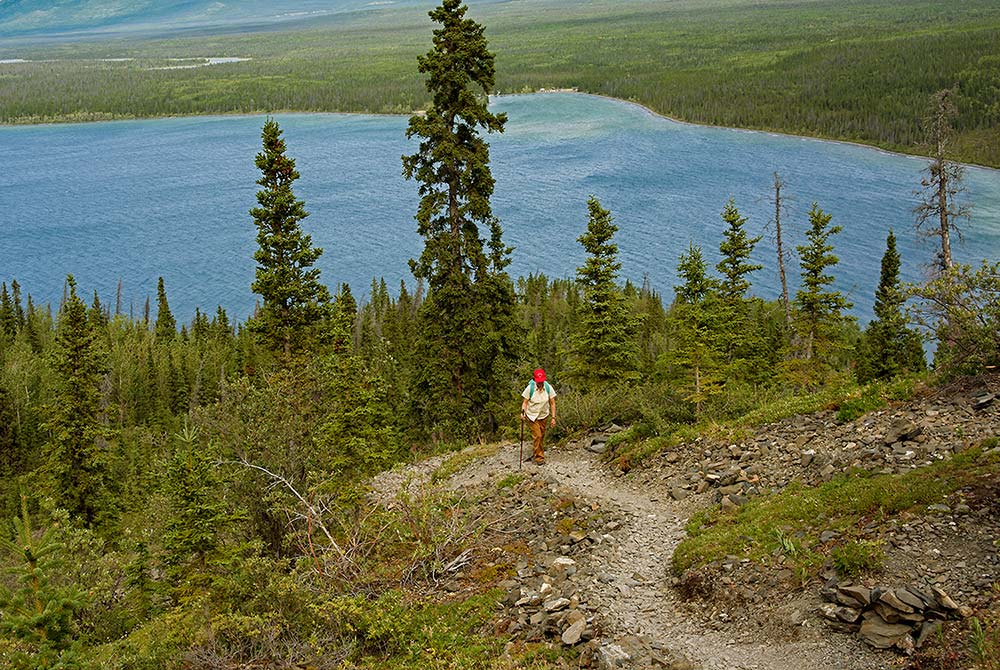 Kluane is famous for its spectacular hikes, including major multi-day excursions into remote backcountry. If you prefer something a bit more easy-going, there is a series of outstanding day hikes as well. Chief among these is the King’s Throne Hike, starting at Kathleen Lake and winding up the mountain with sweeping views of the lake and surrounding countryside. The trail gets increasingly steeper the farther you go, but the beauty of this hike is that you don’t have to go all the way to the end for spectacular views. 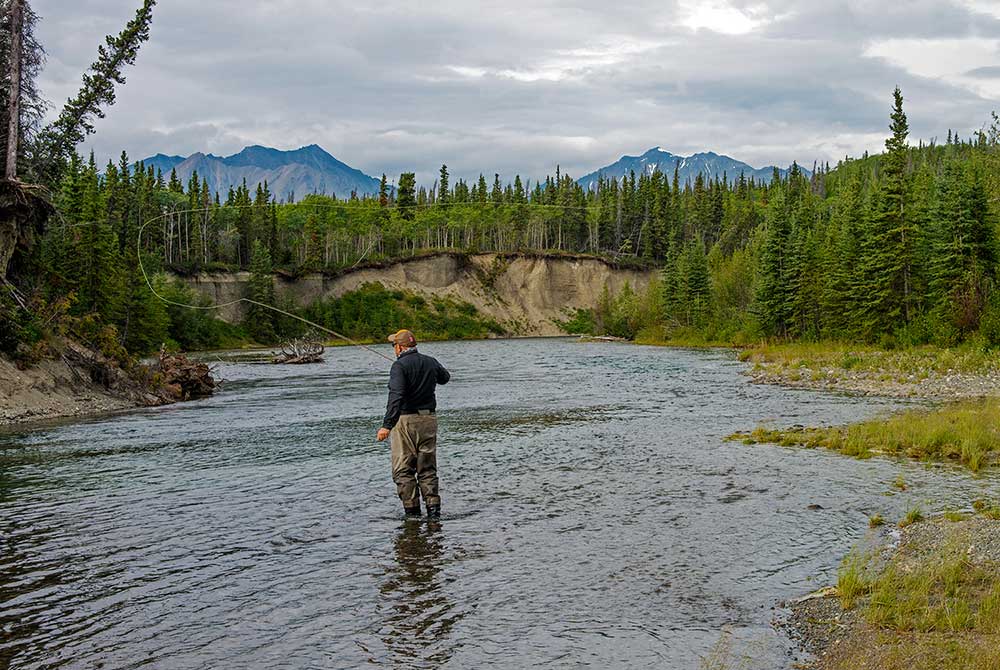 Just to the south, overlooking Dezadeash Lake, the short Rock Glacier Trail is another highlight. We start walking on boardwalk across marshland, then go through a section of forest before reaching the toe of the glacier, with jumbles of boulders and “rock waves” where the surface buckled into undulating ridges. 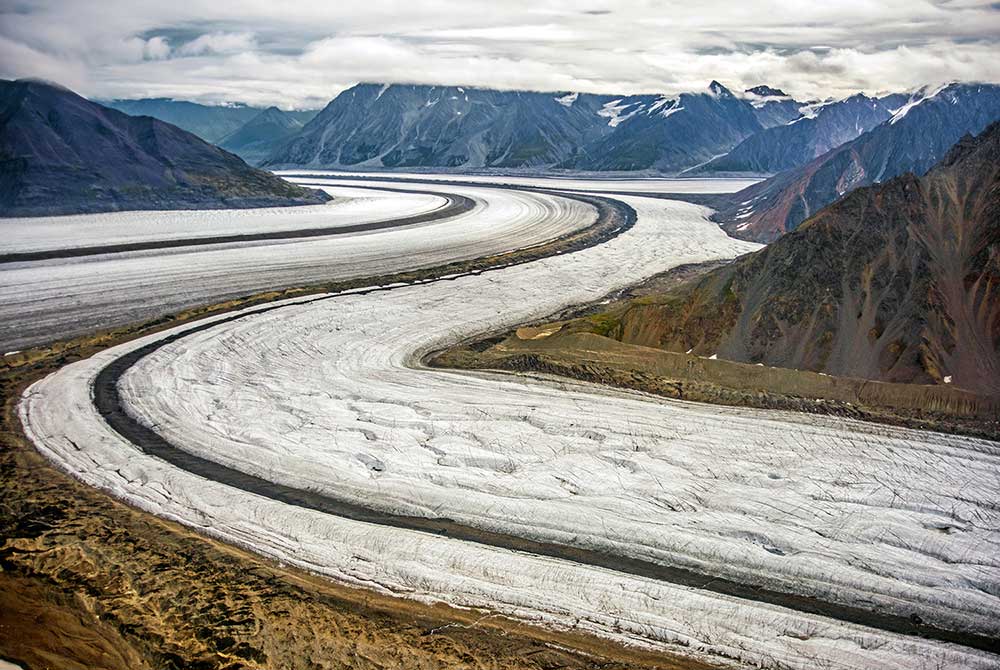 The nearby Dezadeash Campground is one of many territorial campgrounds we find along Yukon highways. These are some of the biggest bargains in Canada – only $12 per site and always in gorgeous locations. 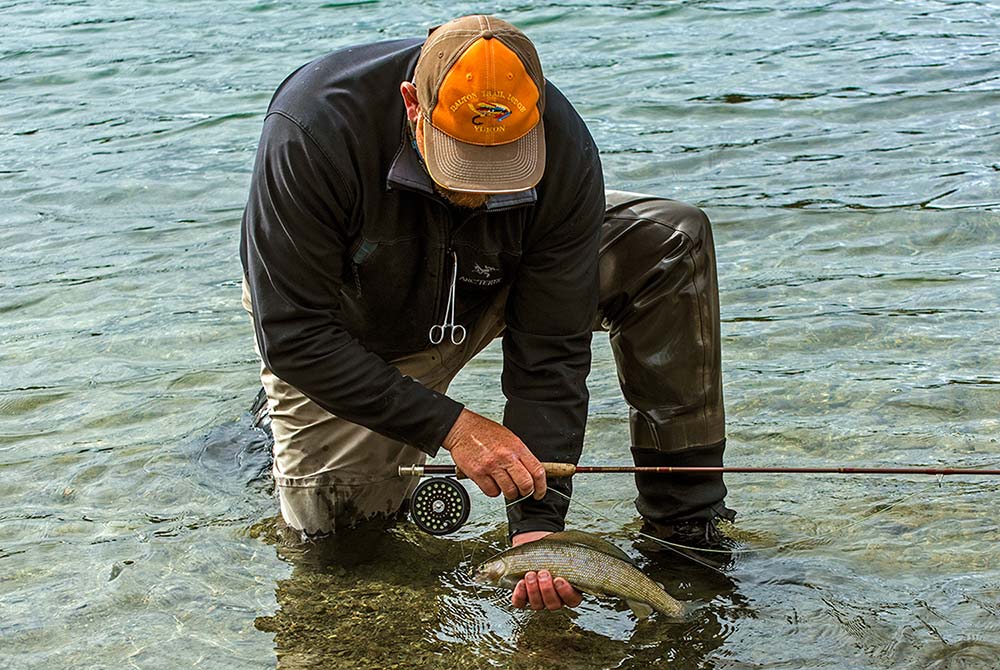 Prefer digs with a bit more comfort? Dezadeash Lake is also home to Dalton Trail Lodge, with a reputation for its international cuisine and accommodation in the main lodge or fully-equipped lakeside cabins. The lodge’s main focus is fishing, with guests going after enormous lake trout and pike, plus various types of salmon. Then there’s fly-fishing for rainbow trout and Arctic grayling on the shallow Kathleen River, accessed by the lodge’s jet boat that zips over the river’s many rapids. 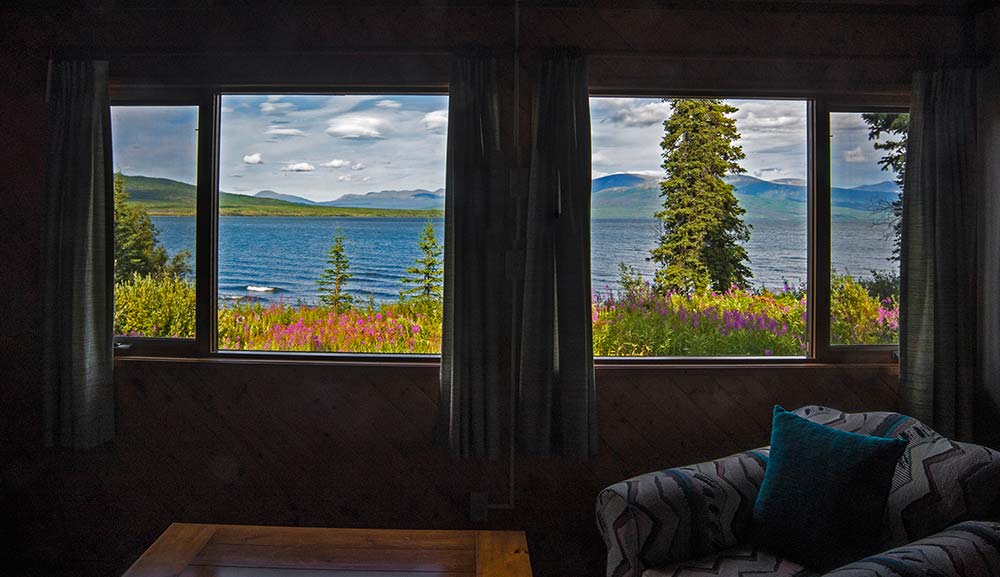 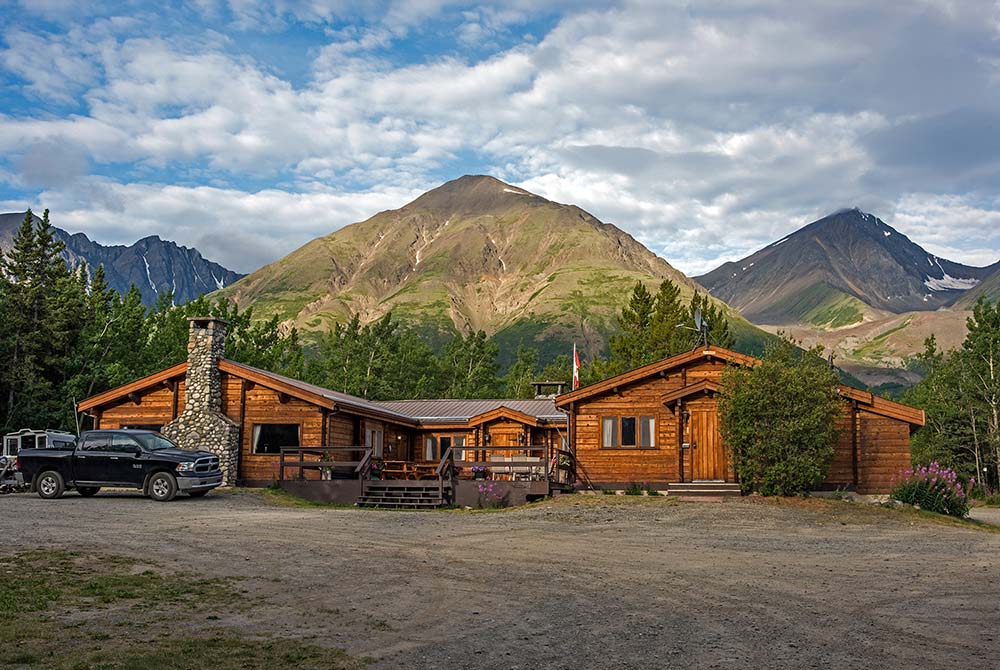 Heading northwest from Haines Junction, we come to the turn-off for the Alsek River Trail after about 10 km. While the trail is 52 km long and intended for overnight treks, you can also do a day hike by going partway along the mostly level trail. 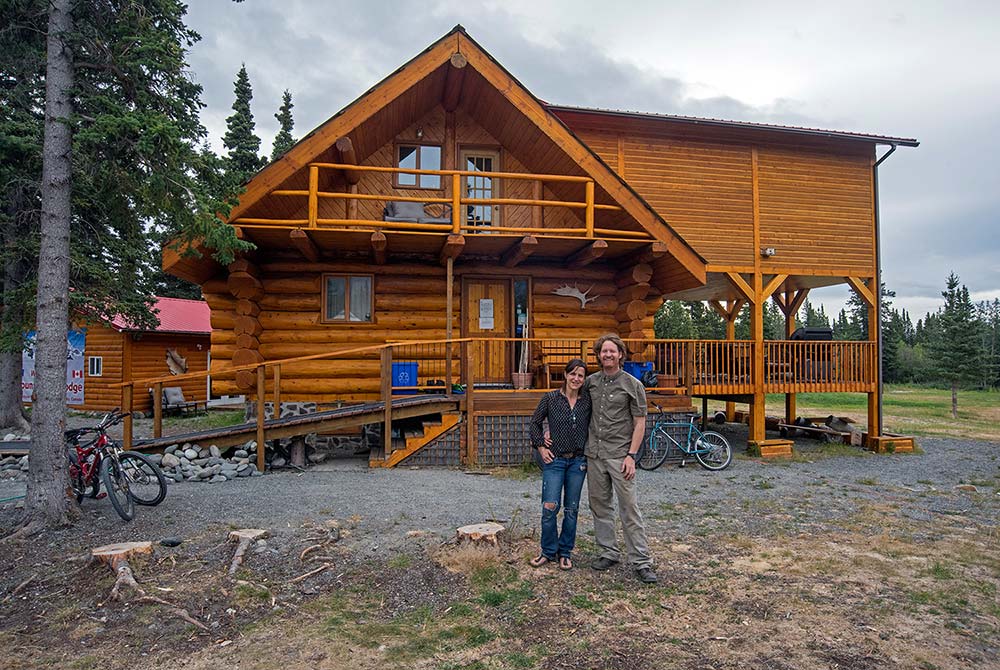 Mount Logan Lodge sits near the Alsek River Trail access. Since taking over the small lodge a couple of years ago, owners David and Roxanne Mason have transformed it into one of the most attractive places to stay in the region. Besides the impressive log-built main lodge, they have some imaginative alternate accommodations, including a yurt, a converted school bus, and the refurbished gold rush-era log cabin where we stayed. This isn’t a cabin made to look historic. It’s the real thing, used as a road house during the gold rush and thought to be the oldest building in the Haines Junction area. 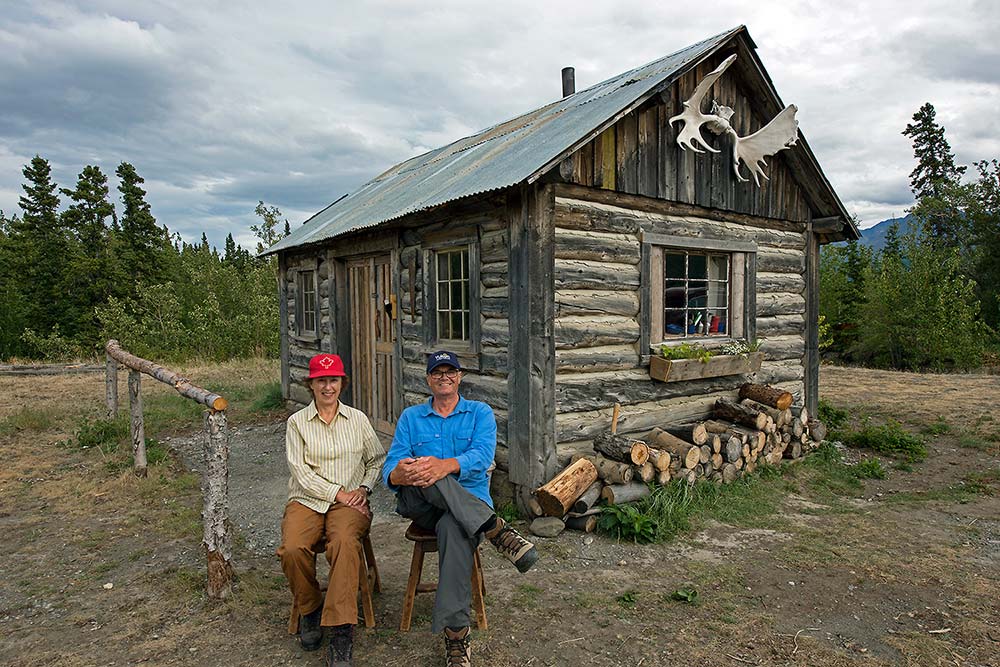 Breakfast is included, while other meals are optional, though highly recommended. You might think that fresh ingredients are hard to come by in this mountainous northern area, but the lodge’s greenhouse supplies a surprising amount of herbs and vegetables. A big advantage to staying and eating here is the easy-going, informal atmosphere where it feels as if you’re staying with friends rather than being in an impersonal hotel. 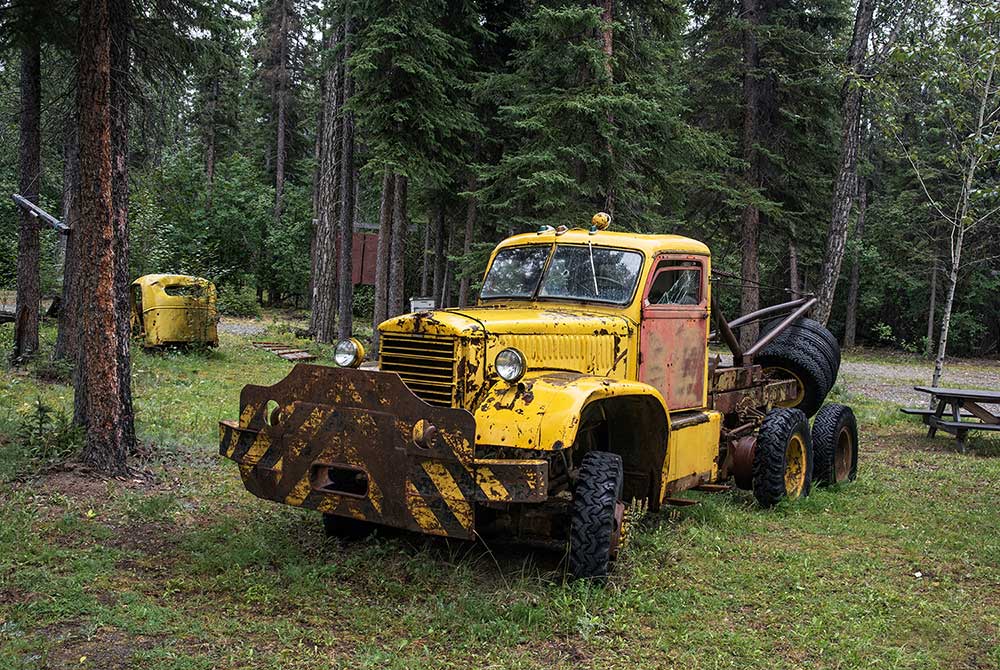 Old vehicles used in the building of the Alaska Highway, abandoned in the 1940s and now at Discovery Yukon Lodgings.
. . . . . . .

Kluane Lake is the largest lake in the park and site of another, though smaller, Parks Canada visitor centre. You can frequently see Dall Sheep wandering the rocky slopes in this area. Nearby, the short Soldier’s Summit Trail takes you up a hill to the spot where the Alaska Highway was officially opened in 1942. From the viewing platform, you look over the silt-laden Slims River which flows from the Kaskawulsh Glacier to Kluane Lake. 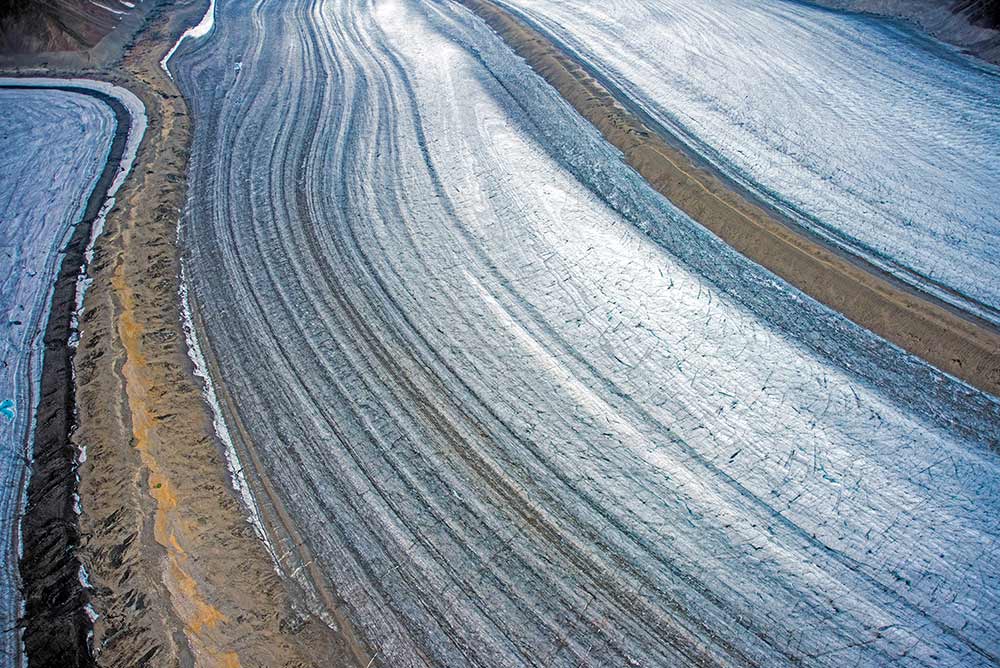 To really appreciate the grandeur of this land of ice, snow, and mountains, it’s best to take to the air. The flightseeing trip over the Kaskawulsh Glacier we did with Icefield Discovery was the undisputed highlight of our Kluane travels. We rose above the mouth of the Slims River bordering the lake and then seemed to enter another world as we soared above the massive glacier. Arms of the main glacier, plus side ones such as the Stairway Glacier flow together into an ice sheet six kilometres wide in places. It’s a surrealistic scene, like a giant abstract painting with sinuous curves of ice and rock. Most amazing was that the huge expanse of ice and mountains around us was still only a tiny part of the wild terrain that lies beyond. 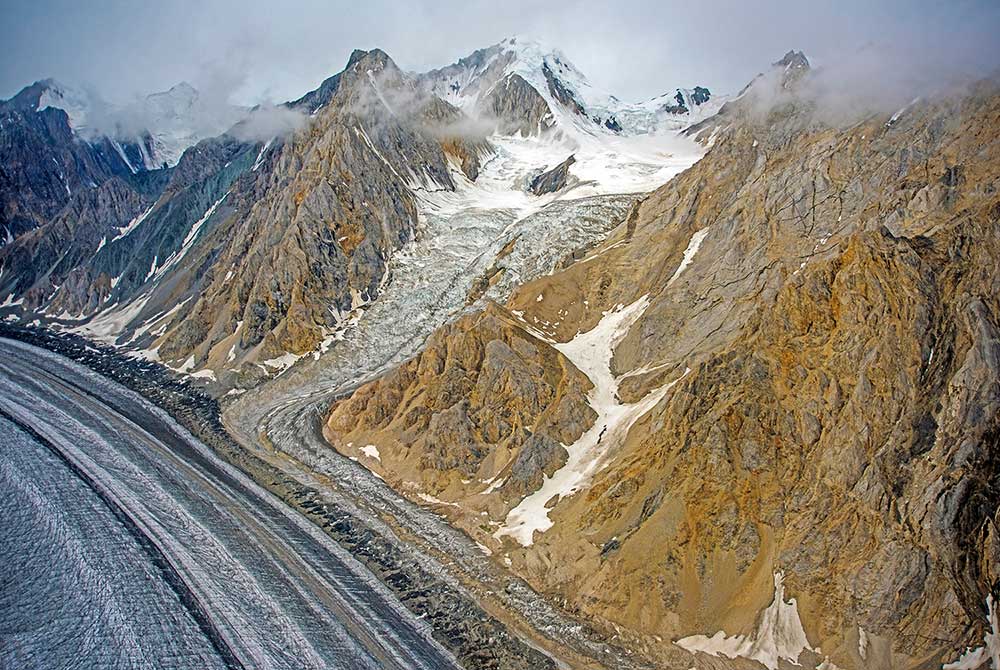 Farther northwest, along an especially scenic stretch of the Alaska Highway, we come to Discovery Yukon Lodgings. The site has a large RV park and campground, as well as small but well-designed log cabins. An innovated alternative is the Yukon wall tents – canvas frame tents with a wooden floor and beds. These appeal to travellers who want something basic and economical, or to campers who want a break from setting up their tents. You can order meals from the lodge, and even have them delivered to your accommodation. 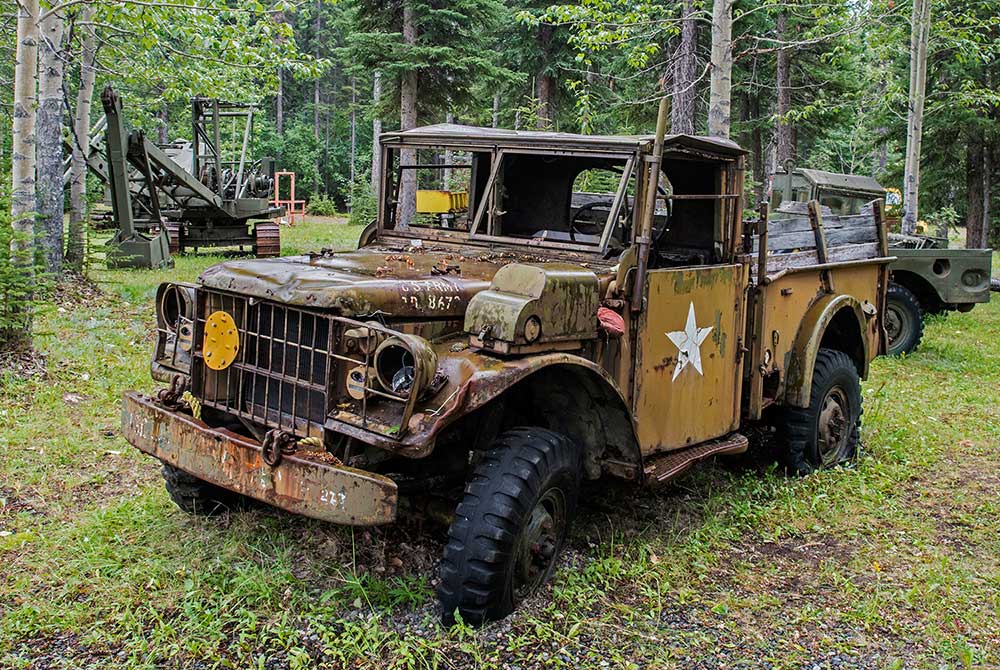 Old vehicles used in the building of the Alaska Highway – Discovery Yukon Lodgings.
. . . . . . .

A highlight of the property is the “vehicle graveyard”. This was originally the site of a base camp for the US military during the building of the Alaska Highway in 1942. Several old military and construction vehicles were abandoned from that era. The owners keep adding to the collection, providing a fascinating glimpse into the history of this famous highway. 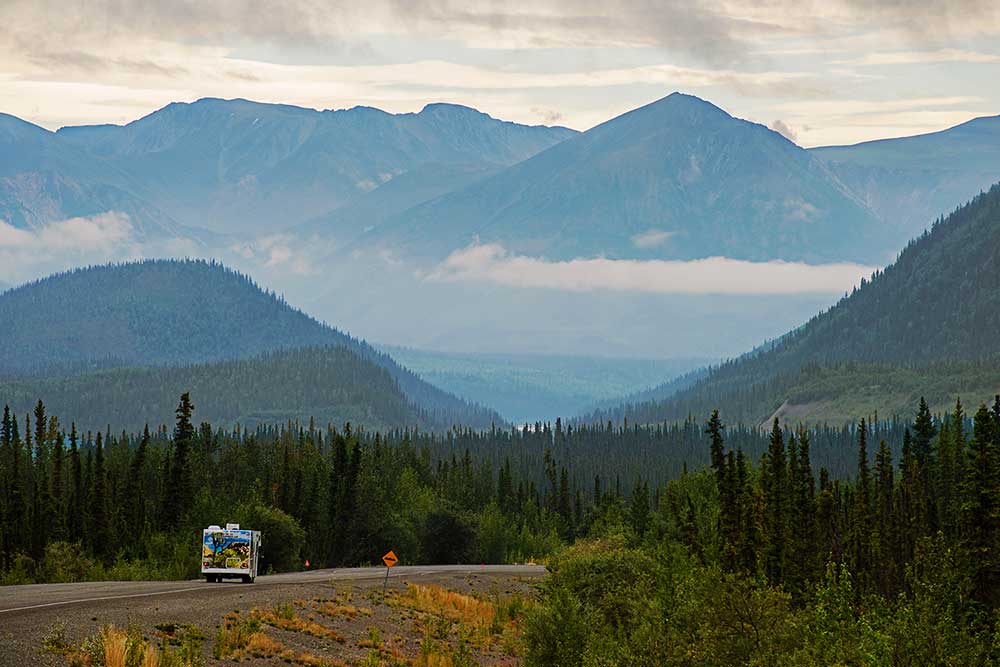 The Alaska Highway near the Kluane Wildlife Sanctuary in Canada’s Yukon Territory.
. . . . . . .