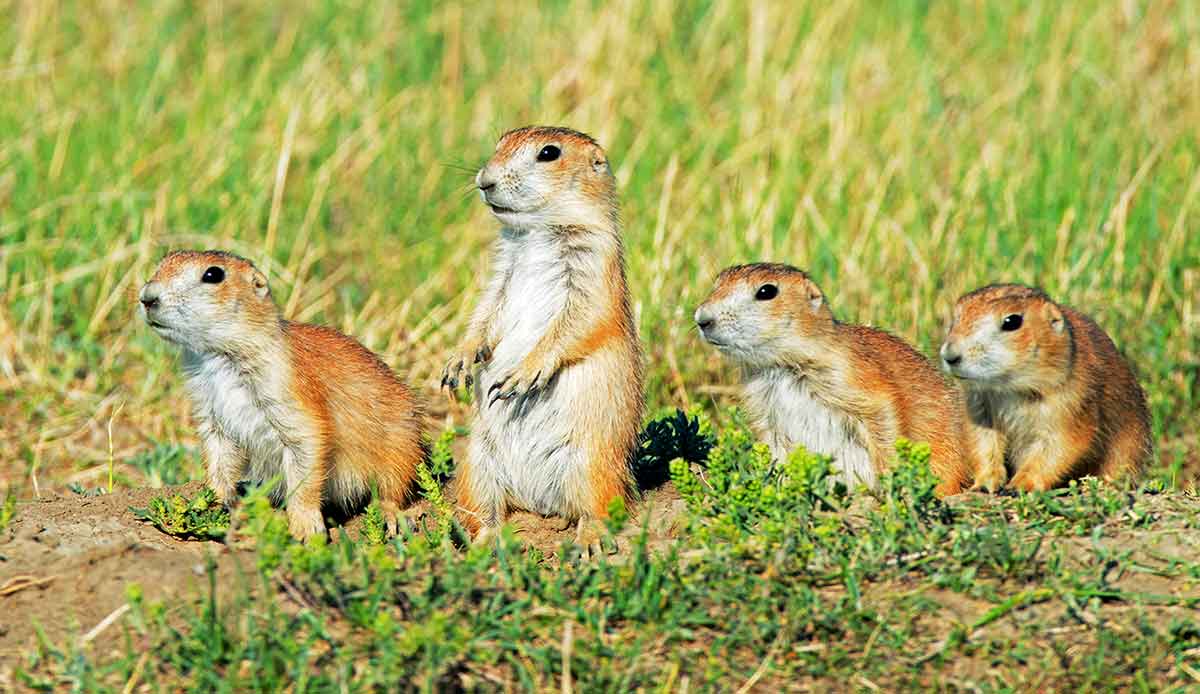 Saskatchewan’s Best Scenic Drives is the latest book from Robin & Arlene Karpan, freelance Canadian travel writers, photographers and book publishers based in Saskatoon, Saskatchewan. They specialize in nature and wildlife photography, wilderness hiking, canoeing, and travelling off the beaten track. Their extraordinary work has appeared in hundreds of publications around the world and we are happy to feature them here on Roadstories.ca
……. 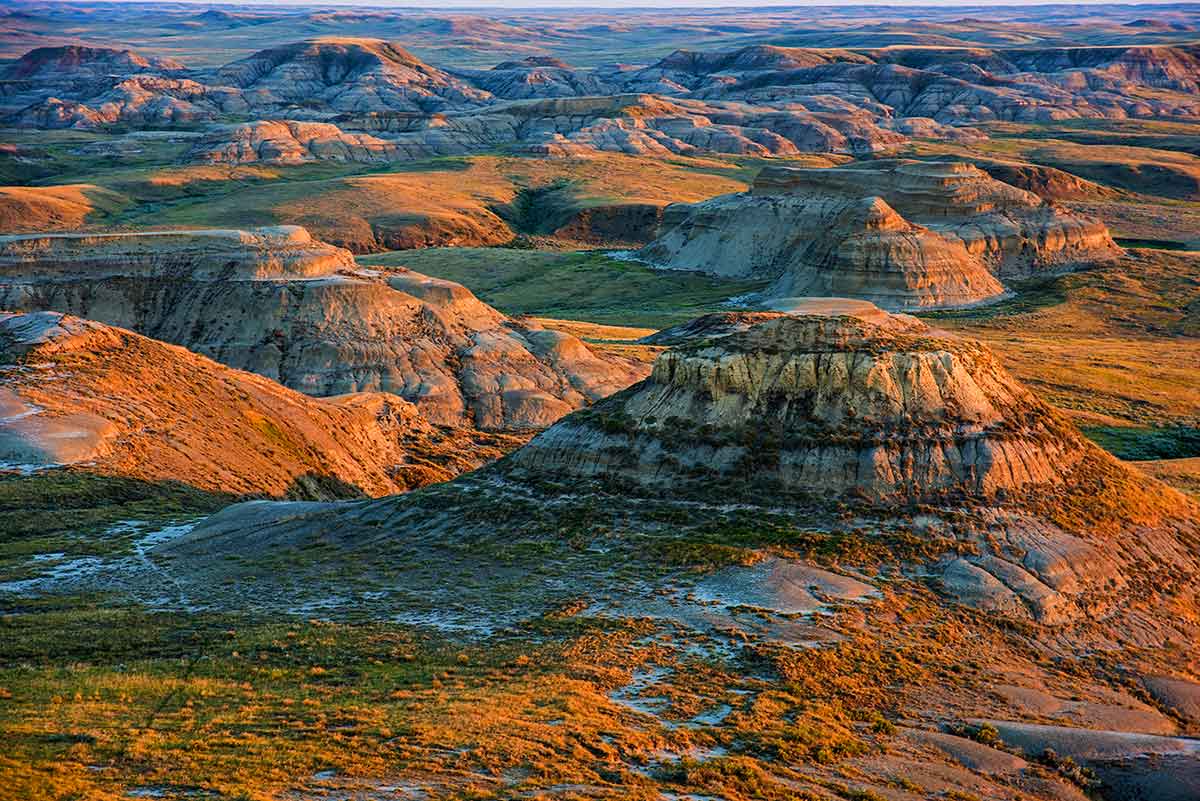 Saskatchewan has more roads than any other province. End to end, they would circle the equator four times. So the biggest problem in planning a road trip in Saskatchewan is deciding where to begin. Saskatchewan’s Best Scenic Drives is designed to guide visitors and residents alike on some of the province’s top driving routes. 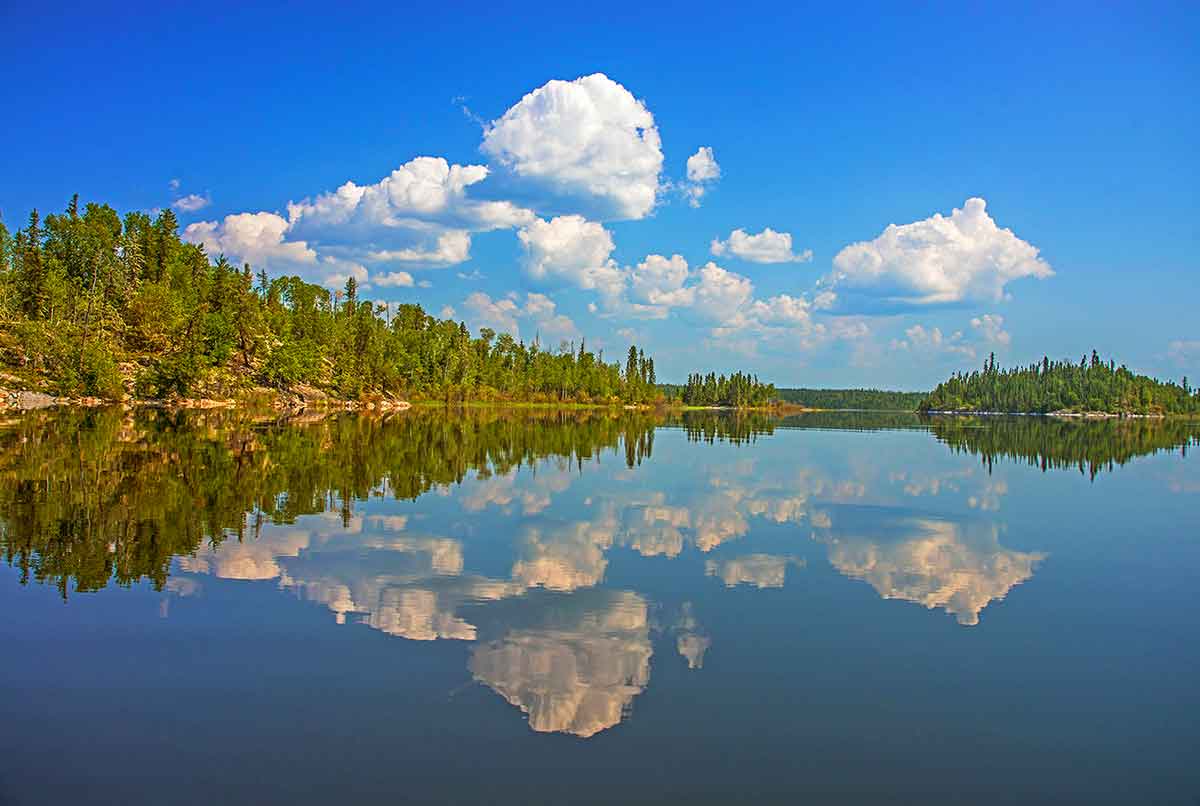 The geography of the northern half of Saskatchewan features many more lakes (and trees, for that matter) than the southern prairies and badlands.
. . . . . . .

The theme of the book is …

… getting off the main thoroughfares and following secondary highways, gravel roads, and even a few lonely dirt roads passable only in dry weather. We have mapped routes to take you through sweeping natural grasslands, lake-studded boreal forest, picturesque river valleys, some of Canada’s baddest badlands, Canada’s largest easily accessible sand dunes, little-known hideaways, and historic treasures. 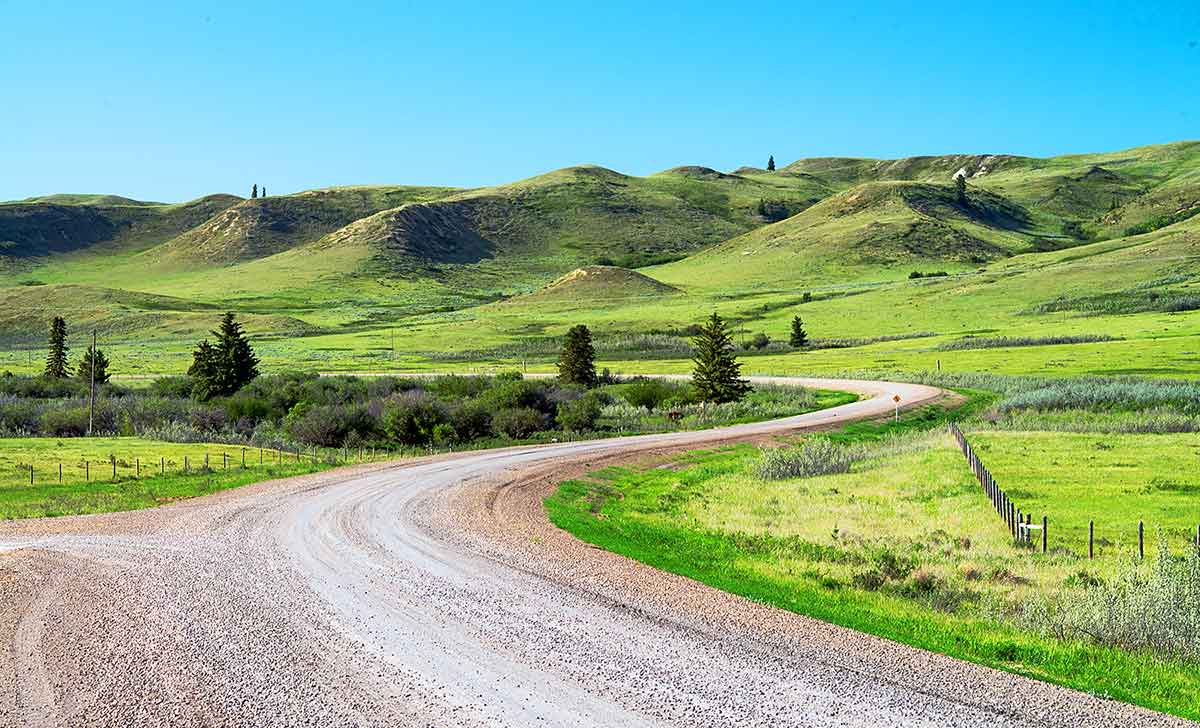 Brady Coulee Road north of Eastend, in the Cypress Hills region of Saskatchewan.
. . . . . . .

Some drives are alternate routes between familiar places. For example, the usual way to travel from Saskatoon to Regina is along Hwy #11, a quick and easy 2.5 hours on a divided highway. But if we take an only slightly longer route a bit to the west, we pass sand hills, one of the world’s largest earth-filled dams, southern Saskatchewan’s largest lake, impressive sand dunes, and three provincial parks offering everything from fishing, to camping, golfing, beaches, wildlife viewing, and hiking trails. 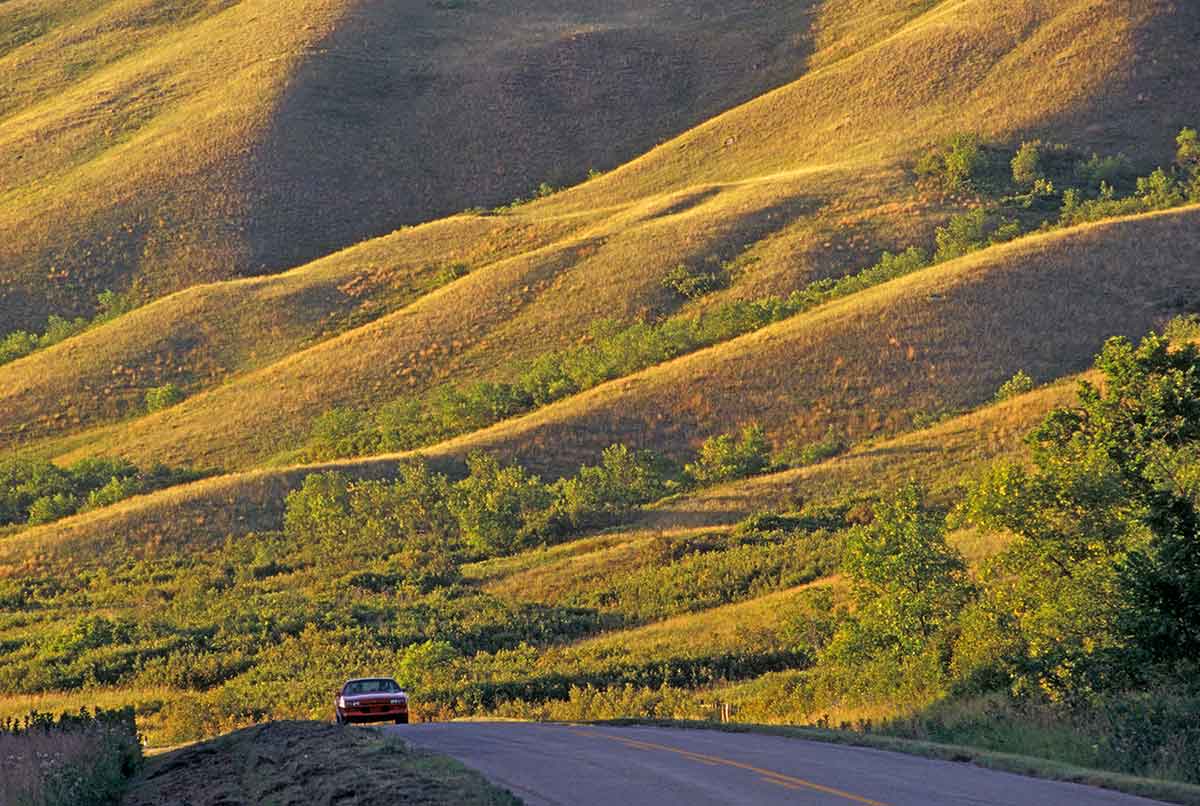 The most surprising route to many travellers is the drive through the Qu’Appelle Valley. Many people have seen bits and pieces of this picturesque valley – you cross it when travelling between Regina and Saskatoon, for example. But few are aware that it’s possible to drive over one-third of the way across Saskatchewan while staying entirely in the valley. It parallels the Trans Canada Highway, just to the south, but is a world away. The normally quiet river meanders across the broad flood plain, flanked by mostly grass-covered rolling hills on the north, and more forested slopes on the south. 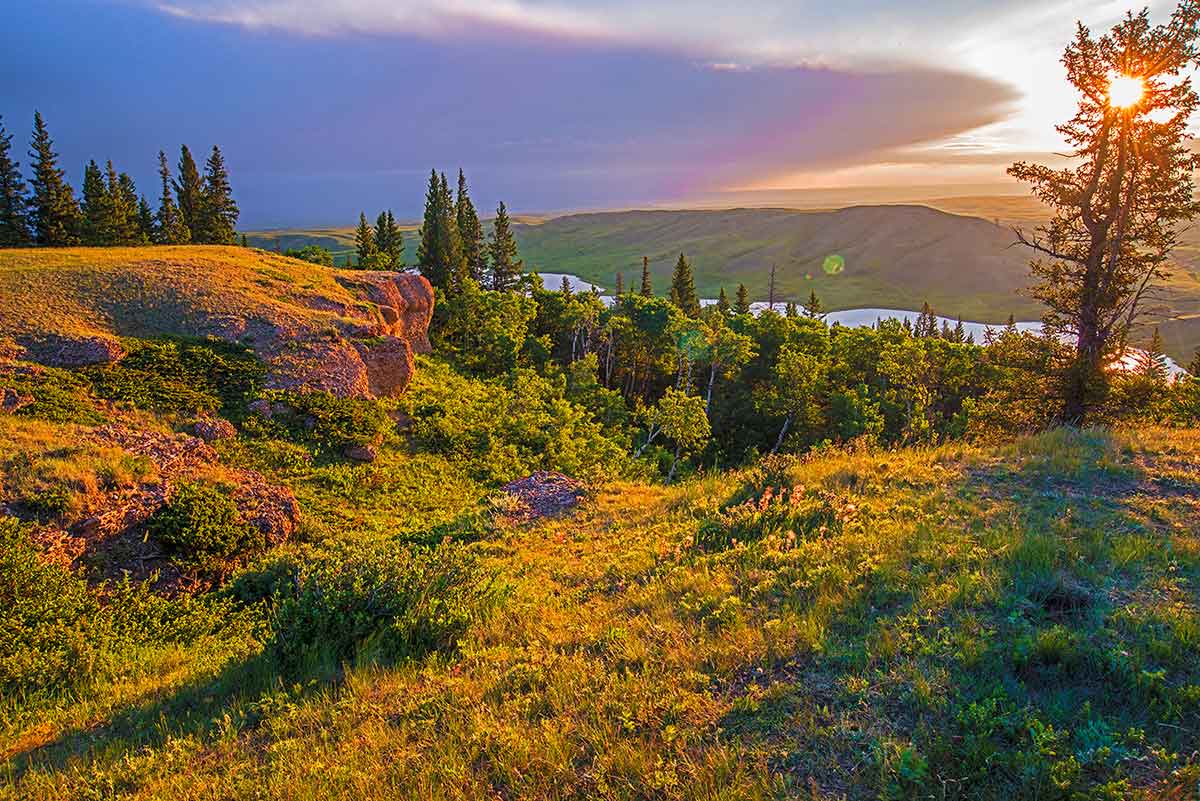 The only busy places in the Qu’Appelle Valley are where the river widens into lakes, attracting people to parks, beaches, and resort communities. Most of the way, the route follows lightly-travelled rural backroads where it’s not unusual to drive for an hour without meeting another vehicle. 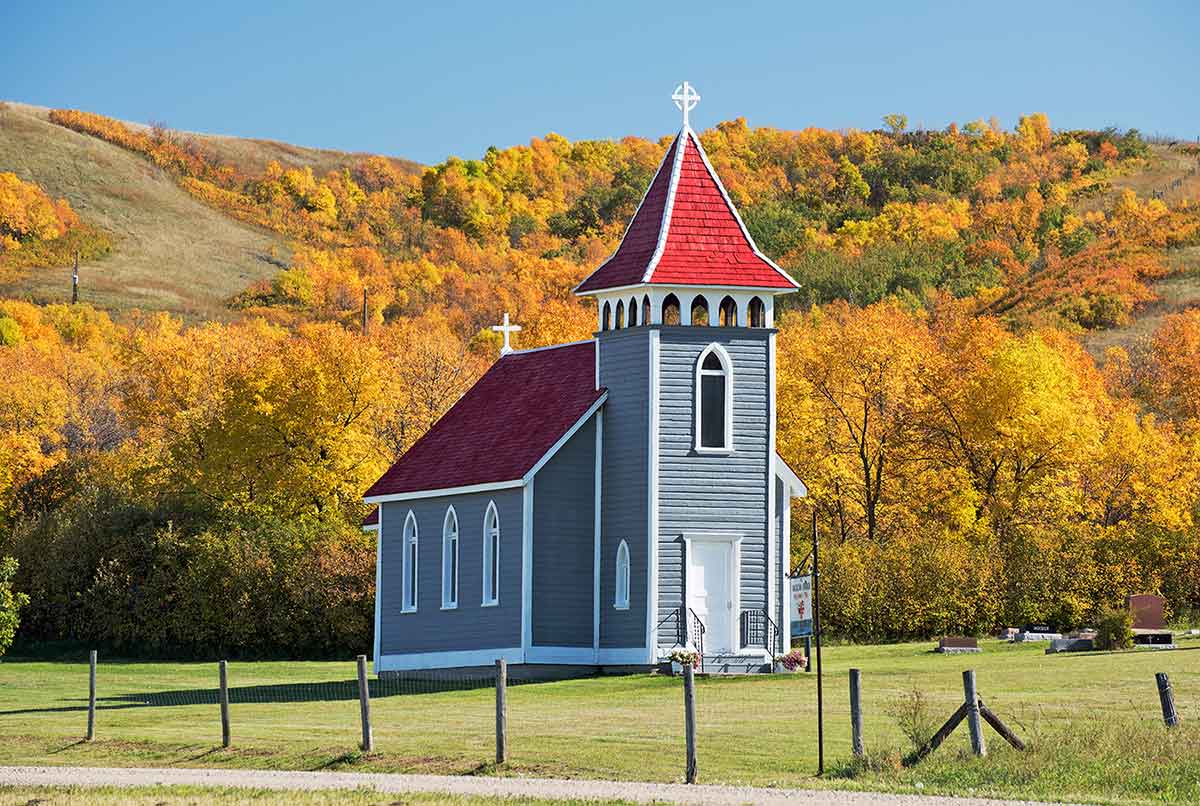 We can’t talk about scenic drives in Saskatchewan without including the Cypress Hills. Both the Centre and West Blocks of Cypress Hills Interprovincial Park have exceptional drives that are easily accessible, taking you to viewpoints over the escarpment, along Battle Creek Valley to historic Fort Walsh, or along the Gap Road across pastureland between the two blocks. 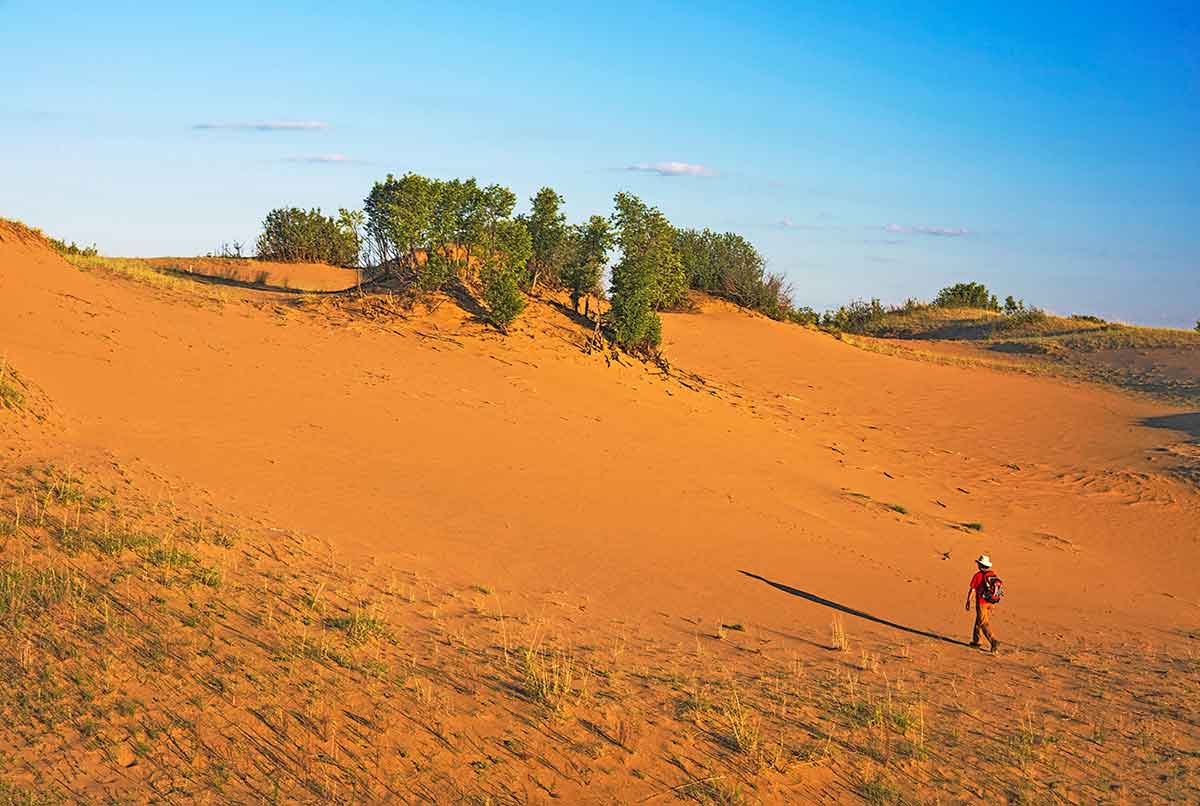 The great sand dunes in Douglas Provincial Park (named after the late Saskatchewan Premier Tommy Douglas) on the southeast end of Lake Diefenbaker (named after yet another Canadian politician).
. . . . . . .

While these may be familiar to regular visitors, the equally scenic possibilities outside the park are not well known. Chief among these are roads near the town of Eastend, aptly named for being at the east end of the Cypress Hills. Our favourite is the drive between Eastend and Ravenscrag which follows the Frenchman River Valley, its slopes lined with badland-like formations. Other nearby drives include Middle Bench Road taking you higher into the hills with panoramic views over the Frenchman River, or pleasant Brady Coulee Road following the valley formed by meandering Conglomerate Creek. 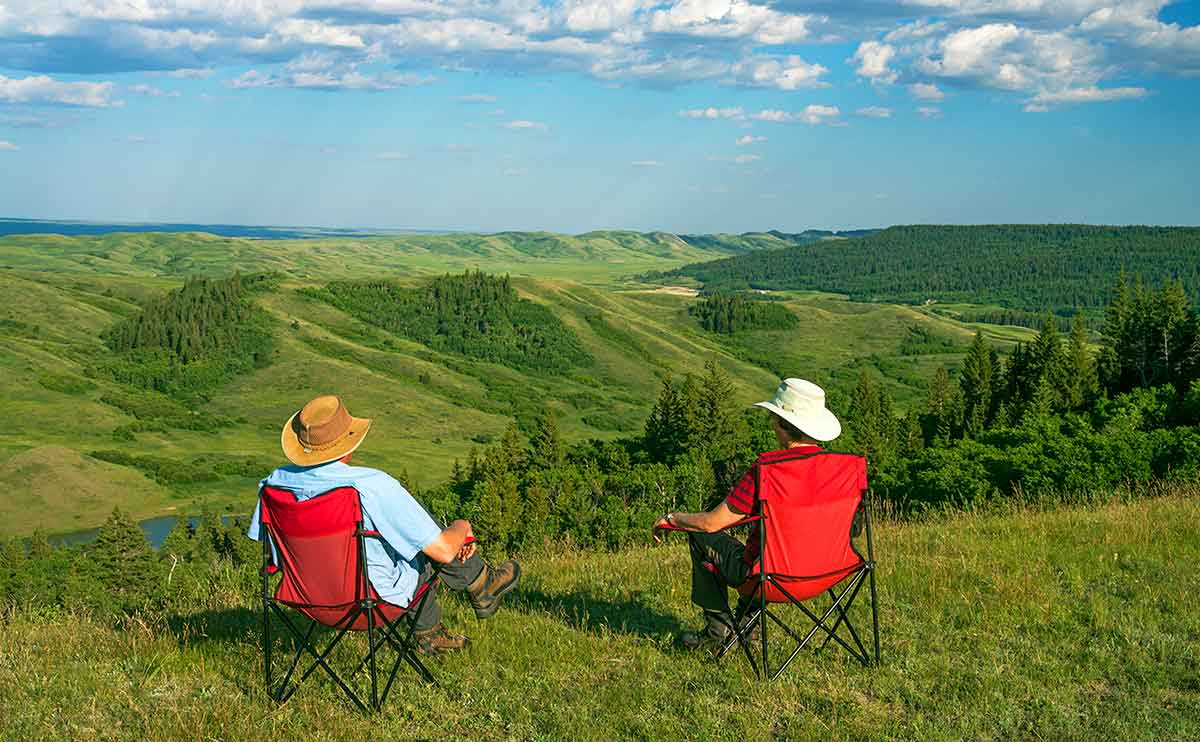 Some of the most breathtaking drives are in and around Grasslands National Park, a wild country of rugged buttes, hidden coulees, magnificent badlands, and wildlife galore. The West Block of the park has the most roads, including a loop trip through little-travelled parts of the backcountry. 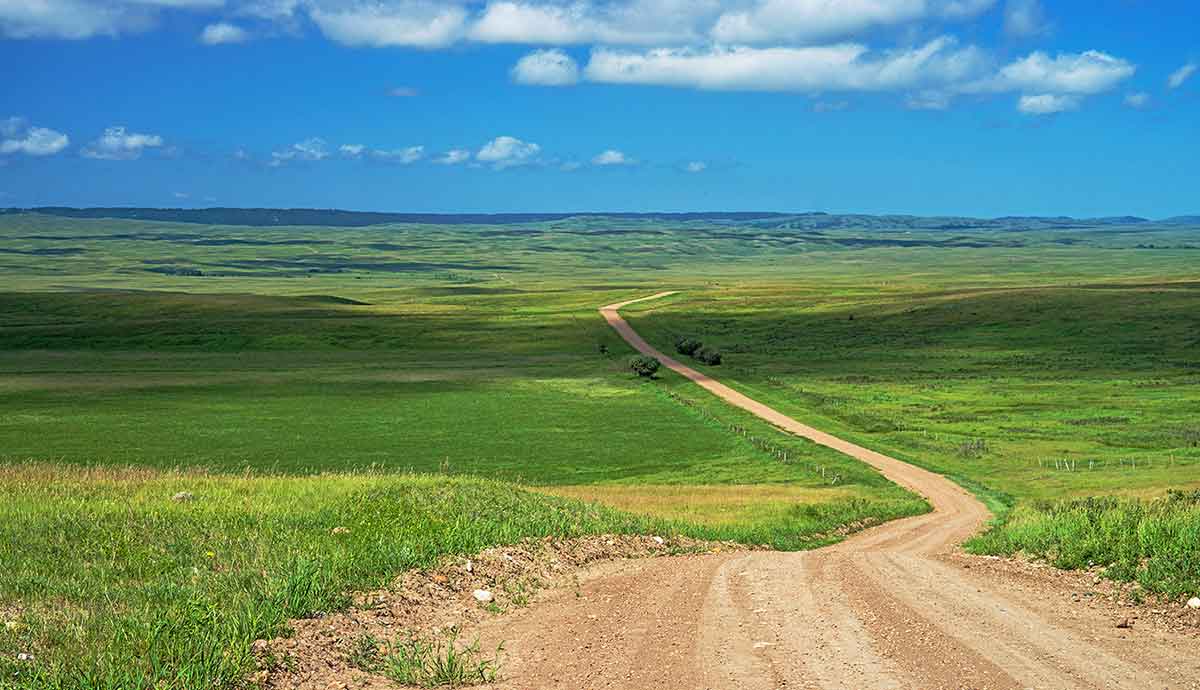 The Gap Road runs between the the Centre and West Blocks of Cypress Hills Interprovincial Park.
. . . . . . .

Grasslands’ West and East Blocks are not connected. Rather than simply taking the highway, we’ve mapped out interesting backroad routes between the two. If we had to pick the top scenic drive in the province, it would probably be the approach to the badlands lookout in the East Block. The approach road through farm and ranch land appears deceptively level, then suddenly the land to the north and west falls away. We travel along the valley rim bordering the expansive valley and look down on a spectacular landscape with weathered buttes, eroded gullies, steep hillsides, hoodoos, and wooded coulees. 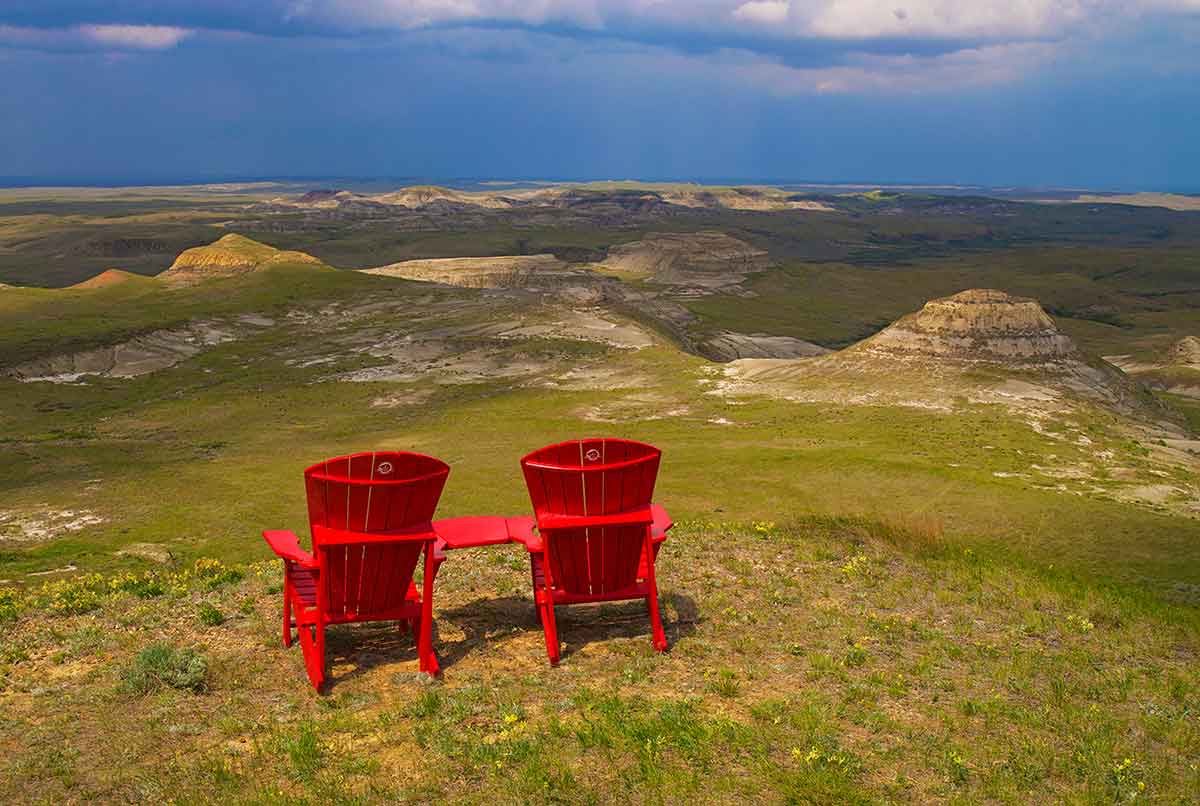 Great drives are not restricted to the park. In the Wood Mountain Uplands stretching east of Grasslands National Park, you could likely pick a backroad at random and not be disappointed. However, to get you started, we’ve mapped out some of our favourite routes between the park and Rockglen, one of the most beautifully situated towns in Saskatchewan. 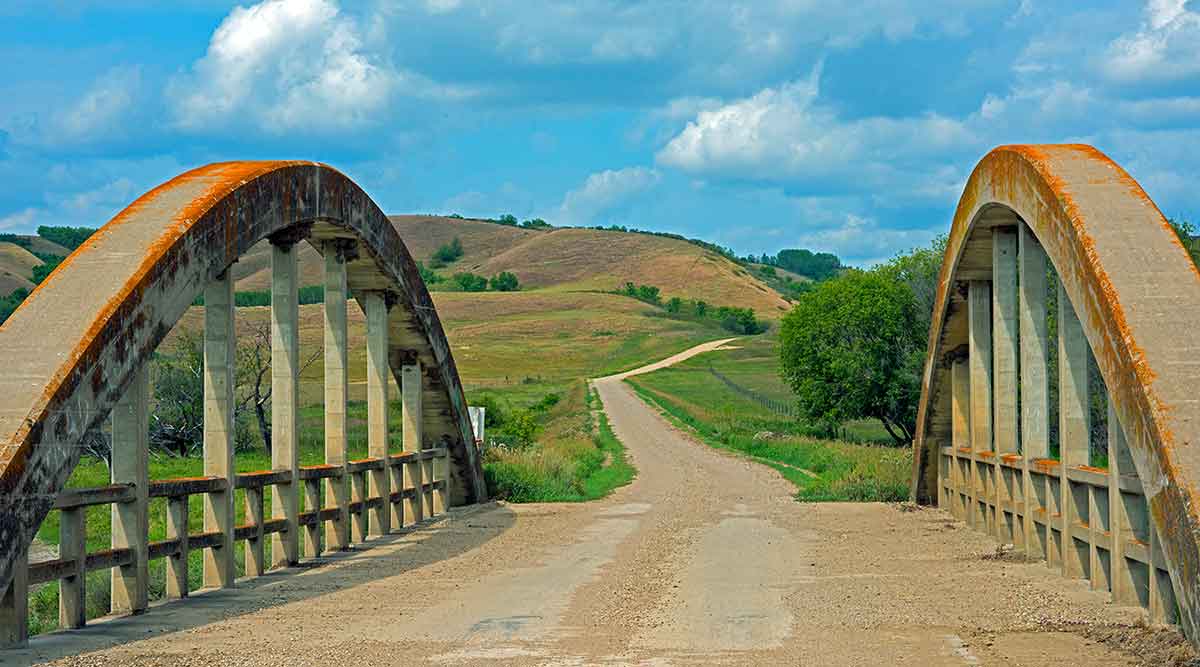 The Thickwood Hills, northeast of The Battlefords, are different again. A variety of routes run through farm land mixed with aspen forest, countless bird-rich wetlands, and large areas set aside as wildlife habitat. One route takes you to the mysterious Crooked Bush, where every branch and every trunk of every aspen tree is twisted and contorted. It’s like something out of a horror movie – not the kind of place you want to come at midnight during a full moon. Yet trees in neighbouring bushes grow normally. So what’s going on? 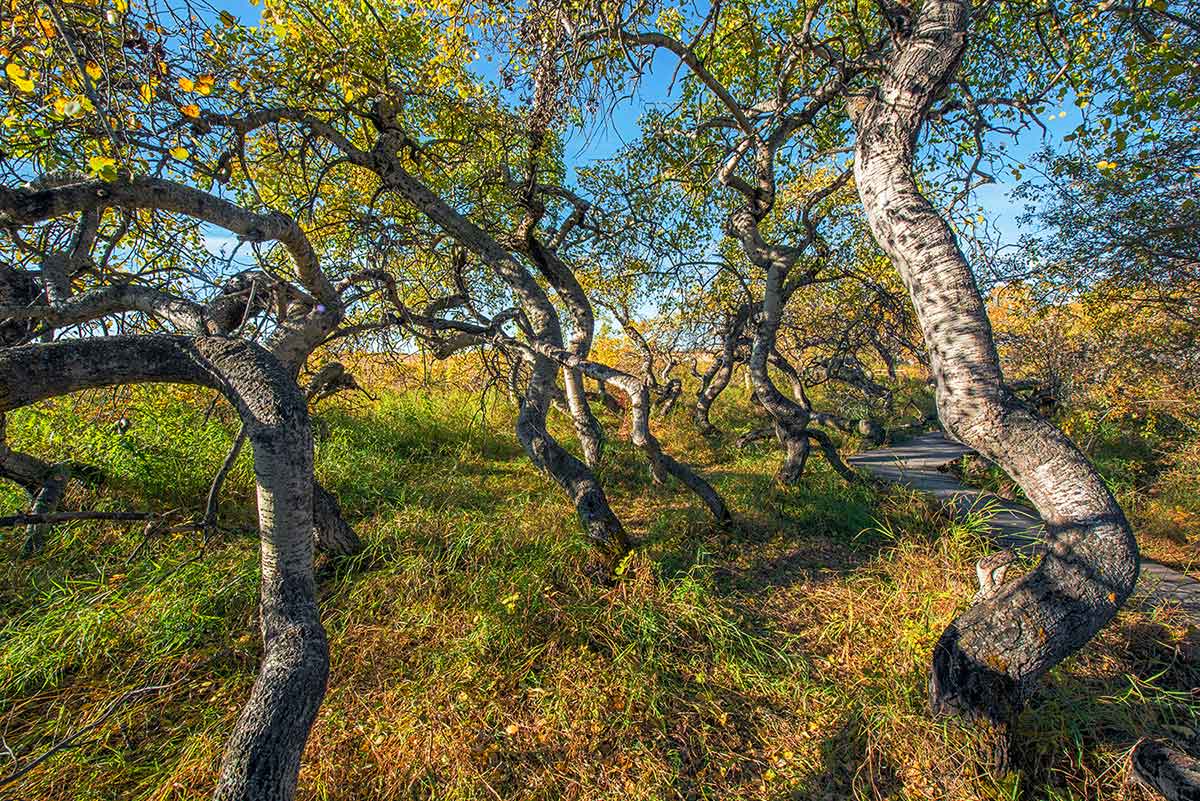 Someone suggested that they must have buried a lawyer here. Another theory has to do with a UFO sighting several years ago. One guy swears that he saw a flying saucer land here; the passengers got out, peed on the ground, then flew off again. The trees were never the same after that. This area also used to be notorious for its home brew, but that’s probably just a coincidence. Scientists have more mundane explanations involving genetic mutations and such. But we wonder what caused the mutation in the first place. We like to think that it was spaceman pee. 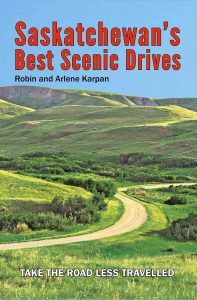 Many other driving routes are outlined in the book. Another circles massive Lake Diefenbaker, home to several parks and some of the most dramatic landforms in the province. Take a drive around the Great Sand Hills and visit the most accessible major sand dunes in Canada. Drive past historic Mounted Police forts, or battle sites from the tumultuous days of the 1885 conflict. Head north through Meadow Lake Provincial Park, home to the famous Boreal Trail – a beautiful 120-kilometre hike through forested lakelands. Explore Grey Owl’s old stomping grounds around Prince Albert National Park, see the striking white cliffs and sand pillars along the Nipekamew River, or find whitewater heaven on the mighty Churchill River.

Saskatchewan’s Best Scenic Drives is available at bookstores and gift shops throughout Saskatchewan, but if you’re not lucky enough to live in that province you can order a copy directly from Parkland Publishing (www.parklandpublishing.com).

Check out Robin & Arlene Karpan’s post about Jasper National Park in the Fall and also the cute wildlife statues in Leader, Saskatchewan. 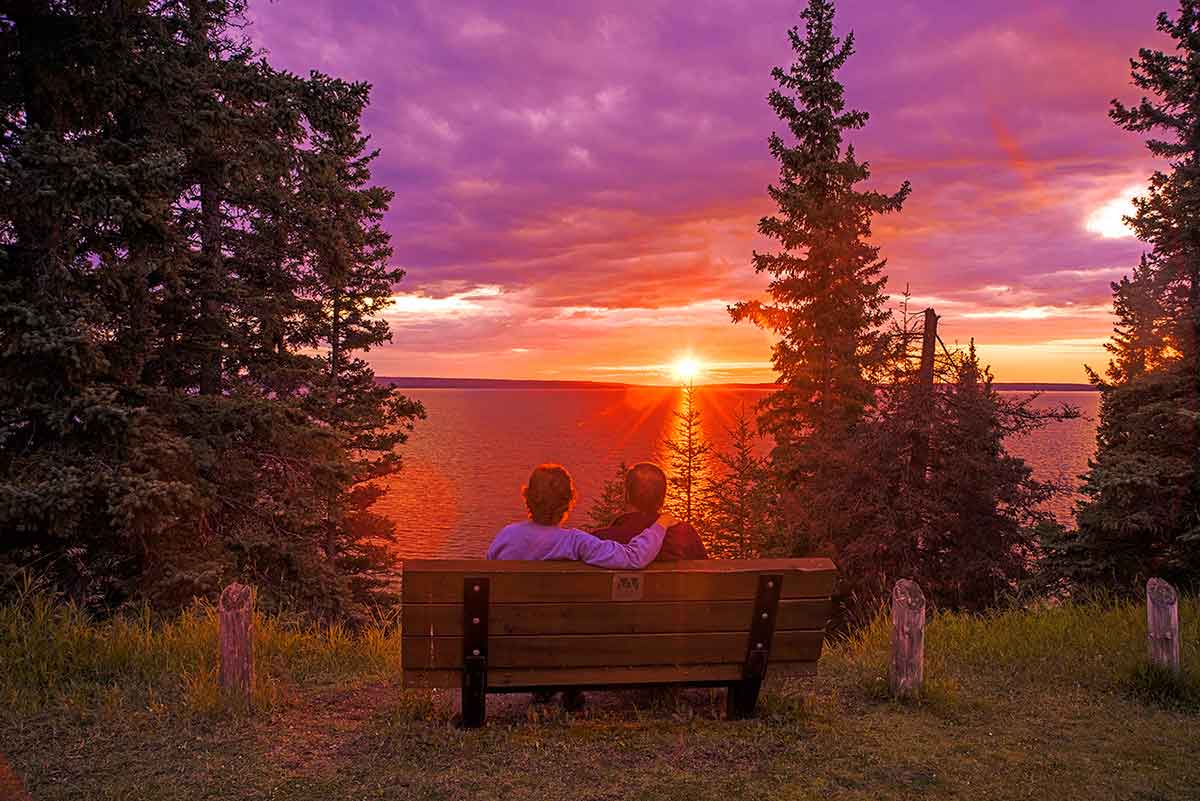