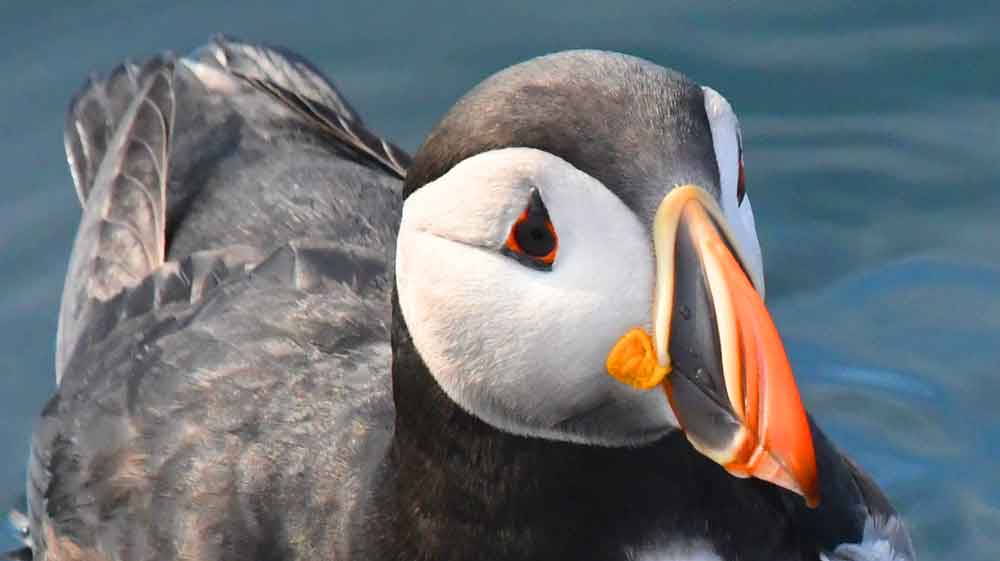 Getting stranded on a small, isolated, windswept, bird-infested island surrounded by Minke whales, dolphins and seals on the St. Lawrence River’s north shore, might appear at first glance to be the setting for a horror film – especially when my living quarters was a century-old, working lighthouse station. In reality, staying on the Ile aux Perroquets in Quebec Maritime’s distinctive and spectacular Mingan Archipelago National Park Reserve was more a romance – I fell in love with the isle and its dramatic setting. Besides, the boat that dropped me off did, as promised, come back the next day to pick me up. Not that I was ready to leave. 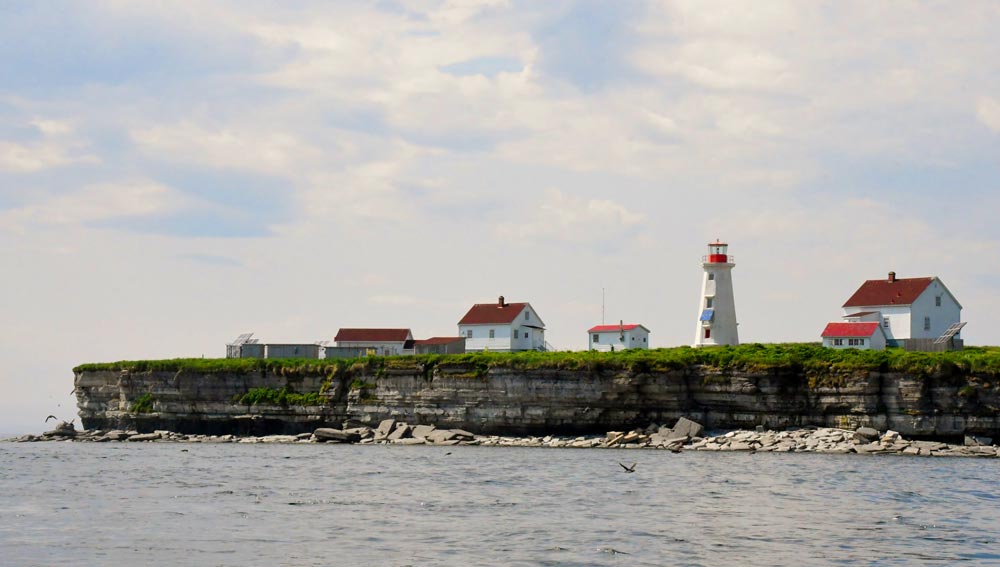 You can book an overnight stay at the lighthouse station on the Île aux Perroquets.
– All photos by Jamie Ross
. . . . . . .

Along the North Shore of the Gulf of St. Lawrence is a remarkably beautiful scattering of nearly a thousand islands, granitic islets and reefs sprinkled along a narrow swath 150 kilometres east to west. Founded by Parks Canada in 1984, this relatively small and little known park receives roughly 35,000 guests each year, and although the reserve is restricted to the islands themselves, it becomes quite obvious when visiting that it is the sea that shapes everything; sea life, birdlife, wildlife, vegetation, rock formations, the climate, and even the visitor’s experience itself. 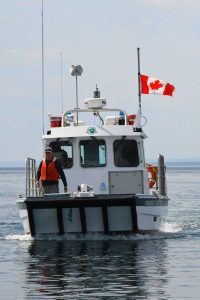 The park reserve is open from June until early September and is only accessible by boat. This Parks Canada vessel is uniquely built with an angled front for docking on beaches.
. . . . . . .

Two days earlier, dressed in a warm survival floatation suit, I jumped aboard a Parks Canada vessel, uniquely built with a hinged angled front for docking on beaches. We set out from the small marina at Havre-Saint-Pierre to explore some of the islands. The Mingan Archipelago is best known for its eerie assemblage of limestone monoliths, the largest collection of its kind in Canada. Along the shores of Mingan’s larger islands they appear as sentries, tottering sand castles or gigantic mythical beasts, carved by nature’s forces and ranging from a few metres to more than 20 metres in height. 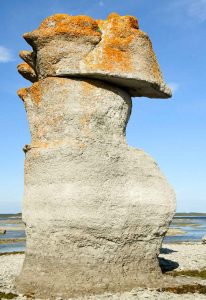 The Mingan Archipelago is best known for its eerie assemblage of limestone monoliths.
. . . . . . .

Our first destination is Île Niapiskau. I follow a boardwalk into the island’s damp interior forest to find, hidden amongst the lichen-laden trees, berries and mosses, some of these imposing sea-sculpted monuments. Their appearance inland is evidence that a shallow sea once covered today’s St. Lawrence Lowlands region. The other islands in the chain are equally as intriguing and spectacular; Île du Fantôme, Grosse Île au Marteau, Grande Île, Île Quarry, Île Nue de Mingan and Petite Île au Marteau. It is easy to while away a day or two exploring the wild shorelines, boreal forests and peat moss barrens. I venture onto the rocky flats at low tide, walking on the seemingly endless rocky and sandy beaches, while marvelling at the unique and hardy seashore flora and the diversity of marine organisms that make their home in the tidal pools. 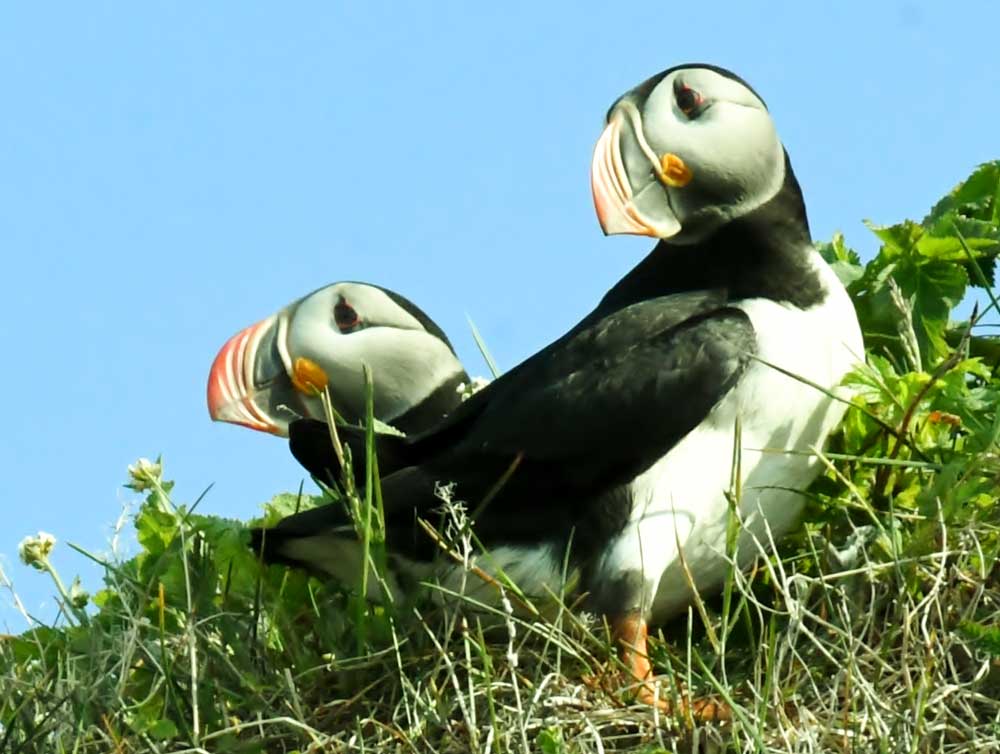 With its clown-like appearance, the puffin or “sea parrot” prefers to nest on the smallest islands of the archipelago. The birds arrive in the islands in April and remain until September.
. . . . . . .

On Petite Île au Marteau there are old lighthouse buildings and a schoolhouse – now a museum where you can discover local history and culture. Hiking on the larger central islands takes you through a diversity of ecosystems; coniferous forests, bogs, barrens, small lakes, salt marshes, seashores and cliff habitats. The Île Nue de Mingan is a treeless island with fascinating Arctic and subarctic vegetation. And the magnificent monoliths are everywhere, on most islands – on the tidal flats and in the depth of the forests.

In addition to the otherworldly landscape, the Mingan Archipelago is home to large colonies of astonishing birds, including the magnificent Atlantic puffin and the Razorbill. During breeding season the park shelters thousands of marine birds, including passerines, birds of prey, Red Knot rufa, cormorants, kittiwakes and guillemots. It is also home to the largest concentrations of terns and common eiders in the Gulf of St. Lawrence. Minke whales, dolphins and seals can often be seen, drawn to these cold waters teeming with plankton and fish. 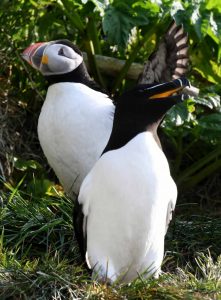 Puffins and razorbills welcome visitors to the Île aux Perroquets.
. . . . . . .

One can visit the islands on day trips or afternoon tours, but I would recommend getting adventurous and spending a few days. There are 42 campsites available on the islands, and the life and atmosphere of both sea and shore transforms itself into the evening hours and through the eerie darkness of the night. My accommodation for one night is a Parks Canada o’TENTik on the Île Quarry. The comfortable tented structure is just off the stone beach. I enjoy a barbecue dinner and afterwards sit out under a magnificent starry sky beside an ocean-side bonfire. 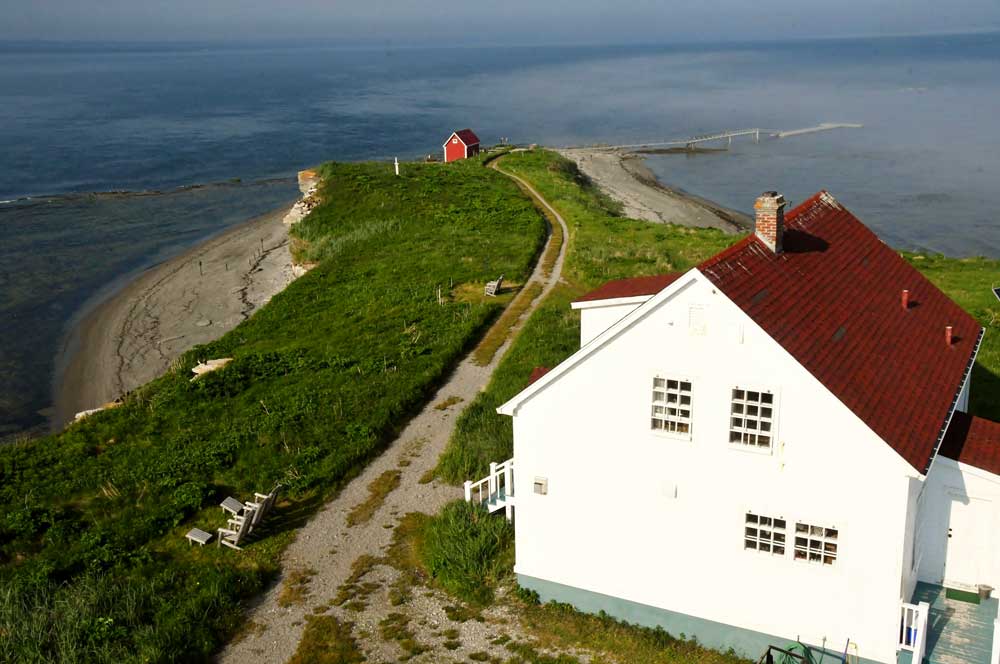 Then, on the second night of my visit, I enjoyed the unique island experience overnighting at the lighthouse station on the Île aux Perroquets. The lighthouse B&B can be booked and accessed by regular charter boats or, and this is my plan for a return visit, by sea kayak on a multi-day adventure. The island is charming. As my luggage is off-loaded and taken ahead to my room, puffins and razorbills fly by to welcome me. Local treats and cocktails await our small group’s arrival in a quaint outbuilding called the “Hen House.” 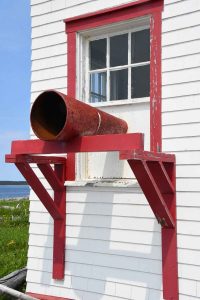 The old foghorn was important for warning boats and keeping them clear of the forbidding rocky islands and ragged shoals of the archipelago.
. . . . . . .

Afterwards I explore the foghorn building, taking in the exhibits of the lighthouse’s history and the lives of those who cared for it. I climb to the top of the lighthouse for the awesome views, imagining how it would have been to live here, trapped year-round by sea, winter ice and duty. For almost a century six different lighthouse keepers were isolated here, with their families or a helper, tasked with keeping boats clear of the forbidding rocky islands and ragged shoals of the archipelago. School masters would drop around to tutor the kids, boats would bring supplies, mail and gossip, and the colony of birds would provide conversation. It would have been a very small and lonely island. 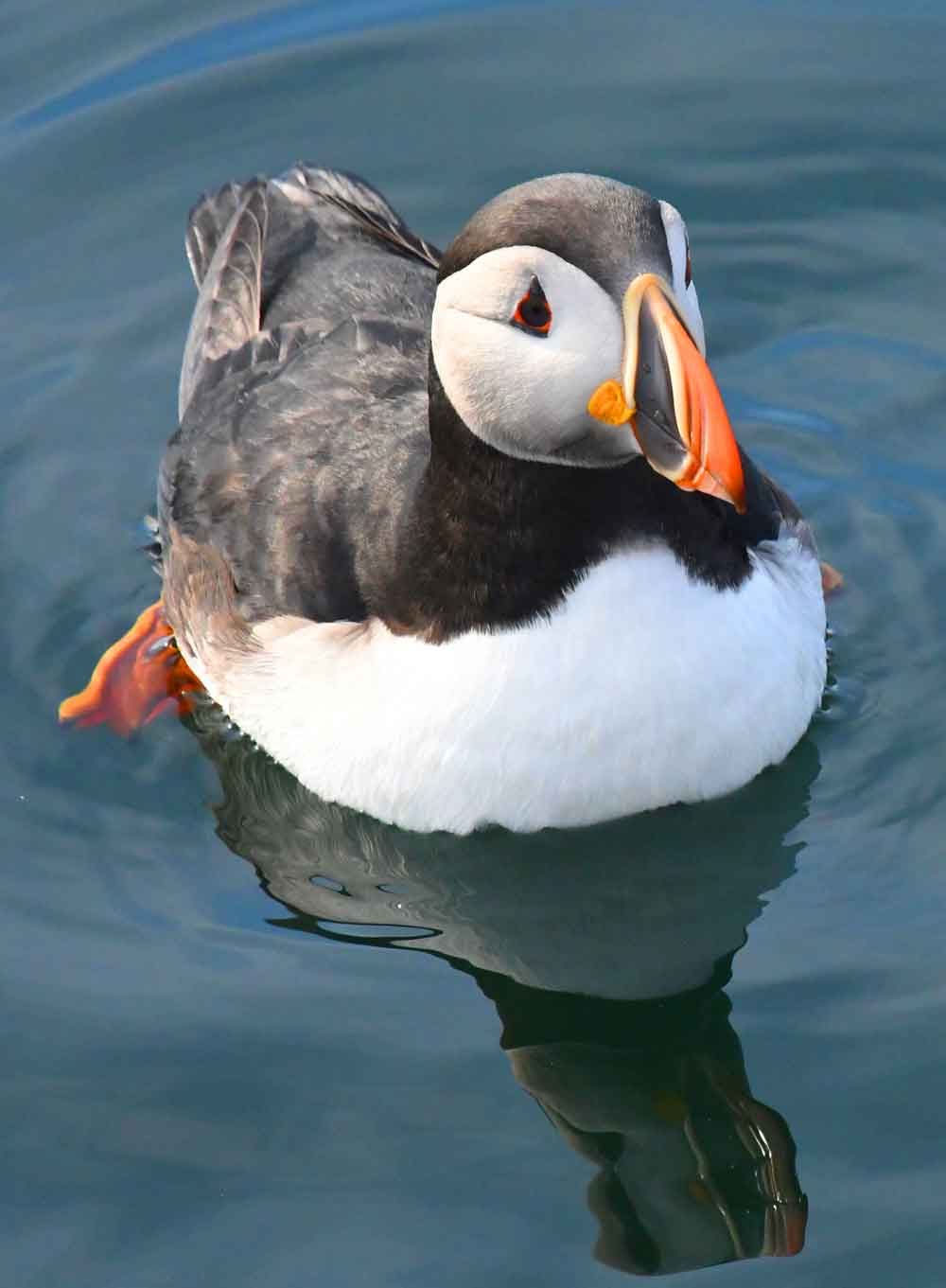 The Atlantic Puffin is a highlight of any visit to the Mingan Archipelago National Park Reserve.
. . . . . . .

Today, for a visitor, it is a beautiful place of peace and freedom. I fall asleep to the chatter of the sea birds, the sound of wind and the rhythm of the waves crashing against the island’s rugged cliffs.

How to Get There

Getting around the Mingan Archipelago

The park reserve is open from June until early September and is only accessible by boat. The most popular way to visit the Mingan Archipelago is to take one of the boat tours offered by commercial marine transportation companies departing from Longue-Pointe-de-Mingan and Havre-St.-Pierre. Tours usually last three to five hours and allow a visit to several different islands, and include guided visits led by Parks Canada interpreters. Should you prefer to see the Mingan via kayak check out Noryak Adventures based in Havre-St.-Pierre.

Whether you embark on a short three-hour boat tour, a longer visit with stays on the islands, or a multi-day kayak journey, be sure to begin your visit the Parks Canada visitor information and interpretation centres located in Longue-Pointe-de-Mingan or Havre-St.-Pierre. Obtain all necessary maps, information, and permits. Take a tour of the Mingan Islands Cetacean Studies Centre adjacent to the Parks Canada information center in Longue-Pointe-de-Mingan. It provides a fabulous opportunity for visitors to dive deep into the fascinating underwater world of whales. 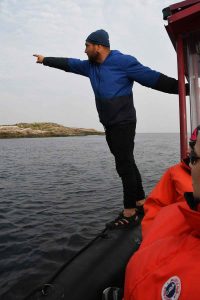 Hire a boat and guide to go searching for whales – the Minke whale is the most common, but Blue, Humpback and Fin whales are also sometimes spotted farther offshore.
. . . . . . .