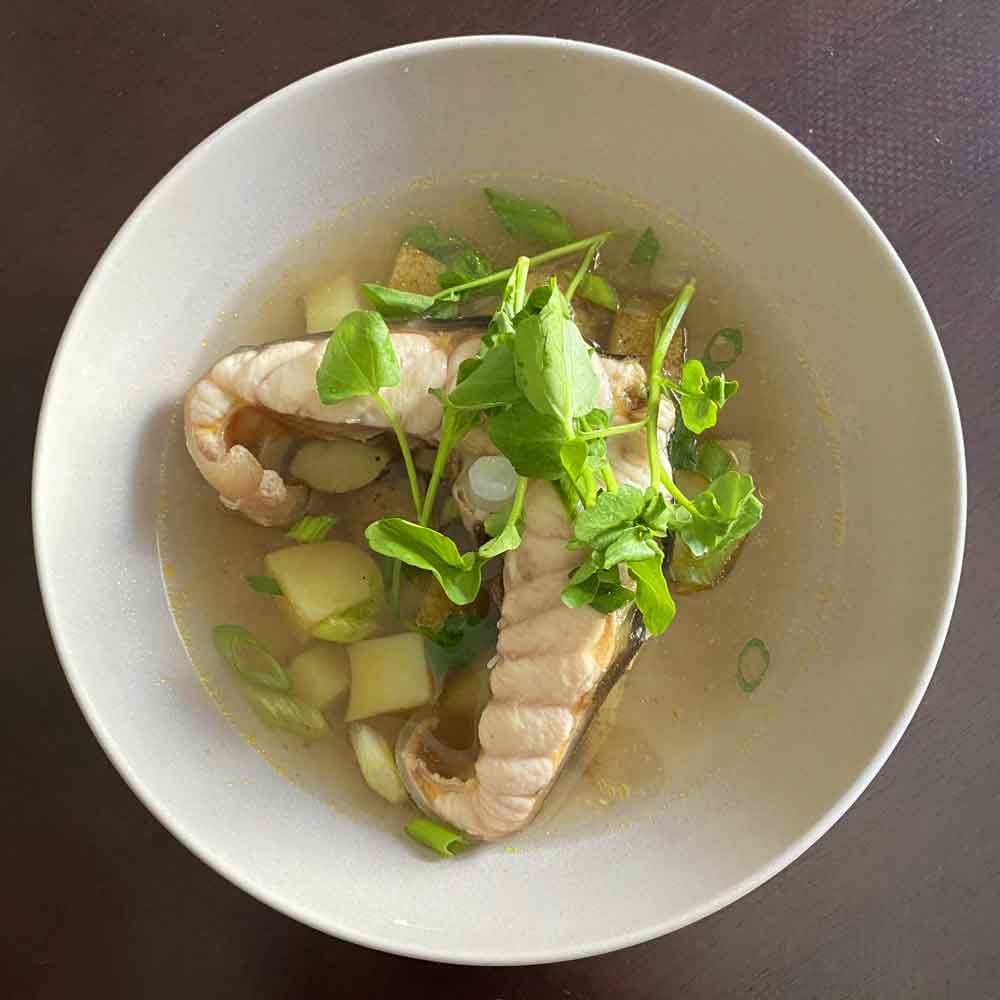 After decades of languishing with bannock and bison burgers as the staples, indigenous cuisine has blossomed.
……. 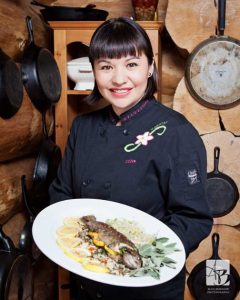 Marie-Cecile (Cezin) Nottaway of the Algonquin Anishinaabe Nation in western Quebec, is the executive chef of Wawatay Catering.
. . . . . . .

It was the ultimate frustration: mouth-watering feasts were laid out before me but I could nary touch them. Five top chefs were fashioning appetizing dishes on a special show, Indigenous Chefs Cook Off. In the midst of the current pandemic there was a catch: although live, the show was virtual, on the internet via Zoom. Each of the chefs and all of the audience were isolated in our own homes.

Top Indigenous restaurants have sprouted across Canada. Little wonder, for Native dishes are steeped in tradition and feature fresh foraged ingredients from the local area and are assembled with creativity and lots of tradition and heart. All five dishes were different, ranging from sturgeon to bison, and imbued with each chef’s own character. No question, Indigenous cuisine is unique and exciting. 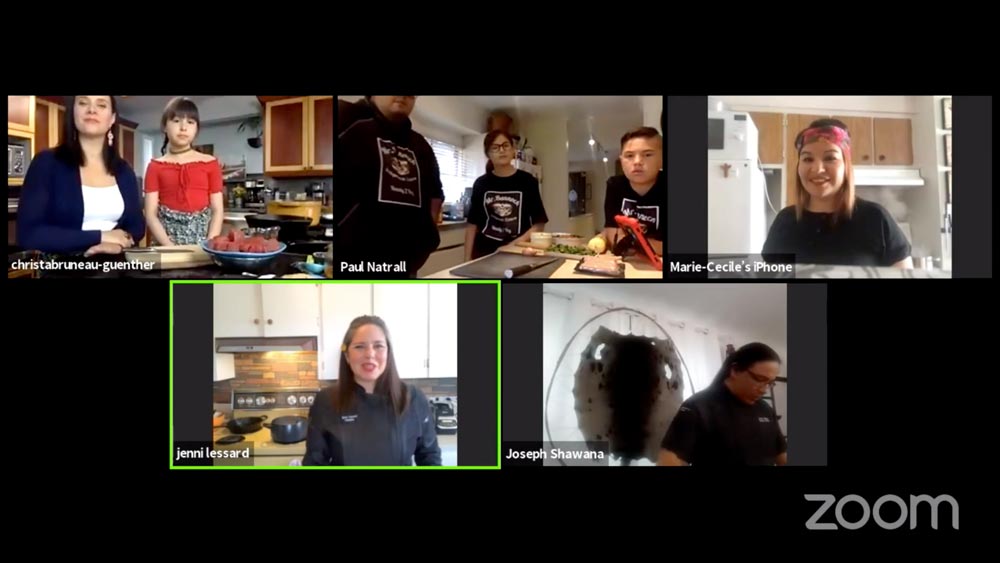 It was refreshing to see these highly regarded chefs attired in ordinary street clothes working in home kitchens, instead of wearing stylish outfits, surrounded by shining stainless-steel appliances. Okay, the videos, which were shot by their spouses or friends, were occasionally spotty. But that only added to the charm of the show. I loved the format and hope it becomes more popular. 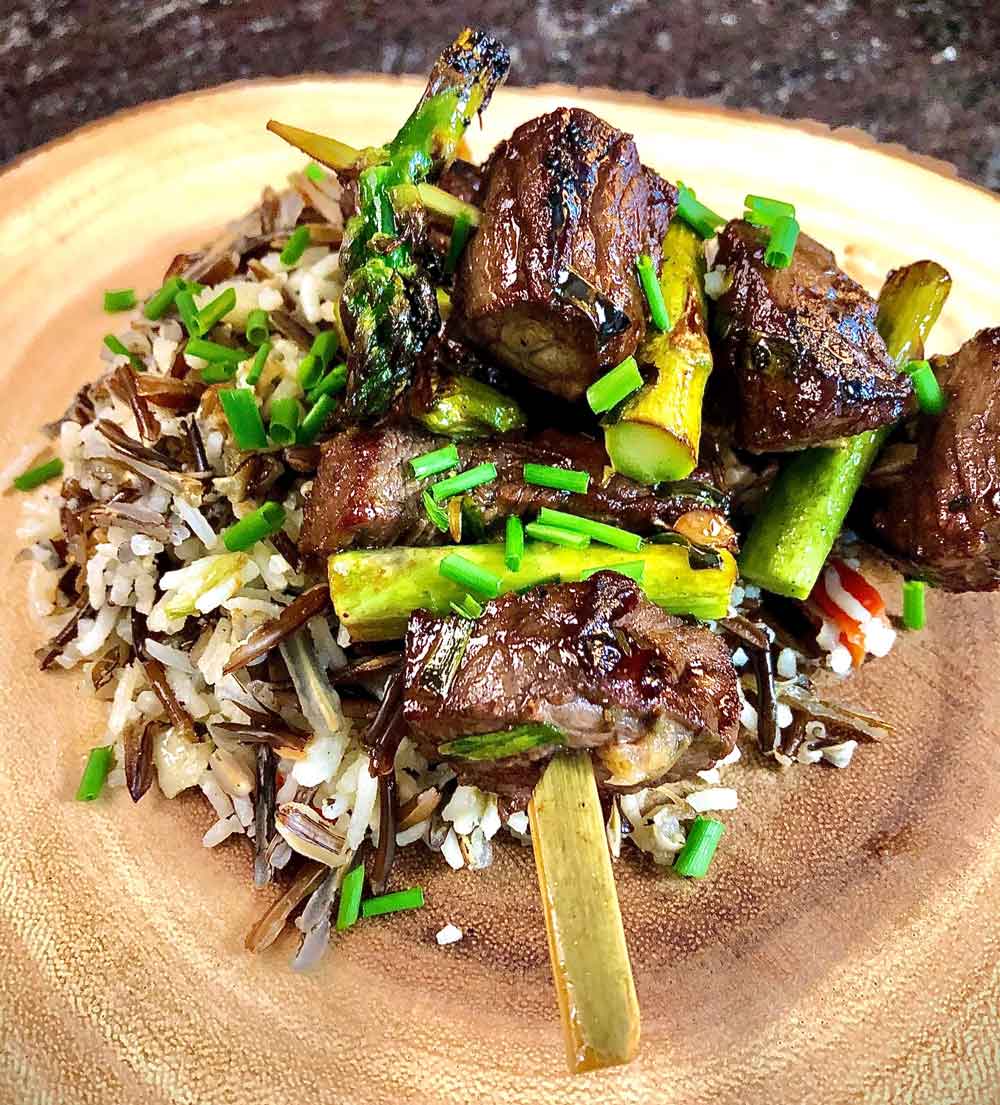 Bison skewers by Chef Christa Brunnen-Guenther.
– All photos courtesy of the Indigenous Tourism Association of Canada, except where indicated.
. . . . . . . 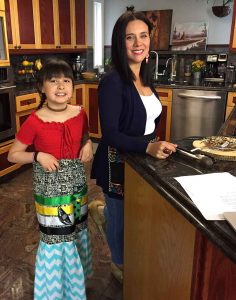 The show was emceed by Chef Christa Brunnen-Guenther of the Peguis Nation. She cooked bison skewers with wild garlic, ginger maple and bergamot over a wild rice blend infused with wild chives and sweet grass. She was ably assisted by her 10-year-old niece, Sage. Chef Christa, who lives in Winnipeg, explained, “I chose bison because it was an incredibly important animal to Indigenous people of the prairies, providing much more than just food.” Nine Indigenous ingredients enlivened the dish, including the wild garlic and chives foraged by Sage. Christa is executive chef at the Feast Café & Bistro in Winnipeg. 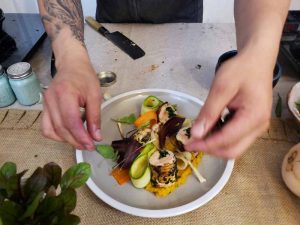 Joseph Shawana of the Odawa Nation cooked pan-seared rainbow trout seasoned with pine needle ash with a butternut squash puree and birch syrup glazed wild plums. Ingredients were crammed into the cooking area at his home in Toronto and a seal skin was mounted on a large wooden frame behind him. Joseph is executive chef for his restaurant, Ku-Kum Kitchen, which will operate in Toronto once the pandemic eases. Joseph is also Indigenous Culinary Advisor for Centennial College in Toronto. “Currently I’m very busy laying out the curriculum for the new Indigenous cooking classes. I’m also planning ecotourism at my reserve based on Indigenous cuisine and foraging.” 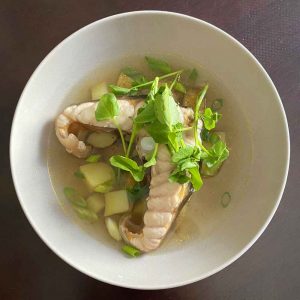 Marie-Cecile (Cezin) Nottaway of the Algonquin Anishinaabe Nation in western Quebec, where she is the executive chef of Wawatay Catering, prepared a sturgeon soup with potatoes, onions and microgreens. Cezin, who has a wonderful smile, told a tale of a pike and a sturgeon who raced around a lake until the pike hit its head on a cliff. Cezin giggled that she was too shy to finish the story, and didn’t. 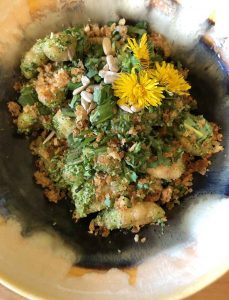 Jenni Lessard, a Métis, is the executive chef at the Wanuskewin Heritage Park, just north of Saskatoon. She wore a dandelion in her hair while preparing a sunchoke gnocchi with dandelion greens, sunflower pesto and toasted garlicky bannock crumbs. Jenni is privileged to work at one of the most important Indigenous locations in the country. Wanuskewin is a national historic site with 21 ancient campsites, several tipi circles, buffalo-rubbing boulders and a 1,500-year-old medicine wheel. The site shows the close relationship between buffalo and Indigenous peoples. 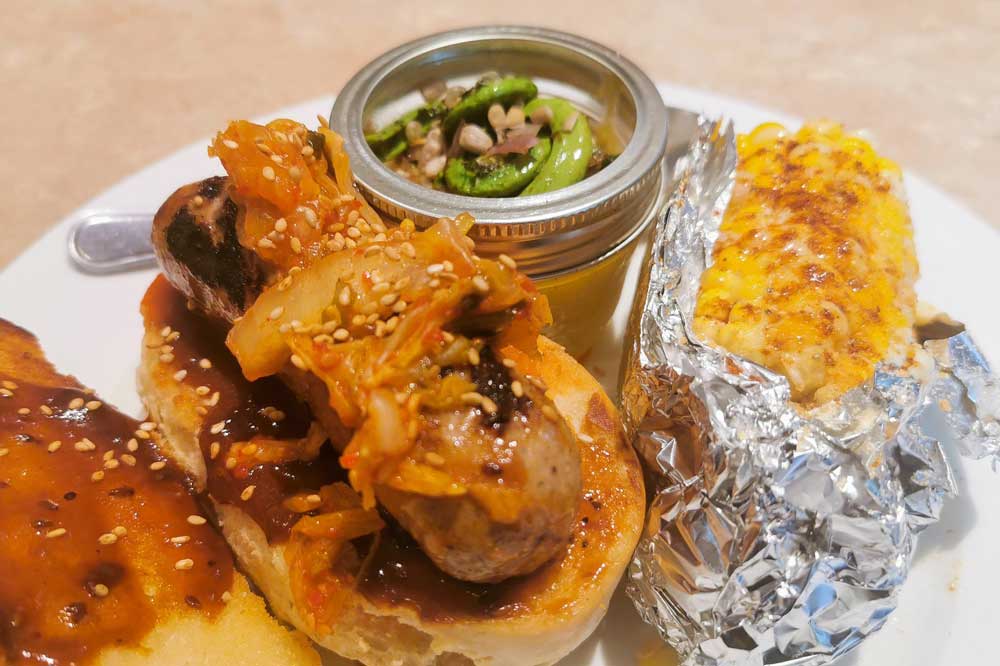 Paul Natrall of the Squamish Nation is the executive chef of Mr. Bannock Food Truck, which has been operating in Vancouver since 2018. He cooked a barbeque duck sausage served with a fiddlehead polenta, corn on the cob and sourdough bannock. Paul said, “This is Indigenous fusion, which uses fresh local ingredients and ancient cooking methods such as smoking, clay and stone baking.” Paul’s son, Marcus, and daughter, Arionna, assisted, showing the importance of family to Indigenous people.

Christa won the audience vote for best dish and presentation. She shared her honorarium with Sage.

To promote Indigenous cuisine, which has burst into prominence only recently, the Indigenous Culinary of Associated Nations was launched in November 2019. It created the Cook Off show.

If you have the urge to sample Indigenous cuisine — and you should — there are a number of excellent places to dine, in addition to the restaurants of the five Cook Off chefs. These range from food trucks to fine dining, and include:

Food was central to traditional life, connecting Indigenous people to family, community and even the afterlife. It’s delightful to see it making such a strong comeback.