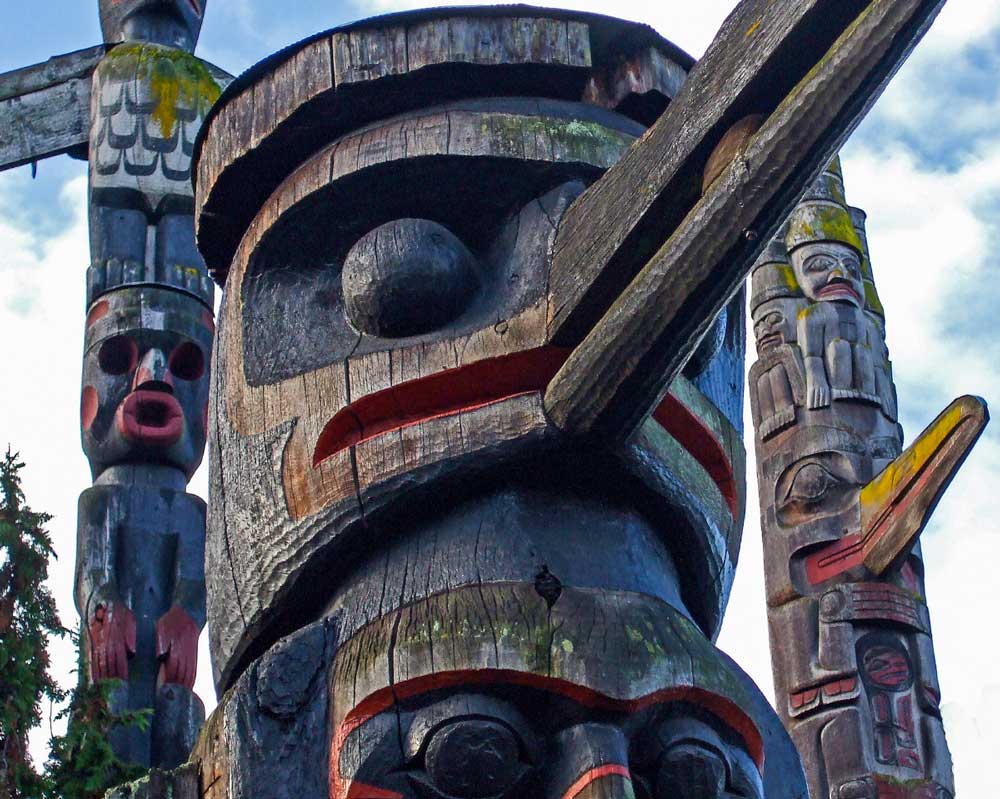 Victoria’s Thunderbird Park is a Celebration of Totems
…….

Thunderbird Park is one of the most serene and beautiful places in Canada. Eleven traditional totem poles rise gracefully skyward, carved in thunderbirds, orcas and bears, creatures both real and mythical. A traditional longhouse has a large green and white sea-monster face painted on its side and a Kwakwaka’wakw Heraldic totem towers beside the longhouse. It’s hard to realize you’re in downtown Victoria next door to the Royal BC Museum and only a few minutes’ walk from the iconic Empress Hotel and the Inner Harbour. The park is both spiritual and moving. 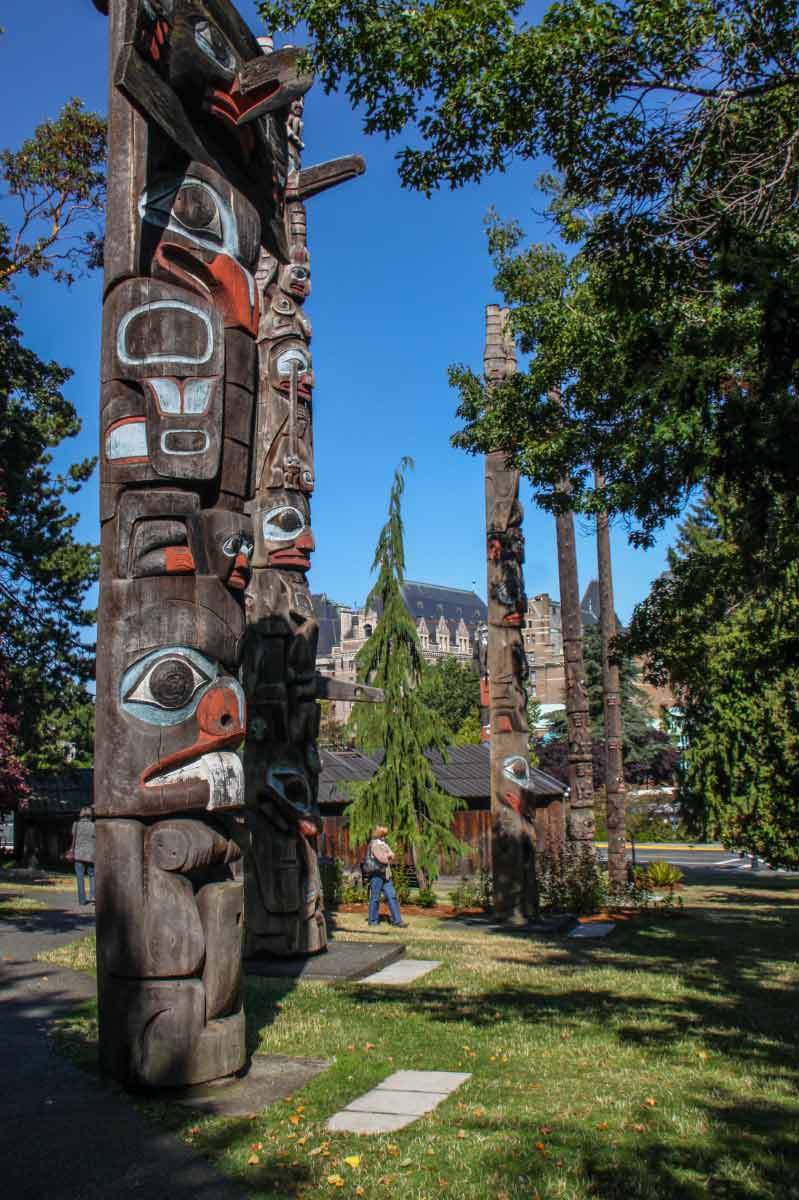 Victoria’s Thunderbird Park with the Empress Hotel in the background. – All photos by Hans Tammemagi except where indicated
. . . . . . .

Thunderbird Park has a fascinating history. In the late 1930s, with many of the totems acquired by the Museum starting to decay, the Kwakwaka’wakw carver, Mungo Martin, was hired to make replacements. He and his assistants carved eleven replica poles, which were raised in the park in 1941. In 1952, Martin also constructed the long house, Wawadit’la, which nestles among the totems. Thunderbird Park preceded the Royal BC Museum, which didn’t appear until the 1960s. (Although founded in 1886, the museum was located at different sites in earlier years).

In 1952, the first legal potlatch in British Columbia in almost seven decades was held at Mungo Martin’s longhouse. 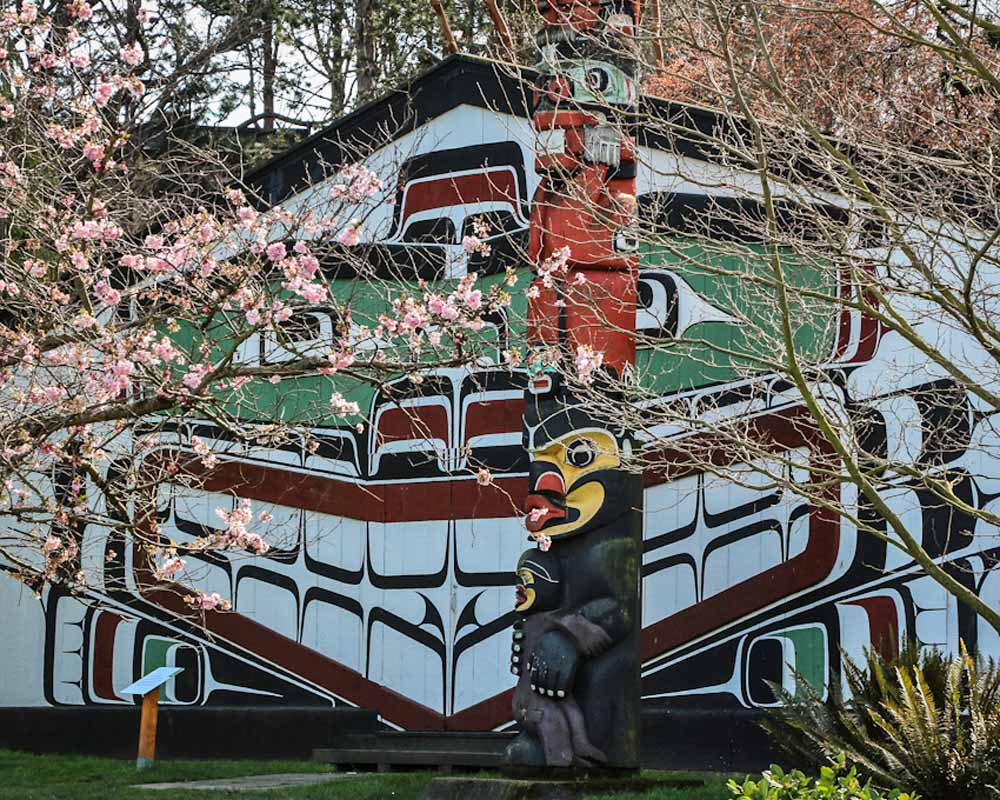 Many of the top Native carvers from the west coast have honed their craft at the park. The first carving shed was built in 1952 and burned down; the second decayed and was replaced. The third shed was taken down in 2009 and has not been replaced.

Although all the totems in Thunderbird Park are replicas, a new one was added in 2001. The Kwakwaka’wakw Honouring Pole, topped by a thunderbird, was carved by Jonathan Henderson and Sean Whonnock. It is dedicated to the Coast Salish people on whose ancestral land the park is located. 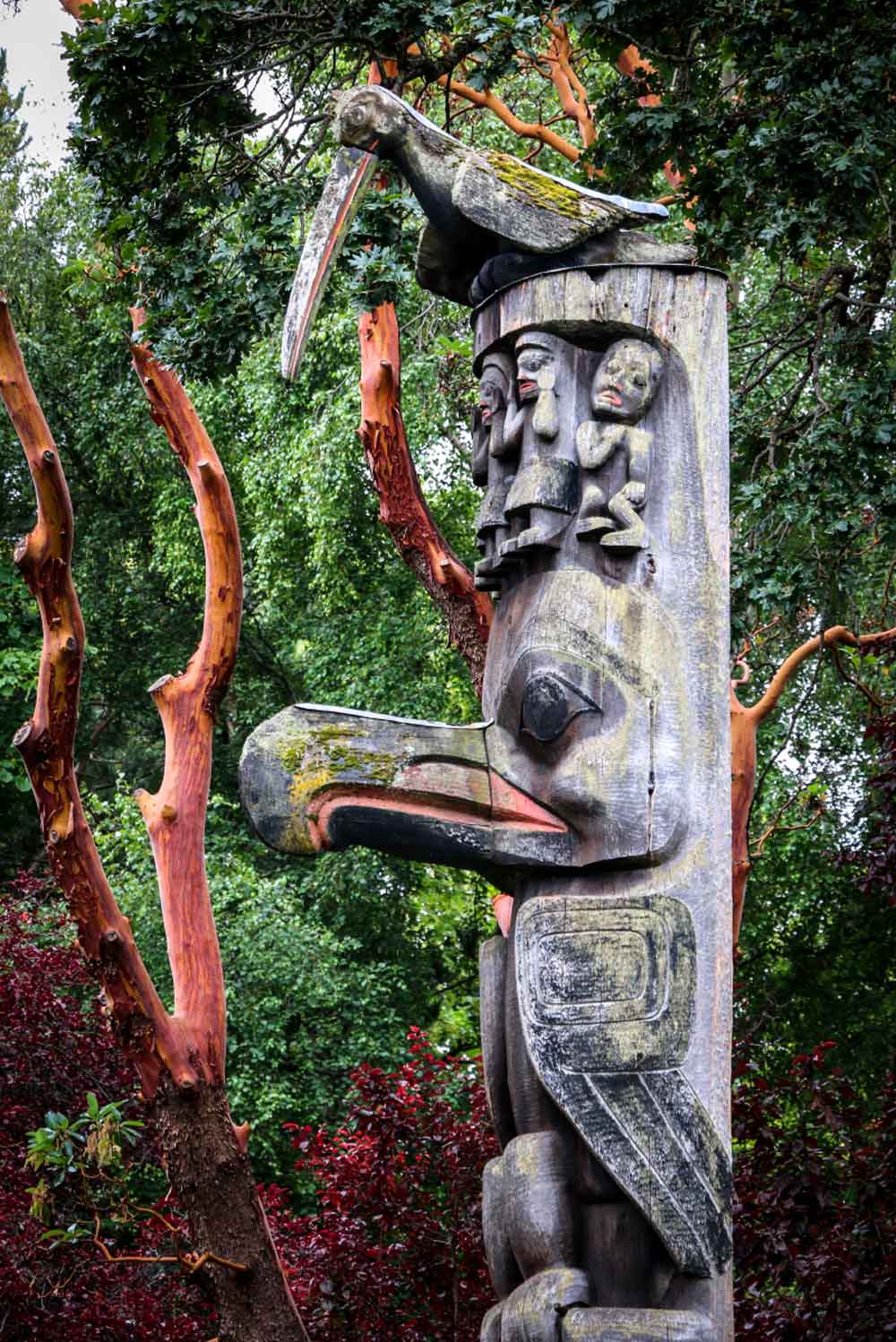 The adjacent Royal BC Museum is well worth a visit, and has long been a strong supporter of Indigenous traditions. Not only did it collect the totems that rise so majestically in the Park, but it has many excellent Indigenous programs and displays including the state-of-art exhibition, “Our Living Languages: First Peoples’ Voices in B.C.”, the First Peoples Gallery with numerous towering totems, a superb display of masks and thousands of artifacts. The Museum works closely with Indigenous peoples, for example, striving to repatriate numerous artifacts back to the Indigenous people and their families that originally owned them. 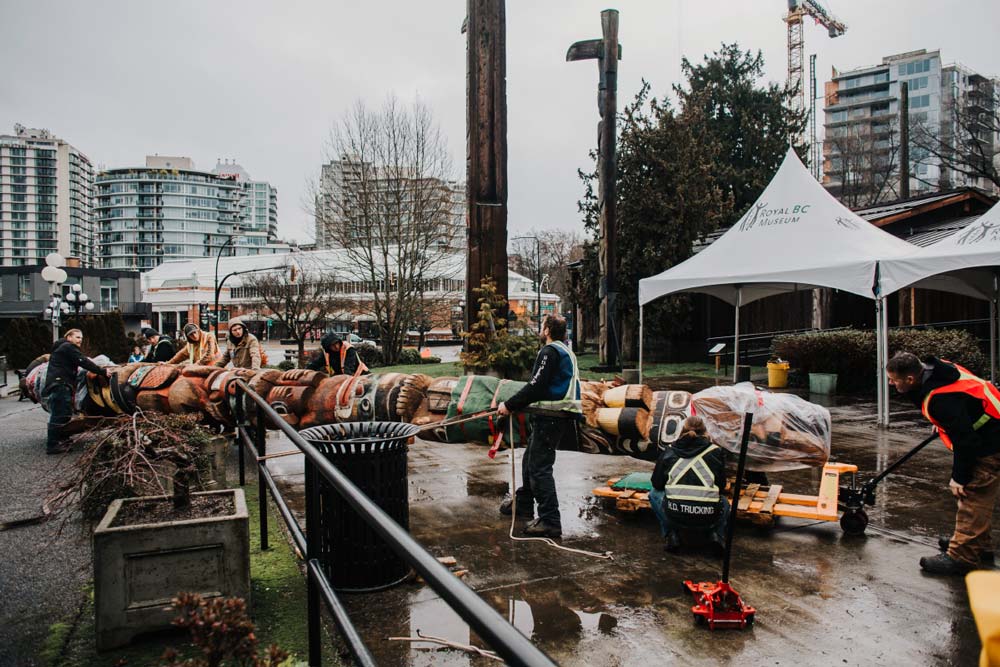 Lou-ann Neel of the Kwakwaka’wakw Nation is an expert in the Museum’s new Repatriation Department and was closely involved with the return of two badly decayed poles to Fort Rupert in 2019. One was a Kwakwaka’wakw house post replica and the other a Haida mortuary pole. Chief David Knox, the great grandson of Martin, is working to build a Mungo Martin Park at Fort Rupert, where Martin was born, as a final resting place for old poles. 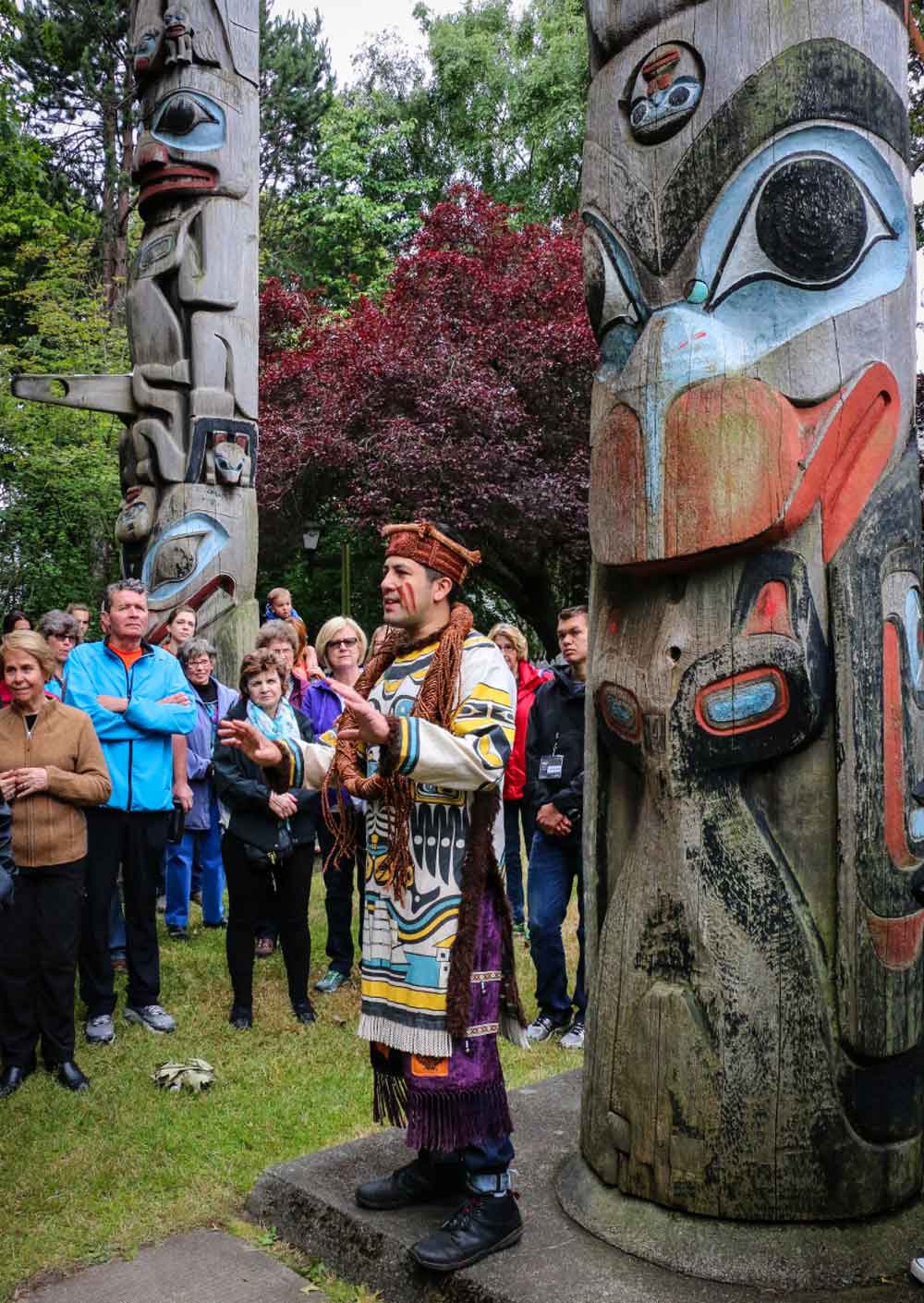 A major program of repair and upgrading of totems in Thunderbird Park to current seismic codes started in 2018. Two poles just needed some cleaning and moss removal. But the 42-foot Kwakwaka’wakw heraldic pole, which stands in front of the Wawadit’la big house needed major work. Carved in 1952-53 by Mungo Martin, his son David Martin, Henry Hunt and his niece, Mildred Hunt, the pole includes crests from four Kwakwaka’wakw nations to honour all 16 nations. From the top, the pole has a noble thunderbird with outstretched wings, then a grizzly bear holding a copper, a grizzly in human form, a beaver and the wild woman of the woods holding her child. The combination of mythical and real creatures is breathtaking.

The pole was taken down and moved into the museum’s lobby where repair work was done under the watchful eye of the public. People were invited to assist with the repainting and more than 75 contributed. 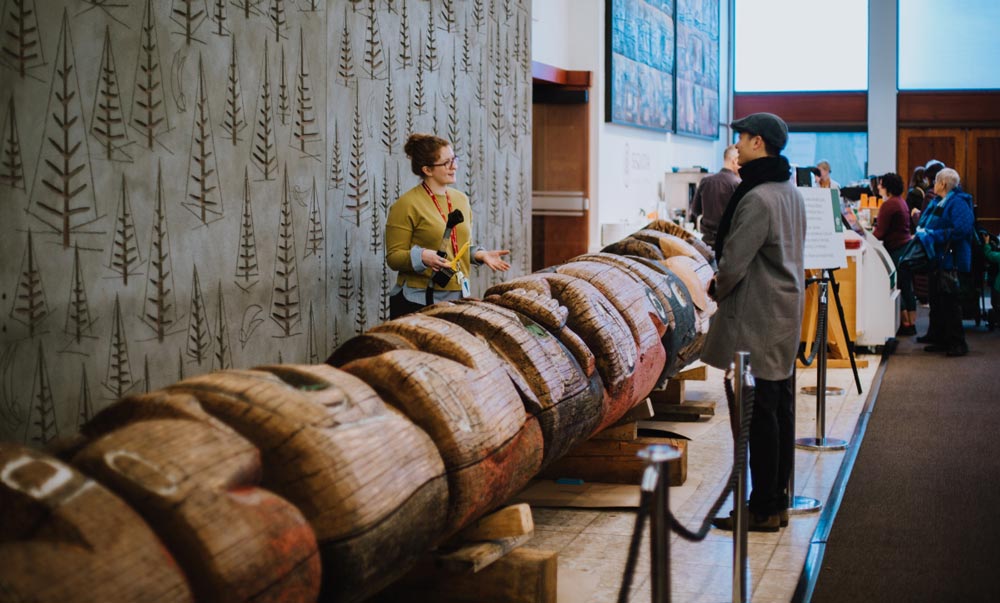 Fully repaired, the pole was raised on March 16, 2020, and a celebration was held in Wawadit’la with those who helped to carry out the work to restore the pole. 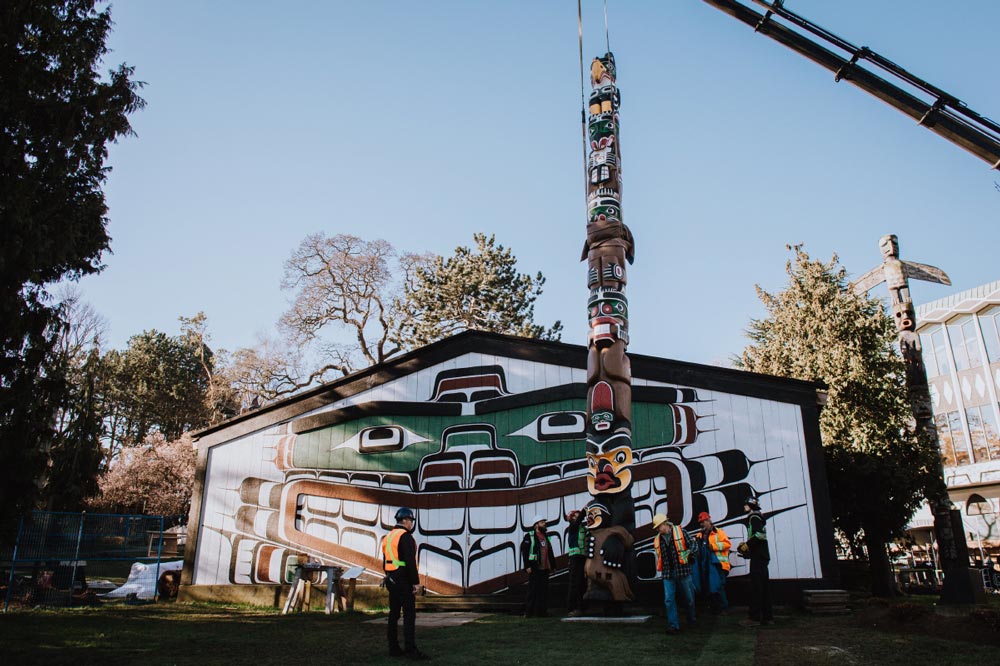 While the pole was still horizontal, Chief Cranmer of the ‘Namgis First Nation blessed it by chanting and brushing the pole with cedar boughs to clear the energies on and around the pole to ensure its safe reinstallation. Eagle down was spread around the pole to ensure everything would go smoothly as the pole was raised. Then the pole was lifted into position in front of Wawadit’la House. Chief David Knox, ´Walas ´Namugwis, of Fort Rupert was part of the ceremony and said, “It’s an honour to walk in my great-grandfather’s footsteps to preserve our heritage. It’s important to teach the world our cultural traditions, especially young learners who are curious to know about carving and the history of the poles.” 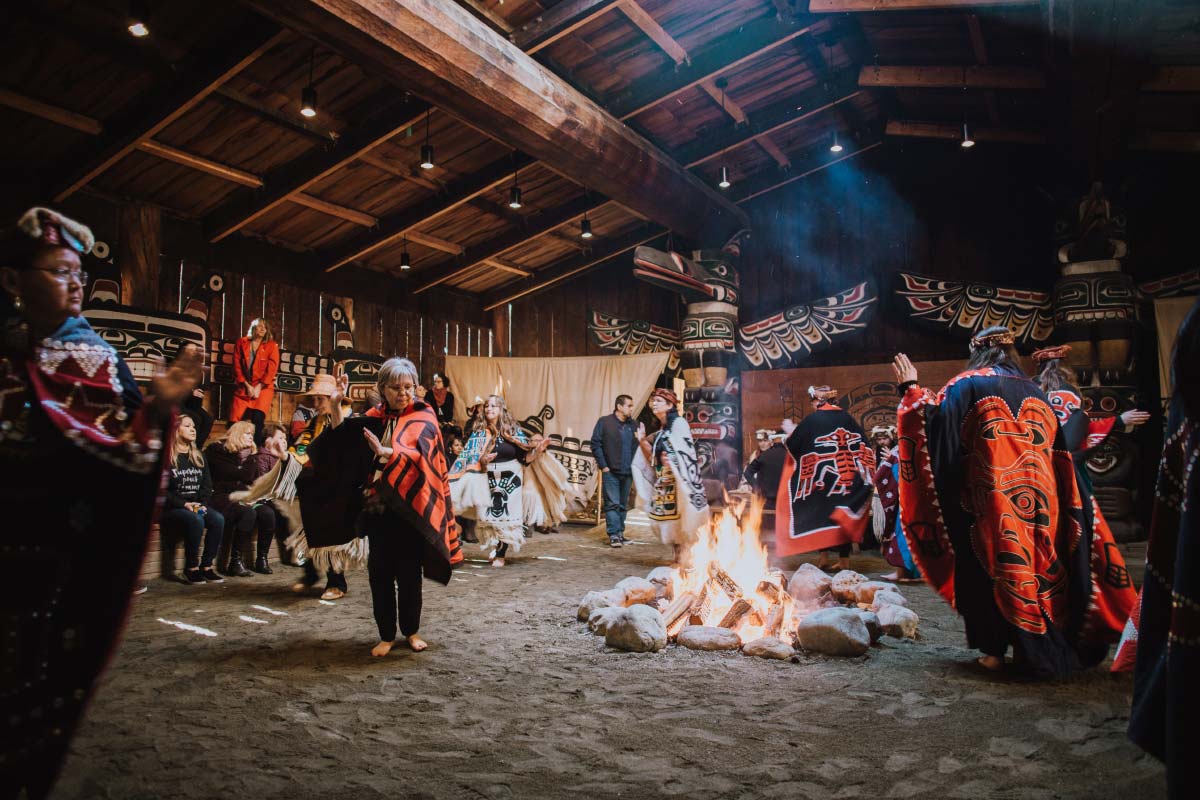 The ceremonies moved inside Mungo Martin’s big house, which is still used today for First Nations events, with the permission of Martin’s descendants, the Knox family. A fire roared in the middle of the large room with elegant, colourful houseposts against the walls. The sounds of drums beating mingled with loud guttural chanting as figures in colourful regalia and masks danced on the dirt floor.

That Thunderbird Park continues to preserve the treasure chest of rich Indigenous culture is a testament to Mungo Martin’s talent and intentions when he created these monumental works for everyone to appreciate and enjoy.’

Indigenous Artist Carey Newman – A Witness to our Times

Creation of a Totem Pole