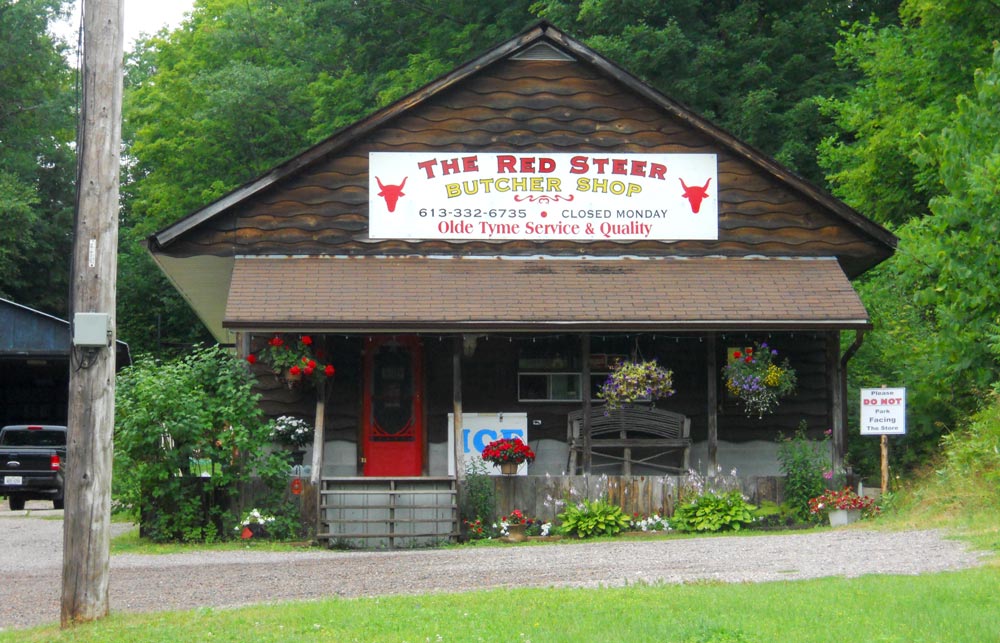 Check out The Red Steer if you find yourself anywhere in or around Bancroft, Ontario.

For the final home stretch of the BBQ season (for some anyway, in my personal experience I happen to know many a brave Canadian who has pulled the BBQ right up to the backyard sliding door to flip steaks in February) a hidden gem of a butcher shop humbly awaits your meat eating fantasies. The Red Steer provides: steaks, roasts, homemade sausages, homemade Red Steer burgers, Ontario lamb, fresh fish, seafood and Ivanhoe Cheese in a self-described Old Tyme Service & Quality shop. Their beef is ‘dry aged’ (a process of hanging in the open air) on the premises.

Just South of Bancroft on Highway 62 is a newly adopted extension of the town (formerly its own modest sized town) named L’Amble. As the directions to the Red Steer were once described to me from a local resident of Bancroft:

“Whatcha wanna do is drive South on 62. Once you see the sign saying ‘L’Amble’ you’re gonna wanna go ahead and slow right down”.

This is the most accurate way anyone could explain how to arrive at ‘the Steer’ (as now feeling like a regular, having been a handful of times, I feel comfortable using this shorter variation) from Bancroft since the highway is fast and ‘the Steer’ is easy to shoot past.

The man at the helm of this fantastic butcher shop is a hulking, super friendly guy named Duane who makes the most incredible sausages I have ever had the pleasure of experiencing. With flavours ranging from Honey Garlic-Farmstyle (his wife Julie’s favourite), Garlic and Chive-Bratwurst (one of his favs), sundried tomato, Cajun Italian and pork and beef breakfast sausage, trying one of each will not be a decision you will soon regret. Softly packed, these sausages melt on the tongue with perfect flavour and soft texture. Duane explained that they get all of their meat within Ontario, their beef and pork hailing from Norwich Farms in London, Ontario and their grain fed chicken is from a farm in Peterborough, Ontario.

The Red Steer has been around for the past five or so years, it was opened by Duane and Julie, with occasional help from reliable workers when needed. I chatted with Duane on my last visit and learned that he has no interest in today’s technology. As a result, you will not find a website, facebook page, blog, tweet or email address pertaining to this amazing butcher – heck, the business phone number isn’t even listed, Duane informed me with some pride. They have a fax machine, but as Duane explained, he has little time or patience for any other technology and its stressors.

On my most recent visit, he was selling vacuum wrapped racks of smoked and seasoned ribs that were marinating within the swells of the packaging in a thick reddish brown honey bbq sauce. He advised, at around ten dollars a rack, we try one out. They have, after all, been selling off the rack… no pun intended…“For example,” he began,

“I had a guy in here yesterday. He bought one. Came back in today, bought five more. I would say I had tried them myself, but I haven’t. Keep selling out before I get a chance!”

Well, not being able to argue with perfectly good reasoning we happily added it to our pile of different flavoured sausages and fresh ribs which we marinated and cooked low and slow later that night.  All other meat we had, for weeks to come, made us yearn for an address closer to what might be one of the best butchers in Ontario.

Author’s Note: at the time of this post, the Red Steer is closed on Mondays. Their telephone number is 613-332-6735. We were unable to ascertain the fax number.