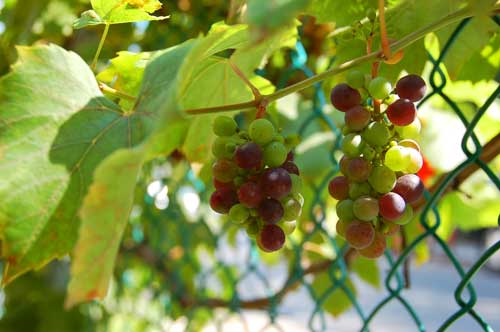 A couple of years ago I paid five bucks for this amazing heritage grape vine at Parkdale Horticultural Society‘s annual Plant Fair. People line up for it every year. Our vine is growing like a weed along our fence and this year, there must be a bushel’s worth of grapes on it. I am pretty sure the guy I bought it from told me it was a Brant heritage vine first cultivated in the Niagara region of Ontario circa 1860. I thought this would be easy to research but have had difficulty finding any information on the vine so, if you read this and can enlighten me, please do. I am also wondering if the grape is connected to the family of Joseph Brant.

Joseph Brant played an important role in Canadian history. Originally from what is now northeastern Ohio, the celebrated Mohawk chief fought in the American Revolution for the British. Following the war, he and his Mohawk followers were awarded land along the Grand River in the Niagara region of Ontario for their war service (although wouldn’t it have been Mohawk land to begin with?). After the war, Brant continued to be an influential force with politicians, including President George Washington. What many don’t know is the role that Joseph Brant played in Niagara Falls becoming a honeymoon destination. Niagara historian Sherman Zavitz, in his book, It happened at Niagara, wrote that the first honeymooners to visit Niagara Falls were invited by Brant.  Theodosia Burr, the daughter of United States Vice President, Aaron Burr, and her new husband, Joseph Alston traveled to Niagara Falls following their wedding in 1801. They later visited Brant who lived on the Grand River.

But the real reason I am writing about our Brant heritage grape vine is to tell you about the effect it has had on our neighbours. Toronto can be reserved at the best of times so our neighbours’ reaction to the vine has been a pleasant surprise. Katarina is an elderly Hungarian woman who passes our yard every morning on her way to her daughter’s place. One day I found her pinching new sprouts. “Do this every week and you’ll get more grapes”, she told me. And we have. Then there’s the old Portuguese guy who gently scolded us for not tying our vine to the fence to give it better support. The next day I noticed he had done it for us. Last fall, when our grapes were at their sweetest, our Vietnamese neighbour who lives down the alley from us stopped every morning on his way to work to grab a handful. Now when I walk to the corner store and he’s out in his garage, he stops whatever he’s doing to say hi. And just this week, I met another neighbour, a Portuguese grandmother who has taken to walking her dog by our place and stopping to search for the ripest grapes. I told her today to keep coming back.