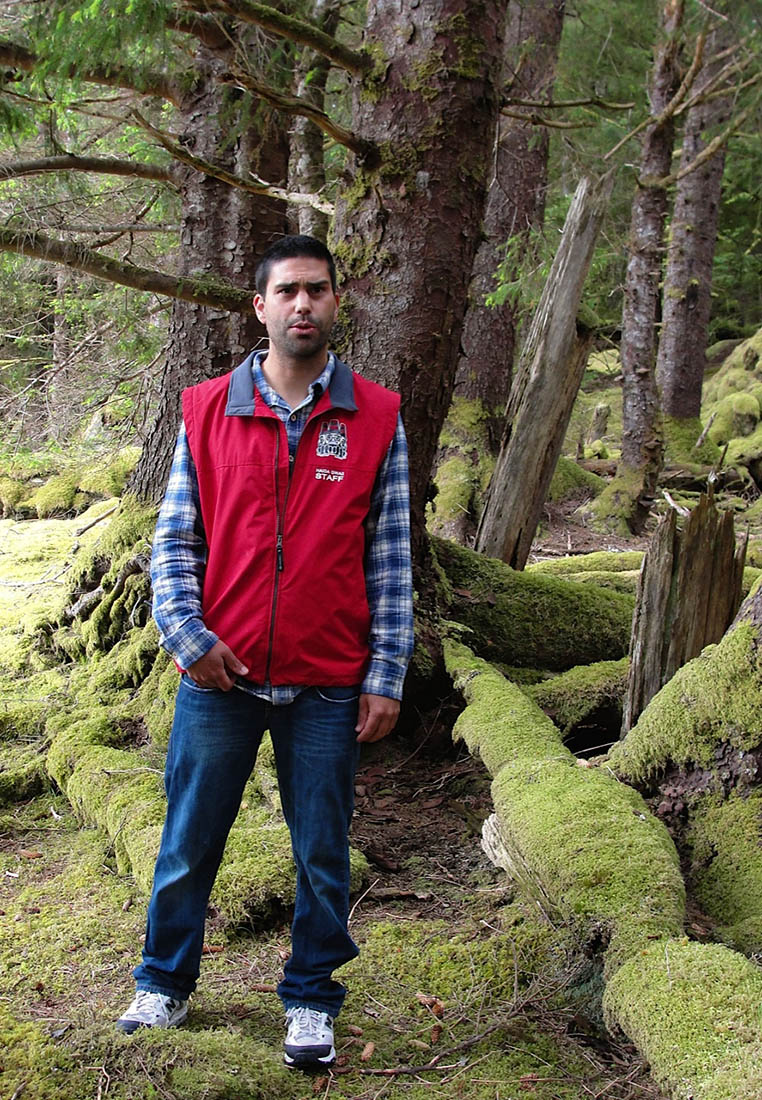 Sean Young is Collections Curator at the Haida Gwaii Museum and a watchman each summer.
– Photos by Carol Patterson
. . . . . . .

His dark gaze ran quickly over me and the other eleven curious travellers deposited on this sacred island. “Hello, I’m Sean Young,” his solemn look replaced with a broad grin as he stepped forward into soft light filtering down to the forest floor. His vest carried a crest of three human figures wearing tall hats – watchmen – and he is one of a dozen people who work each summer in a modern version of a centuries-old tradition.

For generations Haida posted sentries over their villages. These watchmen would raise an alarm when they spotted danger. Several decades ago, the Haida Nation became concerned about vandalism of sacred sites with massive logging underway and unregulated tourism. In 1981 people volunteered to watch over several sacred sites, using their own boats to reach remote beaches. 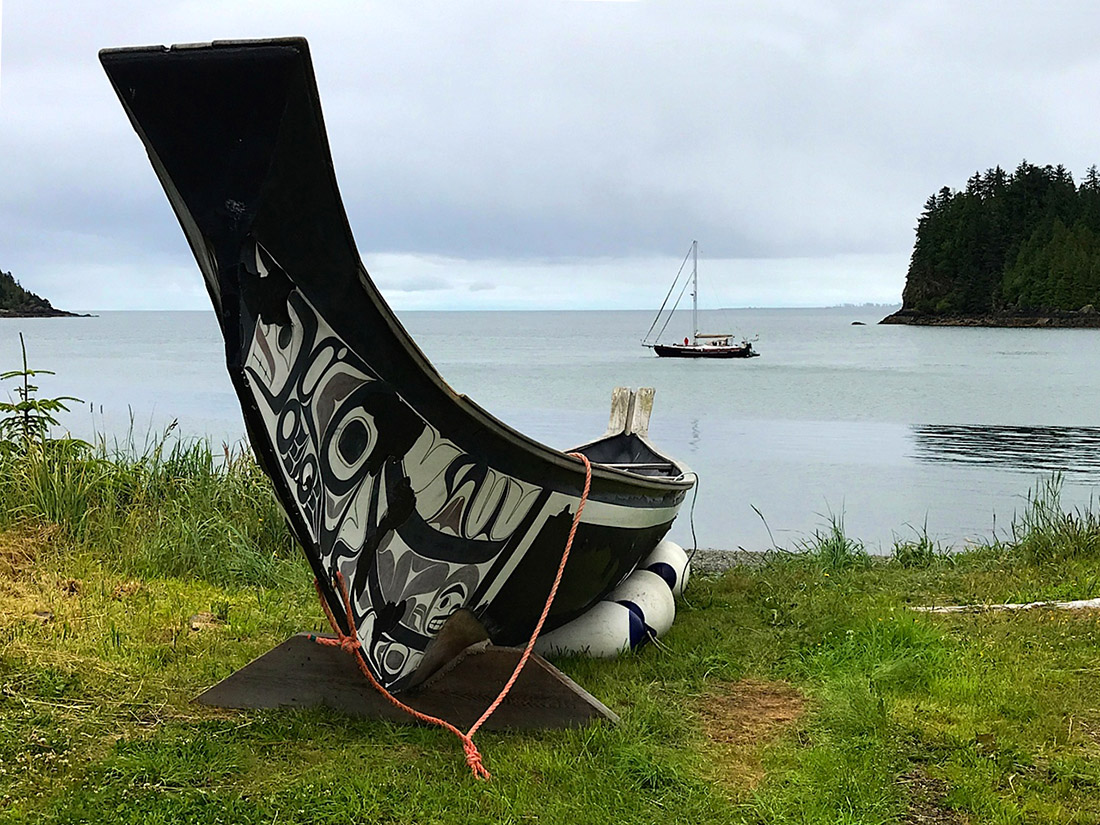 A 1985 Haida protest to stop logging on HlGaa Gwaay (Lyell Island) led to the 1988 South Moresby Agreement to designate Gwaii Haanas as a national park preserve. Five years later the Haida nation and the Government of Canada signed the Gwaii Haanas agreement; they agreed to disagree on the issue of ownership but agreed the area should be protected. In 2010 with The Gwaii Haanas Marine Agreement protection was extended to the sea floor.

Gwaii Haanas is co-managed by the Archipelago Management Board (AMB) with three representatives from the Haida Nation and three representatives from the Government of Canada. The Haida Gwaii Watchmen now have their own management structure and are funded by Parks Canada. Each summer Haida men and women work at five cultural sites in Gwaii Haanas and for many visitors, time with the watchmen is especially memorable. 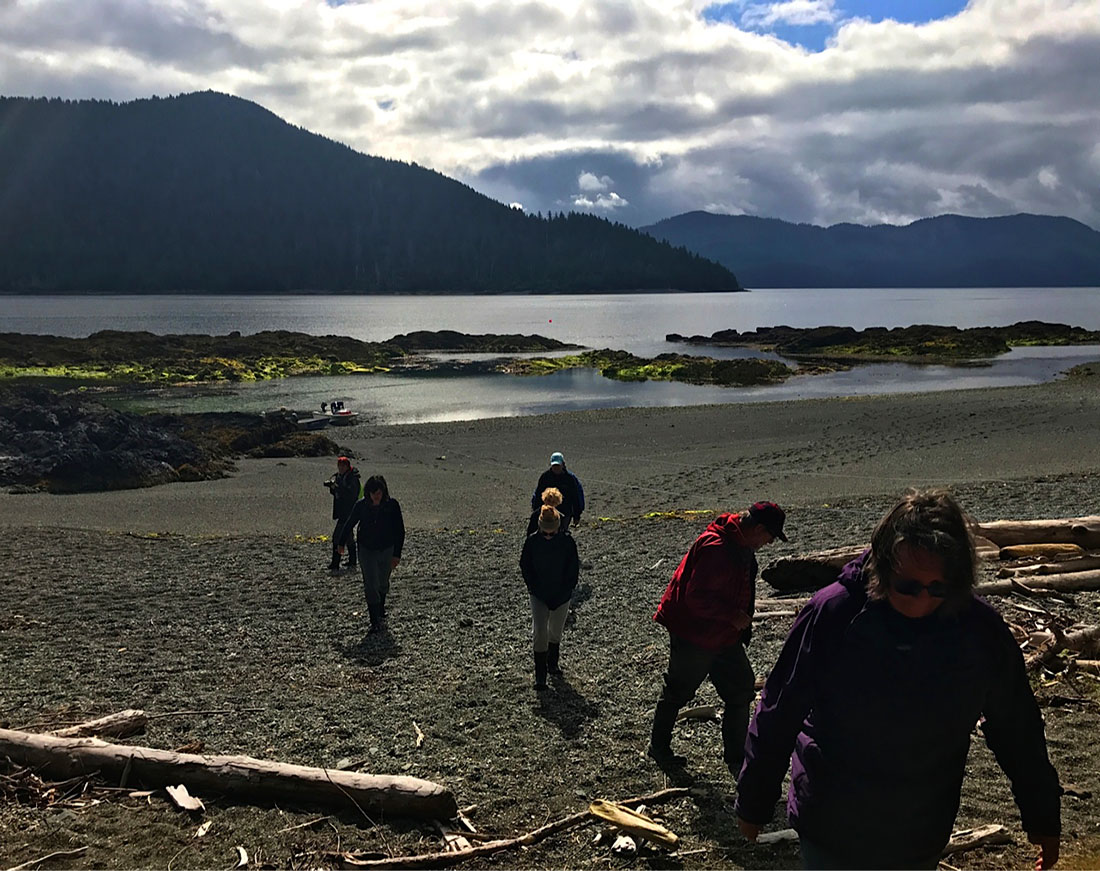 Visitation to cultural sites staffed with Watchmen is limited to twelve tourists at a time.
. . . . . . .

Before we had landed on Lyell Island at Hlk’yah GawGa – also known as Windy Bay – Island our captain, James Cowpar had radioed Young for permission to land. Only 12 people can visit the five watchman sites at one time and what happens on shore is largely up to individual watchman.

Young is proud of the Windy Bay site he now watches over (in previous years he was stationed at T’aanuu Llnagaay). In 2013 the 42-foot monumental pole was raised here to celebrate 20 years of co-management. It’s the first pole to be raised in over 130 years and people want to see it. “It used to be if we had 150 visitors a month we’d be doing fist pumps,” rued Young on the tricky tides and winds that made the landing undesirable to many. 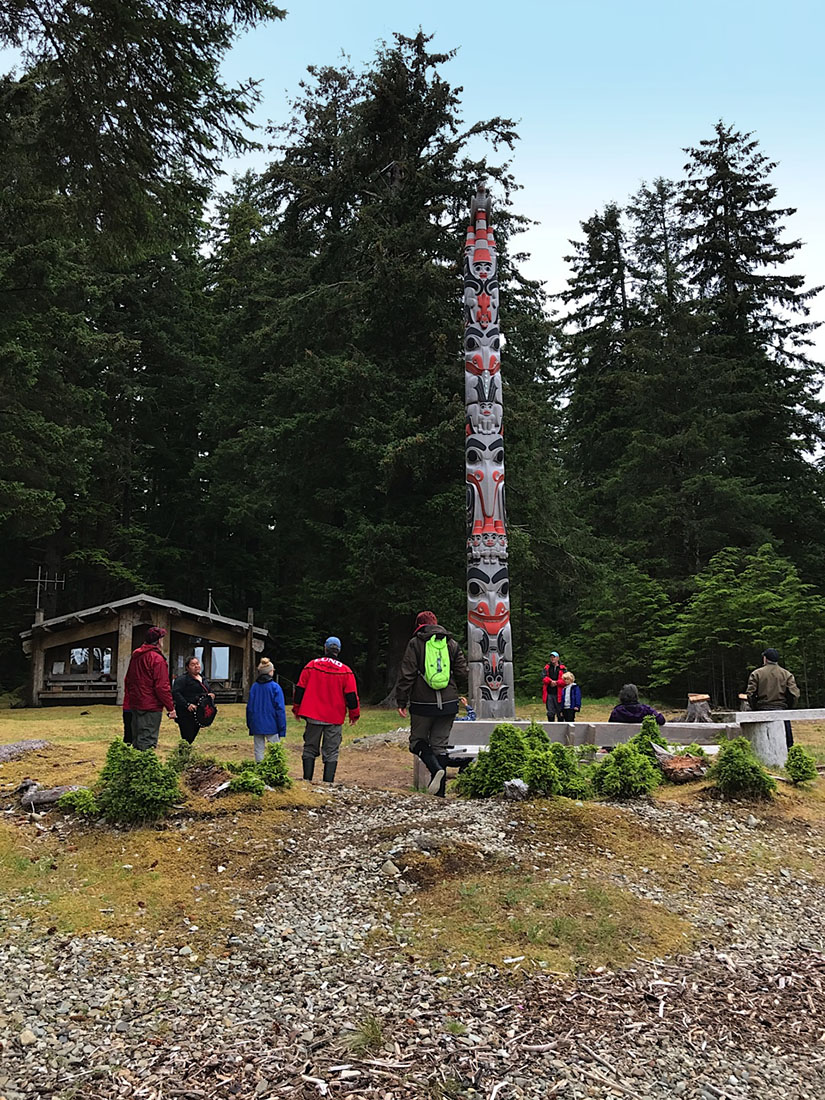 The Legacy Pole is keeping watchmen busy as people flock to the first pole raised in Gwaii Haanas in over 130 years.
. . . . . . .

Now more people are making the effort to get here. I craned my neck skywards as Cowpar points out the figures on the pole. “The eagle at the top and the sculpin on the bottom represent the agreement to protect from mountain top to ocean floor,” he explained, “the five faces you can see near the bottom represent five good people who stood together (during the protests).”

The interpretation felt more informal than in other national parks I’ve visited and later Superintendent Ernie Gladstone (himself a former watchman) will confirm my impressions.

“We don’t require them (the Haida Gwaii Watchmen) to tell stories or act as guides to visitors. It’s something they chose to do on their own”

he clarified, “Their stories are not scripted. It depends upon the visitor, how large the group, what their interests are. And they (visitors) learn different stories and they learn about the personal connections these watchmen have with these individual sites.” 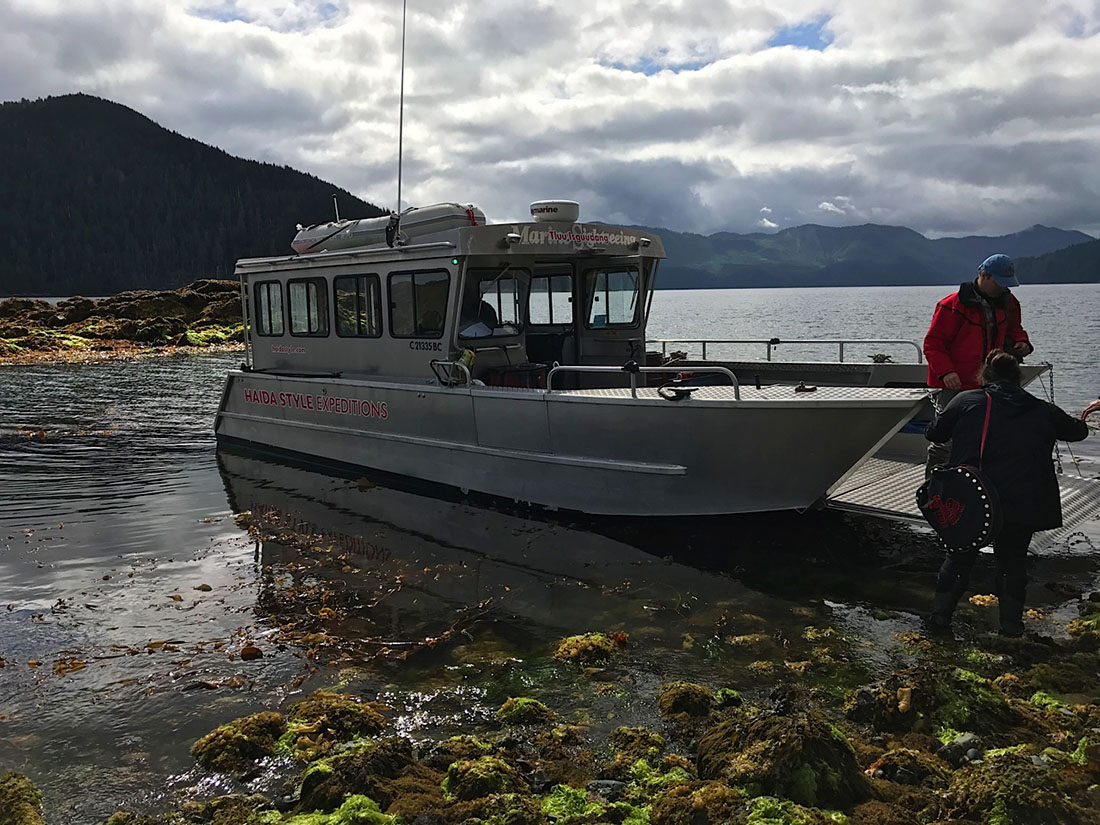 Haida Style Expeditions is one of only two companies allowed to take day tours into Gwaii Haanas.
. . . . . . .

Watchmen receive training in boat and radio operation but when a watchman takes the time to tell you about their culture they are going above and beyond their job requirements and people sense this. Anna Marie Husband, Visitors Services Team Leader would later tell me, “Meeting the Haida Gwaii Watchmen is often the highlight for visitors to Gwaii Haanas. The Watchmen embody the living Haida culture; they give visitors the opportunity to make personal connections with Haida people and learn about both historic and contemporary Haida life.”

At our second landing in Gwaii Haanas on Gandll K’in Gwaay.yaay (Hotprings island), watchmen Donna Carter and David Dixon greeted our group with wide smiles. Dixon lives in Vancouver but has comes back as a watchman to his ancestral homeland for the last 14 years. “I can’t imagine doing anything else,” he said, “It’s very important (the watchman program) because people from all over the world come here.” 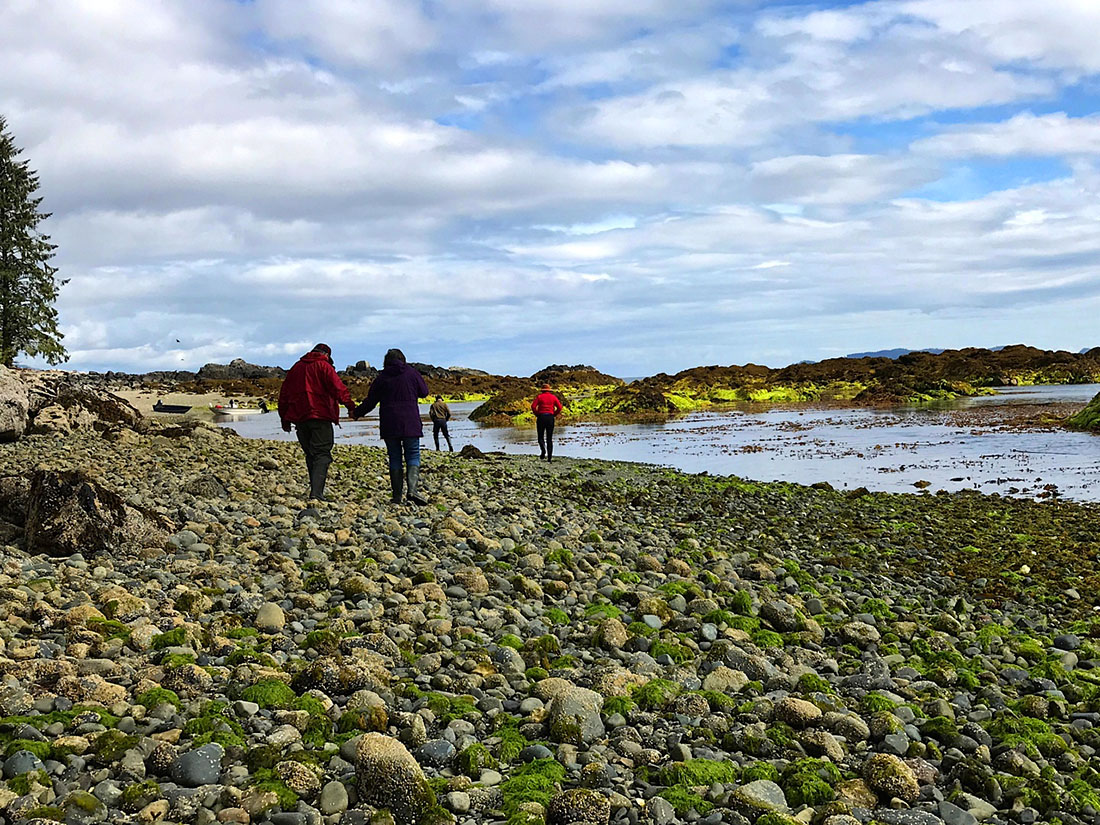 Although Carter’s family had a long connection to the program, she has only been a watchman for three years and at first wasn’t sure she was cut out for the lifestyle. “My grandparents were watchmen from 1987 to 1999. My grandfather’s ashes are scattered near one of the poles on Windy Bay,” Carter explained, “What surprised me the most was that I survived my first season!” These are isolated cabins with no cell phone coverage, Wi-Fi or telephones. Electricity is solar-generated and the toilets composting. Showers are cold on cloudy days. And then there are the ghosts.

“I’ve heard the voices there, the crunching footsteps on gravel.”

Hearing sounds with no apparent human sources have frightened many at T’aanuu Llnagaay (Tanu) but we’ve been assured the spirits mean no harm. 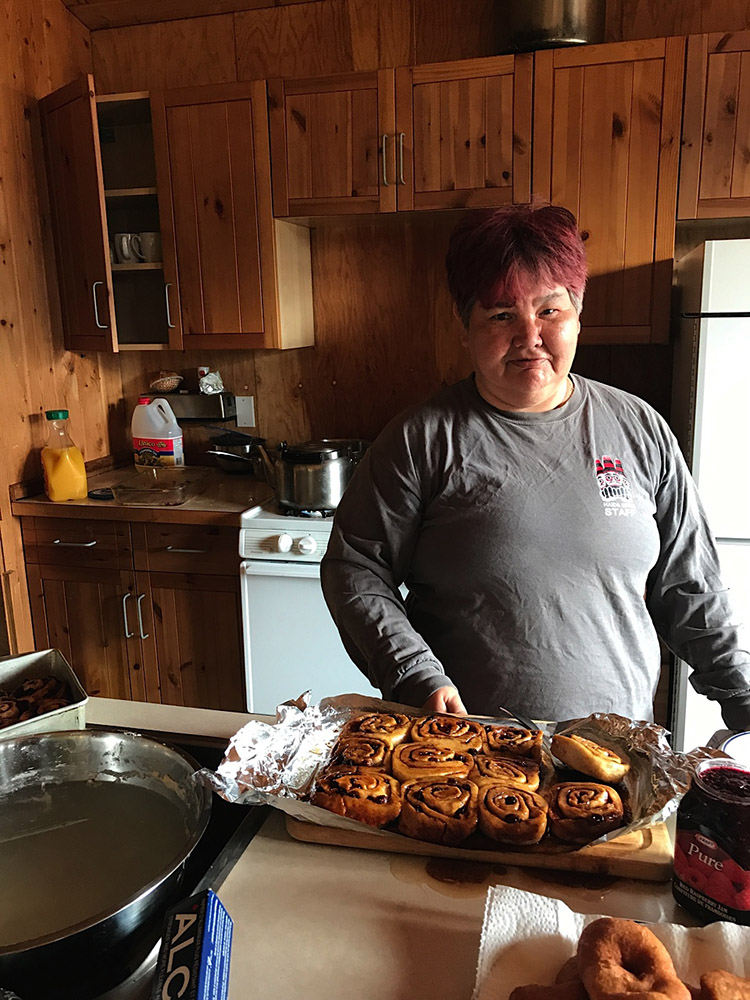 We arrived at Tanu after giving Watchmen Mary and Walter Russ forty-five minutes notice – the time we later learn is needed for Mary to whip up a batch of her famous cinnamon buns. The place may have ghosts but Mary’s hospitality put me at ease instantly.

Mary and Walter’s granddaughter played nearby, her game’s ‘Itsy Bitsy Spider’ providing a musical backdrop as Mary explained the secret to her buns is in the dough. “I’ve shared the recipe (with other watchmen) but I don’t know if they can recreate them.” 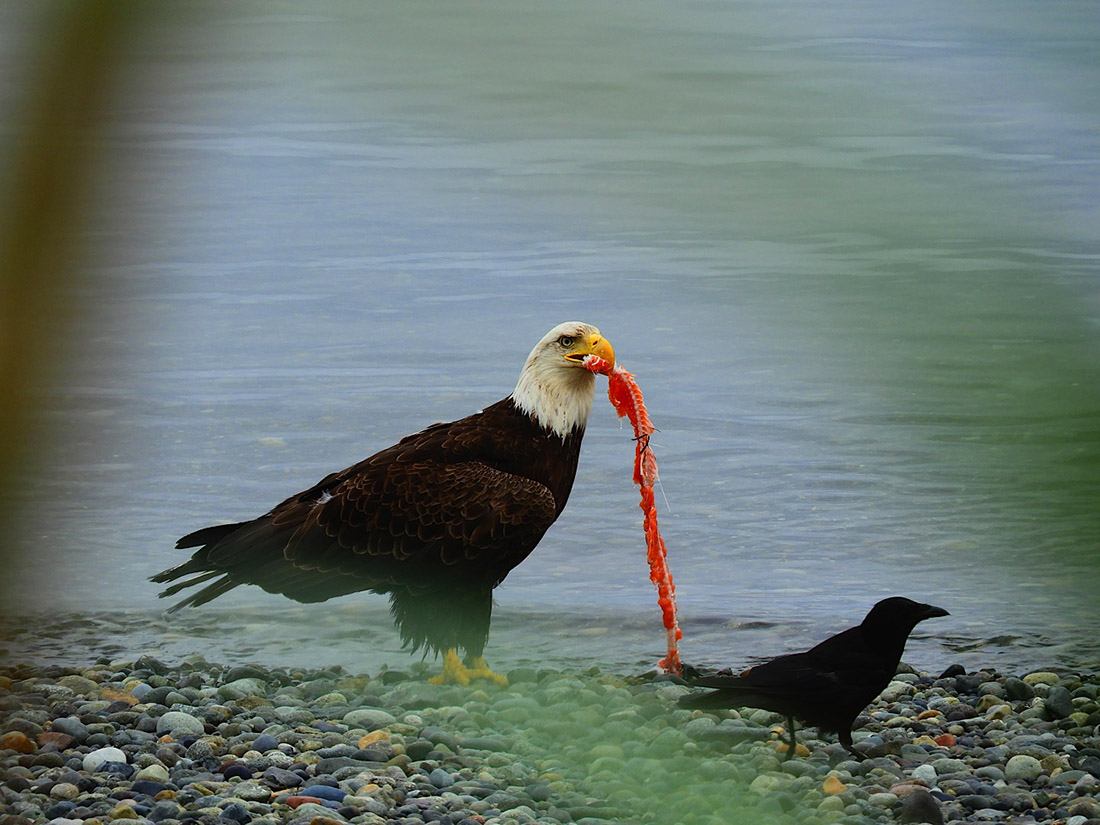 While watchmen have their food paid for as part of their contracts, Mary’s baking is her gift to us. Some tour operators donate ingredients but the love is all Mary’s. As she pushed some of her Haida fry bread towards me, she said, “Have another,” giving me good reason to load up on carbohydrates. I know this is one coffee break I won’t forget.

Like those who came before me, I’ll be saying my time with Haida Gwaii Watchmen was the best part of my trip!

Want to know more about the Watchman program?

The origins and evolution of the Watchmen program for Coastal First Nations are explained here in detail. 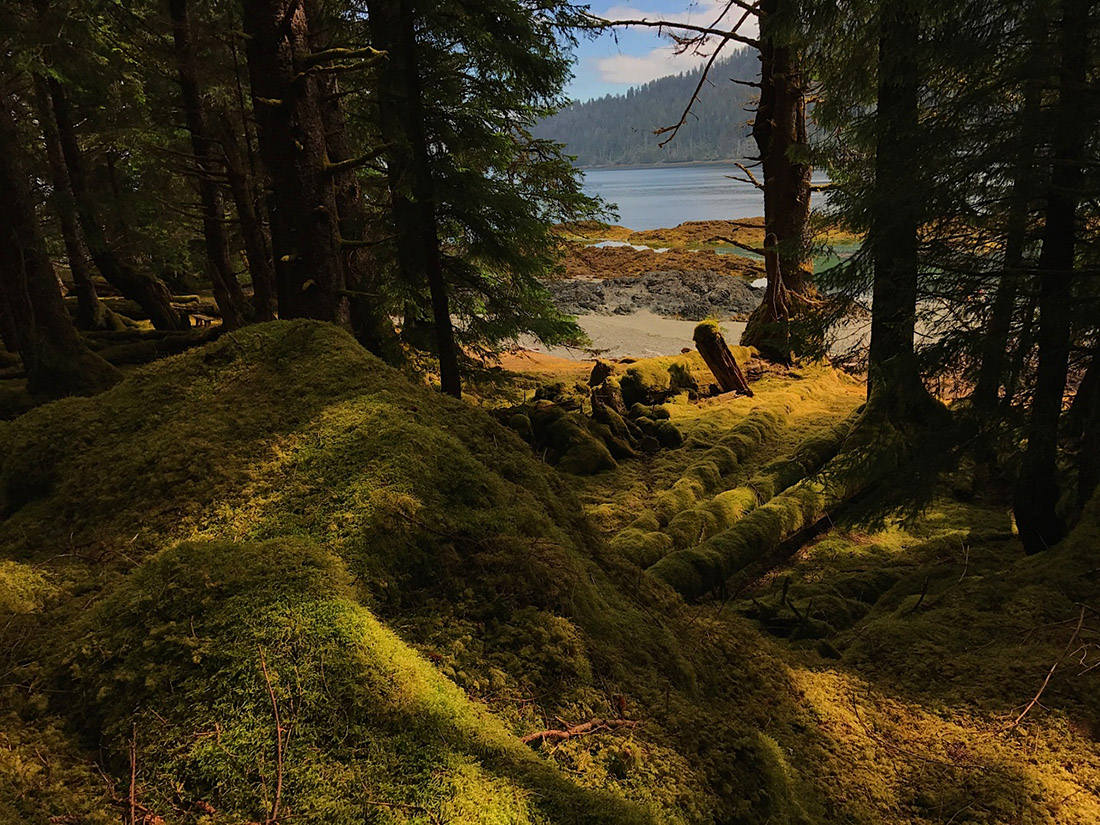 Visitors can see evidence of long houses at Tanu and hear tales about ghostly sounds.
. . . . . . .

Unless you are a skilled mariner, plan to go with an organized tour. Haida Style Expeditions offers day trips to several of the Watchman sites.

If you are doing a multi-day trip stay near Sandspit where many tour operators depart from. Bayview Garden B&B offers hostel rooms as well as B&B rooms.

Visit the Haida Heritage Center at Kay Llnagaay. The museum offers history and demonstrations of Haida culture. Enjoy lunch in the Kay bistro – it’s not just for museum visitors so you’ll get a sense of the community.

Editor’s Note: Carol Patterson was a guest of Haida Style Expeditions, but it did not review or approve this article. Also check out Mist enshrouded isles & vibrant Haida resurgence. We would love to hear from you. If you have any comments please submit them using the form below. 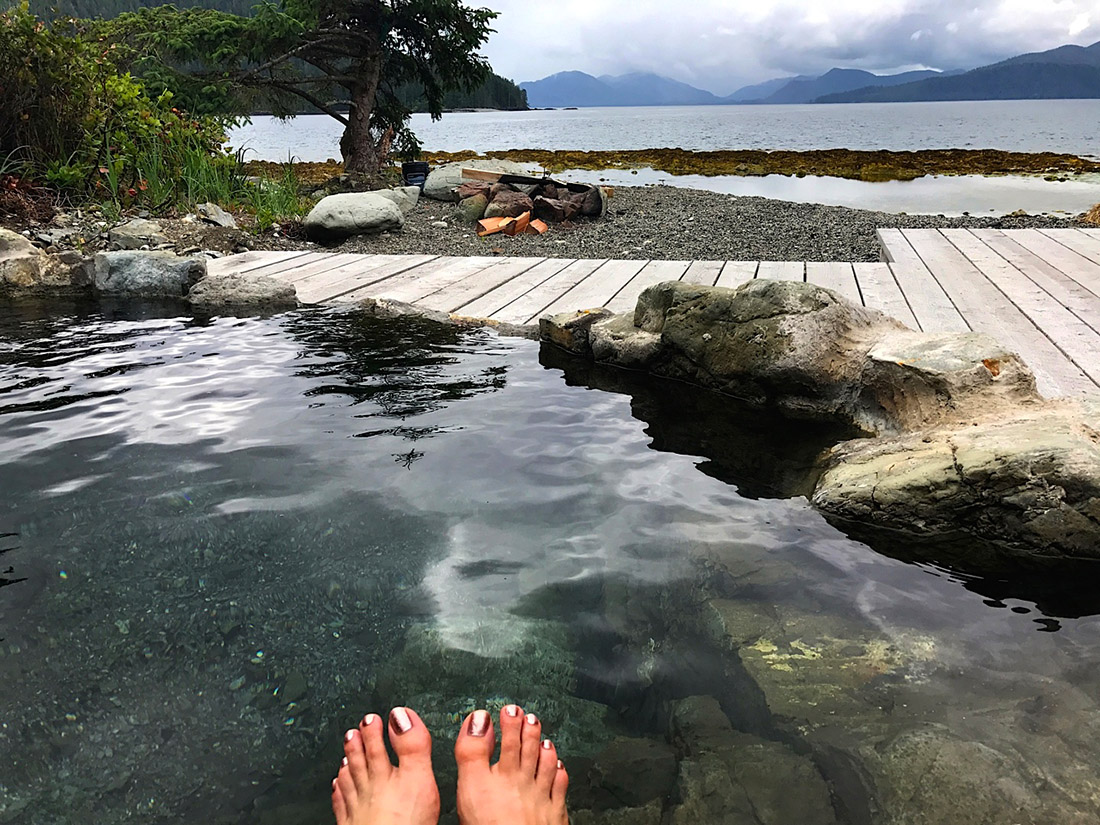 Watchmen welcome visitors to the Gwaii Haanas hot springs, a welcome respite from a long journey.
. . . . . . .

Previous
Great Trails Across Canada
Next
Indigenous Tourism in Ottawa