Nineteen species of hawks, falcons, eagles and vultures have been recorded migrating past here. One of the best places to view them in fall is at Port Burwell Provincial Park, two hours southwest of Toronto and an hour south of London, Ontario.

Fall mornings are best – just after dawn until mid-morning and especially after a cold front has rolled through. That’s when park visitors gather on the beach or in the beach parking lots to watch the migration. Some days, the birds pass by at tree-top level. Other days, they are high in the sky. On a good day and with a pair of binoculars, you’ll see birds everywhere.

The bulk of Broad-winged Hawks pass through in mid September but the month of October produces the highest number of species on any given day. Sightings of ten or more species of hawks a day are not unusual. Peregrine Falcons peak in early October, Turkey Vultures in mid-month and Red-shouldered Hawks in late October. The massive Red-tailed Hawk migration occurs later, in early November, when thousands fly over daily. Bald Eagles can be seen any time during the fall migration period from August to December. In December, heavy snowfalls in the north bring the last of the migrants through, including Northern Harriers.

Turkey vultures scouring the ground for fresh carcasses – a close look at two of the carrion (meat)-eating raptors. Turkey vultures are often identified by their conspicuous red heads, bare of any feathers. Researchers believe their bald heads help keep them clean as they dig through their meals – photo courtesy of Ontario Parks

A free brochure called Marvels of Migration is available from the Port Burwell Provincial Park office at the park entrance. It describes the different species and lists their silhouettes to help you identify them in flight.

Milder fall temperatures in southwestern Ontario attract campers to provincial parks along the Lake Erie and Lake Huron shorelines. One of the best group campsites in Ontario’s provincial park system is found at Port Burwell Provincial Park. Staff call #402 “the site with the million dollar view”. To reserve a group camp site, contact the park directly. You don’t have to camp to enjoy the fall migration though. Park day passes are available too. 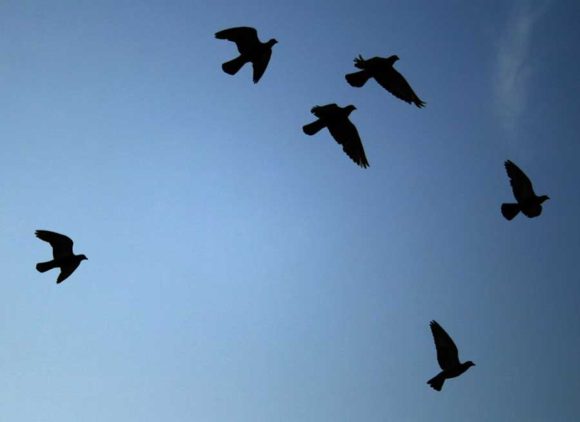