Getting Canada’s fitness pride back …
…….

It’s tempting to curl up on the couch in winter but I set out to see if Vernon’s Winter Carnival – one of Western Canada’s oldest – has enough going on to get people going out. 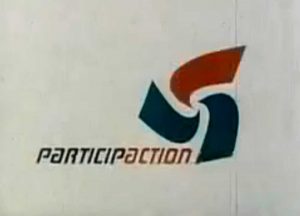 Back in the ‘70s Canadians were aghast to discover as a nation we were not fit. ParticipACTION launched a 1973 commercial declaring a 30-year-old Canadian was as fit as a 60-year-old Swede. I’m not sure the two events are linked but that year my uncle in Regina bought a new car and the dealership tossed in a free pair of Nordic skis.

Practical prairie denizens were puzzled about this foreign sport and the red wooden skis eventually fell into my teenage hands. I learned to glide across the gentle hills of Regina’s Wascana Park, enjoying the workout even if I didn’t ski as often as I should. I wondered if other Canadians were doing better and if our country can hold our head up around Sweden. The research wasn’t encouraging. According to a 2016 study, Canada has closed the gap with Sweden but both countries are losing ground as children eschew exercise for screen time (Canada’s kids got a D- for level of physical activity, Sweden got a D). 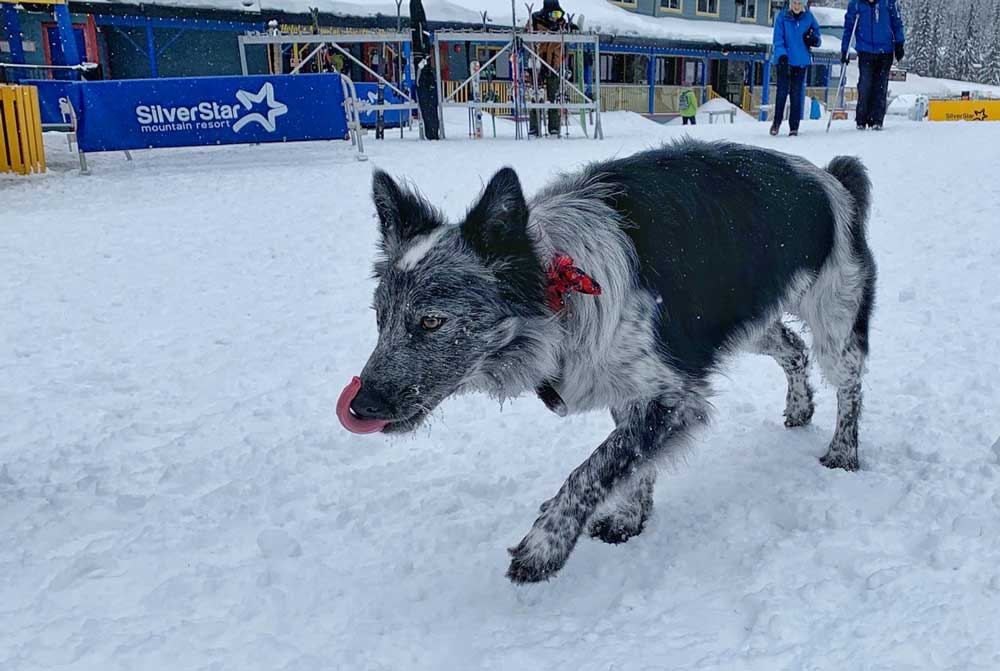 With dozens of events over ten days at Vernon’s Winter Carnival in February there’s lots to choose from for all ages. At the Over The Hill Downhill teams of four skiers compete in combined age categories of 65 to 225+ years. BeerCan Beiner draws on Nordic inspiration (the 54 km Birkebeinerrennet) but shortens it to an alcohol-imbibing friendly 5 km with three stops to quaff craft beer. I skipped the ale trail and headed to SilverStar Mountain Resort – a family-friendly ski hill – with each building painted with the five colours on the resort logo. Main street looks as cheerful as the inside of a crayon box. A short distance from the resort village is Sovereign Lake Nordic Centre with 105 km of groomed trails. It seemed the perfect place to pick up the fitness challenge but unfortunately a truck had jackknifed across the road blocking access. Other drivers gestured to turn back towards town. 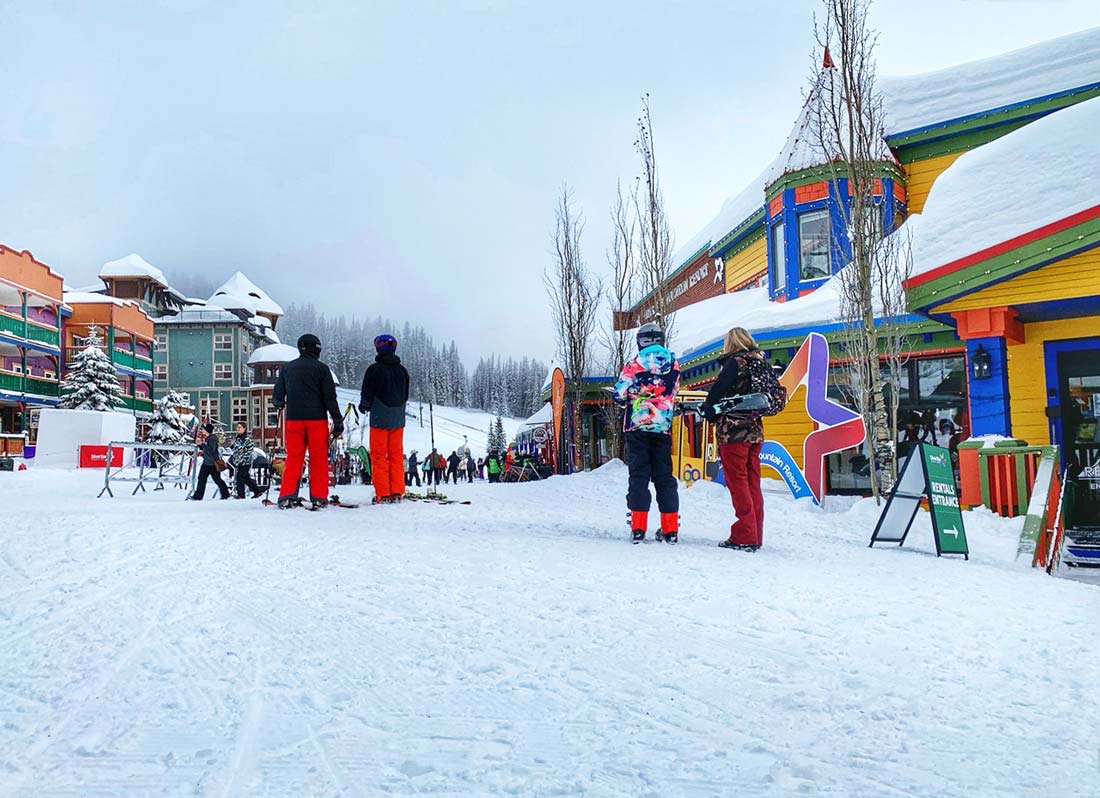 Too late to try skiing somewhere else I headed to the ice sculptures in downtown Vernon and the crowning of SilverStar queen and princess (the unofficial launch of the carnival). Beauty pageants have lost favour in recent years but not in Vernon. I counted 21 tiaras in the crowd waiting for winners. The 2020 festival celebrated its 60th anniversary with a groovy sixties theme and a woman who looked like she might remember the ‘60s wore a beauty queen banner slightly faded with age. “I was crowned in 1975,” she beamed with a smile befitting a community ambassador. Several of the younger winners from nearby towns wore banners proclaiming them ambassadors (not princesses) and there was one young man amongst the smiling female faces. I watched a crown carried into the plaza on a red velvet cushion amidst much Okanagan royal pride. 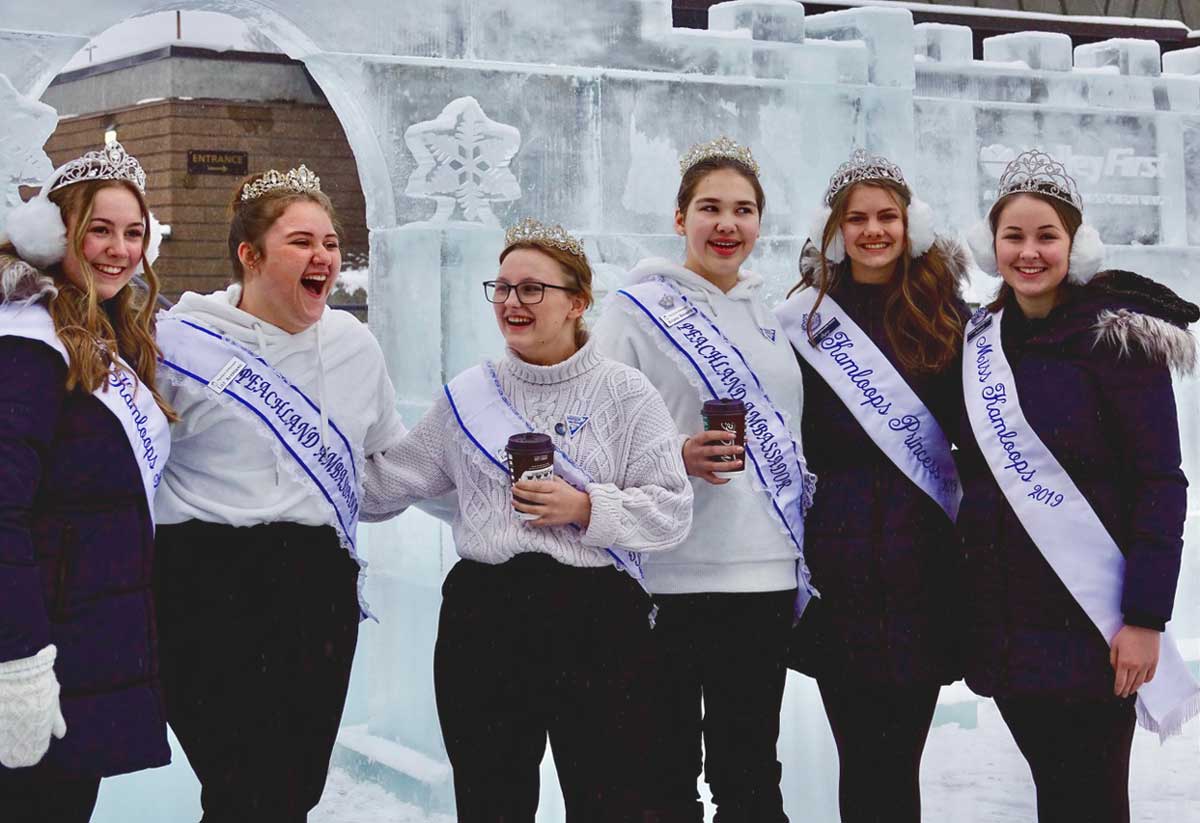 The next day, I got up early for a balloon ride over Vernon. Usually the British Columbia Balloon Festival coincides with the Winter Carnival’s opening weekend but a lack of funding this year meant OK Ballooning pilot John Klempner had the skies to himself. 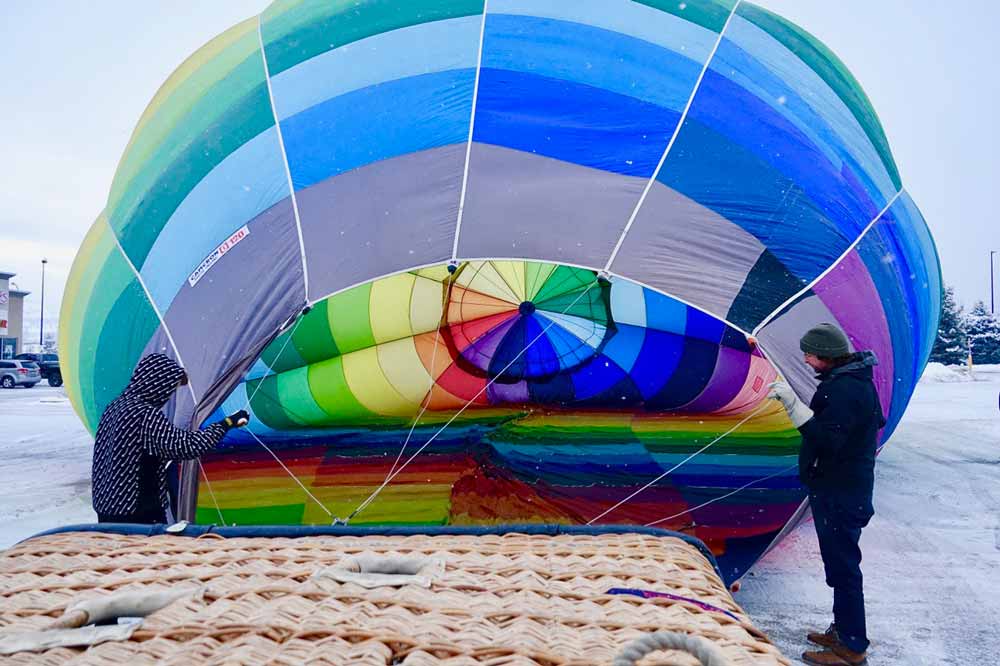 I’m not convinced standing in a balloon while we floated over Swan Lake counted as exercise but my heart rate kicked up as we lost the wind. Klempner turned on the balloon’s burners to climb higher as we searched for a breeze. Finding only the slightest whisper we descended into the lumberyard of a home improvement store.

I was nonplussed at Vernonites calmly loading “two-by-fours” into their cars while we parked a hot air balloon next to shrink-wrapped plywood. Perhaps their outdoor focus generated a genuine sangfroid. 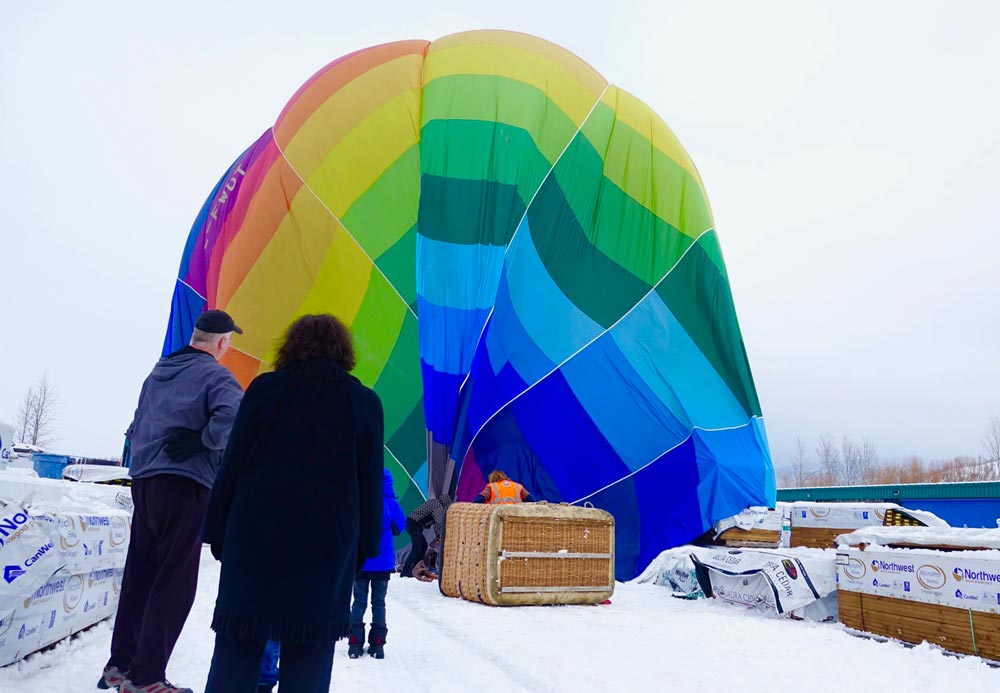 Back on solid ground it was time for the parade. Young hockey players sported fake afros and psychedelic-coloured sunglasses. A determined silver-haired woman stopped her candy tossing to ask if I’d like to join her square dancing group. I declined, wanting to save my legs for skiing. 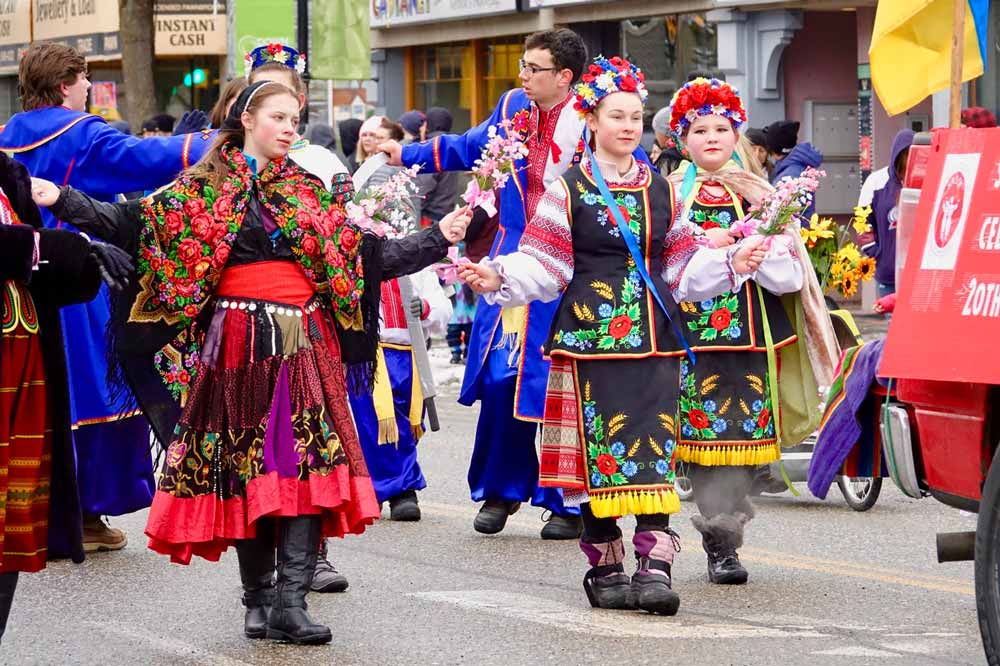 Soon it was time to find my rental gear. At Stussi Sport, a plucky and very fit woman sized me up and brought out boots only slightly less complicated to operate than the space shuttle. She suggested the new Okanagan Rail Trail that runs along Kalamalka Lake as a good place for cross-country skiing. 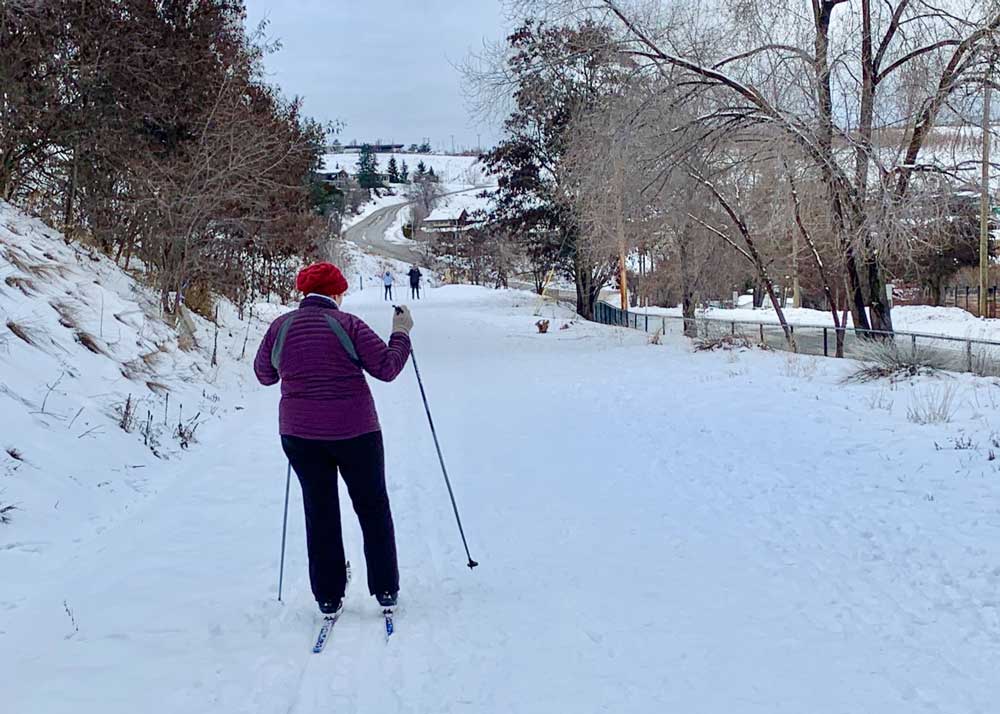 The snow was sticky but I snapped on my skis, determined to get back in the race with the Swedes. “You’ve got the right idea,” yelled a woman walking a stocky golden Labrador, “the snow gets better as you go further along.”

A quail scuttled across rocks overhanging the trail and a bald eagle swooped into a pine tree nearby as I pointed my skis into the tracks and glided off. I wasn’t sure if I had raised Canada’s standing as a fit nation but Vernon had got me outside in winter. It felt good.

Reward yourself for the outdoor activities at Ratio Coffee & Pastry for yummy donuts each Friday.

Editor’s Note: Carol Patterson travelled to Vernon in February 2020. She was a guest of Tourism Vernon but this organization did not review or approve this article.

Ottawa – The City that LOVES Winter